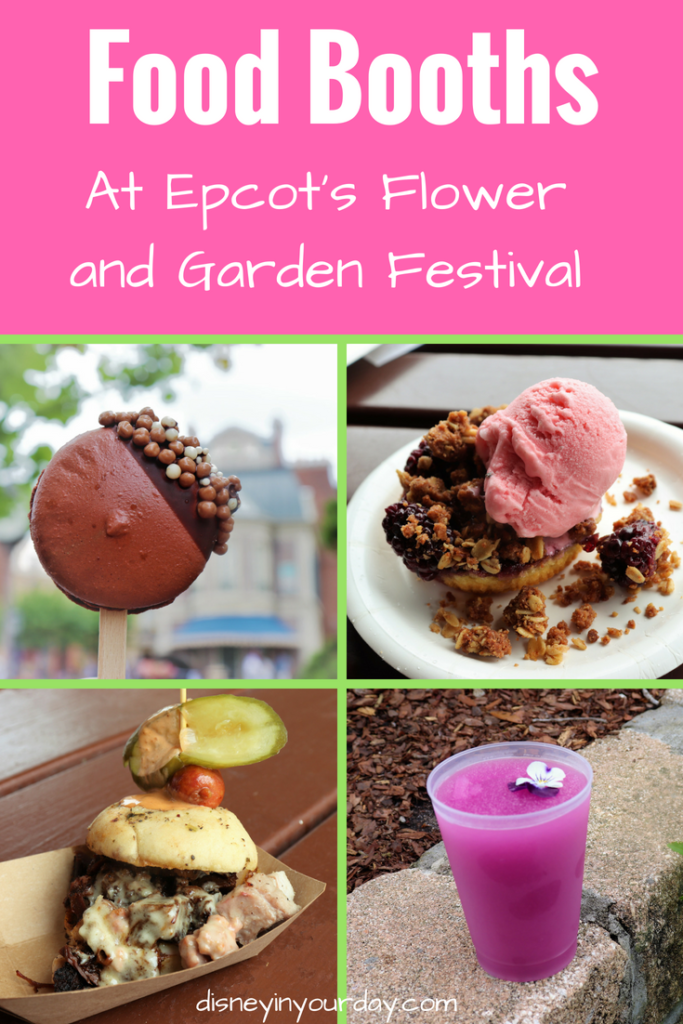 After our Disney Cruise from Miami, we decided we’d drive up to Orlando and spend 2 days in Disney, mostly so we could visit Epcot and Flower and Garden Festival.  What we didn’t anticipate was that it would rain almost the entire time we were there!  With a total of about 36 hours in Orlando, I think it was only not raining for 2 of those hours total.  It definitely makes it hard to travel the World Showcase and go to different food booths, but we persevered and did it anyway. With our two days we managed to try 1 item at all 16 of the Flower and Garden food booths this year.

And while I know there are only about 2 weeks left in the Flower and Garden festival, I’m hoping people will still enjoy this post – and maybe some of it will be useful when planning for next year’s festival! 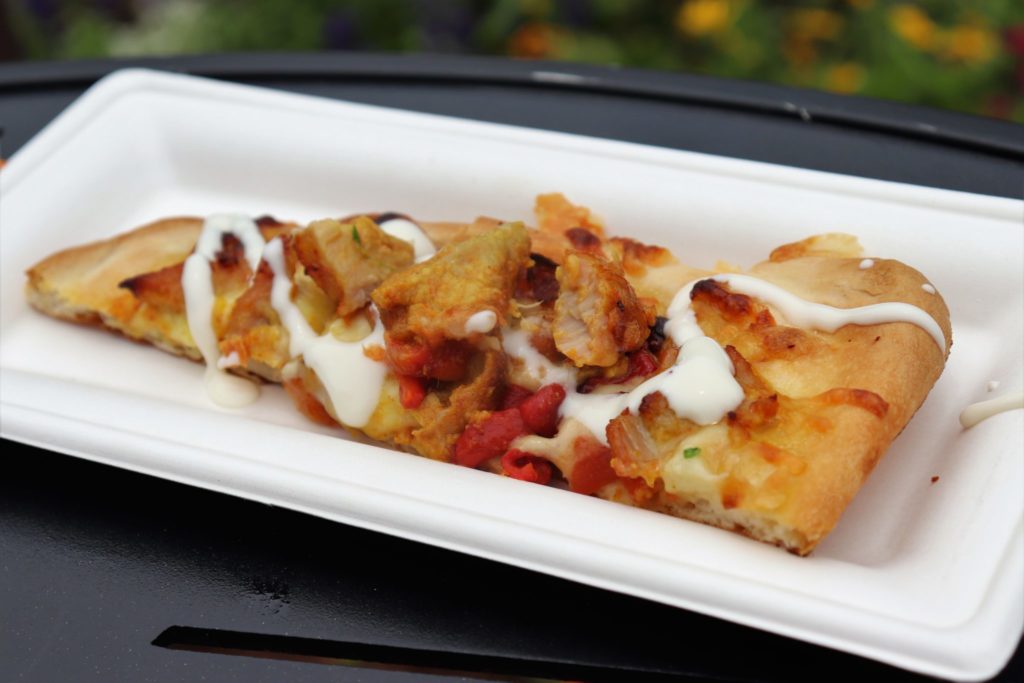 Honey Tandoori Chicken Flatbread (with white cheddar cheese, charred vegetables, clover honey sour cream, and micro watercress): This was probably the best booth of the festival. The flatbread was really good, with an interesting combination of savory and sweet. 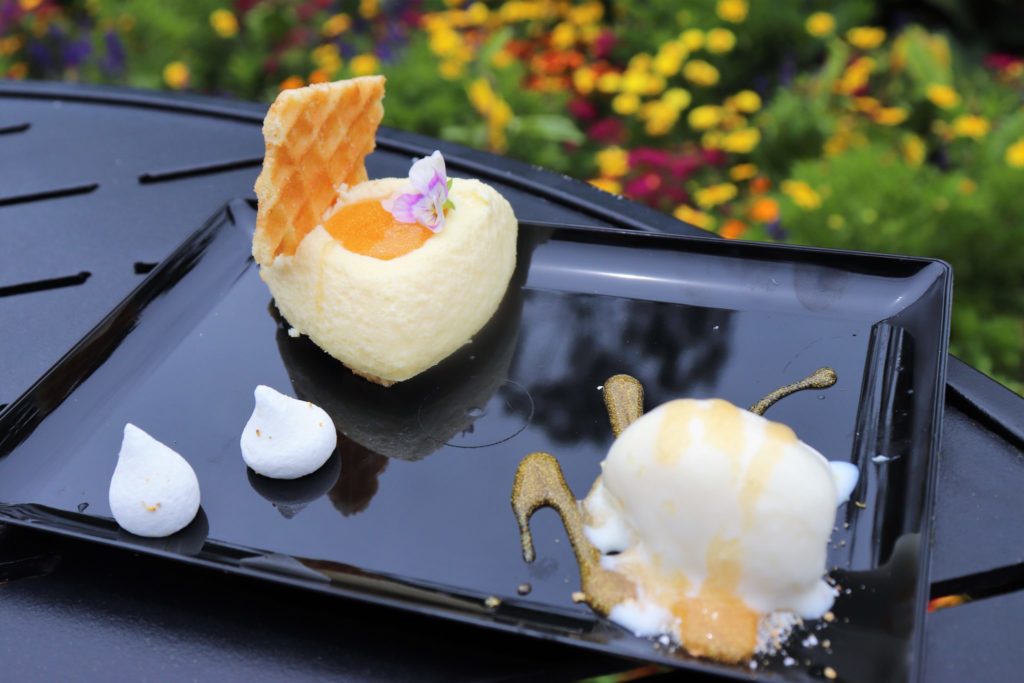 Local Wildflower Honey-Mascarpone Cheesecake (with orange blossom honey ice cream garnished with fennel pollen meringue kisses):  Best dessert we tried, and I’m not even a huge cheesecake fan.  The ice cream was really incredible, and the cheesecake was good too.  Plus the honey literally glitters, so it’s pretty gorgeous. 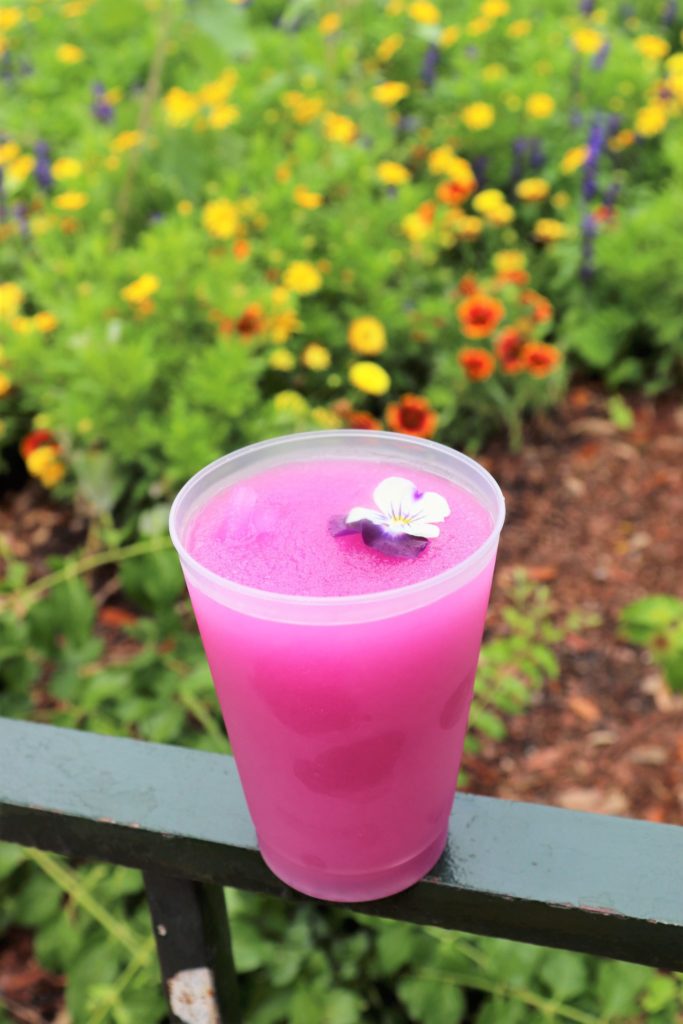 Frozen Desert Violet Lemonade:  The one must-try item at this booth, funny enough, isn’t pineapple.  This frozen beverage is beautiful and a delicious combination of sweet and tart.  It’s also non-alcoholic. 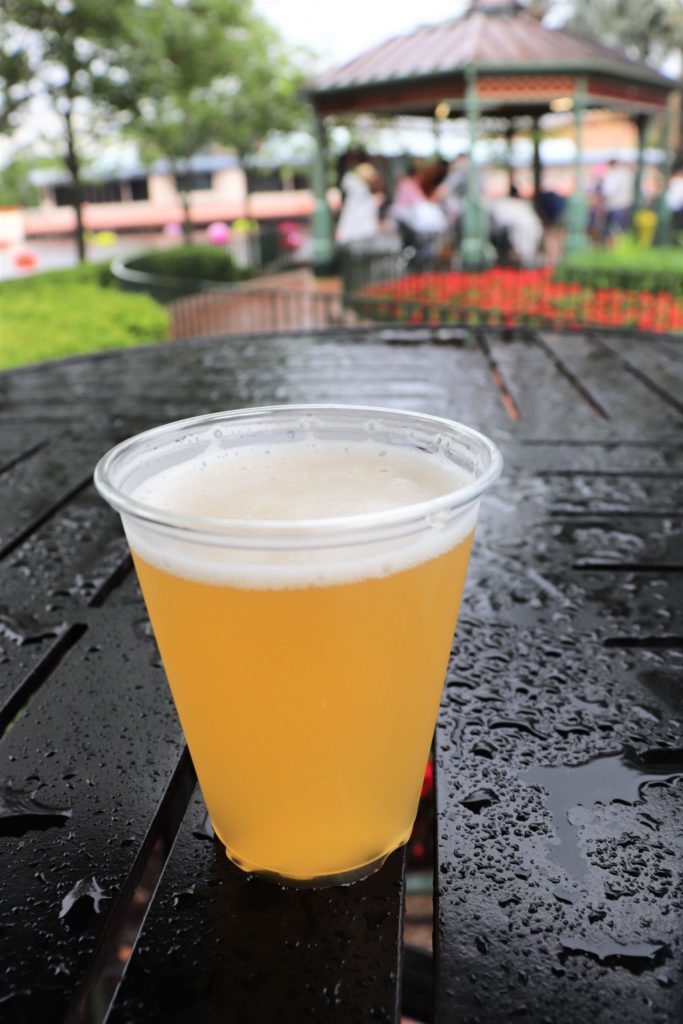 Golden Road Brewing Tart Mango Cart Wheat Ale: I enjoy fruit wheat beers, so this one didn’t disappoint. It was a light one, good for summer, and had subtle mango flavor. 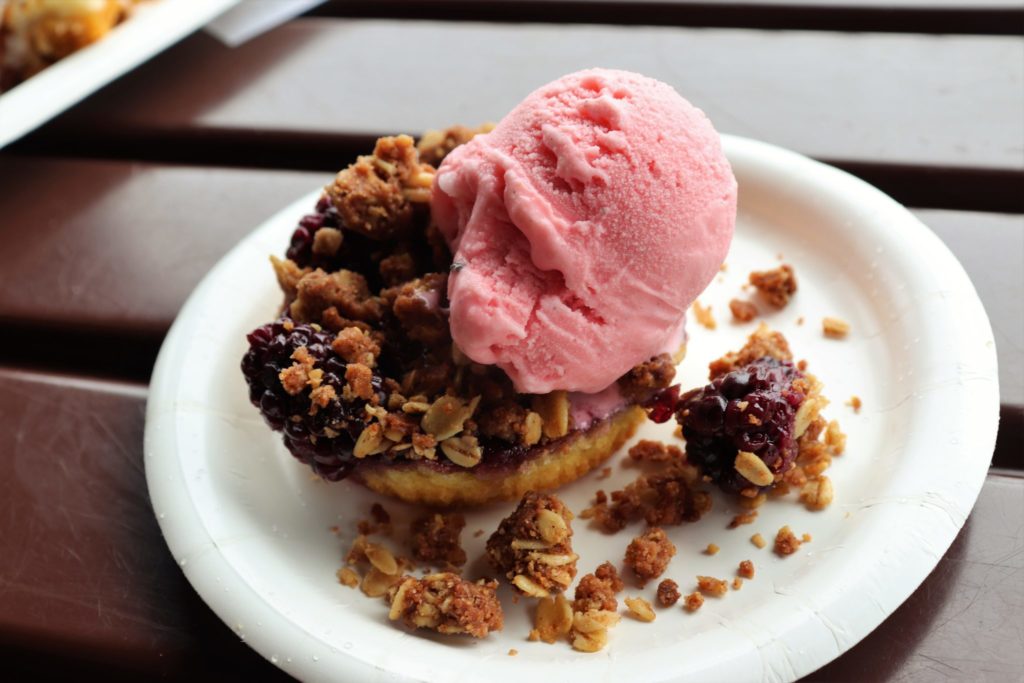 Warm Wild Berry Buckle (with Pepper Berry Gelato):  This was another very tasty dessert, with lots of delicious blackberries.  Once again pairing it with a unique ice cream, like the cheesecake above, added a lot to the dessert. The gelato was really smooth and tasty, with just a hint of spice from the pepper (but definitely not overpowering or noticeable). 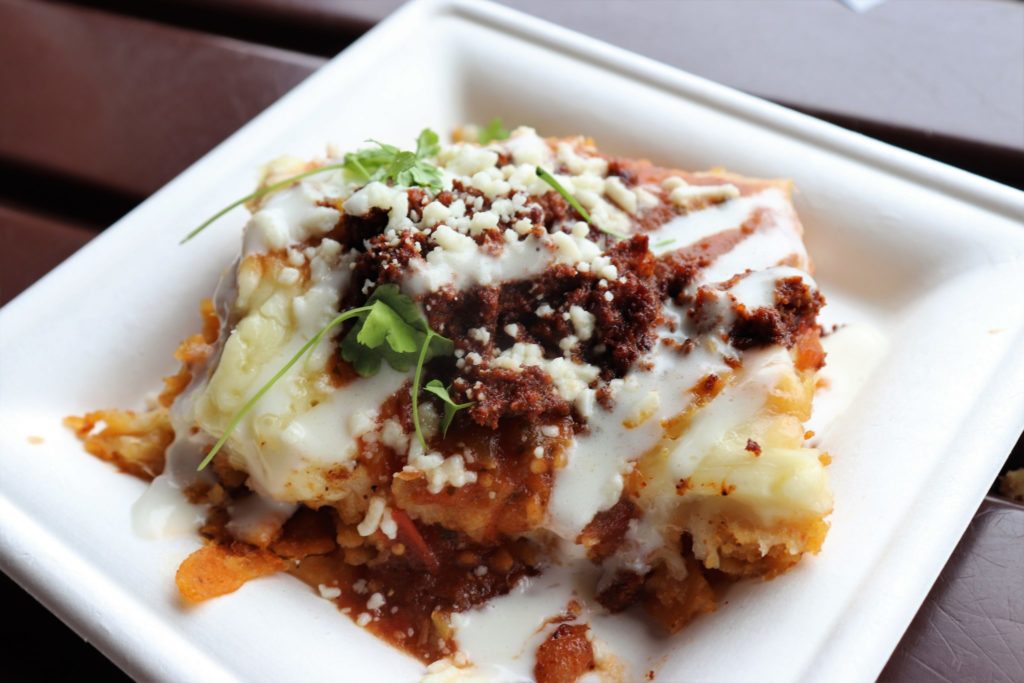 Chilaquiles (served with ranchera sauce, chorizo, mexican cream, and cotija cheese): I’m not sure a food booth at Epcot is ever going to produce really amazing Mexican food, but this was a decent bite. The portion size was pretty big and it was tasty enough, if not something to really stand out. 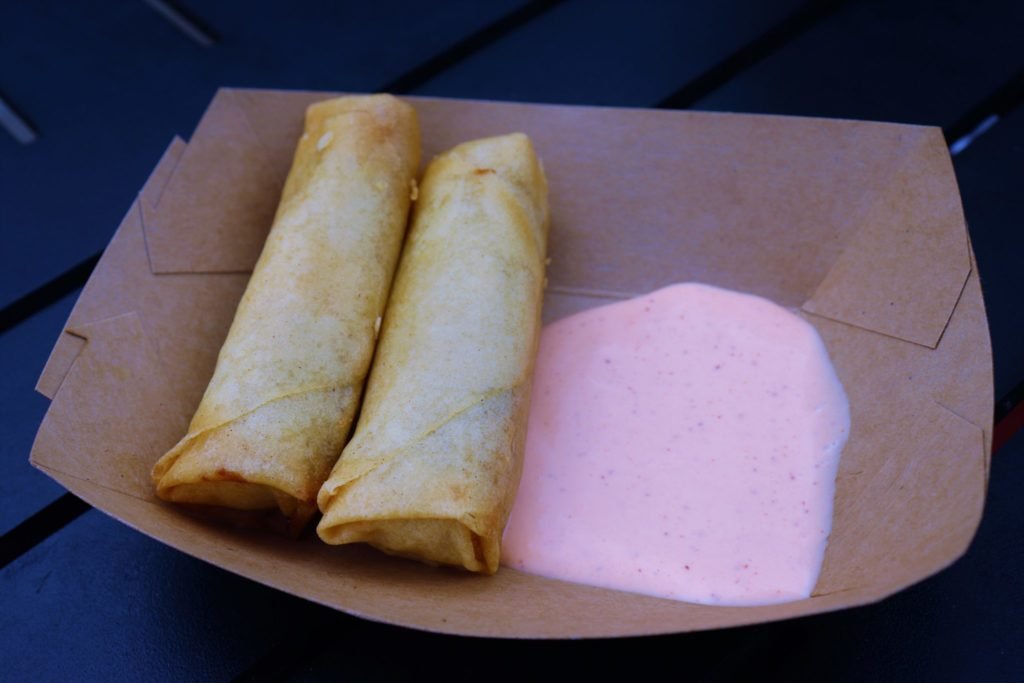 Vegetable spring rolls:  The spring rolls were pretty typical, and would be totally unimpressive on their own, but when paired with the spicy sauce it was served with they were quite tasty.  Basically using them as vessels to scoop up that sauce was what made this dish worth it. 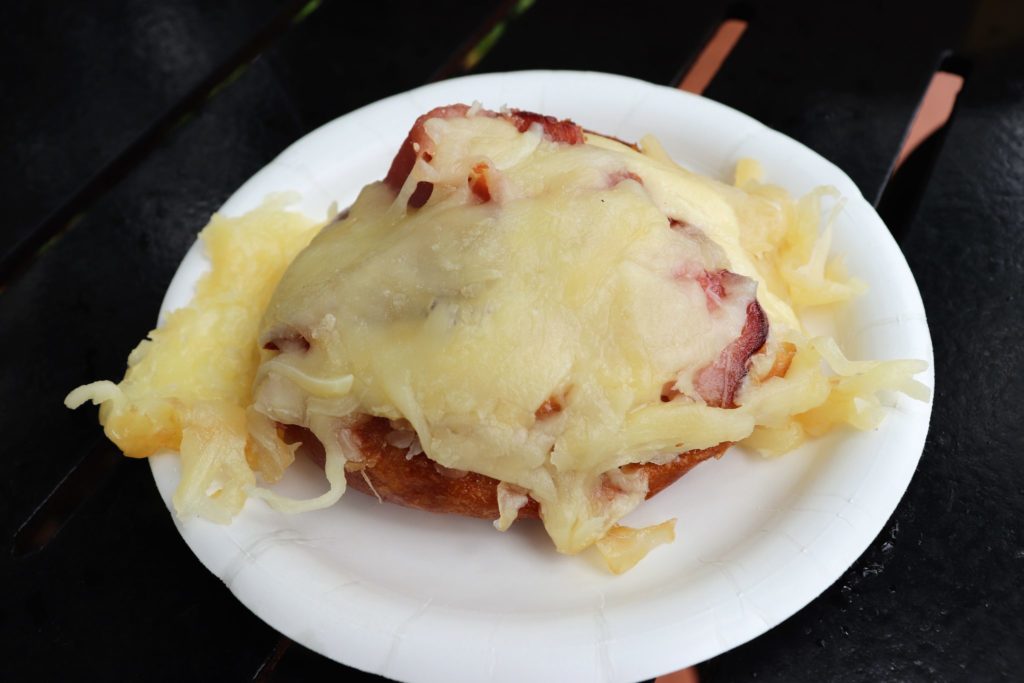 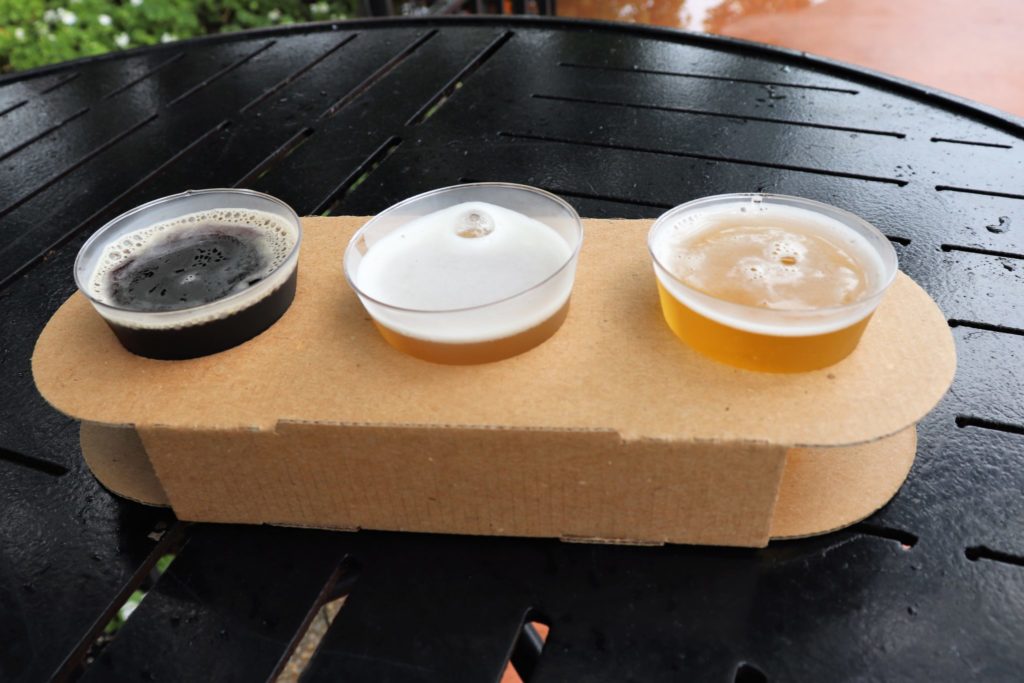 Beer Flight (Paulaner Original Munich Lager, Ayinger Brau-Weisse Hefeweizen, Kostritzer Schwarzbier Black Lager):  I think I’d tried two of these beers before at Epcot, probably at one of the other festivals.  The Munich Lager is decent, if nothing special.  The hefewizen is really pleasant, but I’m a real fan of hefes in general. The black lager is something a little different.  I’m not into dark beers with porters and stouts, but this is kind of a good middle ground as it doesn’t have quite as strong flavors as those. 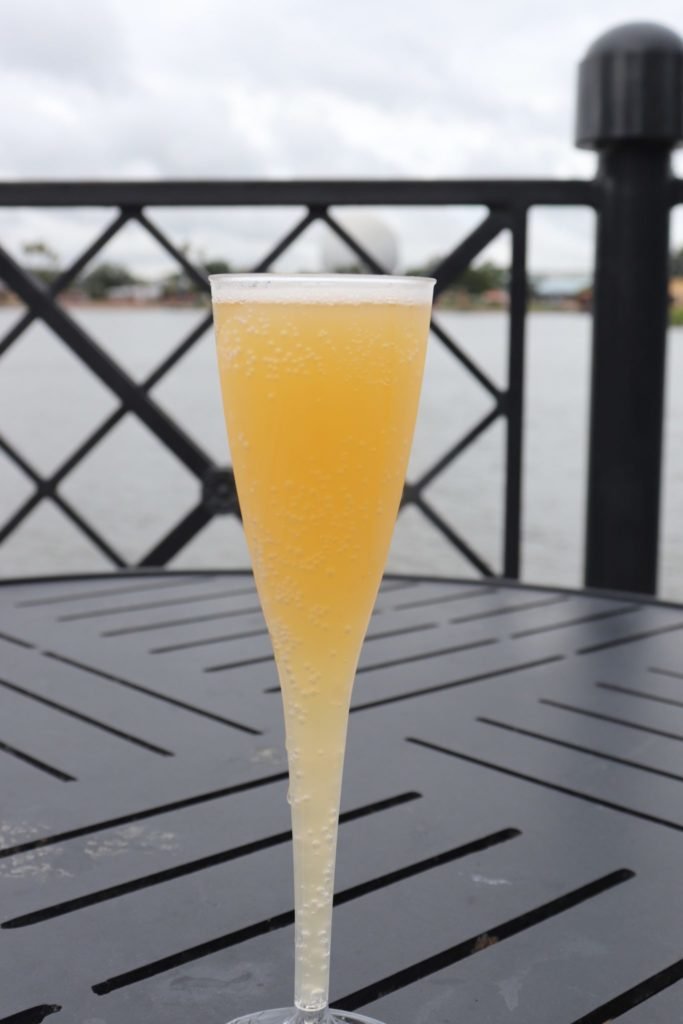 Bellini (Sparkling Wine and Peach Puree):  Italy is somewhat notorious for producing mediocre and extremely overpriced food, so we avoided it here and went with a Bellini.  It hurt a little to pay $9 for a bellini after having them at brunch on the cruise for $4.50, but it tasted good with a rich peach flavor that had a good bit of sweetness to it. 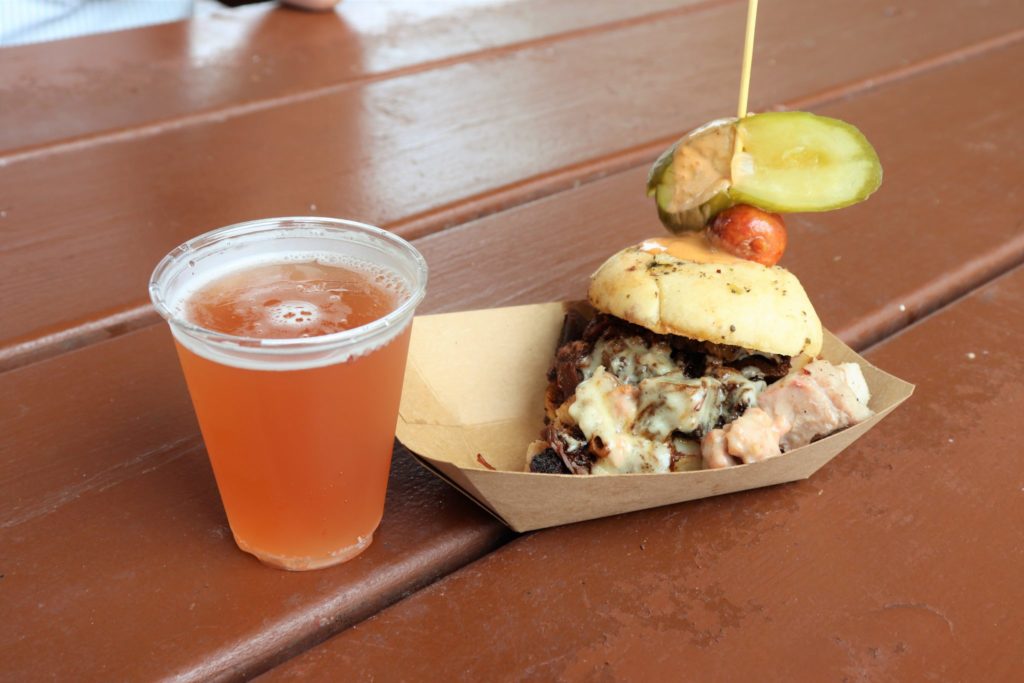 Beef Brisket Burnt Ends and Smoked Pork Belly Slider (with Garlic sausage, chorizo, cheddar fondue, and house-made pickle):  I’d heard a lot of good things about this in reviews, but it didn’t do much for me.  It just felt likew ay too much going on, and not enough cheese.  And the pickle was a sweet pickle which I wasn’t a fan of. You also can’t really pick this up and eat it like a slider so we had to fork and knife it. Again, not horrible, but for the $7 price point I wouldn’t get it again.

Central 28 Brewing Co. Sunshine Greetings Orange Hibiscus Wheat Ale:  This was a pleasant wheat ale with a hint of orange flavor. I’d get it again but wouldn’t go out of my way for it. 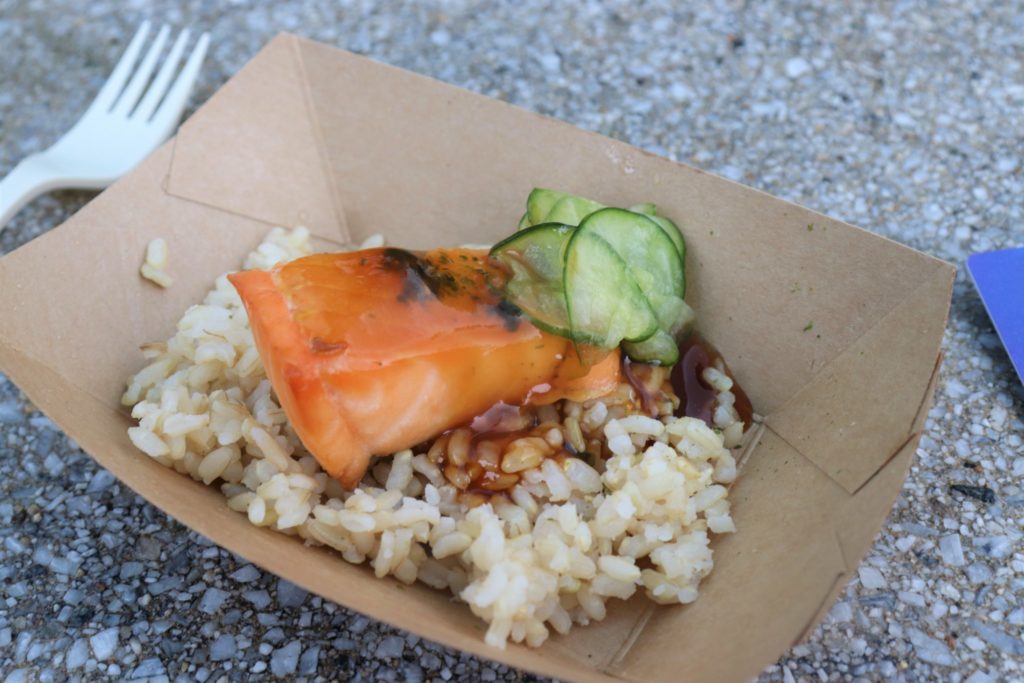 Teriyaki Salmon (with Furikake-seasoned brown rice):  I will say it was a bit hard to enjoy this as we got it during the height of the rain, so it was pouring at the time. We grabbed it and ran undercover with everyone else outside the shop in Japan and had to eat it standing up.  It was good, just typical Teriyaki Salmon.  I know everyone is about the frushi in Japan but it feels really overpriced and gimmicky at this point for what you get, and I’ve had it several times. 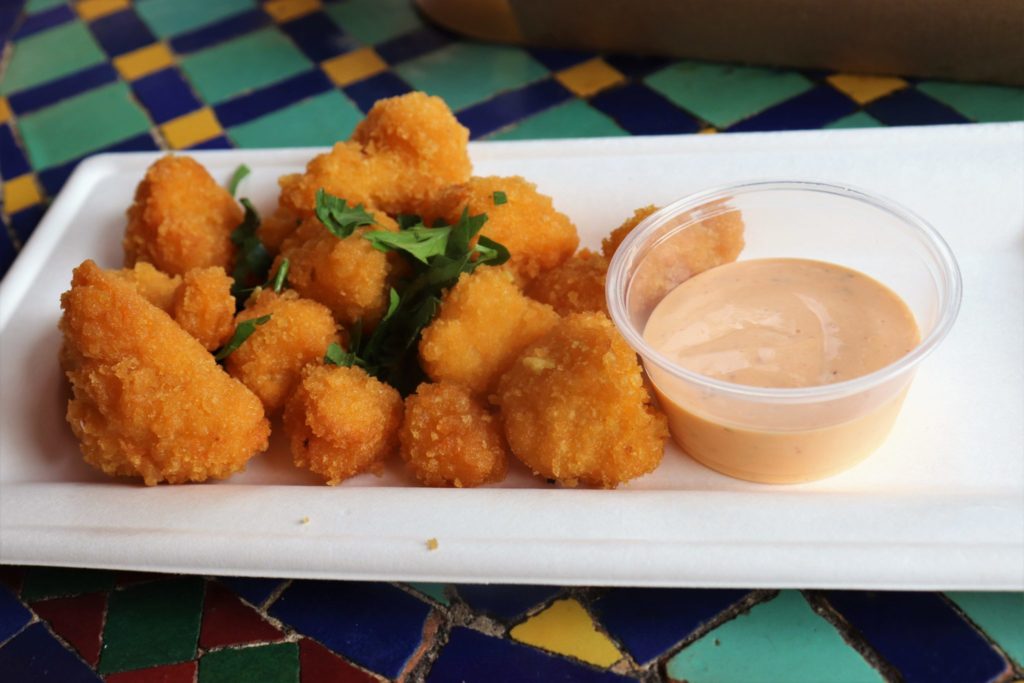 Fried Cauliflower (with capers, garlic parsley, and chili-ranch sauce):  This is a fairly simple dish but surprisingly good!  The breading on the cauliflower was crisp and and tasty, and the sauce was delicious.  Kind of like eating chicken bites but you can convince yourself it’s healthy because it’s cauliflower!  A good option for vegetarians. 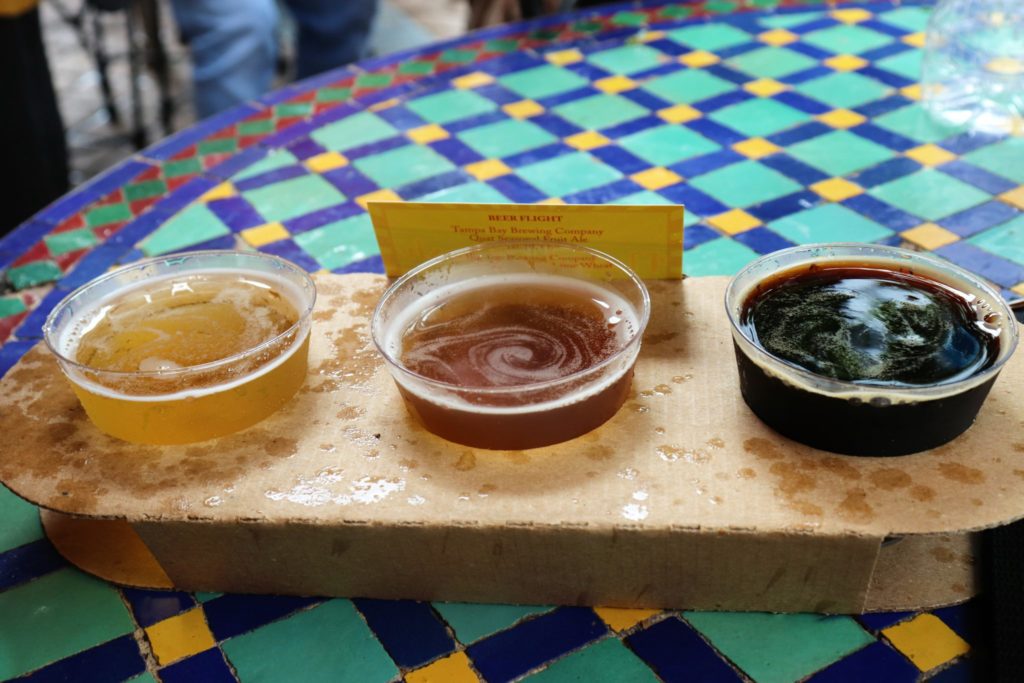 Beer Flight (Tampa Bay Brewing Company Quat Seasonal Fruit Ale, Big Top Brewing Company Conch Republic Key Lime Wheat, First Magnitude Brewing Co. Monarch Milk Stout): Some interesting sounding beers here, so I wanted to try it.  I didn’t like the Quat as much as I’d hoped – it was rather sharp for a fruit ale. The Key Lime was probably our favorite, as it really did taste like lime.  The Milk Stout was decent but as I mentioned above I’m not big into stouts. I was hoping Jason would like it but he doesn’t like any of the ones that taste too much like coffee, which this one did a bit. 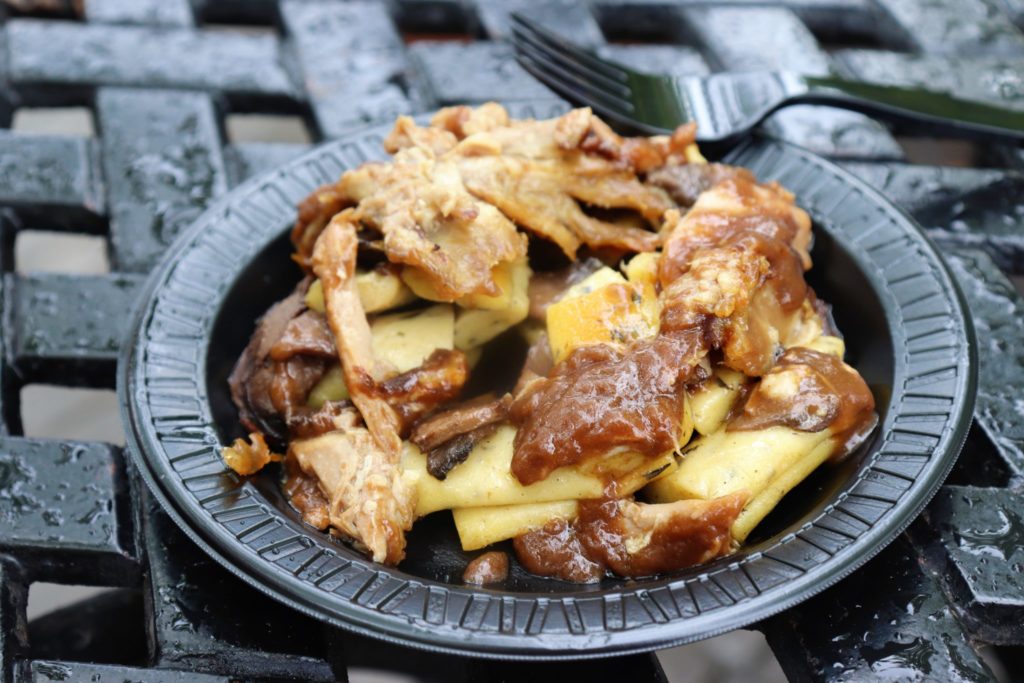 Confit de Canard aux Gnocchi a la Parisienne (Braised duck confit with Parisian gnocchi): Jason really wanted this and was very pleased with it. We didn’t know Parisian gnocchi was a thing, but he enjoyed it a lot, even more than the duck part of the dish, which was also good. 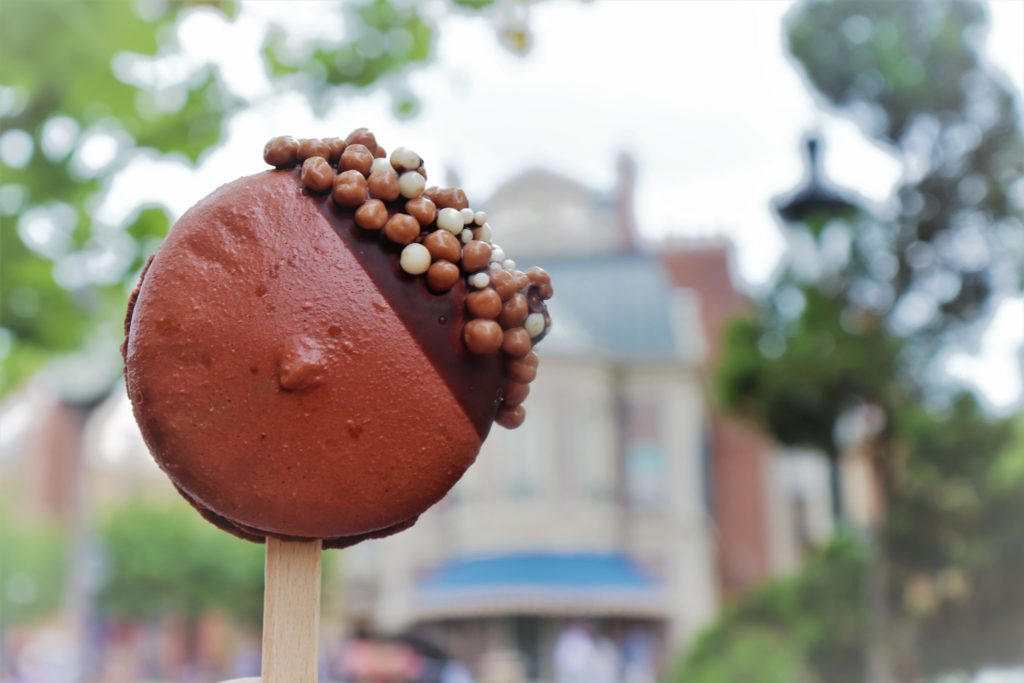 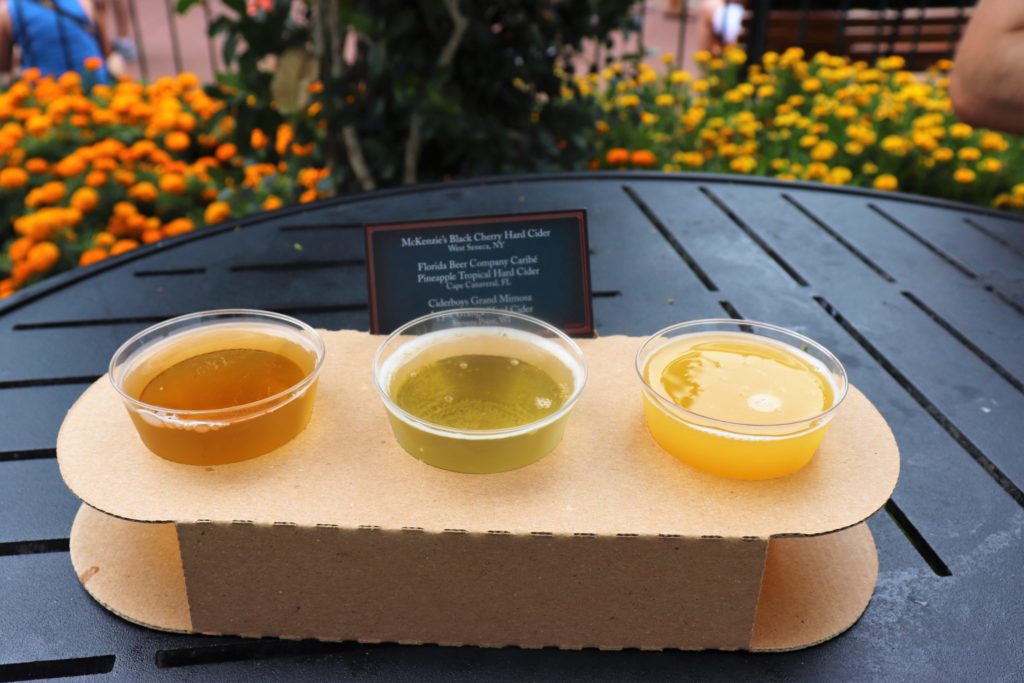 Hard Cider Flight (McKenzie’s Black Cherry Hard Cider, Florida Beer Company Caribe Pineapple Tropical Hard Cider, Ciderboys Grand Mimosa Apple Orange Hard Cider): We really enjoyed all three of these ciders – even Jason, who insisted before we ordered it that he “doesn’t really like cider.”  I’d had the black cherry before but I enjoy it for the fact that it’s a bit less sweet.  Jason loved the pineapple.  And my favorite was the Grand Mimosa, because it really did taste like a mimosa mixed with cider! Very refreshing. 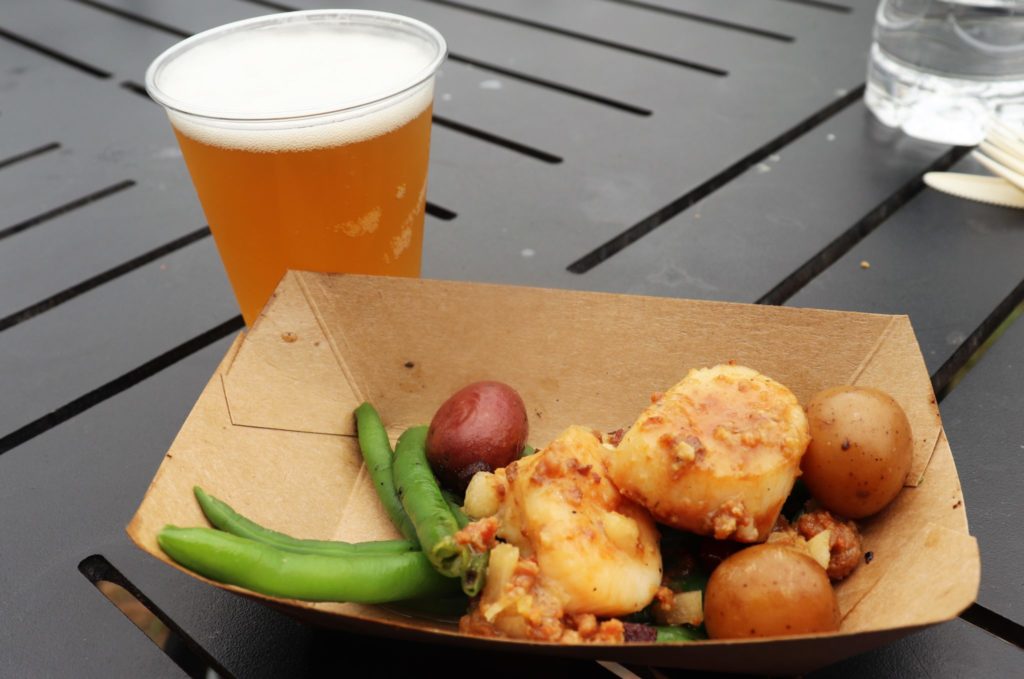 Seared Scallops (with French Green Beans, Butter Potatoes, Brown-butter vinaigrette, and applewood-smoked bacon):  We love scallops, and these were well done with a delicious topping.  The green beans and potatoes were good to have just to get more of that brown-butter flavor that had dripped off the scallops.

I’d say our top favorites were probably the scallops in Canada, Fried Cauliflower in Morocco, the Frozen Desert Violet Lemonade at Pineapple Promenade, and everything we tried at Honey Bee-stro.

Have you been to the Flower and Garden Festival food booths? What’s your favorite, or what looks best to you?