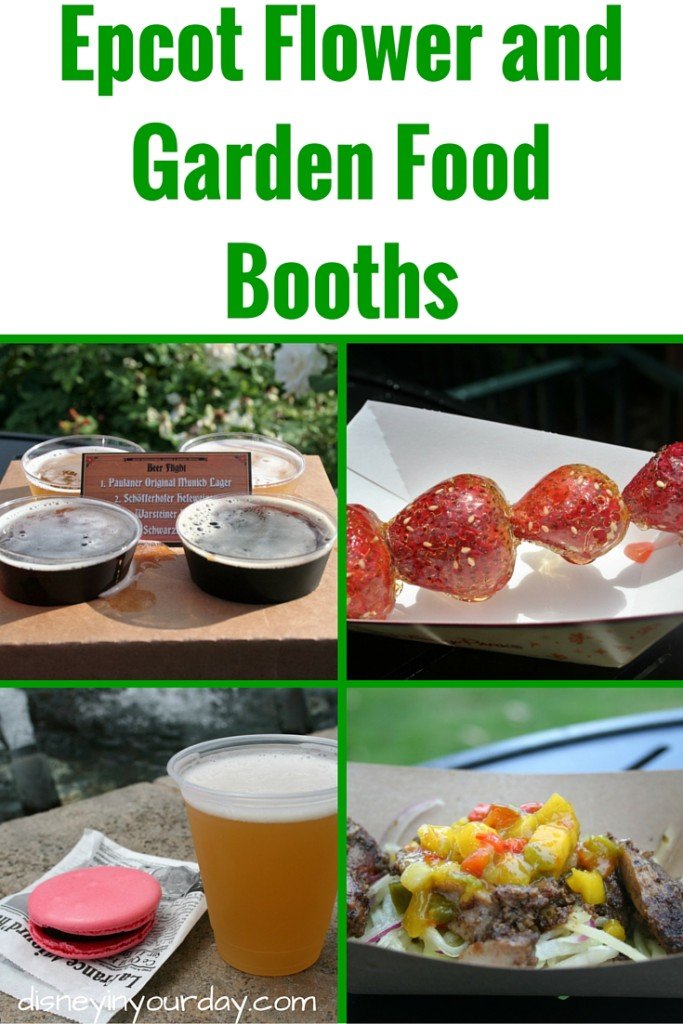 I love the flowers and the topiaries at the Flower and Garden Festival, but I have to admit that I love the food booths more.  So many great items at the 13 booths placed around Epcot’s World Showcase!  During my solo trip I managed to try a food or beverage item from each of the 13 booths (and in some cases, more than one thing from a booth!).  So I thought I would share my thoughts and food photos with all of you!  The festival is wrapping up for this year (it’s runs from March-May), but hopefully this gets you excited about a future trip to Disney during the spring! 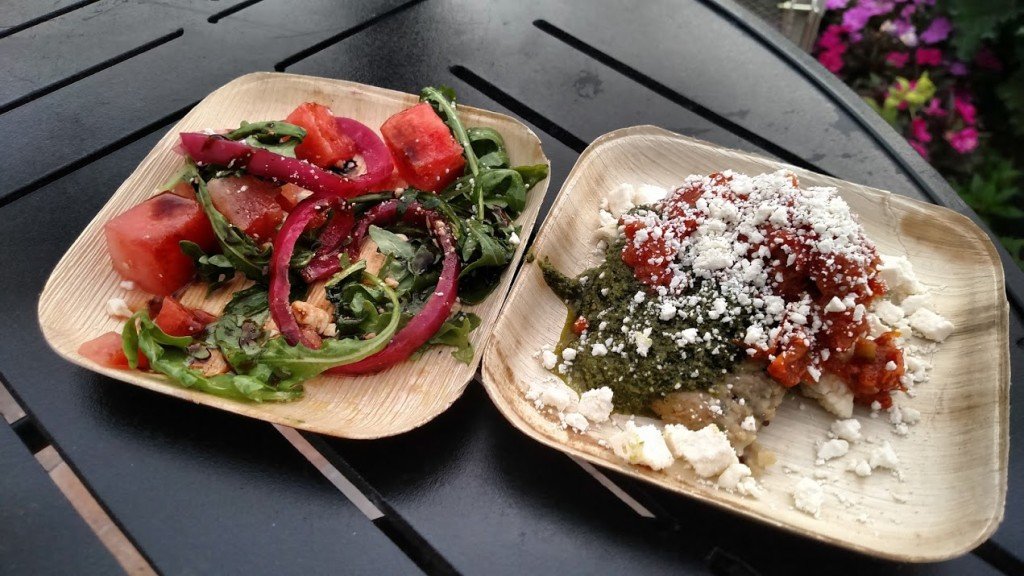 At this booth I ordered the Vegetable and White Bean “Naanwich” with arugula pesto and oven-dried tomatoes and quinoa (on the right).  I really enjoyed this and I think it’s a great vegetarian option.  All of the flavors worked really well together and I especially liked the pesto.  And of course anything on naan bread is great.

I was only planning to order the naanwich here, but at the time I ordered they didn’t have any ready to go so it was a little bit of a wait.  The cast member in the booth felt bad about making me wait and offered me a free watermelon salad!  I’m so glad she did because it ended up being one of my favorites at the festival.  I originally didn’t order it because it had pickled onions and I’m not an onion fan, but they were just two big pieces that were easily removed.  The rest of the salad was arugula topped with watermelon, feta, and a balsamic reduction.  The sweet of the watermelon was complemented really well by the balsamic and it was the perfect light snack on a hot day in a theme park. 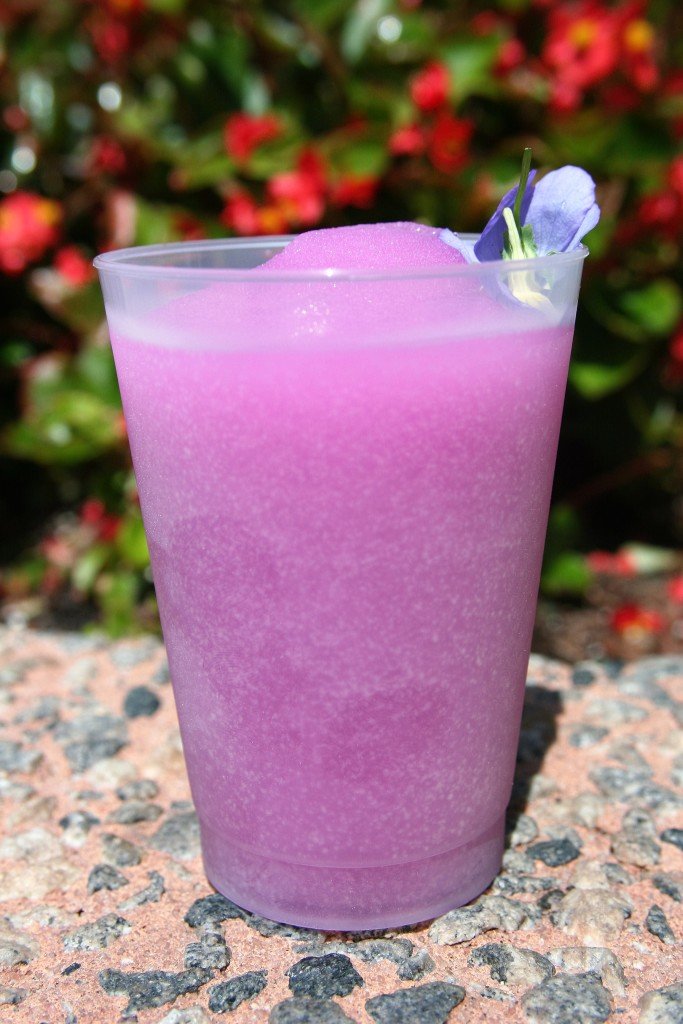 I decided to sample the frozen desert violet lemonade here, although I’m never crazy about drinks that taste like flowers (which is what I assumed this was).  However, I don’t know what the flavor was but it was definitely more sweet and flowery.  I really loved it.  It was sweet but also tart thanks to the lemonade, and being frozen it was super refreshing.

In past years I’ve also had the pineapple soft-serve (which is just dole whip) and the spicy hot dog, and both are very good.  Previously the hot dog was a half size for less money, but this year it was a full size dog topped with pineapple shutney and taro chips for $7. 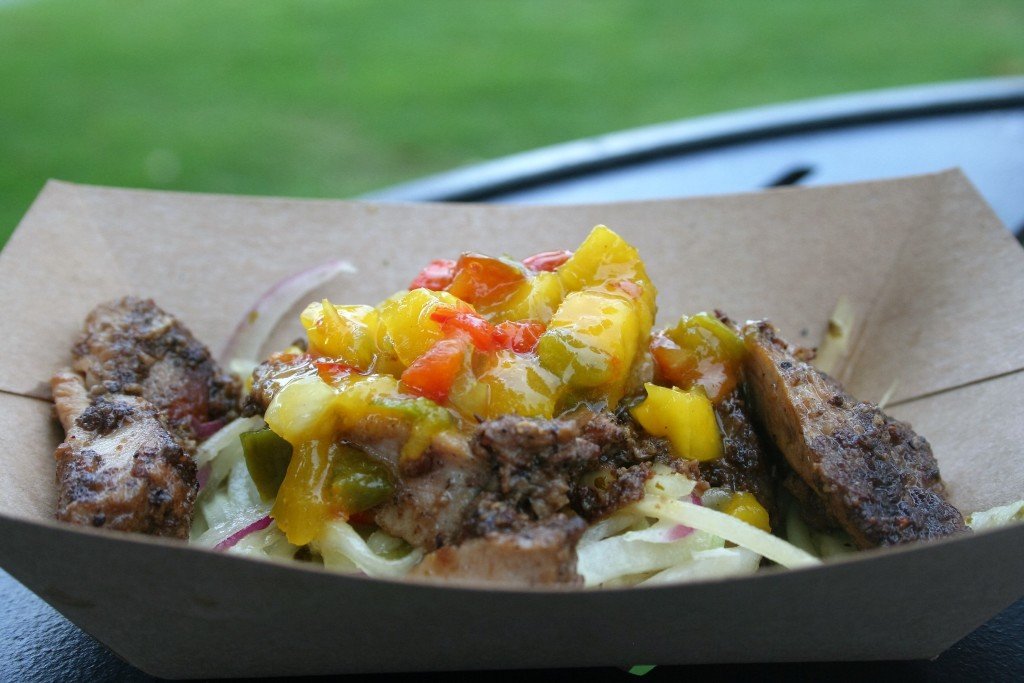 This booth was new this year, and had Caribbean-island inspired dishes.  I tried the jerk-spice chicken with mango salsa, chayote and green papaya slaw with lime-cilantro vinaigrette.  While I wouldn’t rank it as a favorite I definitely enjoyed it, and was pleasantly surprised to find that it had a slight spicy kick to it. 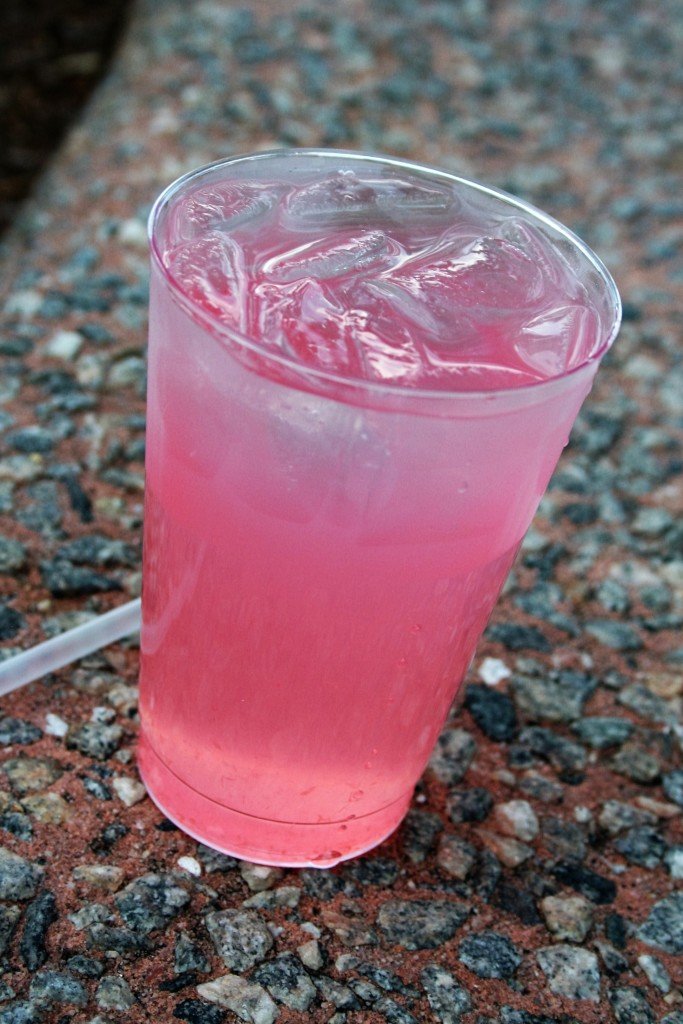 Oh Mexico.  When will I ever learn not to try the margaritas from the Flower and Garden booth?  I did last year and I was super disappointed with it.  This year they had a Rosa margarita which I decided to try.  I’m not going to lie, I thought it was awful.  To begin with I’m normally not a fan of a lot of ice in my drinks, but this one needed more because it was slightly warm when I got it.  The drink was overly sweet in that sickly sort of way.  I drank about 2/3 of it and threw out the rest.  Two things you should know about me – I’m kind of cheap and I love margaritas.  So for me to throw out part of a $9 margarita means it must have been pretty bad. 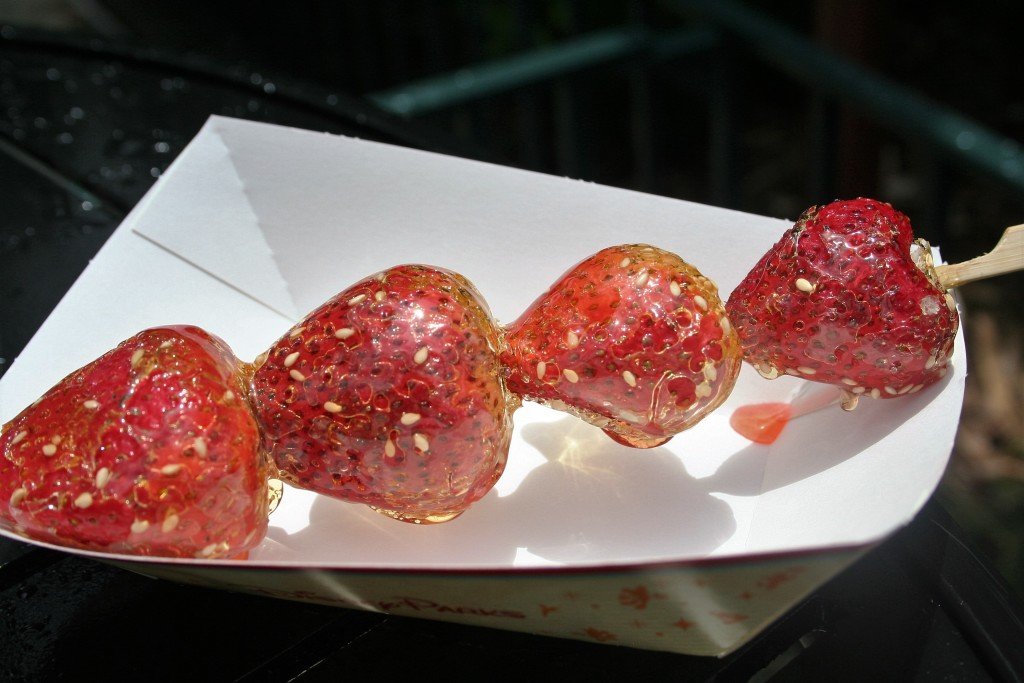 In China I visited an old favorite from last year.  The Beijing-style candied strawberries.  These are big, juicy strawberries full of flavor that have been coated in hardened sugar and dipped in sesame seeds, so you have a bit of that sesame flavor too.  I love everything about them, but they’re definitely a particular taste so if you don’t like sesame I’d pass on them.  Otherwise try it! 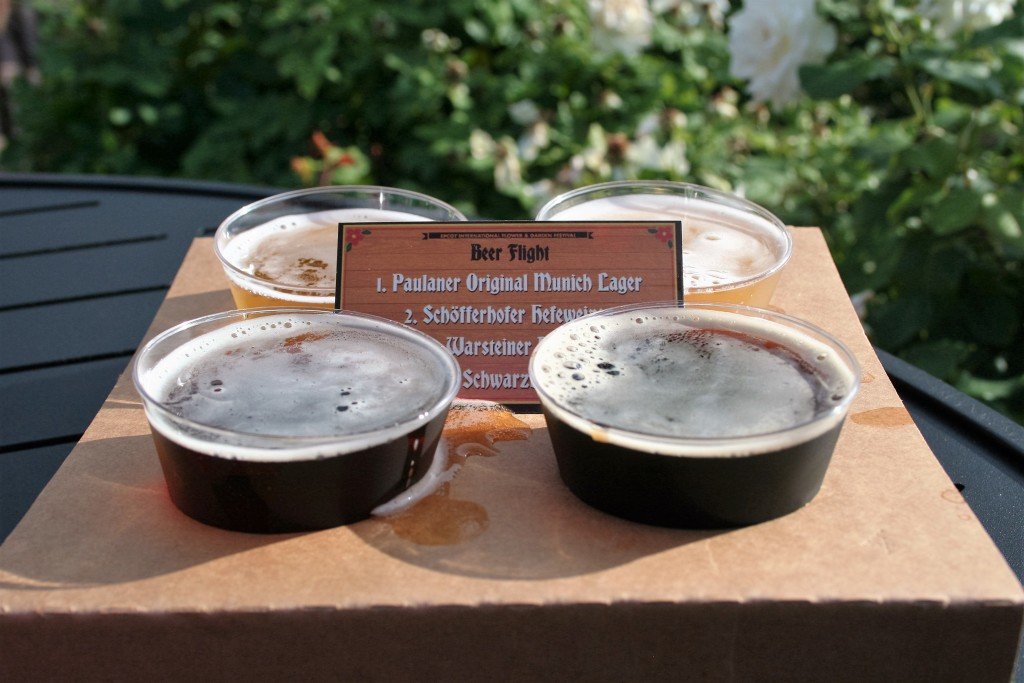 While in Germany have a beer, right?  I tried several as I took advantage of the beer flight that they offered.  This included the Paulaner original Munich Lager, Shofferhofer Hefeweizen, Warsteiner Dunkel, and Kostritzer Scharzbier Black Lager.  The first one, the Munich Lager, was fine.  It was a bit bland.  The Hefeweizen was probably my favorite.  I wasn’t sure what I would think about the other two as I’m not a big fan of dark beers.  The Dunkel I wasn’t crazy about but I actually really liked the black lager, go figure.  Definitely worth it to try them all. 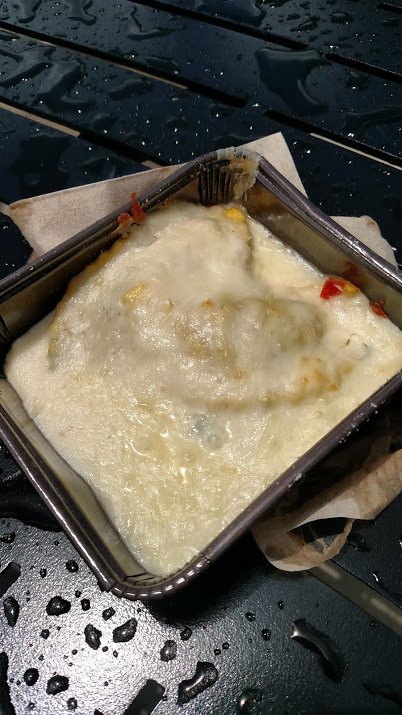 Pasta is my favorite food in the world, so of course in Italy I had to try the pasta dish.  This was the Mezze Lune Primavera – egg pasta stuffed with ricotta and spinach in a creamy sauce with spring vegetables and pecorino cheese.  It was all right, but nothing to write home about.  It just felt like a very generic pasta dish to me.  I think it was about $6 and at least for that the portion size was pretty decent.  This was one that I wished I had someone to share with me because it filled me up pretty well.

The Smokehouse: Barbecue and Brews 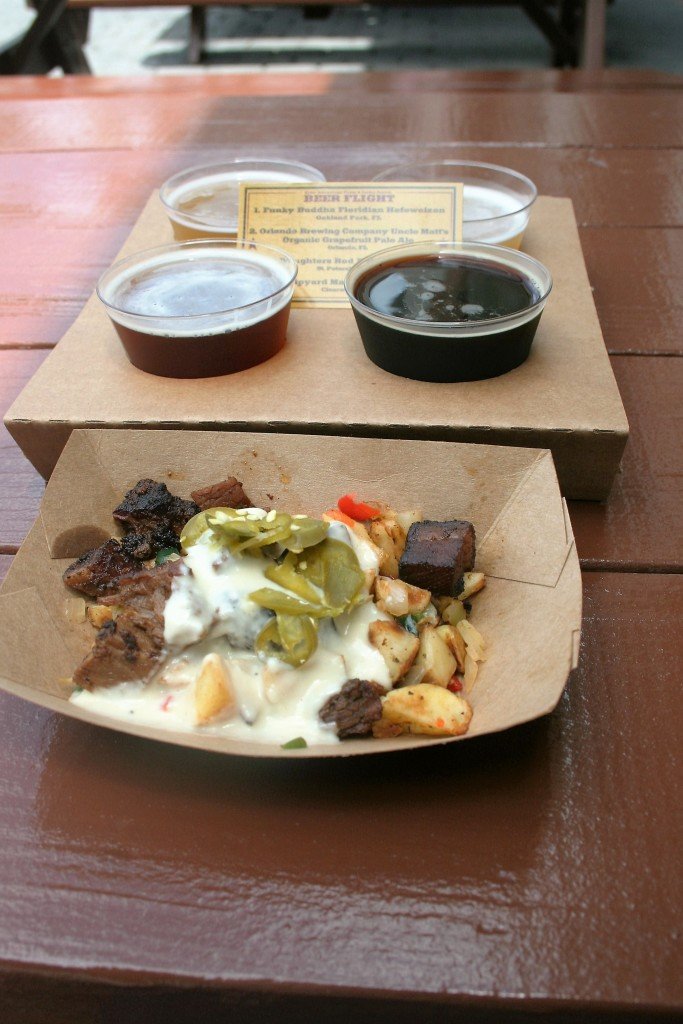 God Bless America!  For food I tried the beef brisket burnt ends hash with white cheddar fondue and pickled jalapenos.  People absolutely rave about this dish and I understand why.  I will say I’m just not really a fan of beef brisket, I’m not crazy about the flavor or the texture of it.  I loved the potato part with the cheese and jalapenos though.

I also got another beer flight here (it was on a different day than the Germany flight).  I tried the Funky Buddha Floridian Hefeweizen, which was decent, Traveling grapefruit ale which I really enjoyed, 3 Daughters Rod Bender Red Ale (not a fan), and the Shipyard Maple Bacon stout (which has a really interesting flavor even though I’m not big on stouts). 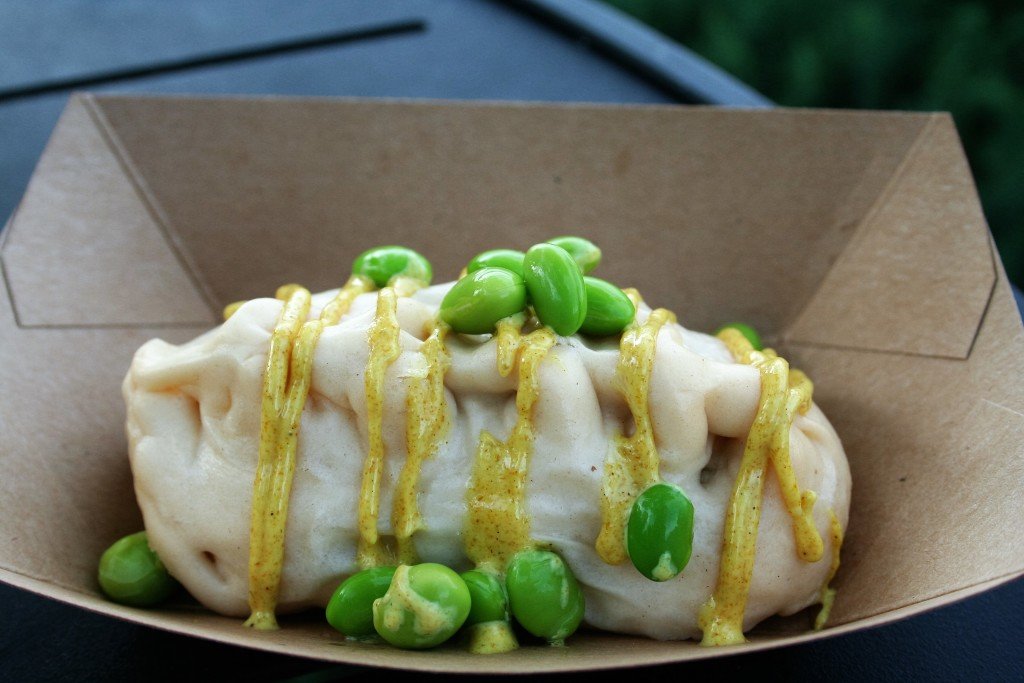 I was very tempted to go with the frushi, which I’ve loved in the past here, but I decided to try something new.  I had the chicken edamame bun (steamed bun filled with chicken and edamame and topped with curry sauce).  The curry sauce was hands down the best part of this.  It had great flavor and a little spice.  The bun by itself was pretty bland, so I actually wished I’d had even more curry sauce on this. 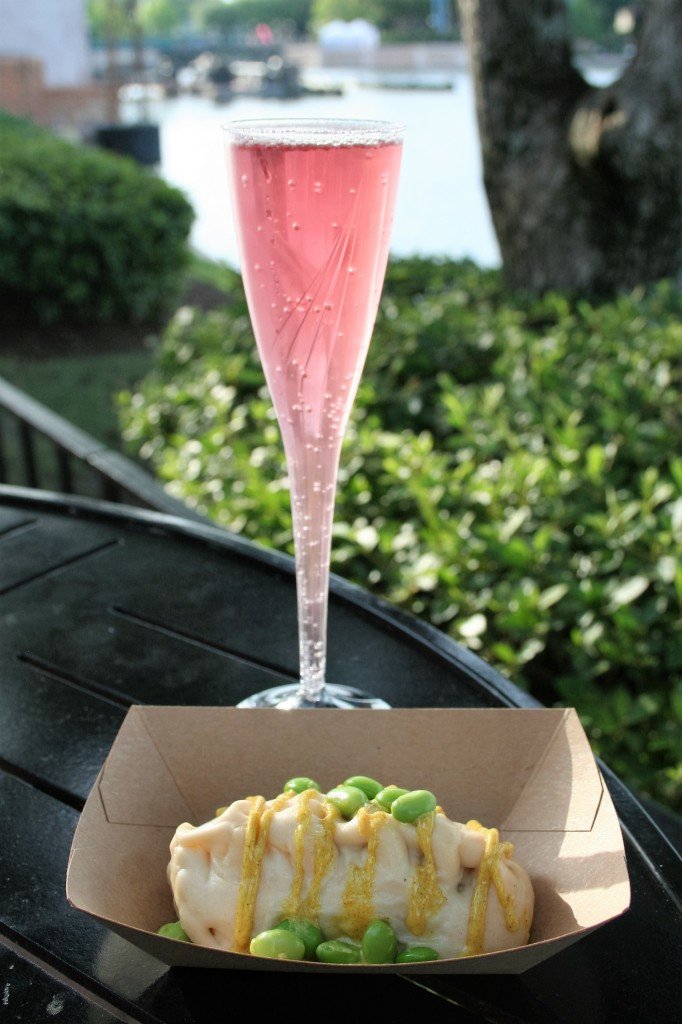 I decided to go with a drink here in Morocco, so I had the Desert Rose (sparkling wine topped with pomegranate liqueur).  This was pretty standard but was a decent enough drink.  They put only a splash of the pomegranate in so I didn’t really taste it – it was mostly just a white sparkling wine. 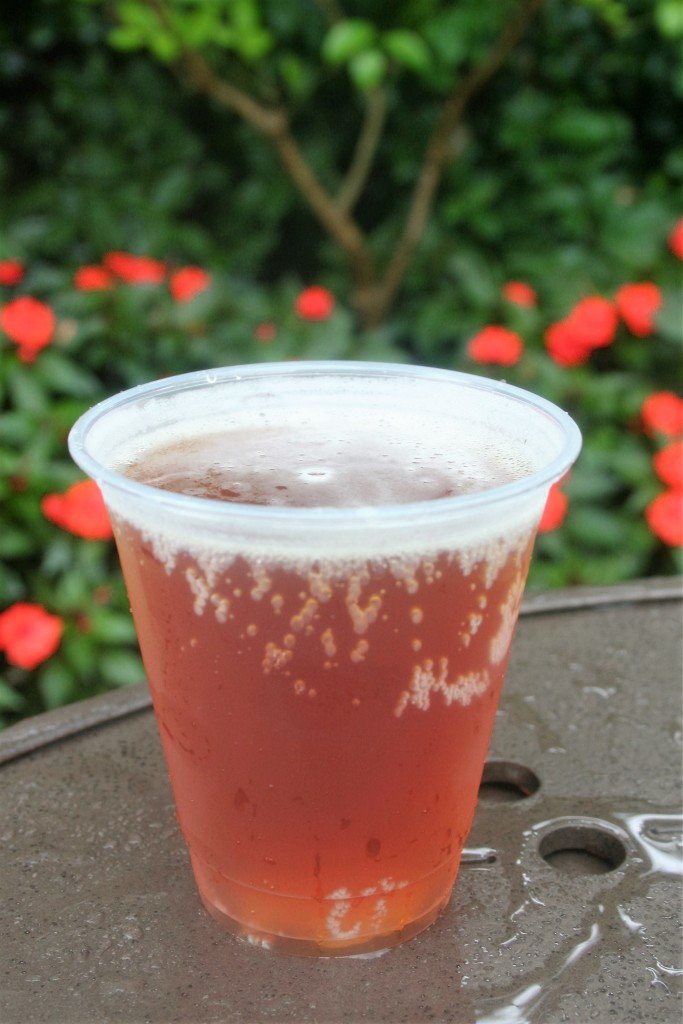 I first tried the Feast of Flowers Farmhouse Ale made by the Florida Beer Company.  I couldn’t pass this up as it’s an ale made especially for the festival, so you can’t get it anywhere else.  I’m glad I tried it because it was a really pleasant ale.  It also started pouring rain after I got it so I ran under cover in France and was able to enjoy my drink while I attempted to wait out the rain. 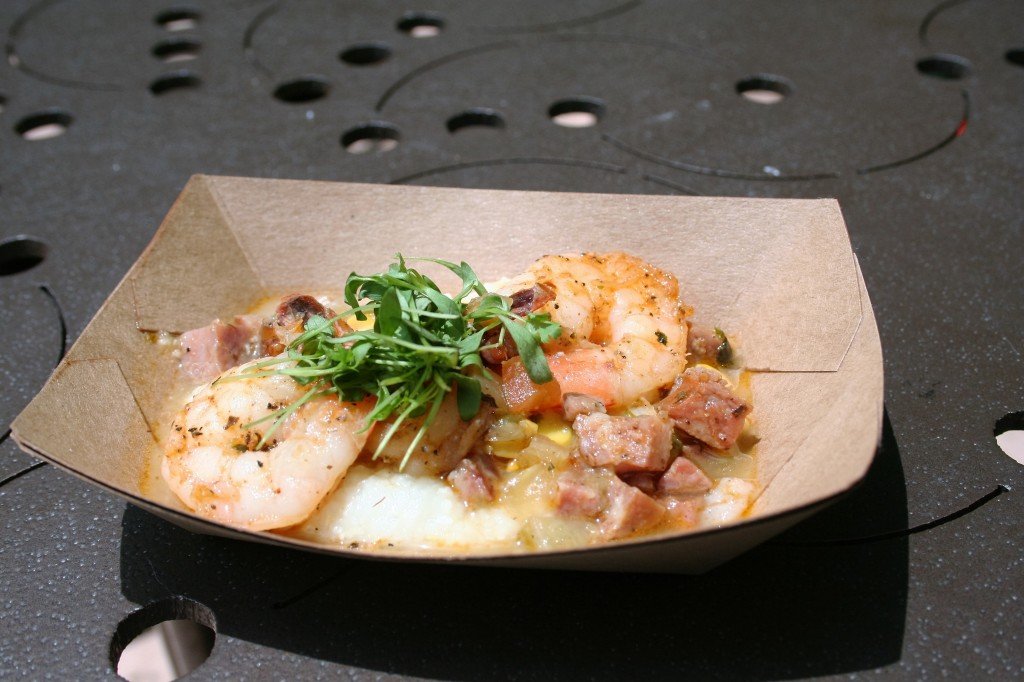 I also had the shrimp and stone-ground grits with andouille sausage, sweet corn, tomatoes and cilantro.  I love shrimp but am not the biggest fan of grits, but I thought this dish was great.  The shrimp were large and tasty and the flavors all blended together really well. 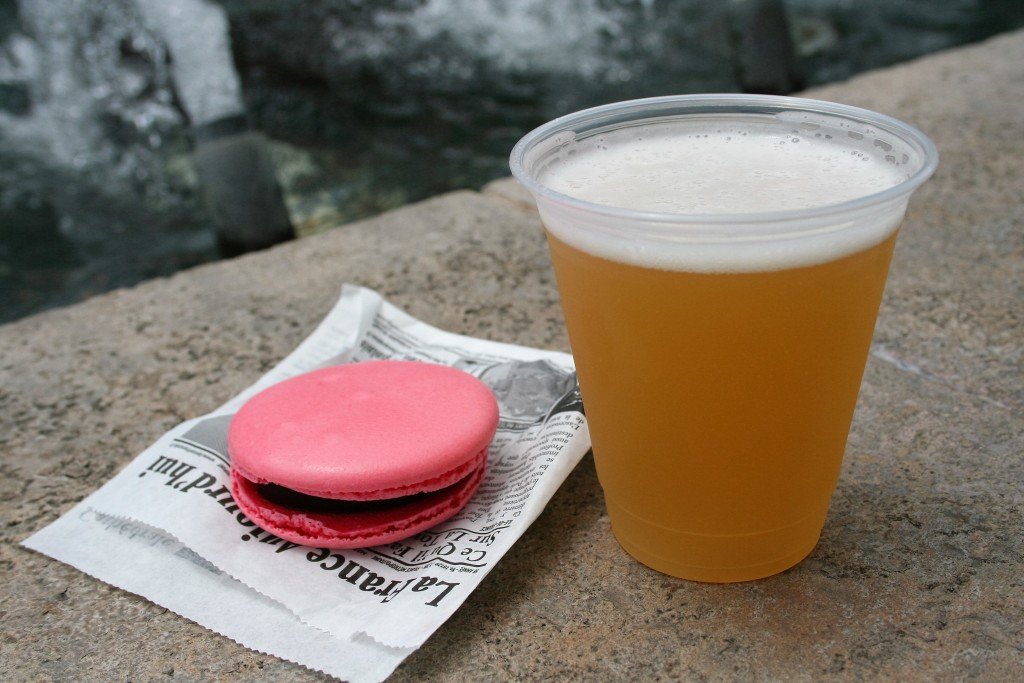 I love maracons, so I had the raspberry and chocolate one that they offered here.  I have to say it wasn’t my favorite.  There was a ton of fudge in the center that really seemed overpowering to the raspberry flavor.  I also had the Kronenbourg Blanc 1664 beer, which was described as a fruity beer.  Maybe my taste buds were off that day but it didn’t taste very fruity to me, just rather plain. 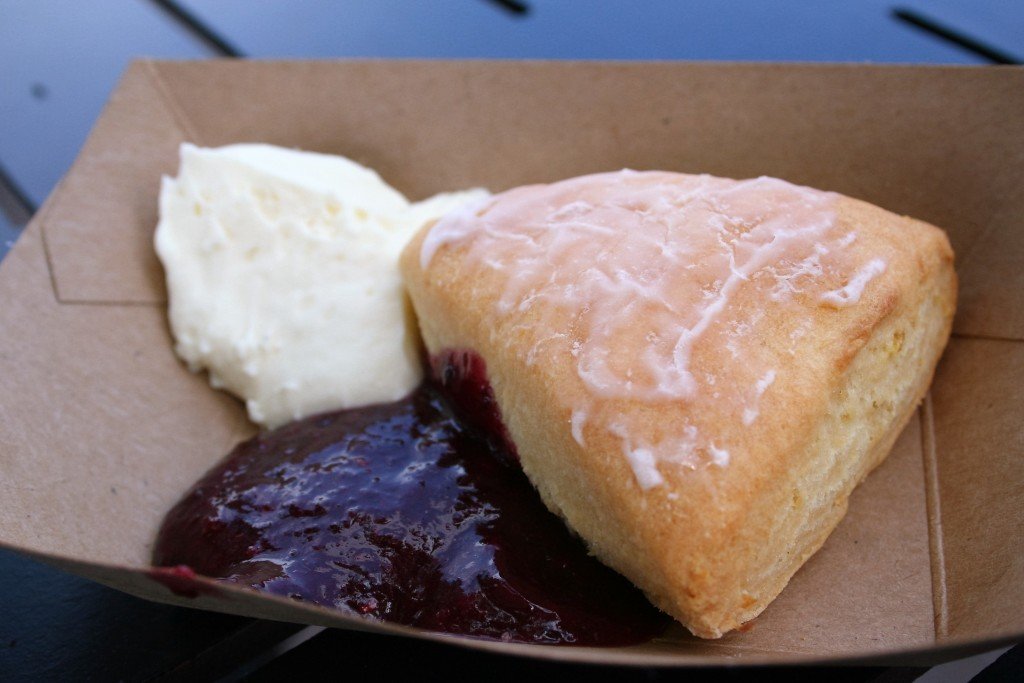 Lots of tasty sounding items were at this booth in the UK, but as I was hitting it up at opening around 11 I decided to start with “breakfast” and have the lemon scone with crème fraiche and mixed berries.  Lots of good stuff going on here I thought, and the crème fraiche and berries were an awesome accompaniment. 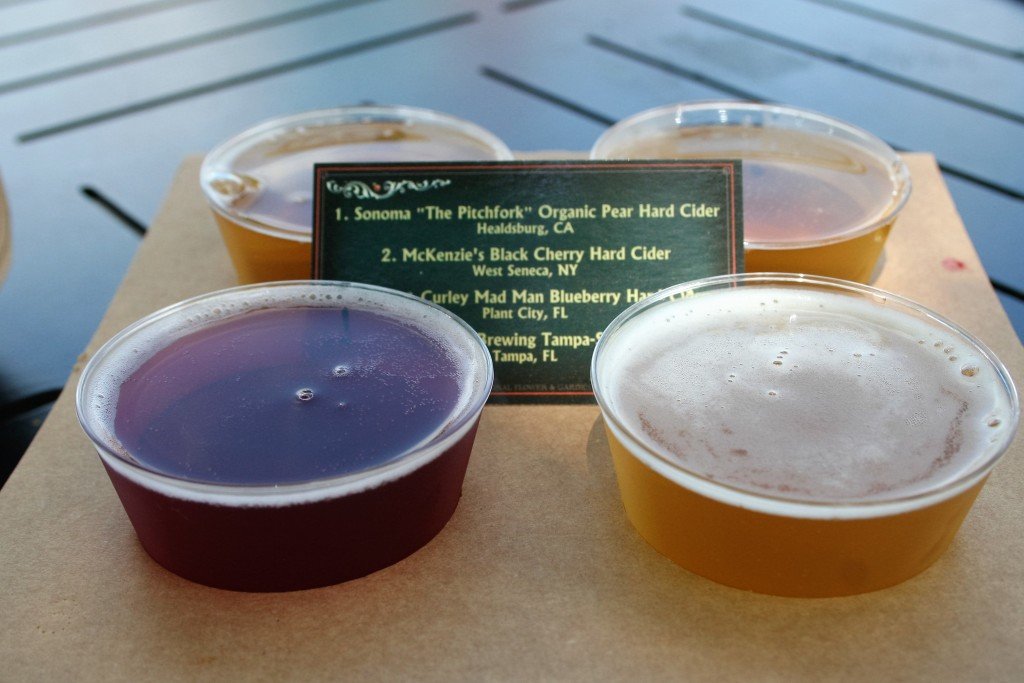 And of course since it was 11 in the morning I also ordered the cider and beer flight.  There was only 1 beer and 3 ciders included.  The beer was the Cigar City Brewing Tampa-style lager, and I was not impressed personally.  I loved the ciders though – they inclueed the Sonoma “The Pitchfork” Organic Pear Hard Cider, McKenzie’s Black Cherry Hard Cider, and the Keel and Curley Mad Man Blueberry Hard Cider.  I kept going back and forth on which one was my favorite, but I think it was the pear.  Or maybe the blueberry!  They were all good if you’re a fan of ciders.

Overall I loved the food and drink offerings this year at Flower and Garden.  My top 5 picks for the year (and ones I hope to see back in future years!):

Which of these food and drinks options sounds the best to you?