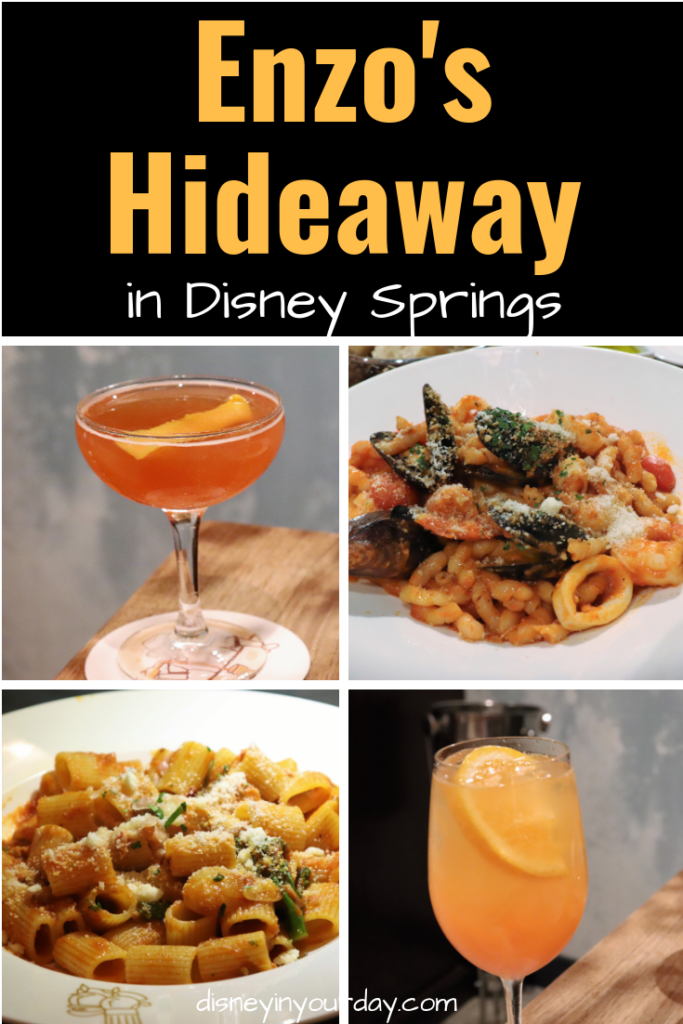 At the beginning of this year a series of new restaurants opened in Disney Springs that’s been referred to as the “Edison complex.” 4 restaurants are part of this area and they are all owned by the same company (the Patina Group), and most of them have an Italian based menu, but each of them has its own interesting theme and story line. They include The Edison, Enzo’s Hideaway, Maria and Enzo’s, and Pizza Ponte. I’m eager to try them all, but the first one I got to experience was Enzo’s Hideaway. 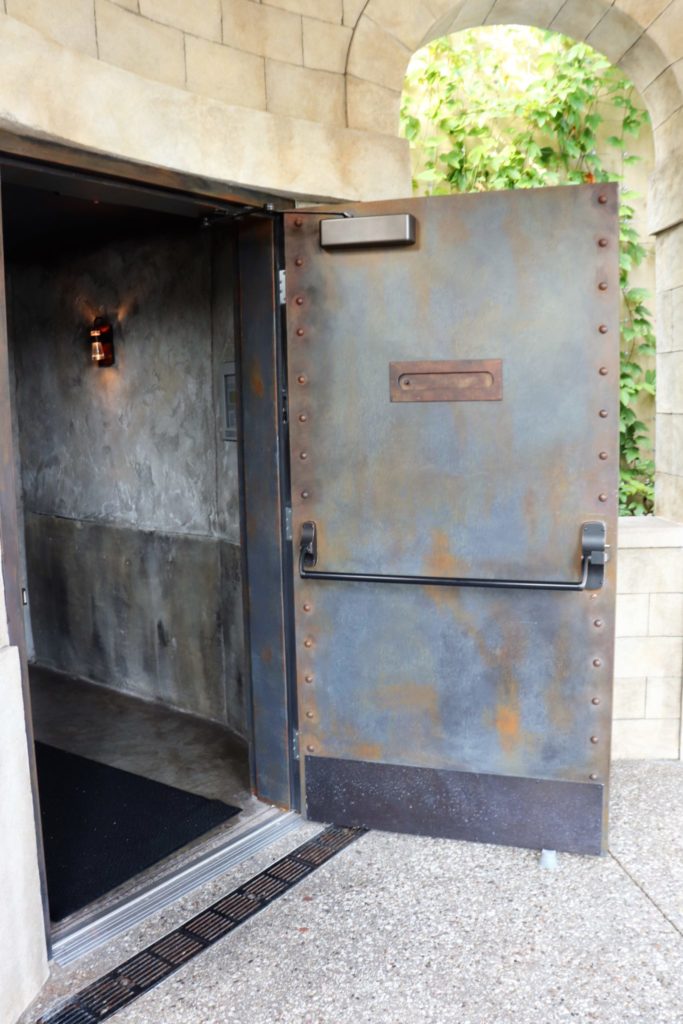 And I’ll tell you right now that I think it’s going to be difficult for the other 3 to live up to what a great meal this was! The theme or story of the restaurant is really cool. It’s supposed to be a speakeasy and is referred to as a “tunnel bar.” Sure enough, it feels like you’re entering a tunnel when you get there, including the door that is clearly only a restaurant for people in the know! The space itself has a cool vibe with old looking brick walls, graffiti all over the place, and a huge and stunning marble table in the middle of the room. 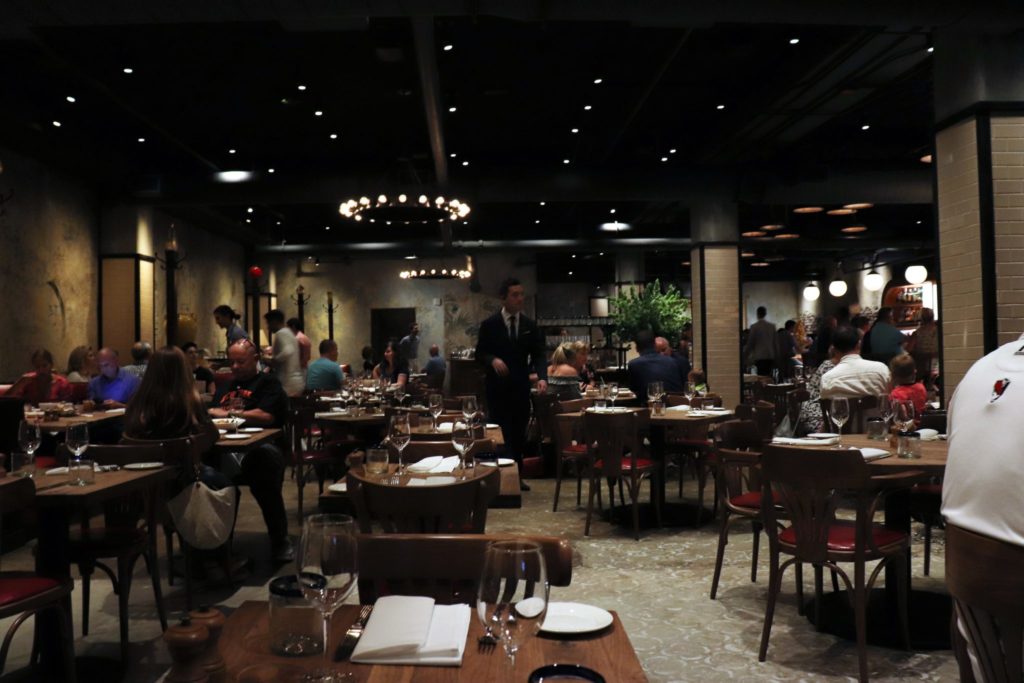 Being a speakeasy, of course there is a large and really interesting drink menu.  They have a collection of cocktails listed under “Giggle Water,” and while a majority are either gin, rum, or whiskey based, there’s a variety of options so there should be something for everyone. They are fairly pricey at $14 each, but my friend and I each picked one to try. There were so many choices it was hard to decide! 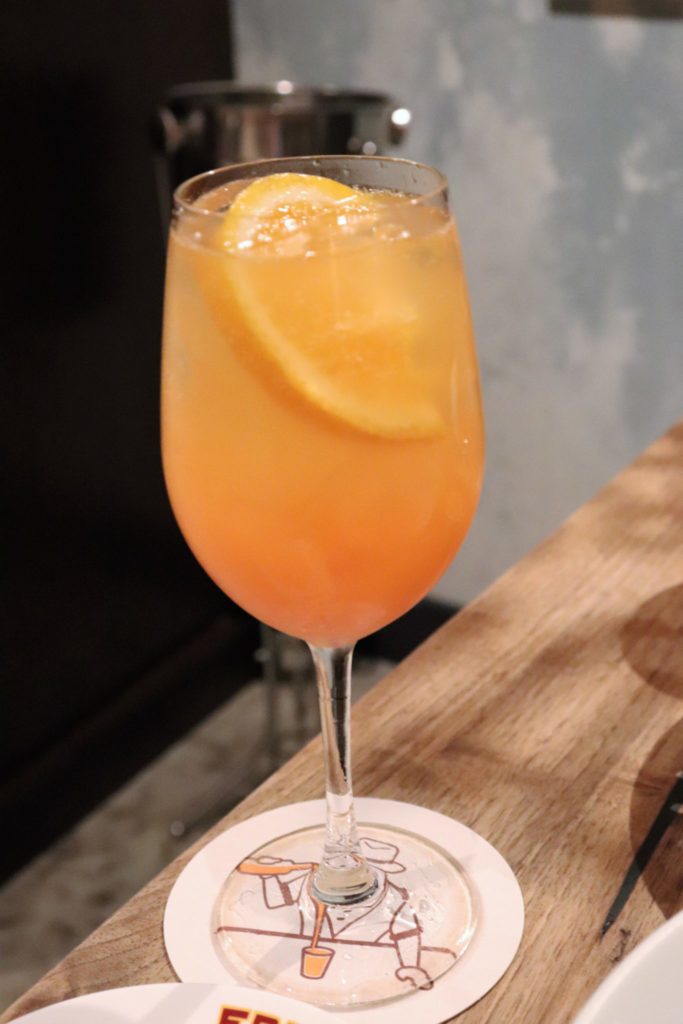 This was light and refreshing. I will say it didn’t feel like a cocktail that was worth $14 (I think it would need to be stronger for me to feel like I was really getting my money’s worth there) but I definitely enjoyed it. I’d never had aperol before, and I still don’t get a great feel for it since it was mixed into the cocktail but everything worked together really well. 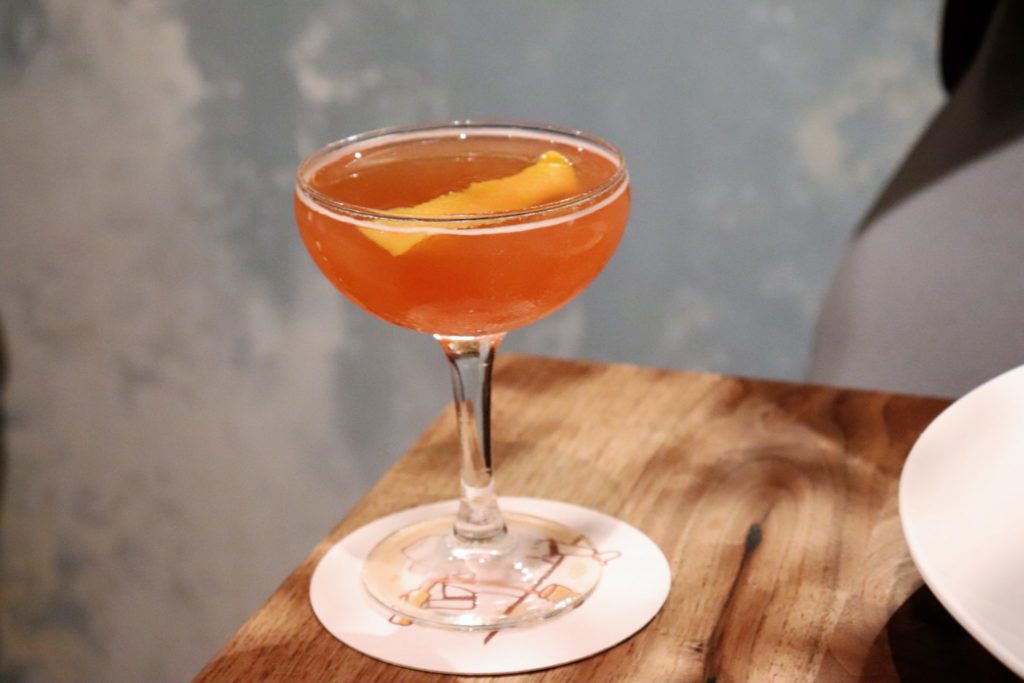 At least, I’m pretty sure that’s what this is. All the other photos I’ve found of this drink online have a flower in it, and this did not, but that being said nothing else seems to match this photo on the menu and I was fairly certain that’s what she ordered! It was another tasty drink and a bit stronger than mine with the scotch.

On to the food! I have to say that the menu looked amazing. Usually there is one thing on a menu that stands out to me the most based on my tastes, but this menu had 4 or 5 dishes I would easily order and I couldn’t decide!  Lots of pasta options, and I’m a huge pasta fan, plus there was a special that sounded quite good as well.

In the end I went with the server’s recommendation. I got the Seafood Vesuvio (spiral shaped pasta, mussels, shrimp, calamari, toasted garlic, tomato, white wine, lemon): 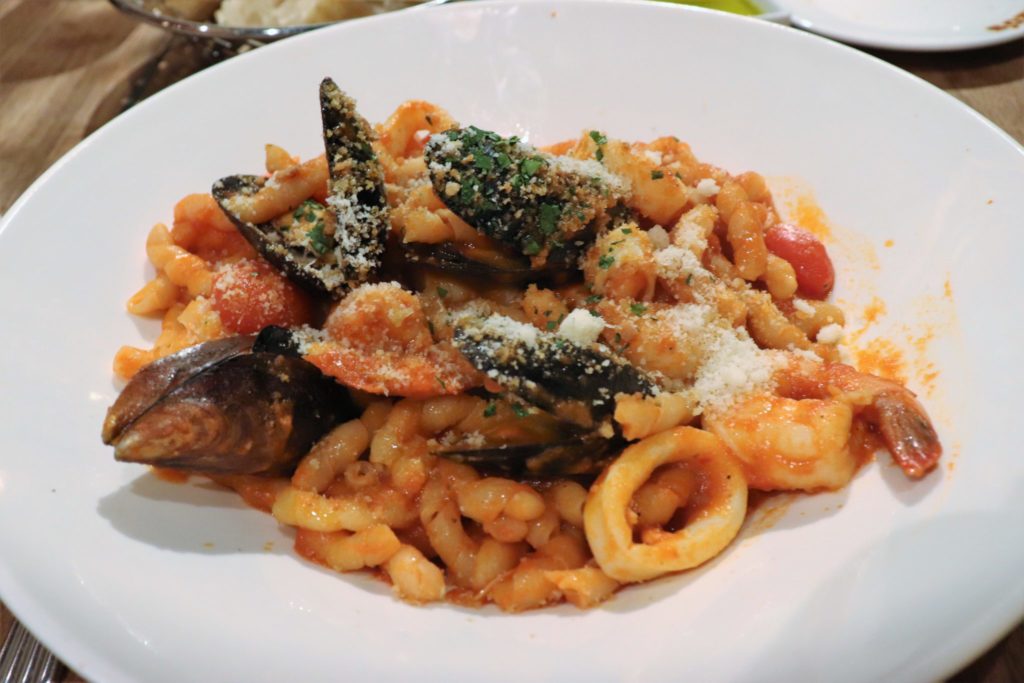 This was definitely a good choice!  I pretty much cleared my plate.  The seafood was all good – the shrimp were large and well cooked, not underdone but also not chewy and overcooked. And I really liked the pasta sauce. I was surprised that the lemon was such a prominent part of the flavor. It was very light and citrusy. 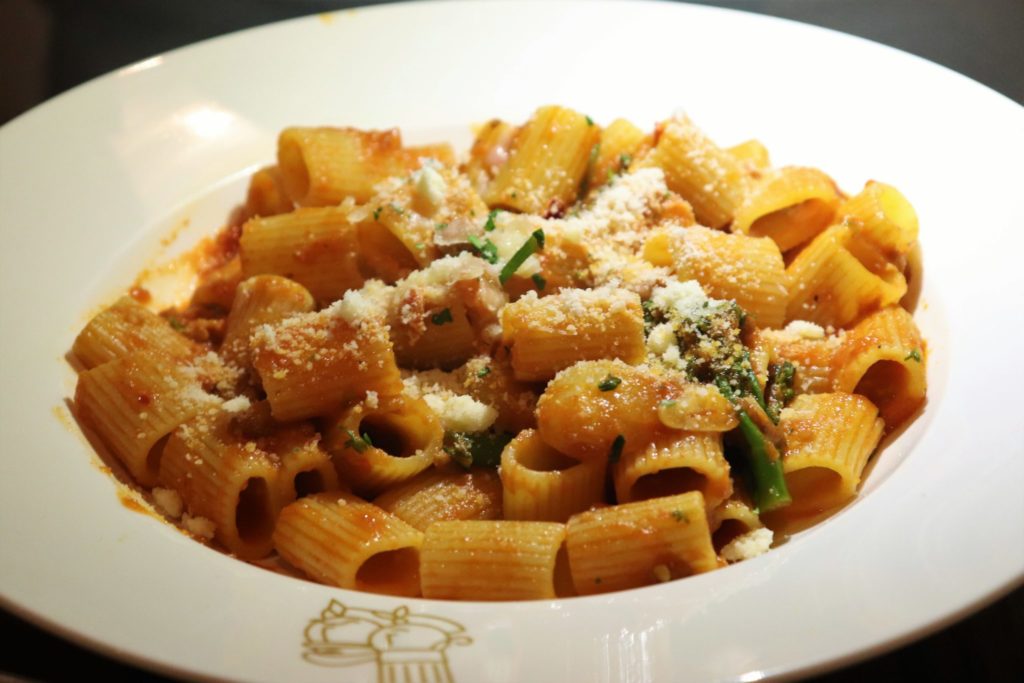 She’s not as adventurous eater but it was nice that there were still options on the menu that were interesting and tasty without being totally unusual! This looks delicious too.

Service was also insanely quick. Almost too quick? They brought out our meals so soon after we ordered them – it was maybe 5-10 minutes at the most. But it didn’t taste like it had been sitting out or anything, so I’m not sure how they do that.

We decided to pass on dessert here because they were all quite pricey and nothing was really calling to us. There are lots of other options to get something sweet in Disney Springs so we decided to try our luck elsewhere. 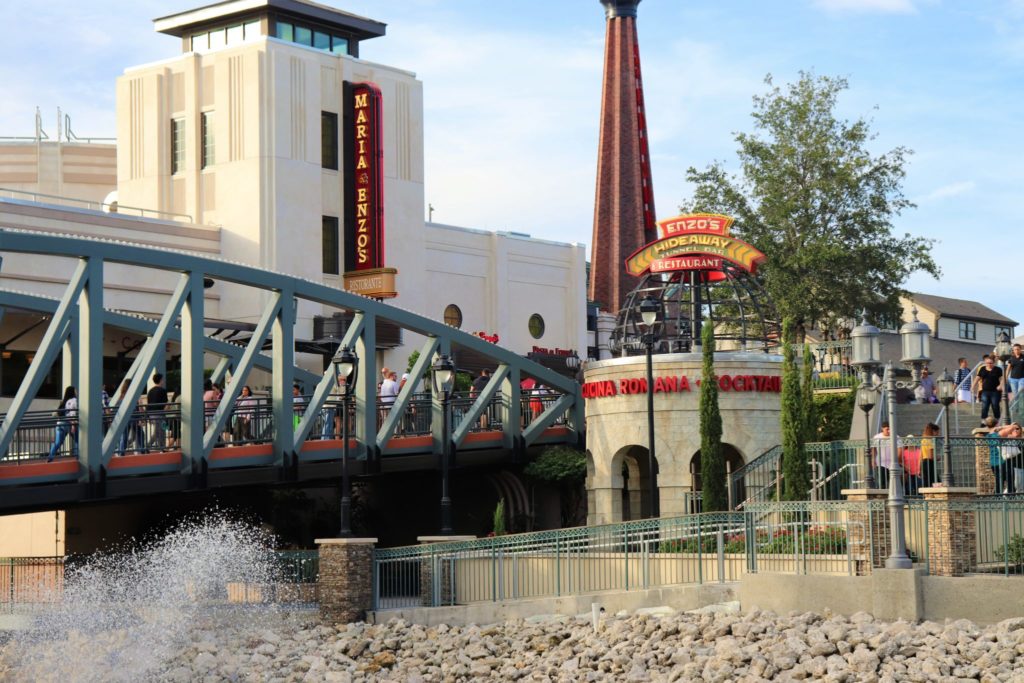 I was really pleased with Enzo’s Hideaway and would love to be back at some point. On our next trip in November we’ll be trying the Edison, and I can’t wait to see how it compares! I know the atmosphere is totally different (I walked through the Edison already) but I’m eager to try out the drinks and the food, of course.

Have you tried Enzo’s Hideaway? What sounds best to you?