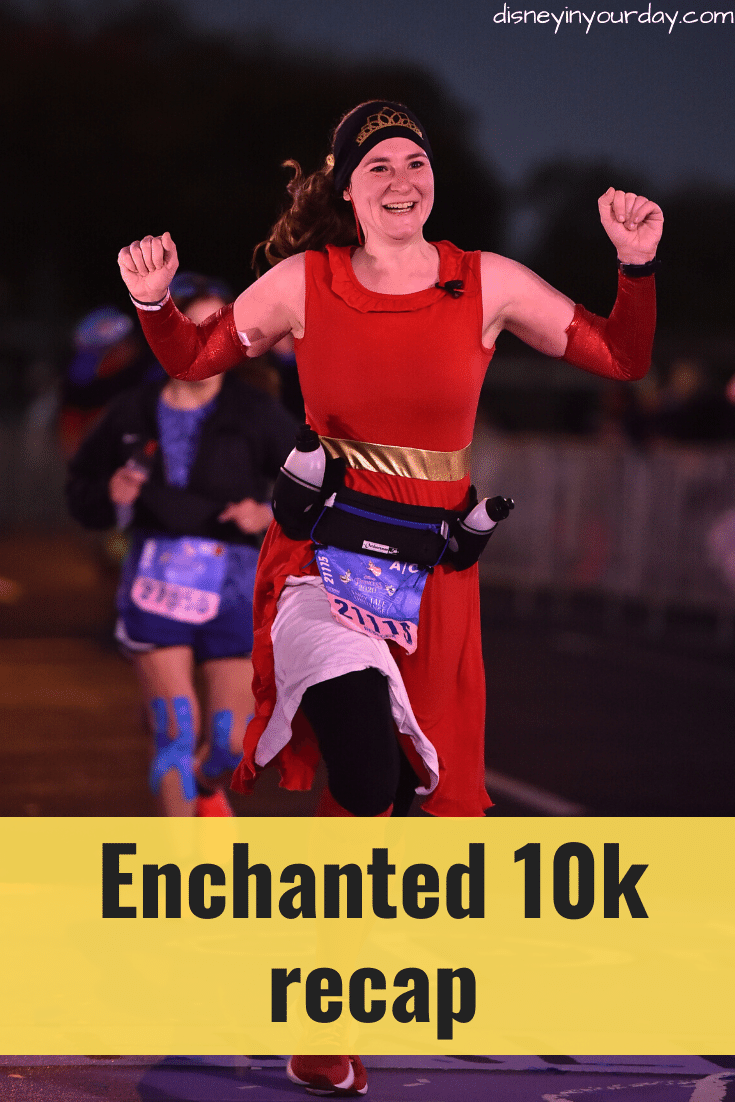 Another February has gone by, which means another Disney race weekend! I just can’t quit Princess race weekend so I found myself there again running the Fairy Tale Challenge – that the 10k on Saturday and the half marathon on Sunday.

Like all good Disney races, it was up bright and early for the Enchanted 10k. Well, not bright, because the sun definitely isn’t out yet. I think I was on the bus around 3:45am to head over to Epcot. It was cold this morning for Florida – it was about 47 degrees at the start and there was some wind happening as well. Totally different from last month when it was about 75 degrees. So I headed to corral A and sat around there shivering until the start. 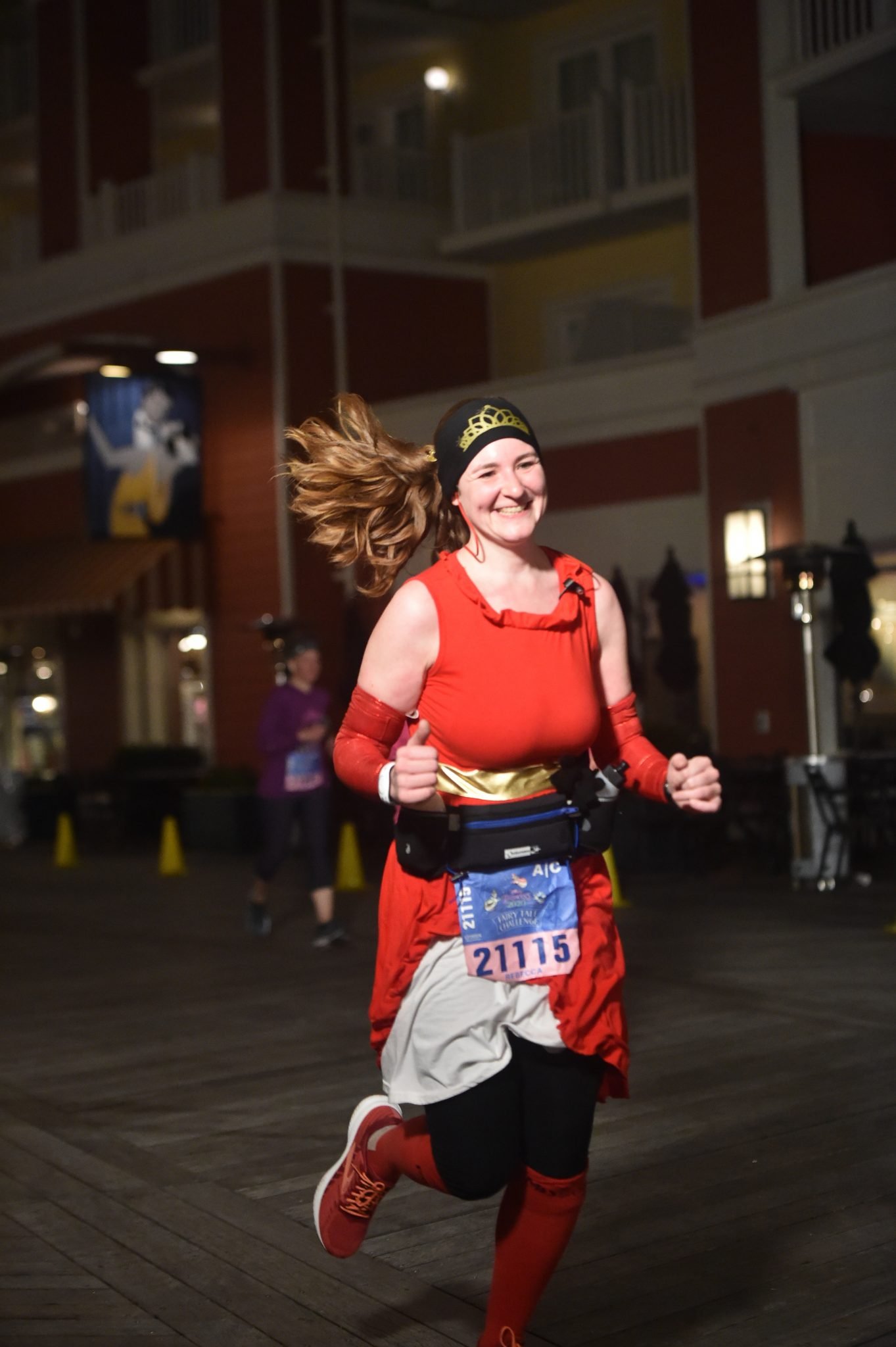 I started at 5:35am and started out strong and fast, mostly because I just wanted to get moving and sweating so I could warm up. I didn’t want to push too hard with the half marathon the next day, but I knew that I could probably do pretty well since I’ve done a lot of back to back training runs.

I’m always iffy on if I’ll stop for character photos. It’s totally play it by ear – if there’s a character I love, who matches my costume, or who’s very rare and the line doesn’t look outrageous, I’ll stop. It all depends on who’s out. During the January 10k I wasn’t tempted to stop by any of them, so I kind of expected the same here. 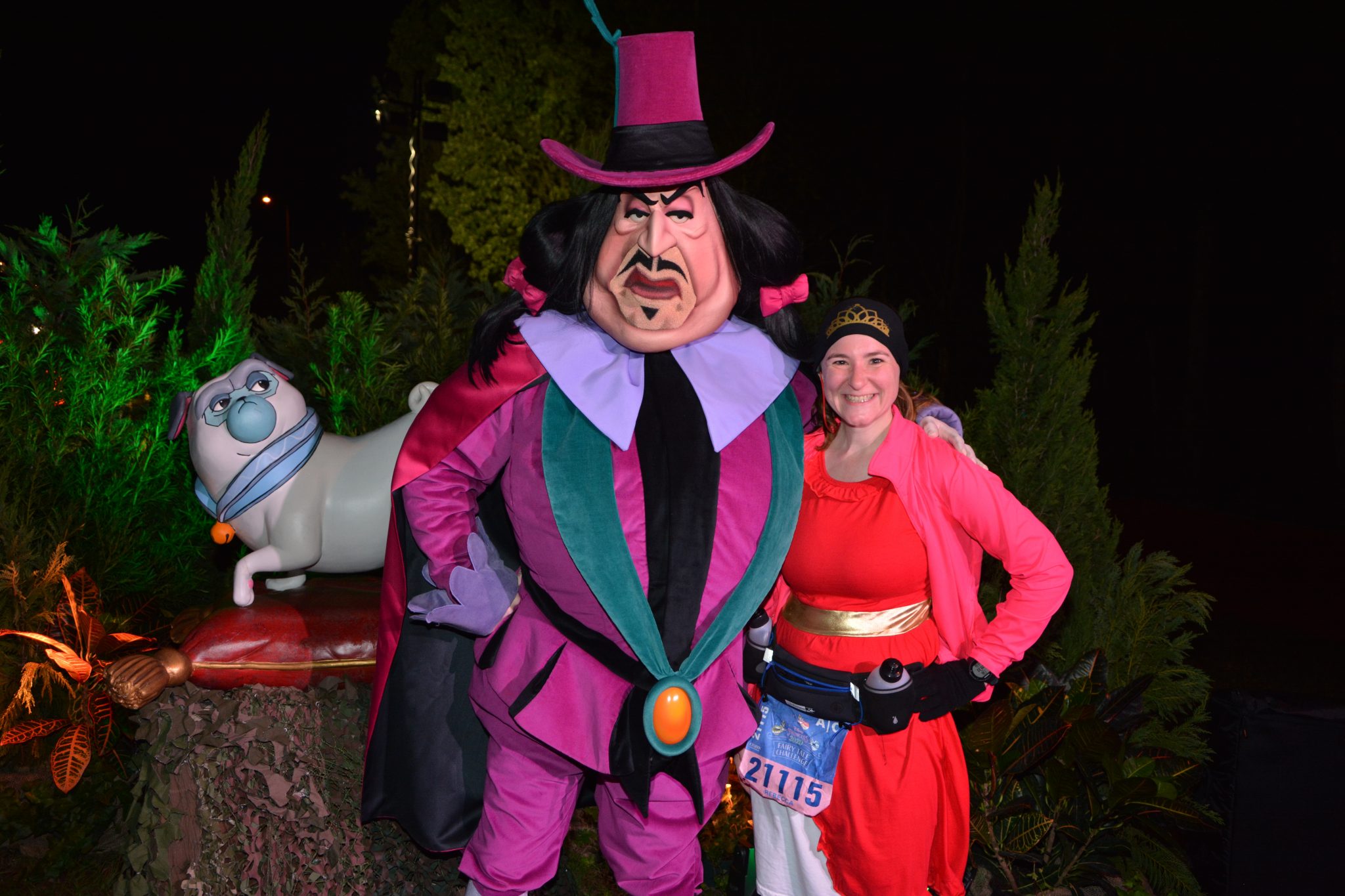 I was wrong – this time I stopped 5 times! My first stop was for Governor Ratcliffe, the villain from Pocahontas. There were a lot of Pocahontas characters out this year since her movie was the theme for the 10k. This stop was right around mile 2. I kept going, took off my throwaway jacket at some point around mile 2. The course was the same as in January but different from other years, in that you ran right back towards where the start was and through the parking lot. 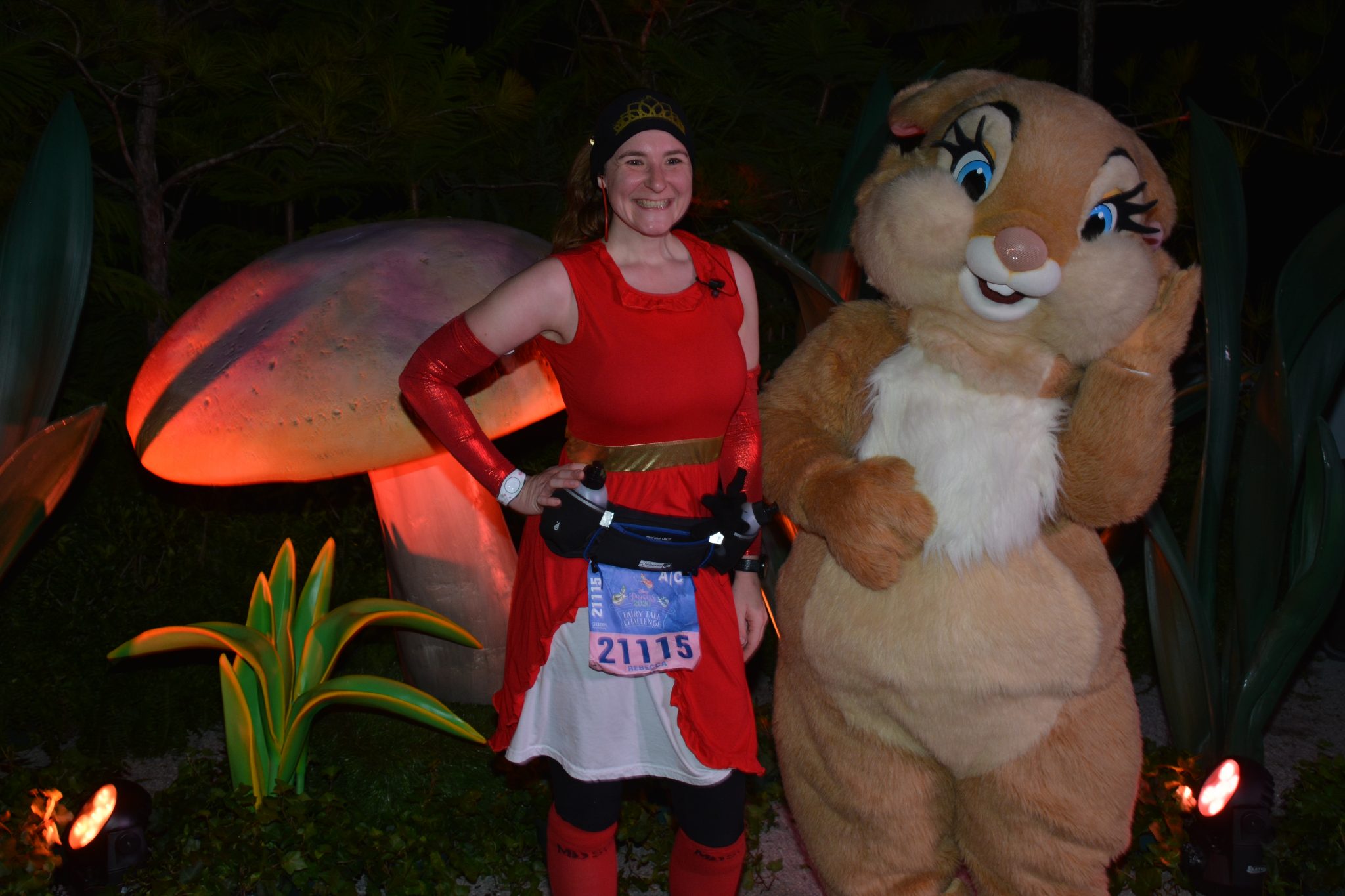 I hit the 5k mark at 31:56, and this is pretty close to where you enter the Epcot area. Right after the 5k mark was Miss Bunny from Bambi! Her wait wasn’t too bad so I grabbed a picture and entered the park.

Running through the World Showcase is really pretty, and they have Disney music playing over the speakers so it’s one of my favorite moments of the race. There were a lot of characters here too, but I had to stop in France when I saw Esmeralda and Quasimodo! Though I think he’s seen better days, lol. 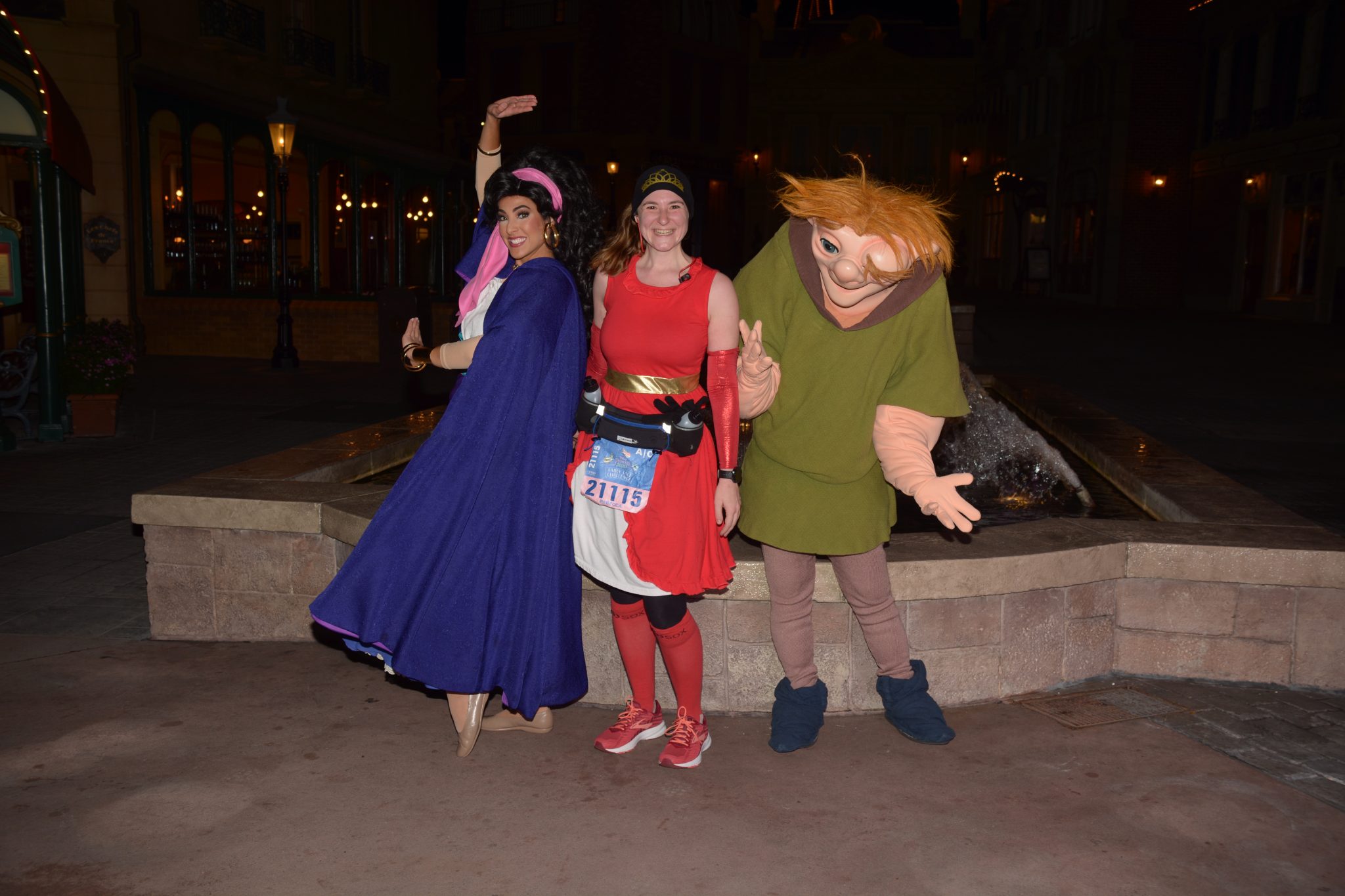 From there you head over to the Boardwalk and do a loop around there. As we were running to the Beach Club who do I see but Clarice, the “sexy chipmunk”! I had thought about stopping for a photo with her for the January 10k but her line was really long. This time there were only 2 people waiting so it was a no brainer. 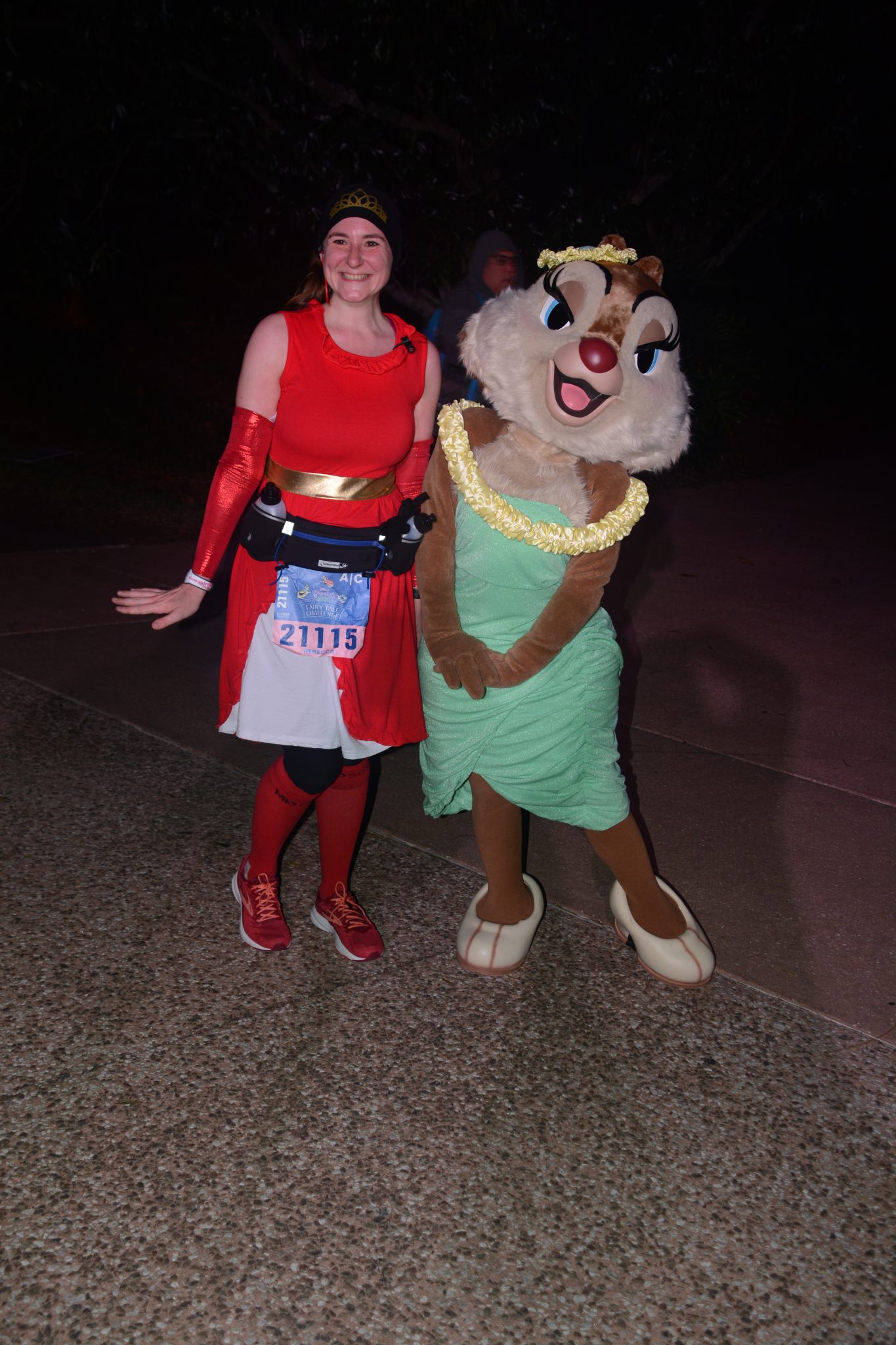 We made our way back into Epcot, through world showcase entering by the UK and running through Canada. You used to run by Spaceship Earth at this point but that’s no longer possible due to all of the massive amounts of construction and walls set up. Instead you continue through World Showcase past Mexico and exit right where the Donald meet and greet usually is, before you get to Norway. Before Mexico was Merryweather, so I grabbed another photo – there were so many rare characters out! 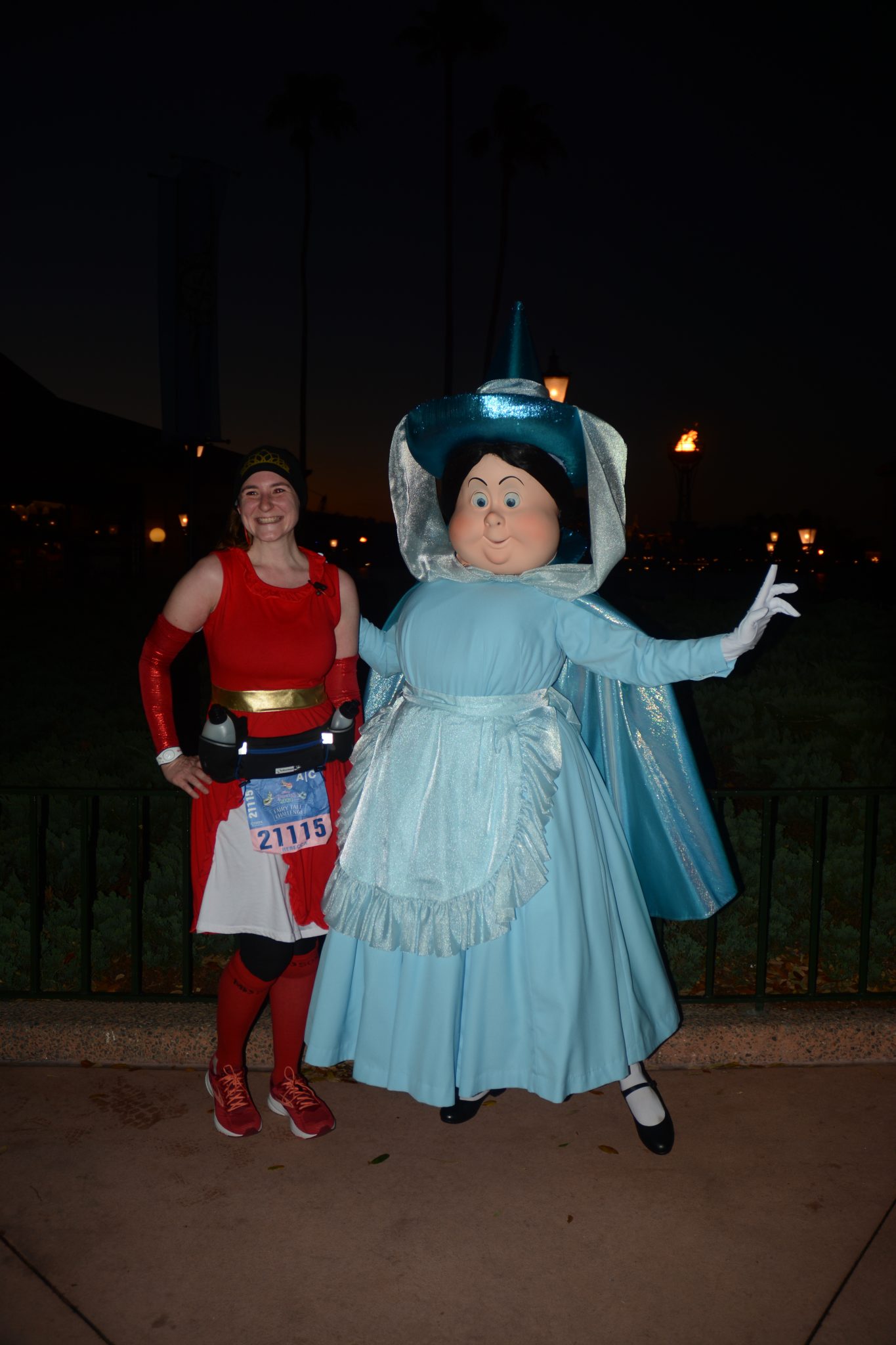 From there I got my medal, my snacks, and headed to the bus area. I was able to get on a bus and sit (which was good because it was still cold), but we couldn’t actually leave for another 40 minutes or so because people were still running/walking on the course. To be honest it was a little depressing to see people getting swept or already looking defeated at around mile 2.5. But once the course was clear it was back to Animal Kingdom Lodge for me! 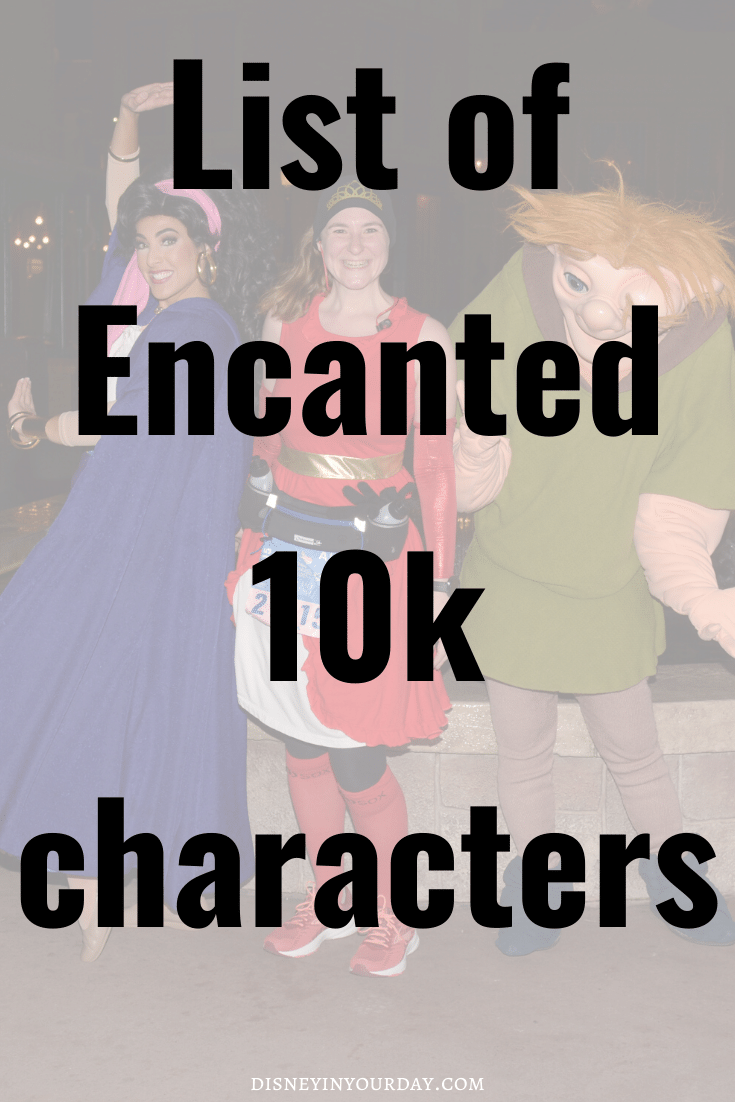 Characters at the Enchanted 10k:

Have you done a RunDisney event? Which character would you most want to meet?