Day 4 was our first day actually getting off of the ship in Alaska! Our first scheduled stop was in Skagway, and we had a lot of time there – we arrived around 7am and didn’t have to be back on board until 8pm. We had signed up for one excursion that day with a meeting time of 8:30am so we had breakfast delivered to the room, went down to meet with our group and then headed out in Skagway! 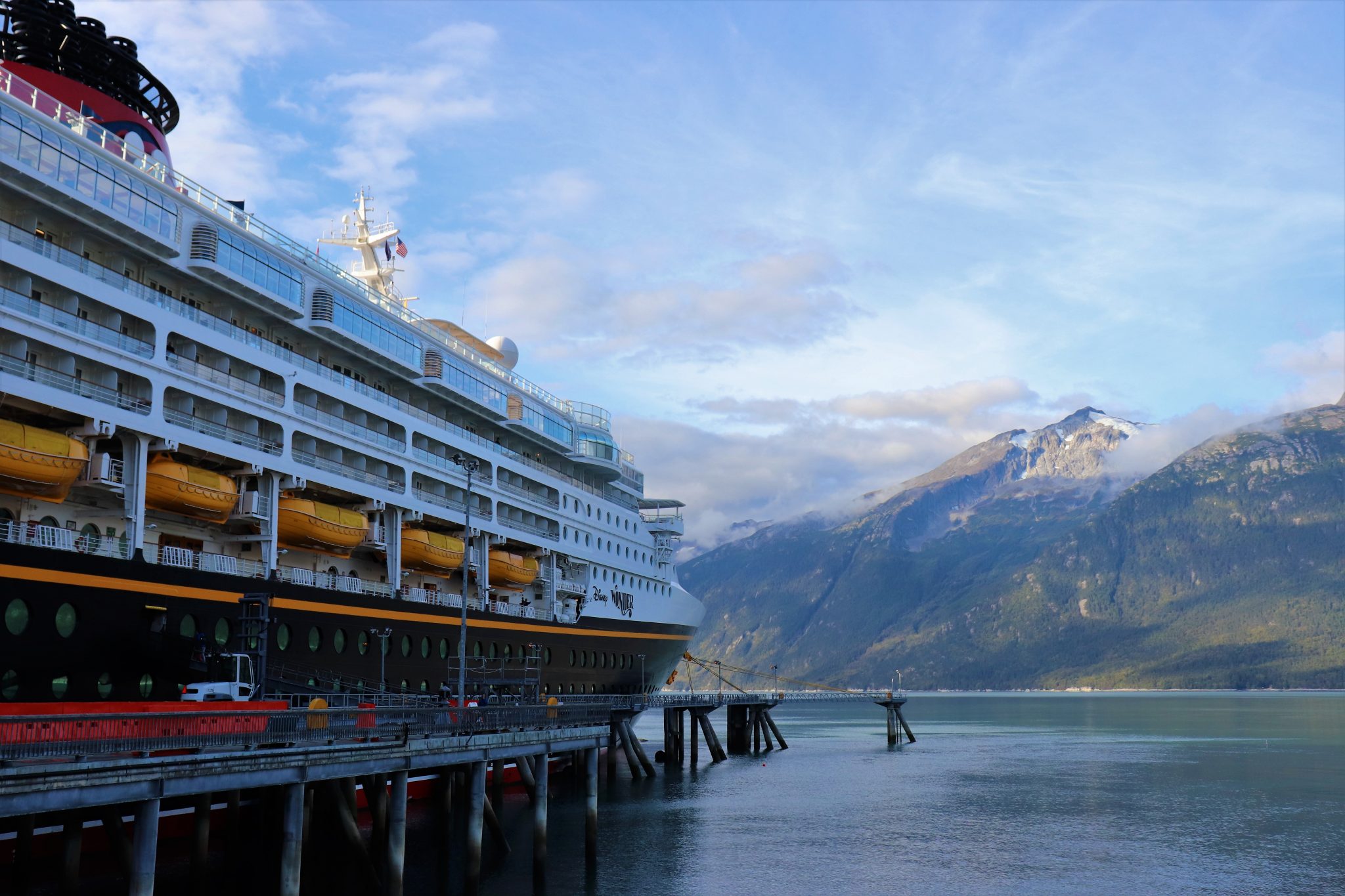 We were signed up for a rock climbing expedition so we met up with one of our guides who took us in a shuttle out to the area where we would be climbing. Jason is big into rock climbing but I am not so much. I was a little nervous – I’ve been to the rock climbing gym with him a handful of times but had never attempted climbing outside! Our two guides were awesome and super helpful. They had a bunch of different challenge levels to climb. I managed to go up two of them and it wasn’t as scary as I thought! 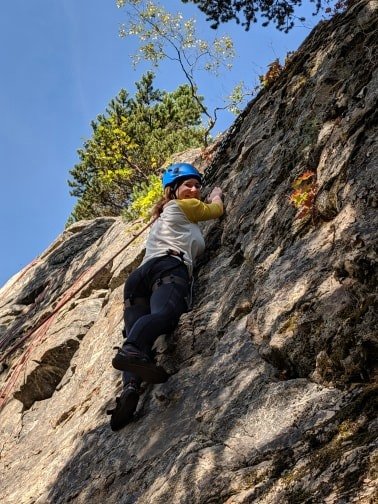 Jason of course did the more challenging ones. He saw one that had this big ledge sticking out and decided that was the one he wanted to do. And he did it, all the way to the top! We had 7 people in our group and 2 people could climb at a time since you needed one of the guides to anchor you. It was also really fun watching other people climb. 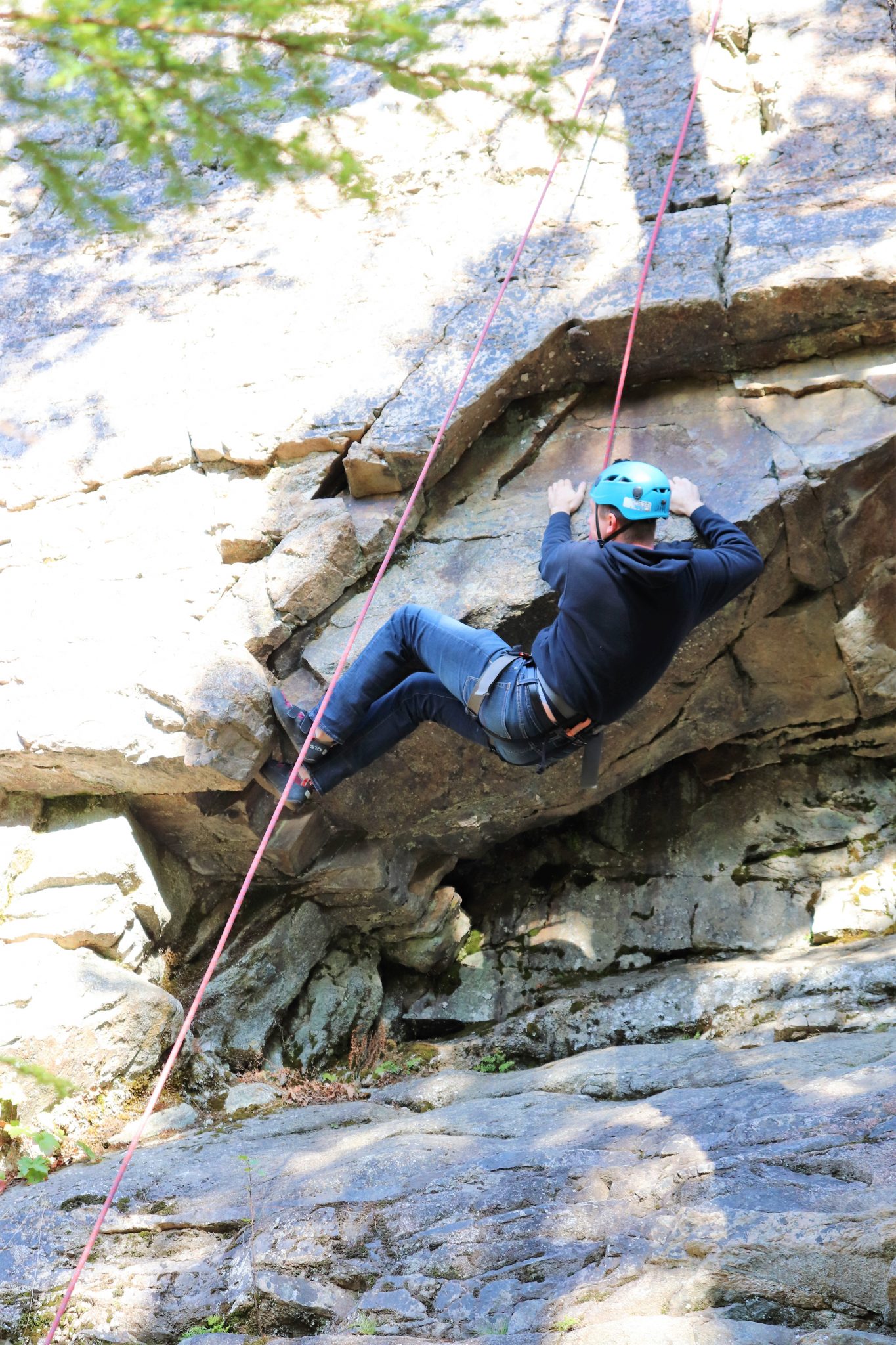 After climbing they took us to the top of the cliff so we could experience rappelling back down. Nope, that was not for me! Basically you have to just step off the edge of the cliff backwards… I don’t love heights and being up there looking down it was not happening. Everyone else did it and I cheered them on and then walked back down to the bottom, haha. 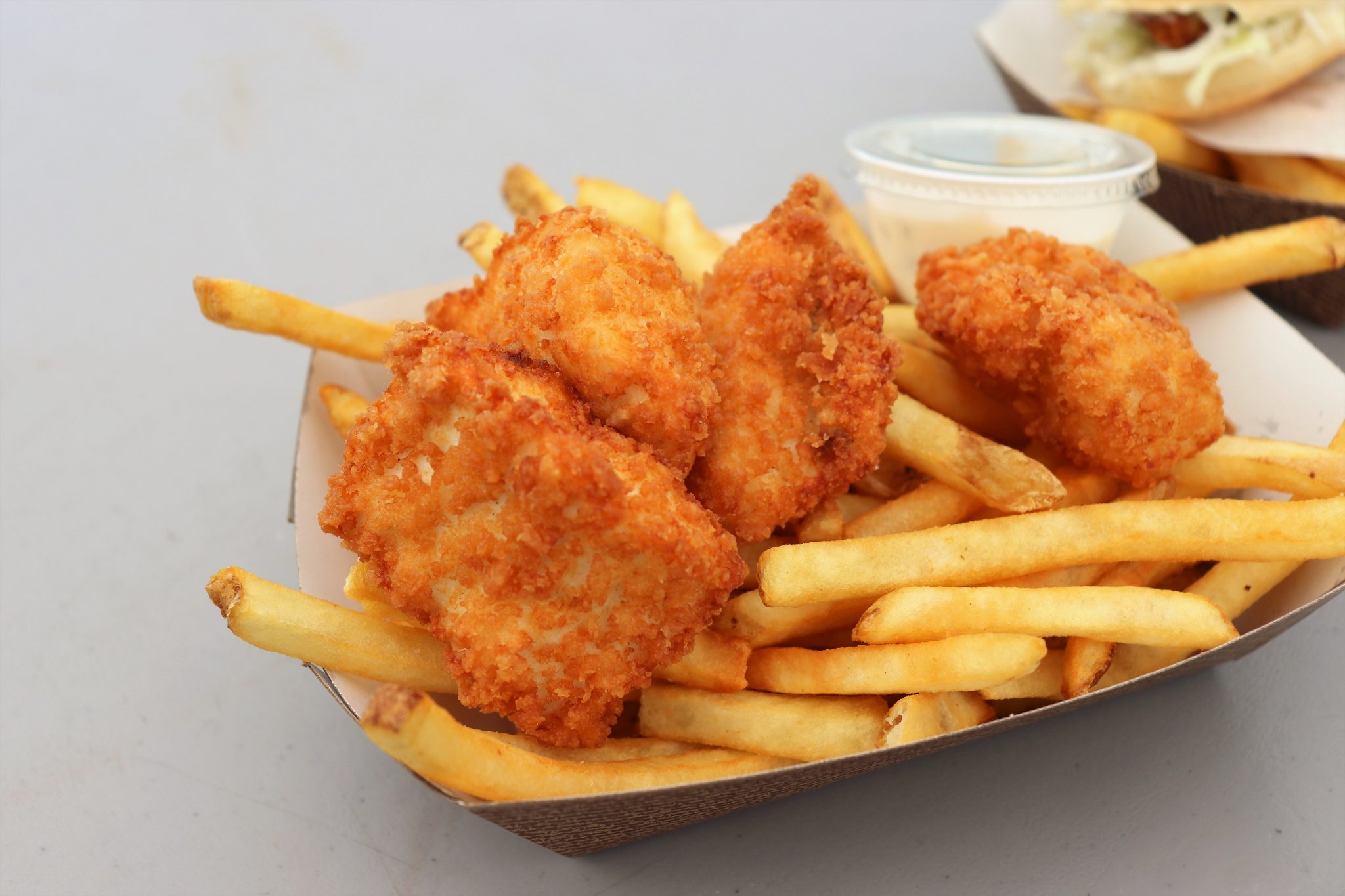 After our rock climbing adventures we were brought back into town and decided to get lunch. We’d heard about a good brewery called the Klondike Brewing Co. with nice views, but they didn’t have food. So we grabbed something to go from Woadie’s Seafood and brought it to the brewery with us! I got the fish and chips and it was amazing. Pricey, but it’s Alaska so you know the fish is going to be good. Jason got a salmon sandwich that was also excellent. 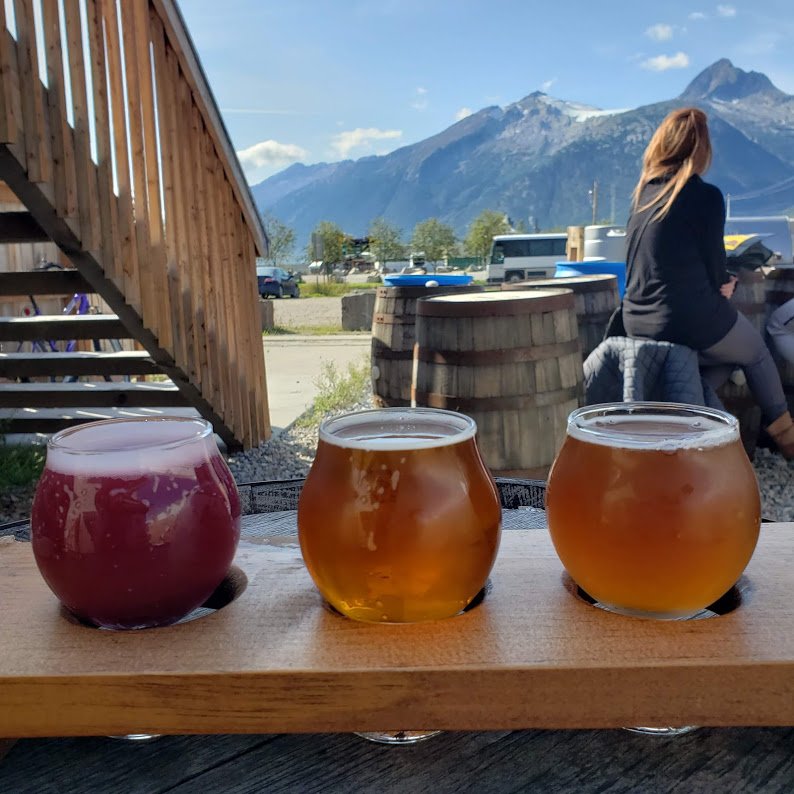 After enjoying our beer and our food we wandered around town a little bit. Skagway is known for being a big gold mining town back in the day… even though no gold was ever actually found there. It also has a famously scenic railroad that leaves from there. The town itself is super tiny now with a population of about 1,000. It’s basically just a tourist town. 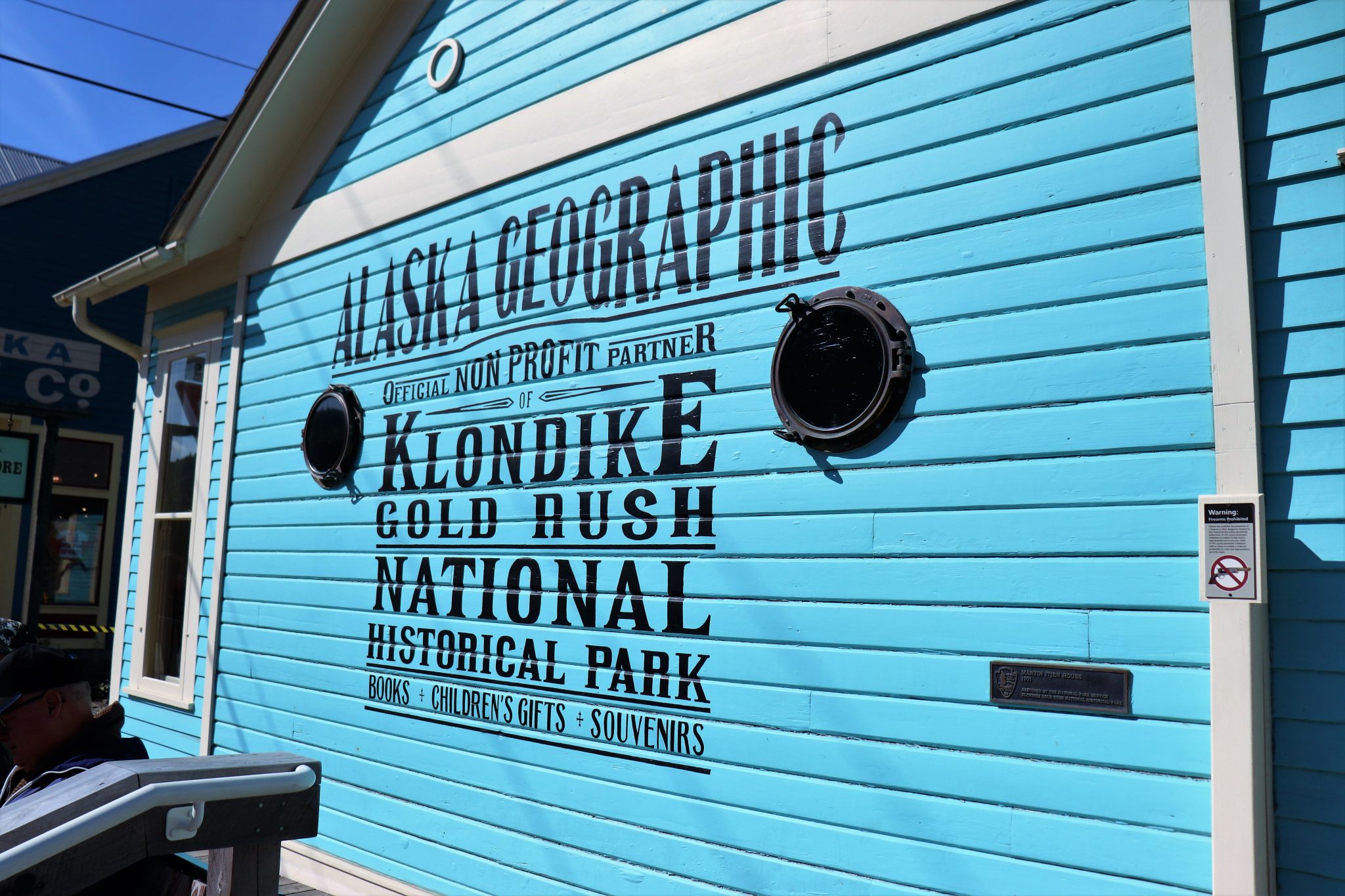 After exploring for a bit we headed back to the ship. Jason decided to spend the afternoon in the rainforest room. Being in marathon training (and finally able to run again without massive pain in my toe!), I decided to change and go for a run out in Skagway. After all, how cool would it be to actually run out around in Alaska? The weather was gorgeous, about 70 degrees and sunny so I just couldn’t pass it up. 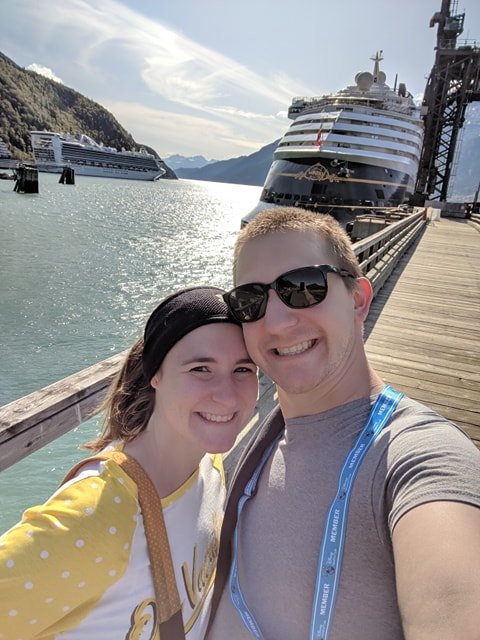 My run was fine, though I probably should have waited a little bit longer after the fish and chips and beer! But I enjoyed exploring Skagway (this is how I realized firsthand the town is SMALL. I was trying to get 4 miles in and had to run up and down pretty much every street that existed…). It was around 3:00 when I was running which meant it was 7:00 back home. On a Thursday that’s when my running group, the Phoenixville Beer Runners, meets! So I was running around the same time as them and then decided I needed to finish my run with a beer – in their honor, of course! This time I stopped at Skagway Brewing. And while it doesn’t have the views of Klondike, I actually preferred the taste of the beers better overall. 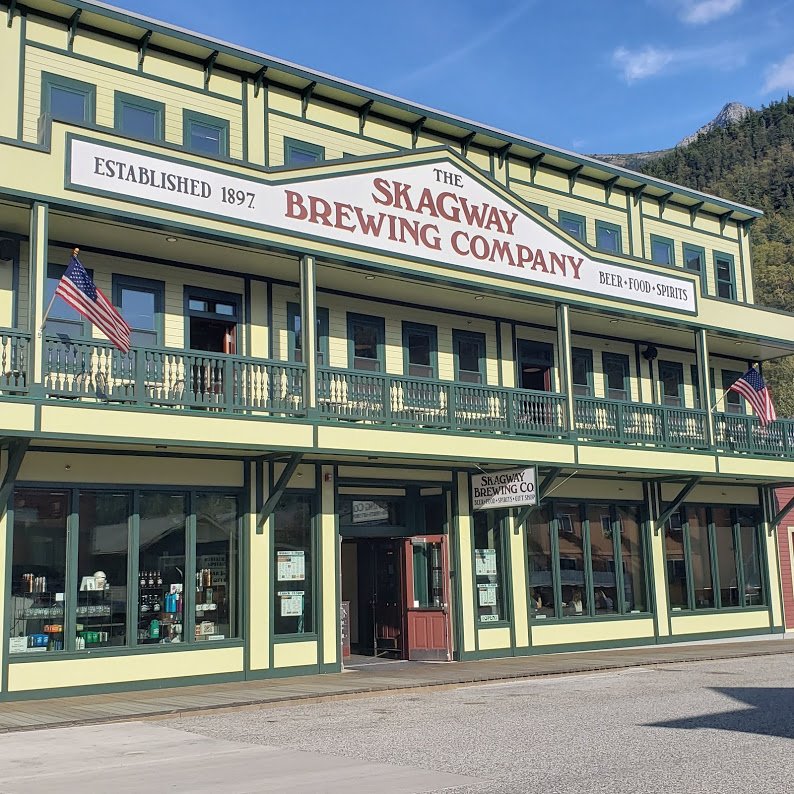 Then it was back to the ship, where I convinced Jason to join me for Lion King trivia. I’ve probably seen that movie more times than any other Disney movie so I thought I would do well… but apparently there are people who are even more hardcore than me! There was a question on two about The Lion King 2, or details about when it was in production rather than the movie itself which I missed. The girl who won was there by herself, no team, and got every single question right. Even the CM hosting the trivia started asking her how she knew all that! (Her response was “Wikipedia”…).

After that we got ready to go to dinner, which was at Triton’s this evening. The themeing here isn’t quite as exciting as some of the other restaurants, but they do have good food. And this is home to one of my all-time favorite desserts: the Grand Marnier souffle!

After enjoying dinner and celebrating Kelcie and Larry’s anniversary (it had been the day before but they went to Palo, so we celebrated at dinner tonight!), it was off to bed to get ready for tomorrow’s adventures. We would be in Juneau the next day and had an extremely exciting excursion planned!

Day 1 – Arrival Day to the Disney Wonder
Day 2 – Day at Sea
Day 3 – Dawes Glacier
Have you ever visited Skagway? What did you do there?