This was probably the day I was most looking forward to on our cruise! For our day in Juneau we had an amazing excursion planned – a helicopter ride up to the top of a glacier and then dog sledding on the snow with Iditarod trained huskies. There had been talks that an excursion like this could get cancelled due to the weather, but we were lucky and everything was good to go.

We met on the ship and our group was led to the bus that would bring us to the outside of Juneau where the helicopters were located. We watched a safety video and were equipped with special shoes for walking on the glacier. Then we were assigned to a few different helicopters. 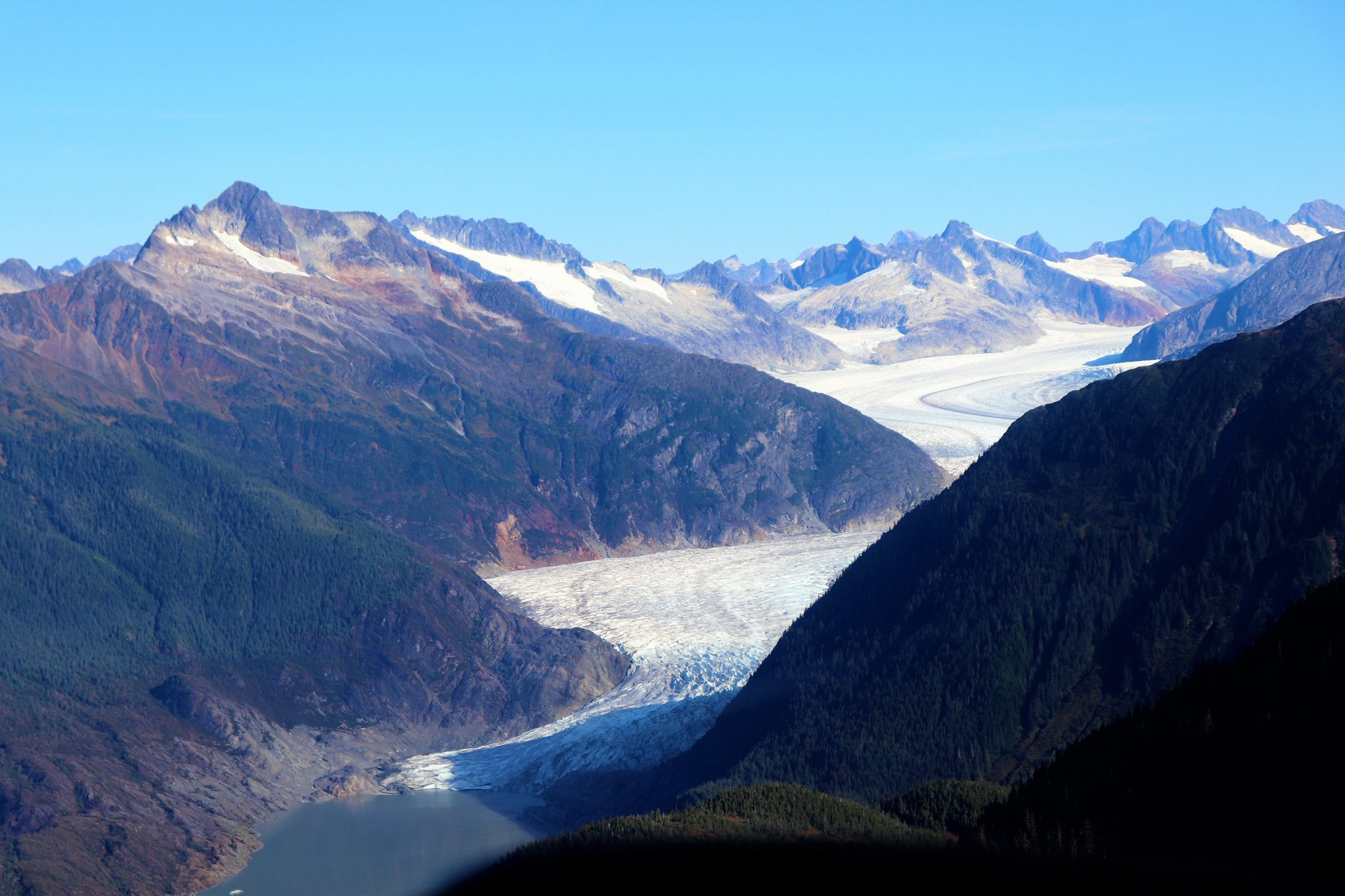 I have to admit I was just a little bit nervous because I don’t always love heights, and I wasn’t sure how I would fare in a tiny helicopter with lots of windows. I’m fine on airplanes and can look out the window but not great just out on top of tall spaces. Turns out I didn’t have anything to worry about because I didn’t feel anxious at all! The views were amazing and the helicopter ride was just so cool. The motion was a little weird/different from what I’m used to, so I did feel a little bit of motion sickness, but it was totally worth it. 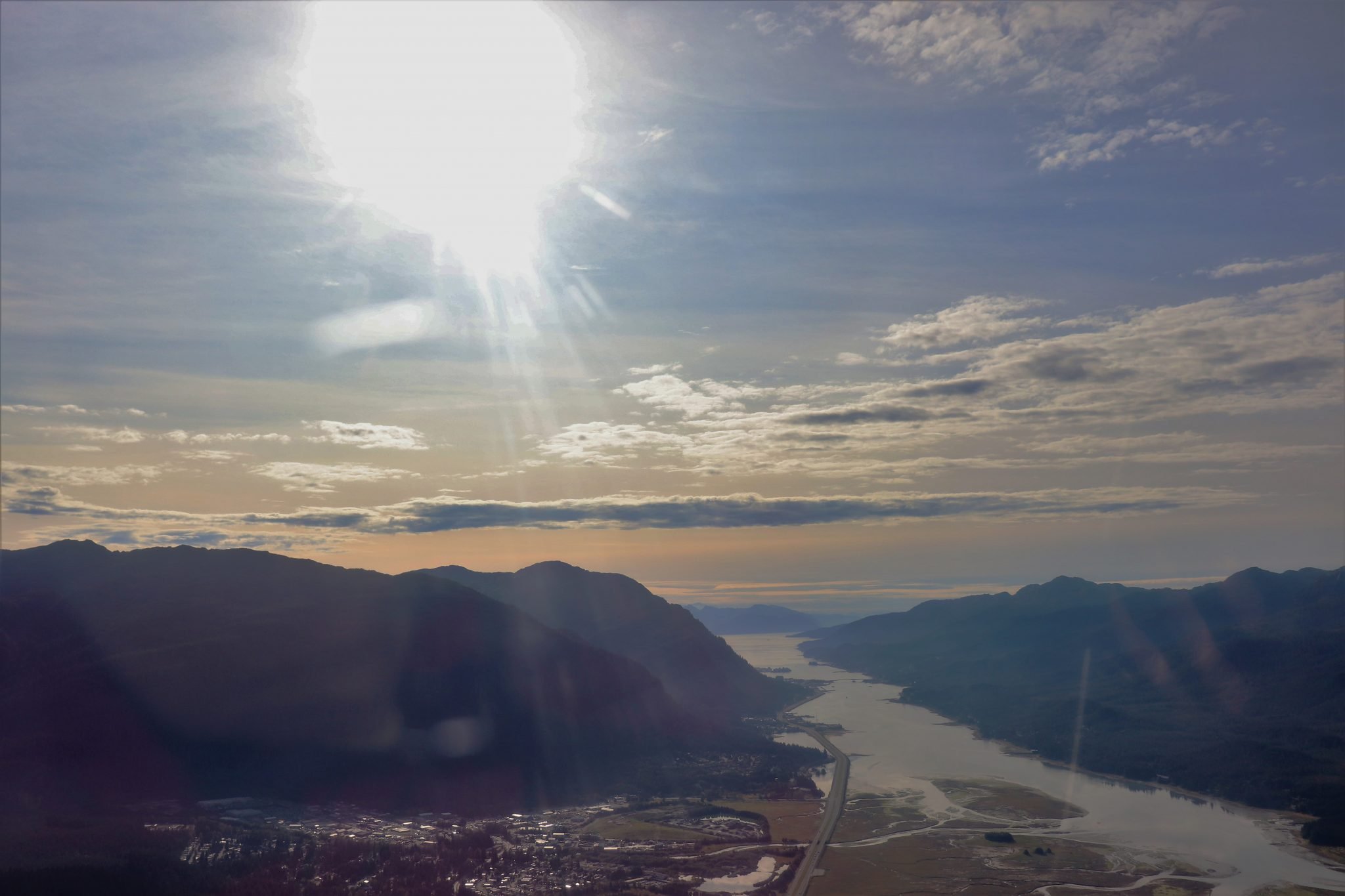 Once our helicopters arrived on top of the glacier we were broken down into groups for the dog sledding. Our musher was a professional dog sledder – in fact, he had participated in the Iditarod in past years and was preparing to do so again. We took our team of 5 huskies out, and while we rode on the sled he told us all about the dogs, how training works, etc. 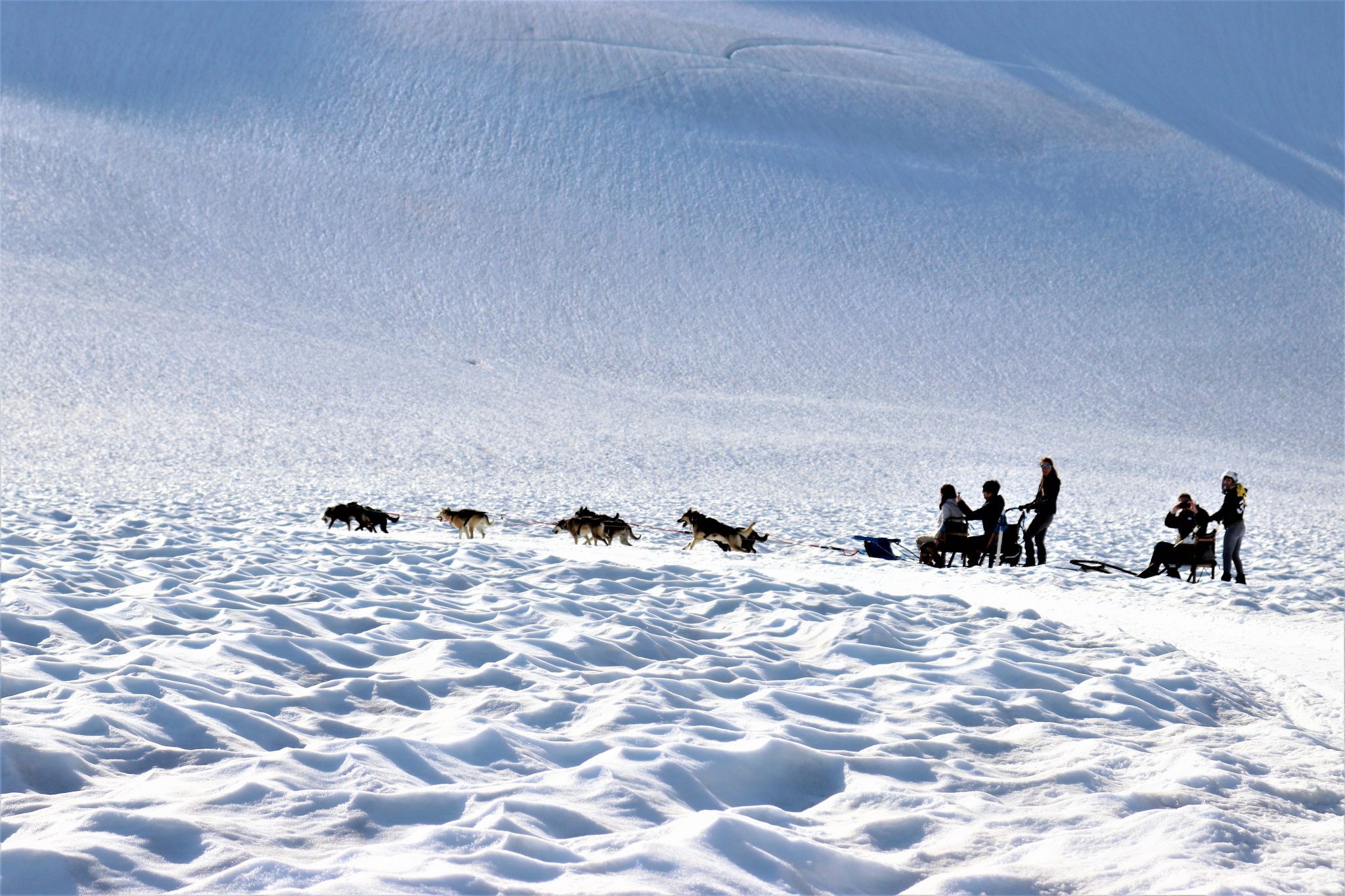 I didn’t know a ton about huskies or dog sledding so it was interesting to learn. They keep the dog camps on top of the glacier obviously because then they have snow up there even in the summer to train on, but also because the dogs really don’t like warm temperatures. They like being in the cold and will roll around in the snow to keep themselves cool. They also need to do A LOT of running, which is why they’re so good for dog sledding. They have lots of extra energy that they need to get out and it turns out the sledding is a great way to do that. 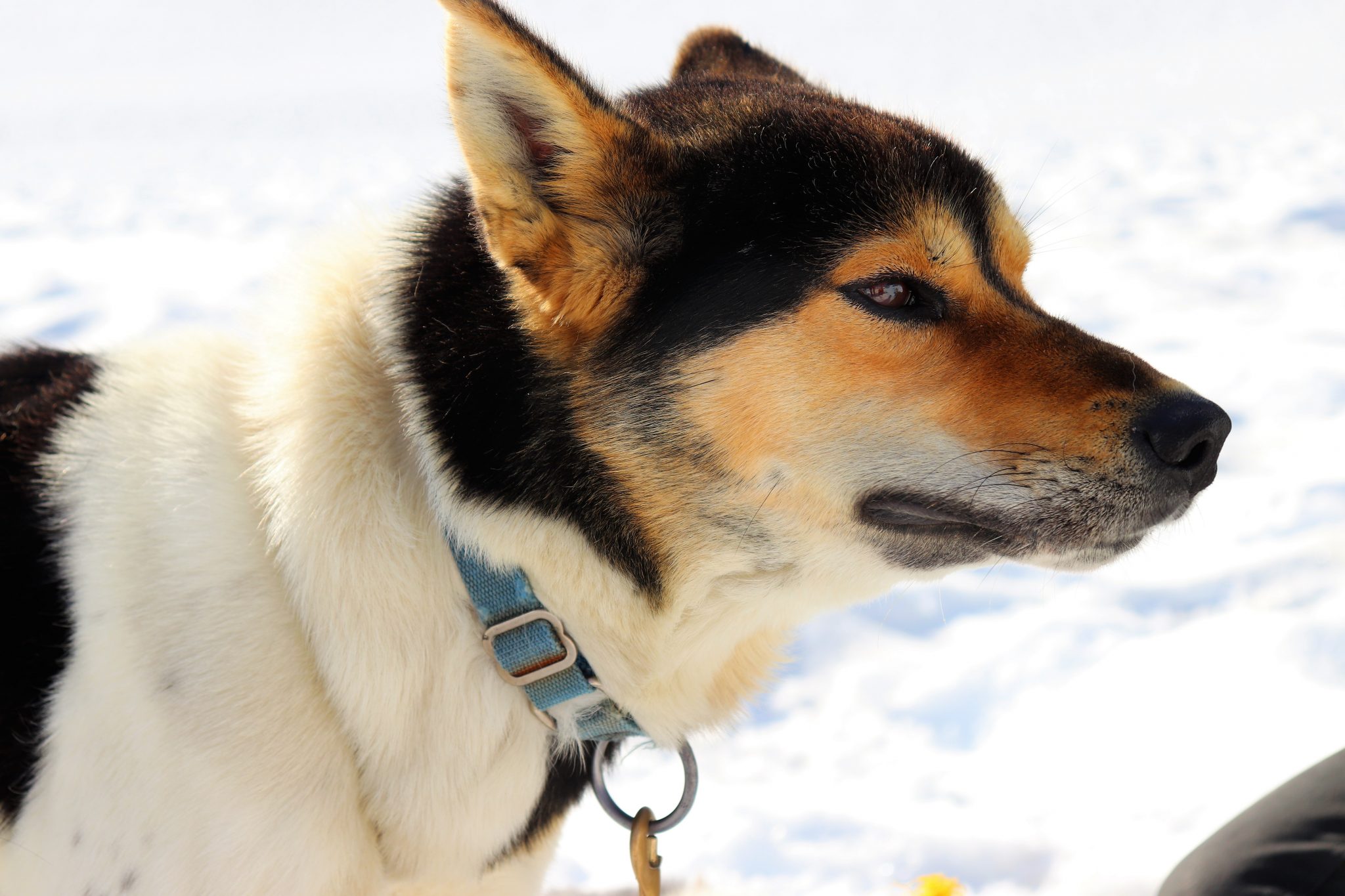 We stopped a few times so the dogs could have a break and we could rotate seats – that way everyone got a chance to sit in the front seat, and everyone also got a chance to stand in the back. During the breaks we also got to pet and say hi to all of the dogs. It was neat to learn about and see all their different personalities, and most of them were super friendly and lovey. 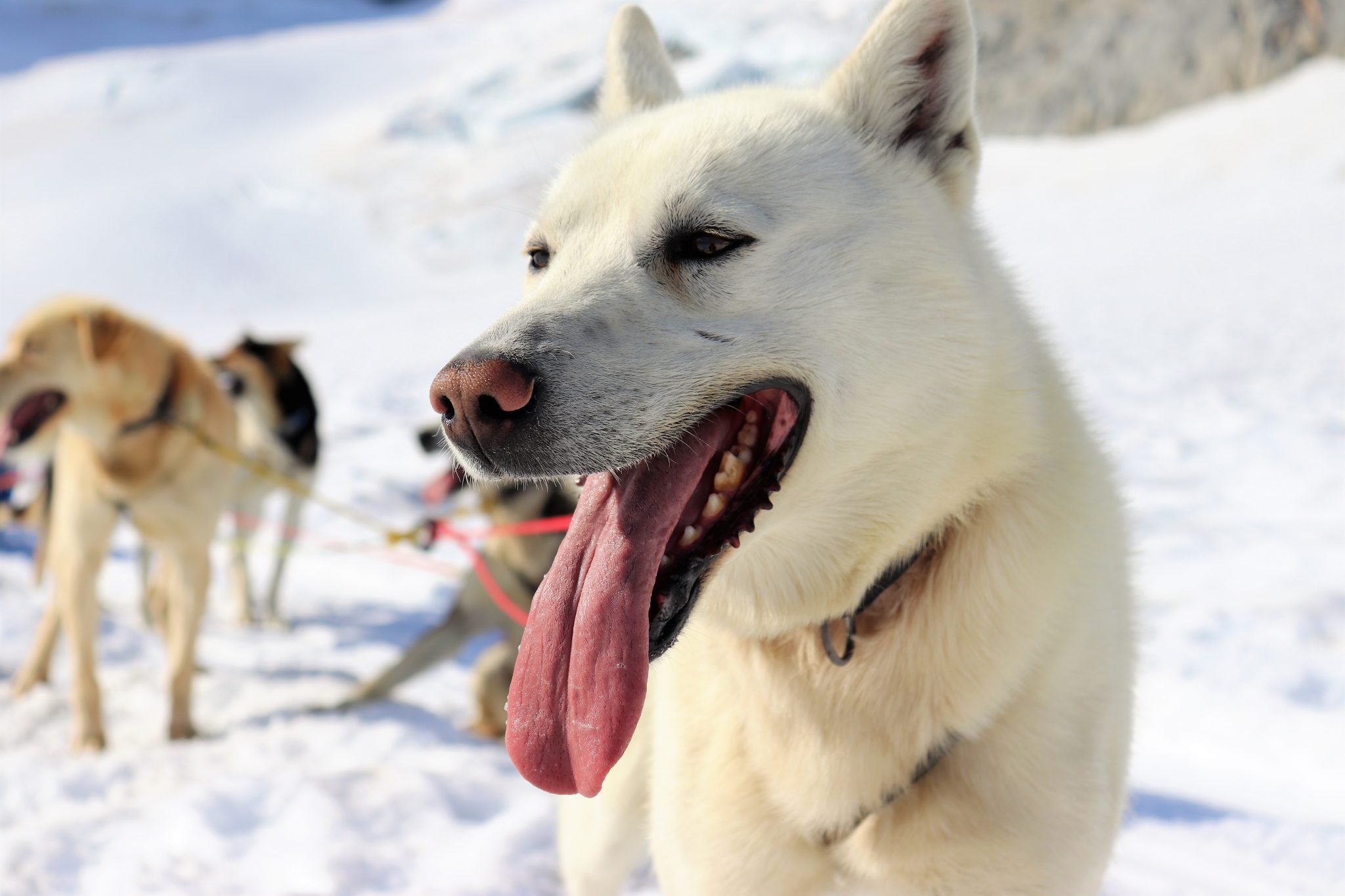 Once we returned to the camp there was one more thing for us to experience – playing with husky puppies! These are the current babies who aren’t old enough to start working yet, so they just get to play and hang out. We were able to hold them and play with them a little. The one guy really liked my scarf and wanted to play tug of war with me! 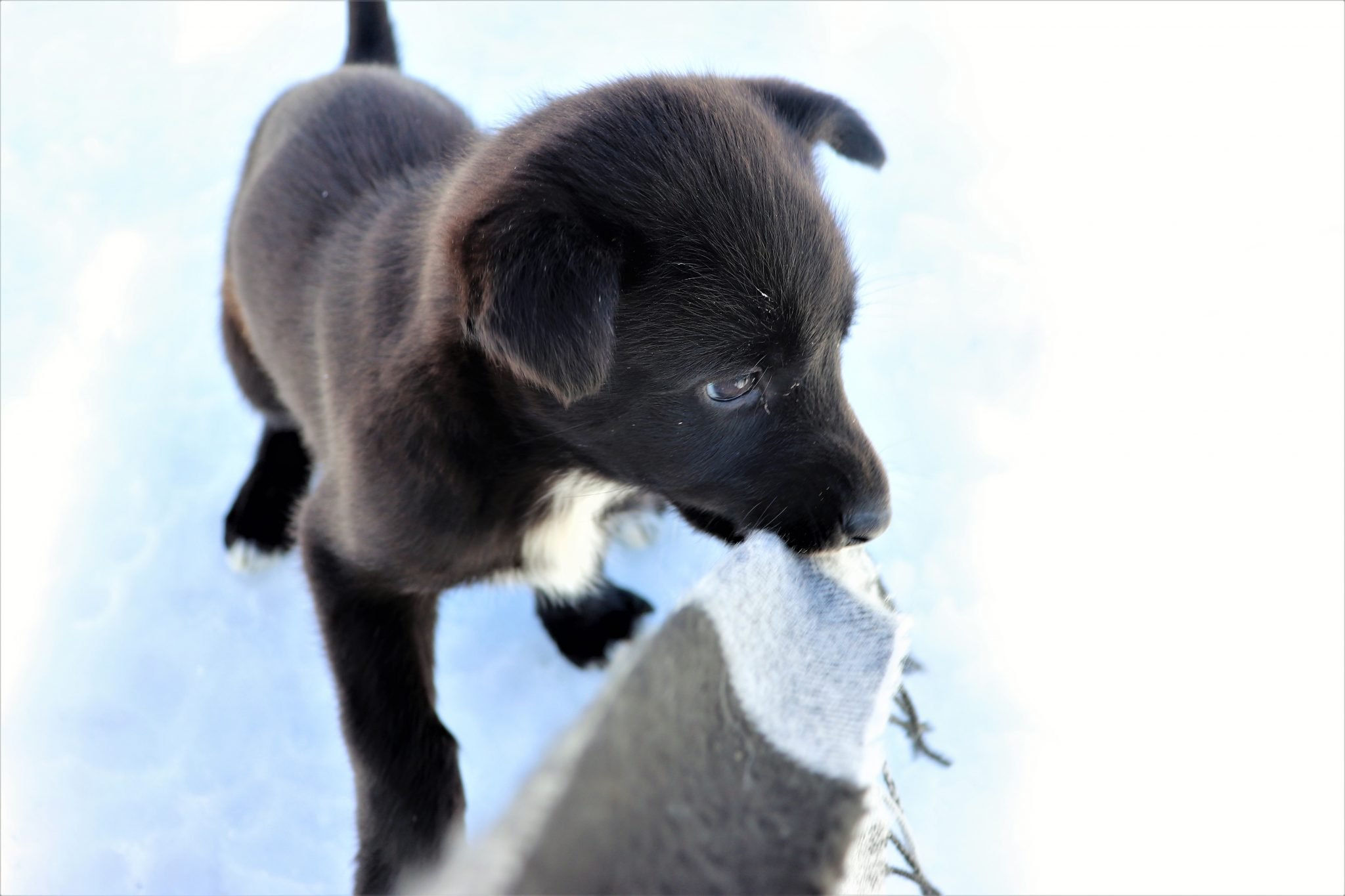 After puppy time we got back on the helicopter to return to Juneau. Somehow I don’t think they would let me take a husky puppy back on the ship with me, even though that would have been the best souvenir 😉 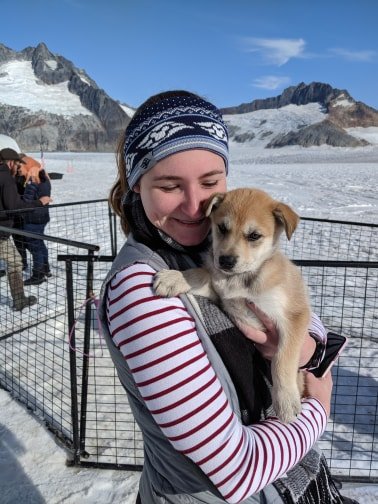 By the time it we got back to town we were hungry and decided to grab some lunch. We headed to the Red Dog Saloon. It’s pretty kitchsy/touristy, but I’m kinda into that sort of thing. They make it feel like a good old school saloon. There’s sawdust on the floors, swinging saloon doors to get in, antlers on the walls. The food was just okay, though nothing special. They had a number of beers on tap and drink specials, so I was glad to be able to try one of the Alaskan Brewing Co. beers there. 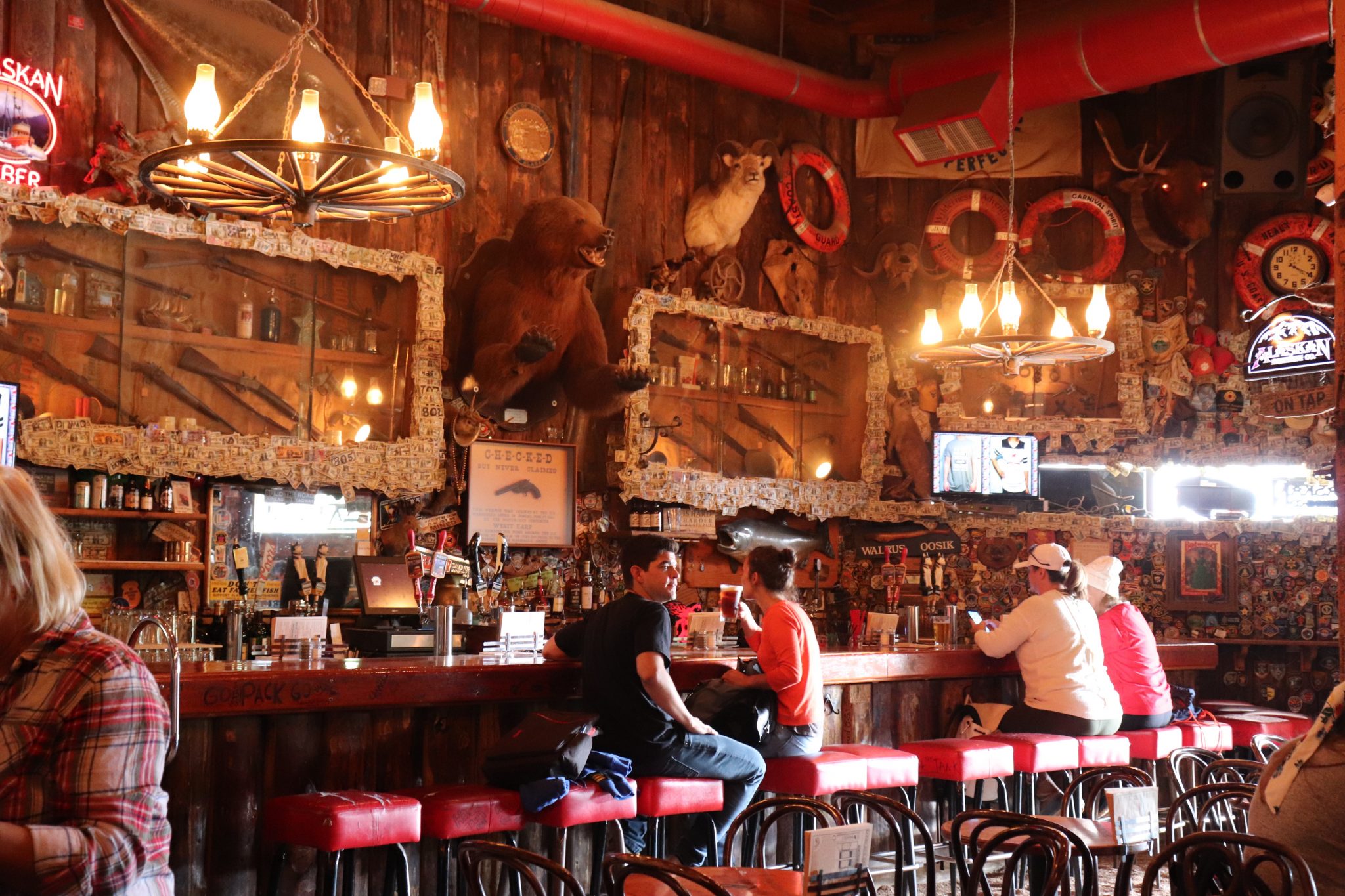 After lunch we walked around a bit. A lot of the shops are very touristy and there are SO MANY jewelry shops. I did buy one thing, an Alaska pandora charm for my pandora bracelet. I was interested in trying to visit the Alaskan Brewing Company brewery, but it turns out that it’s pretty far outside of town. They had a store in the downtown area and offered a shuttle, but the price included a tour and a tasting and I think it was about $25 per person. Jason doesn’t really like beer so it seemed like a waste for him, and you couldn’t get the shuttle without the tasting. I suppose we could have done uber or something, but at that point it seemed like too much of a pain so we just skipped it.

Instead I found another nearby brewery and we headed there. This one was called Devil’s Club Brewing. They had a lot of interesting sounding beers on tap so I got a flight. Their food menu looked pretty good too but since we had already eaten we didn’t try anything here. After I enjoyed my beer and Jason just kept me company, we decided it was time to go back to the ship. 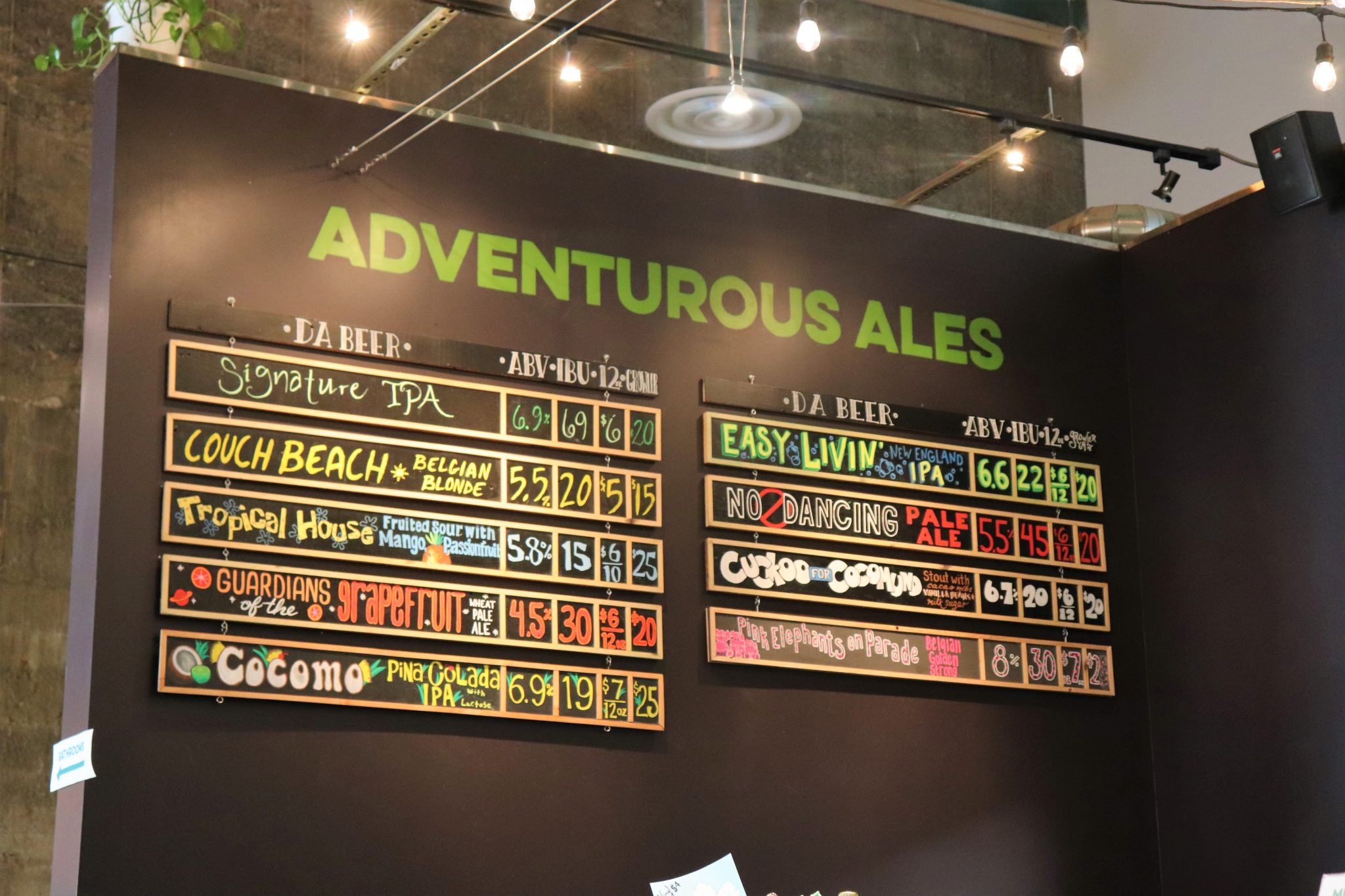 With some time before the show that night, we decided to head up to the deck to get some drinks and check out the hot tub! The hot tub is great no matter what the weather, but it was about 70 degrees outside so it was pretty pleasant no matter what. We ended up chatting with another guy in the hot tub for awhile, and were there when the ship pulled out of Juneau so we got to watch the sailing away. 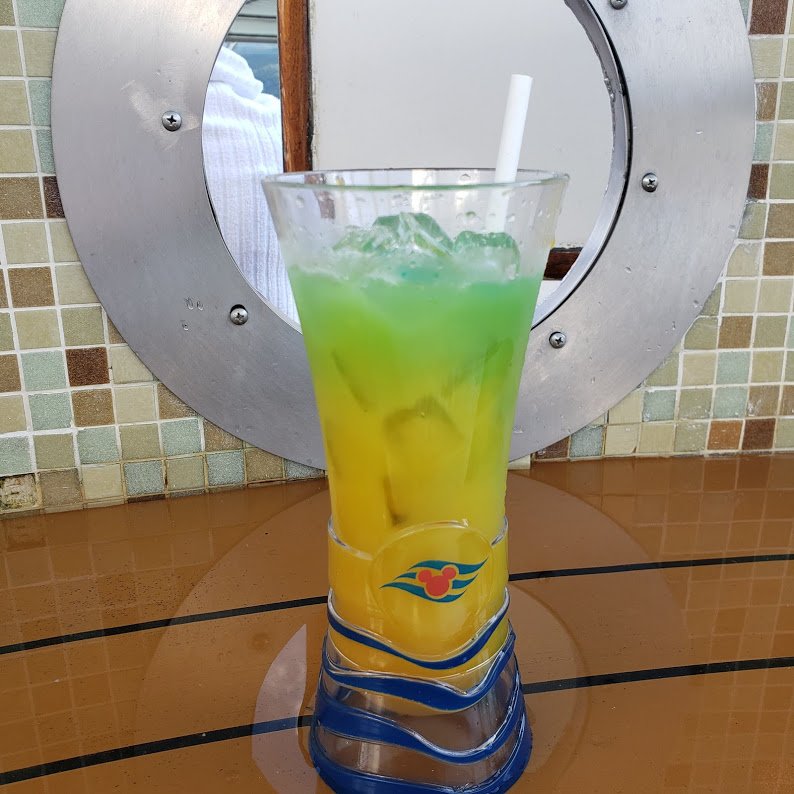 Then we had to get dressed for the show and dinner! We went to the theater that night because they were doing their Frozen: A Musical Spectacular. The productions on Disney Cruise Line are always fantastic and this is no exception – about an hour long re-telling of Frozen in a stage musical form. We enjoyed it a lot, though we’re a little spoiled with having seen Frozen on Broadway. 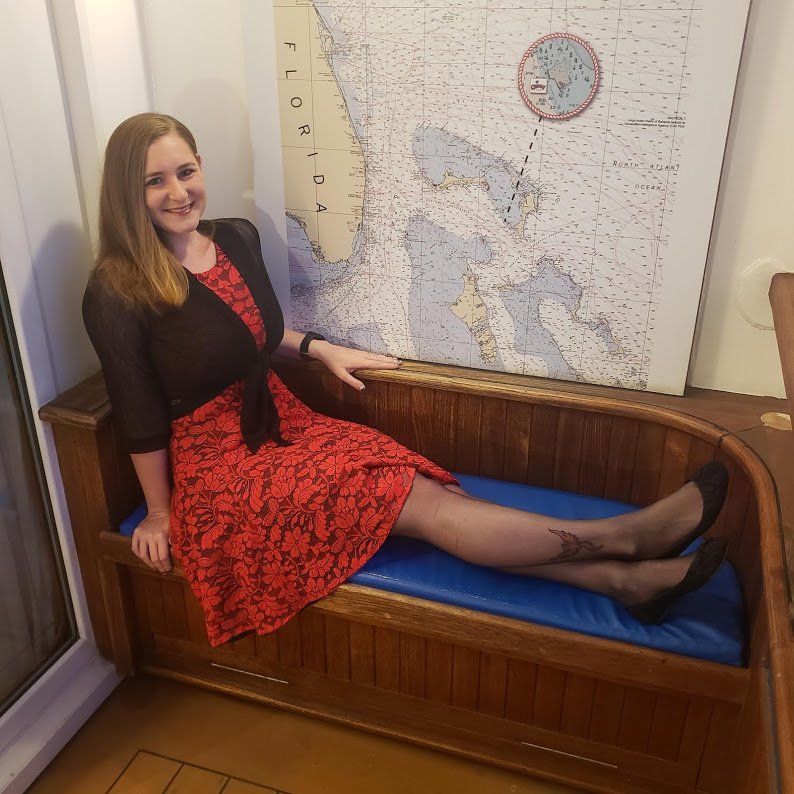 Dinner that night was back at Animator’s Palate! It was a special night though, because they gave us a piece of paper to draw our own character. Then at the end of the night they actually put our drawings up on the screen and “animated” them! 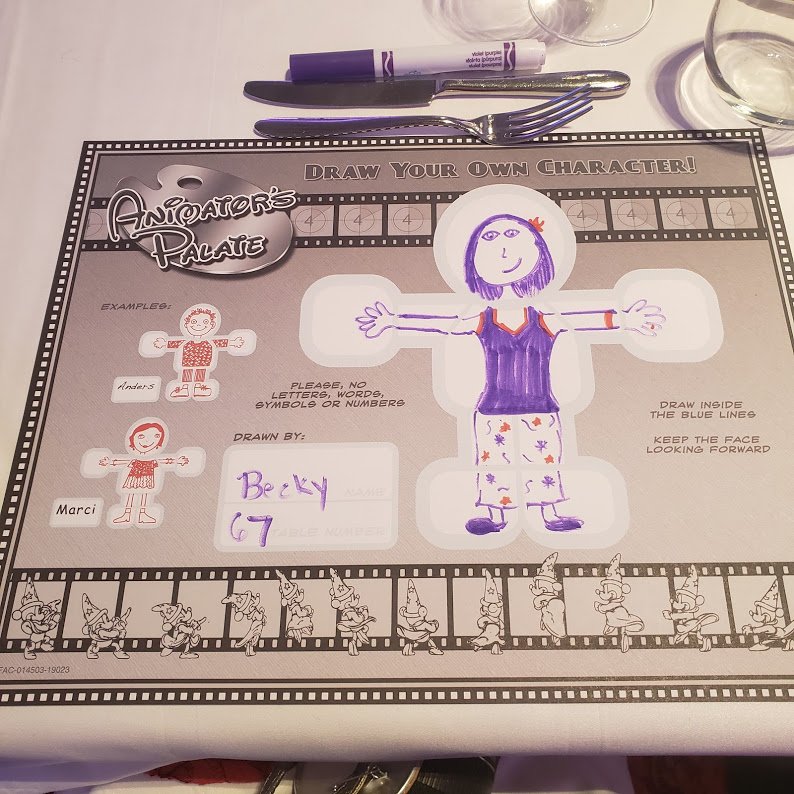 The food was very good that night too. I had a nice caprese appetizer, and really enjoyed my pasta and shrimp meal. The beef wellington also looked excellent. Then we headed back to the room to get ready for bed – we had another day in port tomorrow but didn’t get in until 11am, so we’d be able to have a leisurely morning! 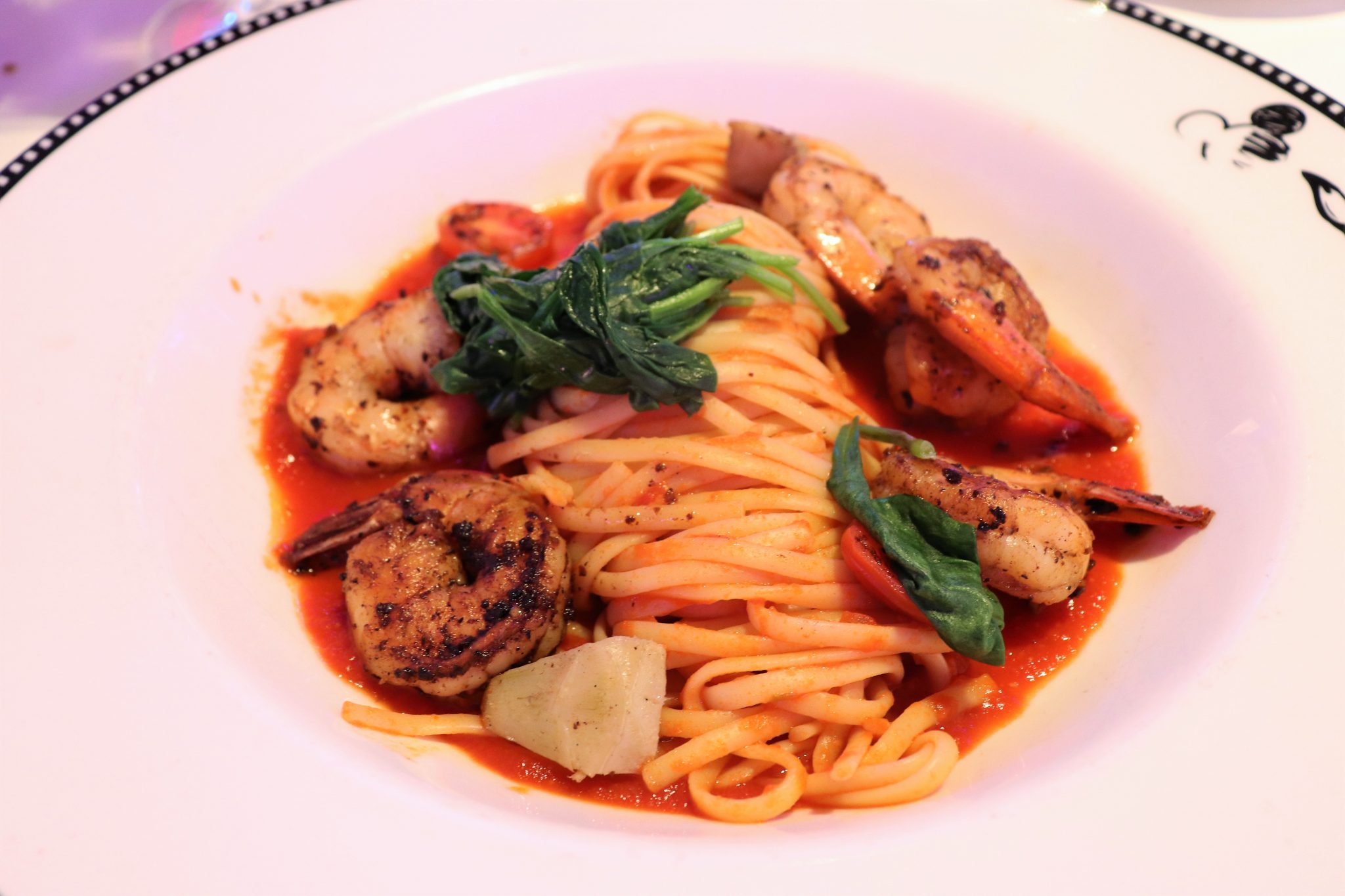