You are here: Home / Disney Springs / Dining at Morimoto Asia 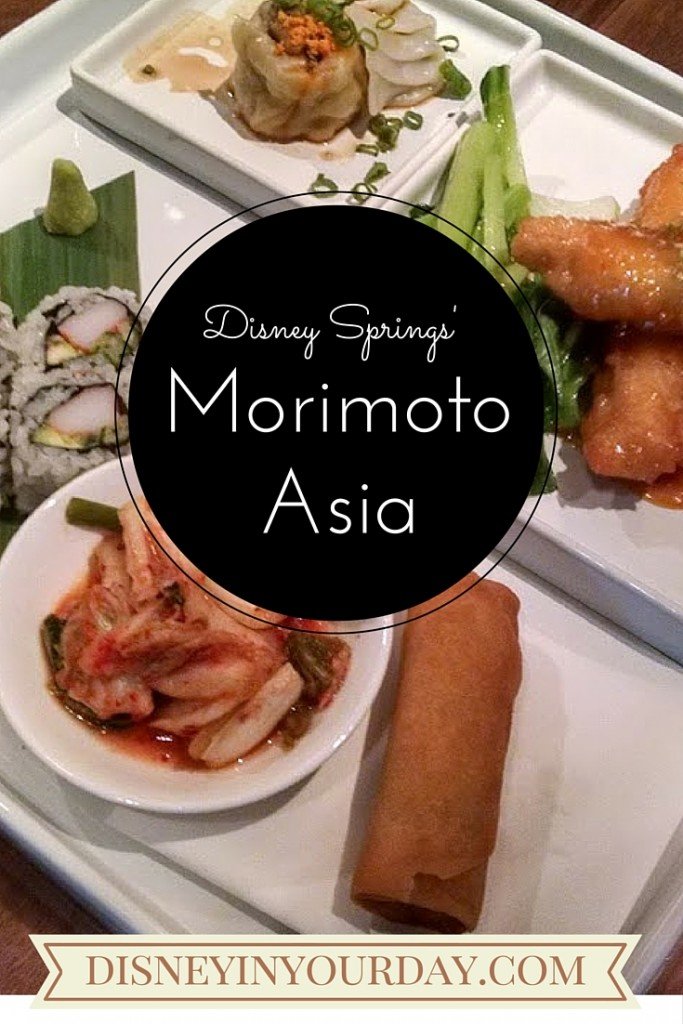 During my last Disney trip I got the chance to have lunch at one of the newest Disney World restaurants – Morimoto Asia in Disney Springs.  I dined with a group of friends, which means I have a number of dishes to share with you!

The restaurant is really stunning when you first walk in.  There are these beautiful crystal chandeliers hanging from the ceiling in the middle of the dining room.  One of my friends who had eaten there on opening weekend explained that there are crab cages inside of the chandeliers if you look closely!  The place has a very modern feel to it while still being classy. 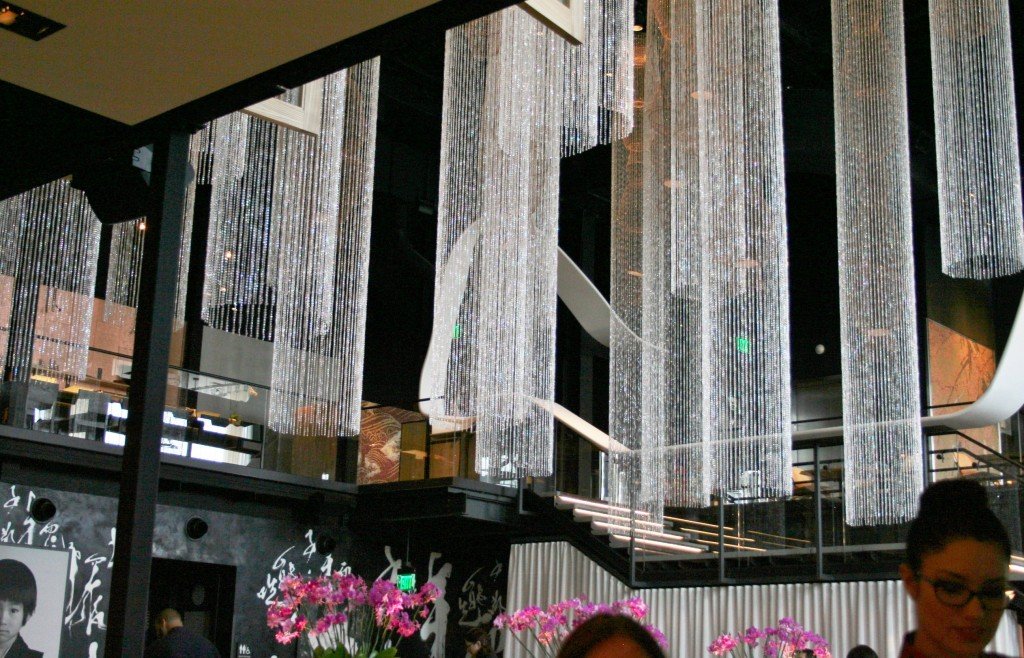 There are lots of appetizers and dim sum, as well as sushi rolls and entrees.  We ordered a wide variety of things.  They asked us if it was okay to just bring stuff out as it was ready, since that’s how it’s typically done in a place like that.  It was fun, kind of like a party, just having stuff come out randomly – but it did mean that we were getting some appetizers along with or even after the entrees.

To start off our meal a couple of us decided to order a pitcher of the sake sangria to share.  It’s described as “asian pears, apple plum, tangerine juice, sake, light white wine, plum wine.”  It says serves 3-4 people and it definitely does – it seemed like the pitcher was never ending!  The sangria was good but stronger than I’m used to for sangrias (which usually seem like they are all fruit juice).  It’s also not as sweet as you’d expect from sangria.  We requested some simple syrup to add to sweeten it up a bit. 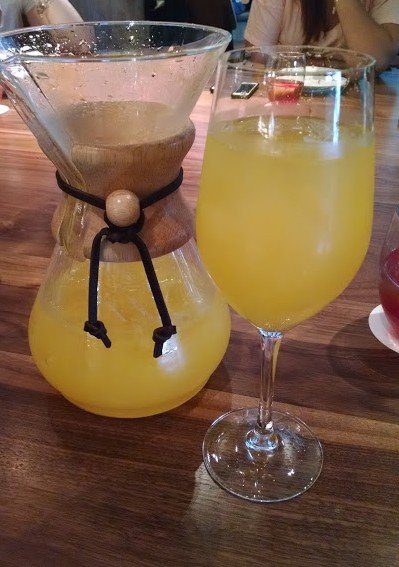 There were a couple of appetizers on the table.  The first was the Crab Rangoon – crab and cream cheese spring roll, apricot sweet chili sauce.  In appearance they were different than the typical rangoon, but my friends enjoyed them very much (I don’t eat cream cheese). 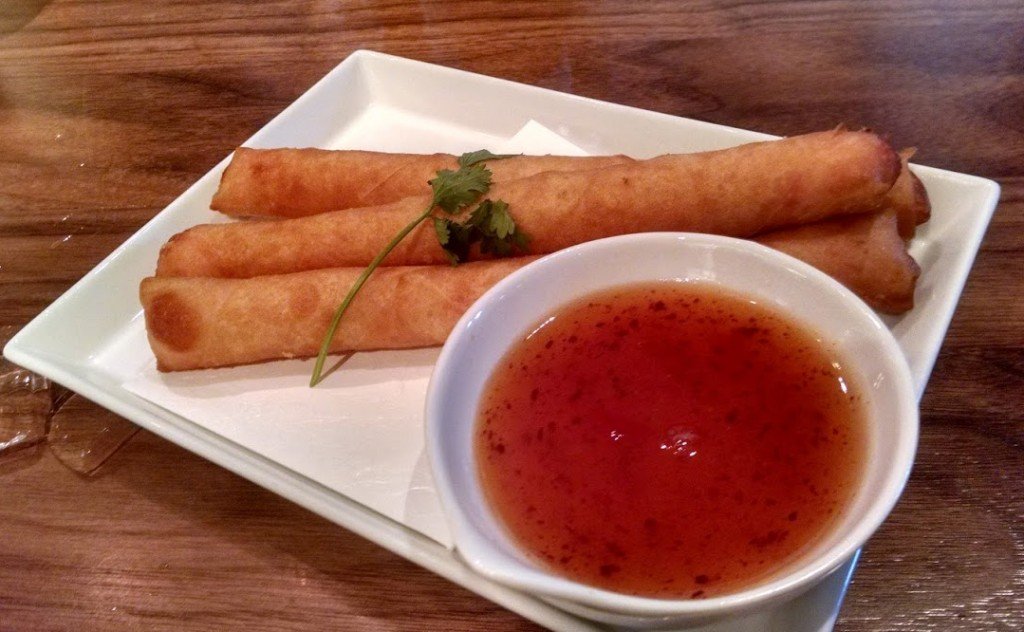 Another appetizer was the Rock Shrimp Tempura – signature tempura rock shrimp, spicy gochujang aioli.  It was very good but definitely a bit spicy so be aware of that.  It’s pretty typical to an appetizer that appears in a lot of restaurants now (also known as dynamite shrimp, bang bang shrimp, etc.) 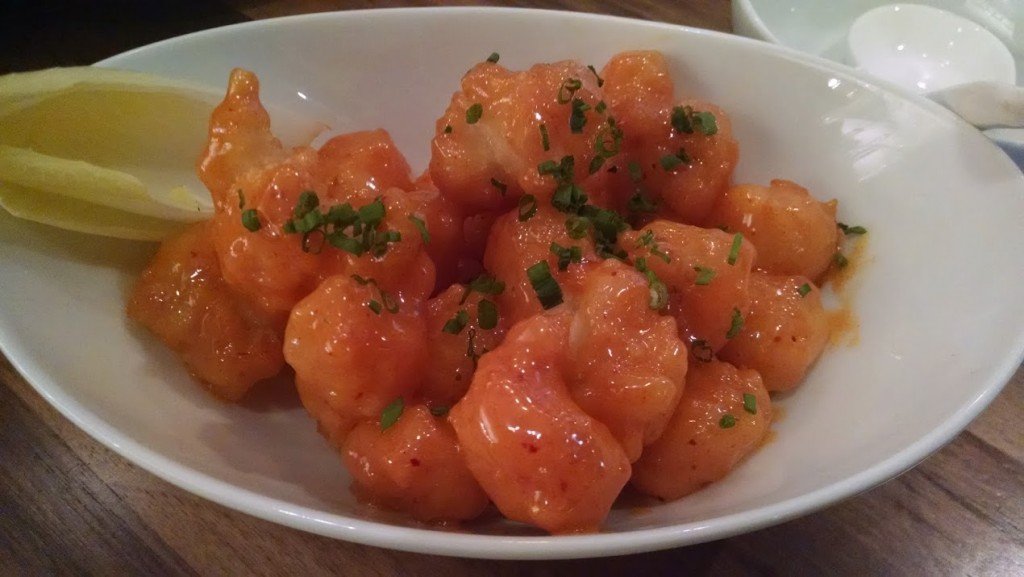 Then there were the chicken dumplings – chicken, napa cabbage, scallions.  I never got a bite of these (too full from everything else!), but I heard good things about these as well. 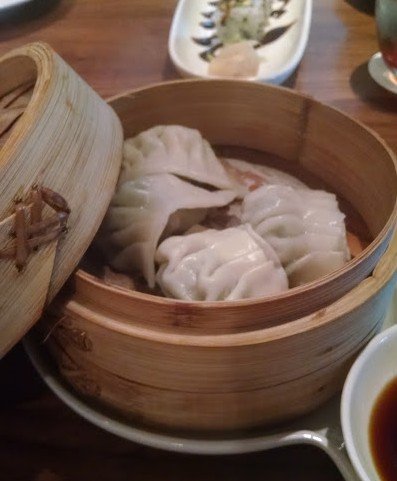 Finally one of my friends ordered the bento box lunch combo, which gives you a little taste of a number of things.  That meal started with the house salad and miso soup. 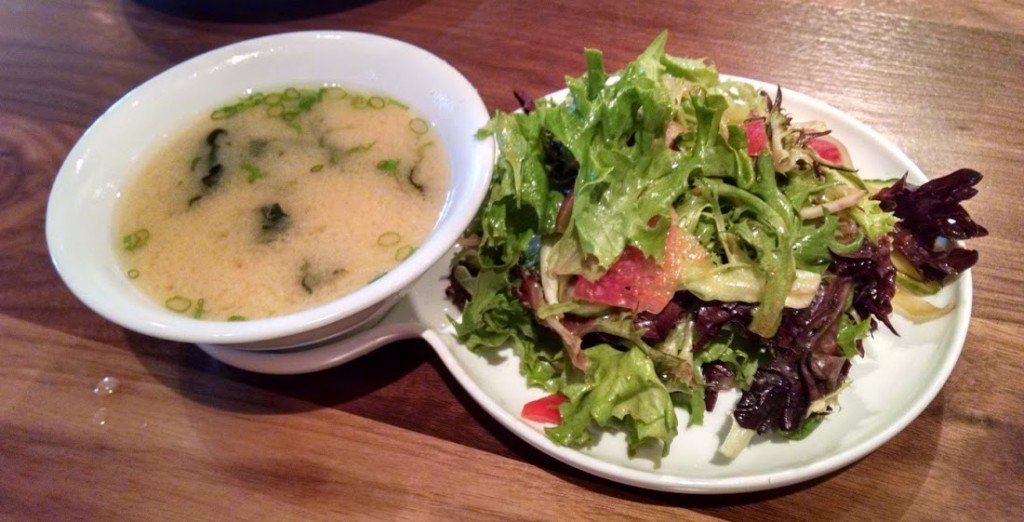 In addition to the soup and salad the lunch combo came with a California roll, dumpling, kimchi, and choice of Orange Chicken, Kung Pao Chicken, Braised Black Cod, or Vegetable Tofu Medley.  My friend got the orange chicken.

For my meal I got two of the sushi rolls – the Spicy Yellowtail (japanese yellowtail, spicy mayo, scallion with choice of white or brown rice) and the Spider roll (tempura, soft shell crab, spicy mayo, cucumber, asparagus with choice of white or brown rice).  They were both good but nothing super special.  All of the sushi on the menu is fairly commonplace.  I would love to see them get more creative with the sushi here, especially with Morimoto in charge. 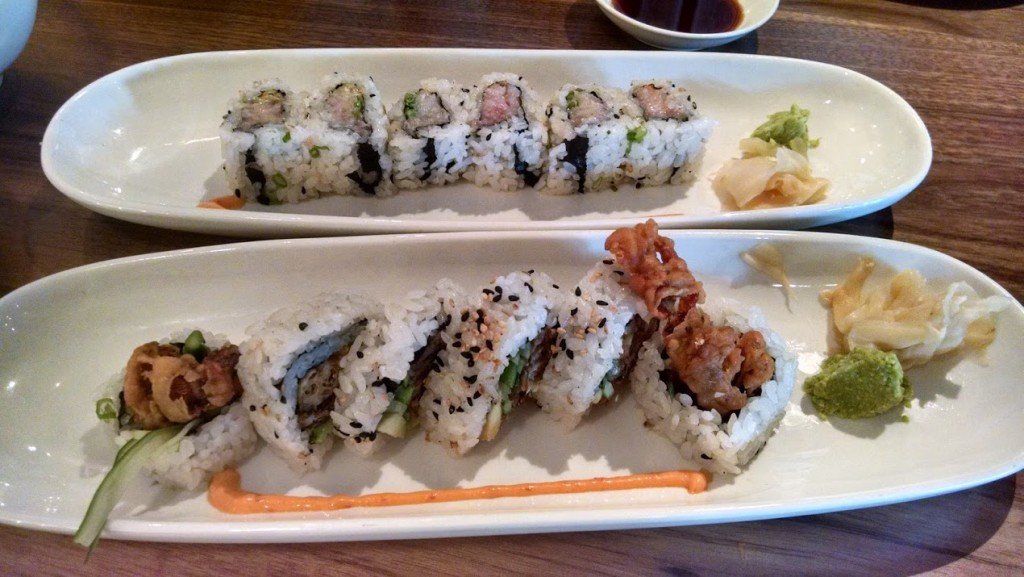 Two people at our table ordered the Singapore Laksa Noodle – creamy coconut and spicy curry, rice noodle, chicken meatballs, soy marinated egg.  I had a taste of this and it was so good!  A little sweetness with the coconut and a reasonable level of spiciness.  I love a good combo of sweet and spicy.  If I go back (and I definitely will), this is what I would order. 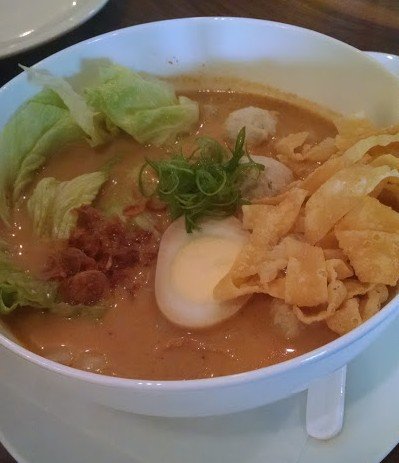 Another friend got the Lo Mein noodle – stir-fried egg noodles, napa cabbage, carrots, bean sprouts, mushrooms, scallions.  I didn’t get a chance to try this one but it was absolutely the prettiest Lo Mein I’ve ever seen!

Finally there was a side of fried rice on the table.  I heard it was just okay – pretty typical fried rice.

Overall I had a great time at Morimoto Asia and enjoyed the food a lot!  Even though my entree didn’t blow me away, a lot of the other food I tried was really good and I would definitely like to go back here and try more!

What looks good to you?  Would you be interested in dining at Morimoto Asia?