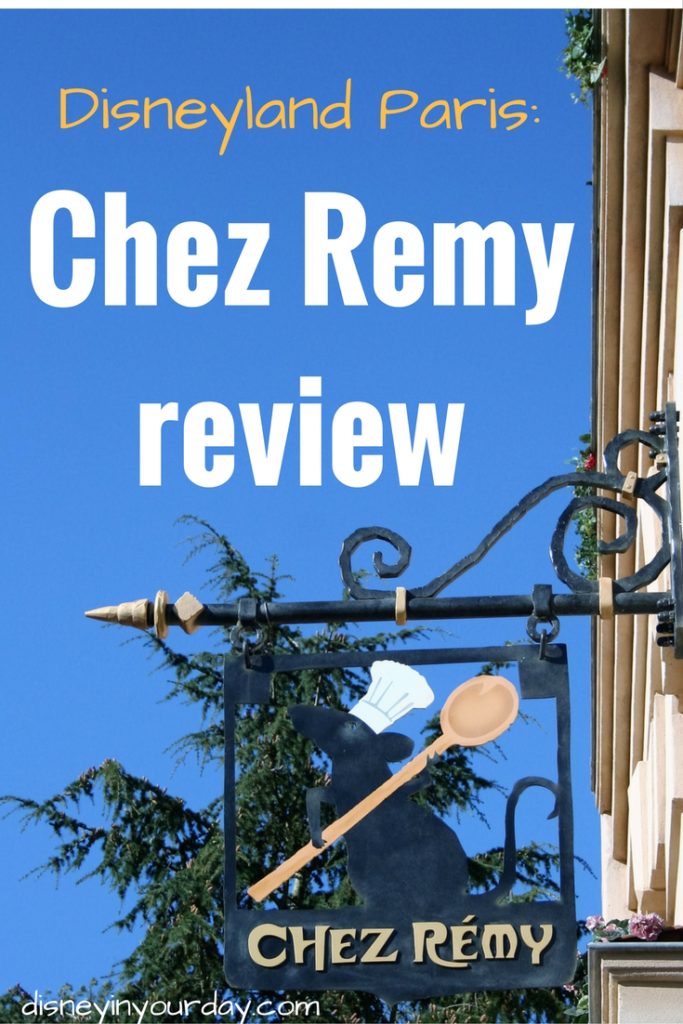 The newest restaurant in Disneyland Paris resort, Chez Remy is located in Walt Disney Studios in the new Ratatouille section of the park.  It makes perfect sense for them to build this, because of course the movie takes place in France and is centered around food.  Sounds like the perfect Disneyland Paris restaurant! 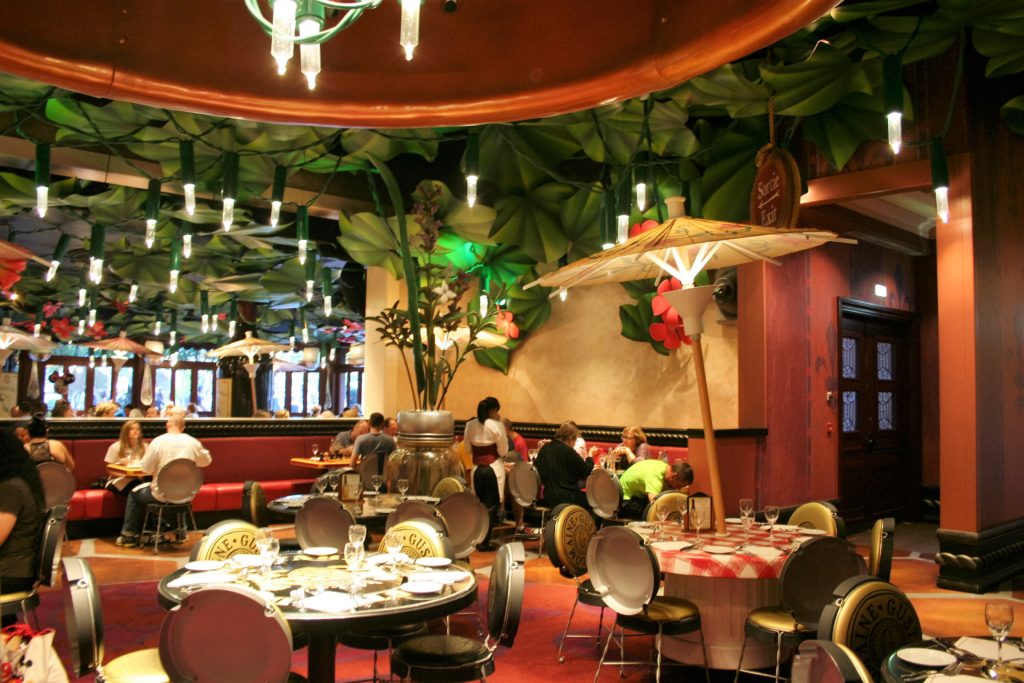 The themeing inside is absolutely incredible.  The idea is that you’ve been shrunken down to the size of a rat, and you’re dining at Remy’s restaurant for all his rat family and friends.  You see a glimpse of this restaurant at the end of the film, and it’s really well re-created here.  Another great touch is the fact that it’s located right next to the Ratatouille ride.  The ride actually ends with you “visiting” the restaurant on a screen, and then when you exit the ride there’s actually windows into the restaurant they really built!  It’s such a cool transition and one of those awesome Disney touches. 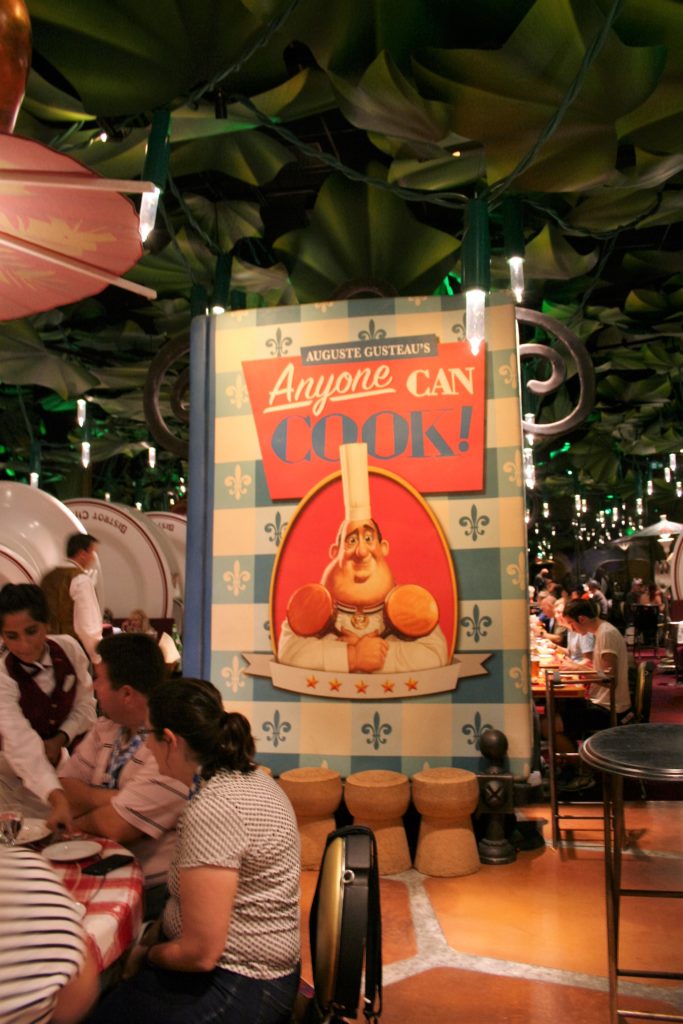 Since you’re rat sized everything looks a little different in Chez Remy!  Our table was the lid of a tea tin.  There are umbrellas above some of the tables that look like little paper cocktail umbrellas.  The lights are like Christmas tree lights and the chairs are bottle caps.  And of course there’s a large copy of Gusteau’s “Anyone Can Cook” cookbook!  It’s clear they put a lot into the design of this place and it shows.  Every little detail is incredible.  It’s one of the best themed Disney restaurants I’ve ever seen from any theme park.

While the food was good, it didn’t quite live up to the amazingness of the décor.  In Paris it’s very common to find set “menus.”  You pick out a starter, main dish, and dessert for a set price from a couple of choices on the menu.  There’s usually an a la carte menu too.  Remy’s did not have an a la carte menu, but only two set menus.  The cheaper one was 40 euro, had no choice on the starter, and 3 options for the main course (steak, fish, or tofu).  There were about 5 or 6 dessert options and a non-alcoholic drink included.  The more expensive menu was 60 euro, only one starter (foie gras), the same basic choices for the main (a better cut of steak, a better type of fish, and a vegetarian option).  You can also get each menu for a little bit less without a drink or dessert.  That was the extent of the menu.  I was a little surprised with how limited it was, especially since every other place we visited which had set menus also had more choices a la carte. 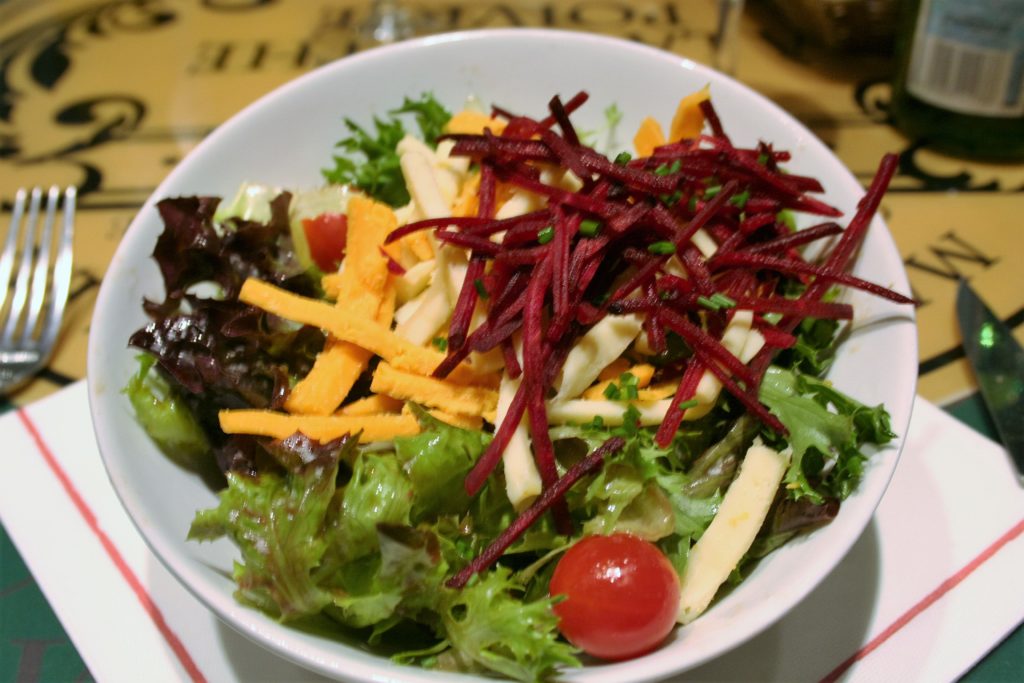 We both went with the 40 euro menu, as 60 euro is a lot of money! (You’re talking about $75 per person for the meal).  The salad we started with was actually very good.  I really enjoyed it and it was probably my favorite part of the meal. 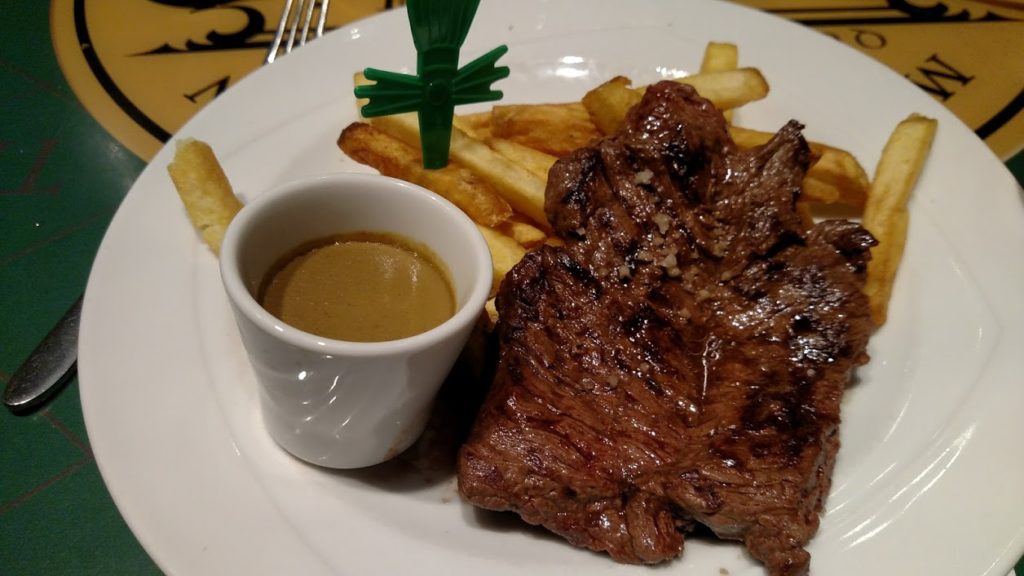 We both went with the steak for dinner.  It was a good steak, if not outstanding.  It was a very flat steak which I think made the cooking temperature a little difficult.  We both asked for medium but what we got was mostly well done.  Not a huge deal as we still enjoyed it.  The steak was served with French fries which seemed like a bit of an odd choice given that the movie is based on upscale dining.  Even mashed potatoes would have seemed a more fitting choice.  I love French fries but I generally get them when I’m eating chicken nuggets or a burger. 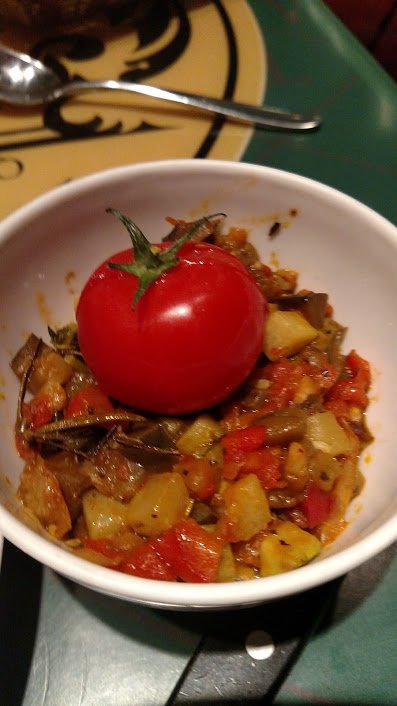 Every entrée was served with ratatouille, which makes sense!  Of course if you come to Remy’s restaurant you want to try the ratatouille.  The pricier menu had a fancy ratatouille which actually looked like the one from the film.  We got a more authentic one of chopped up vegetables.  They had good flavor and it’s nice to be able to say we actually ate ratatouille at Chez Remy’s! 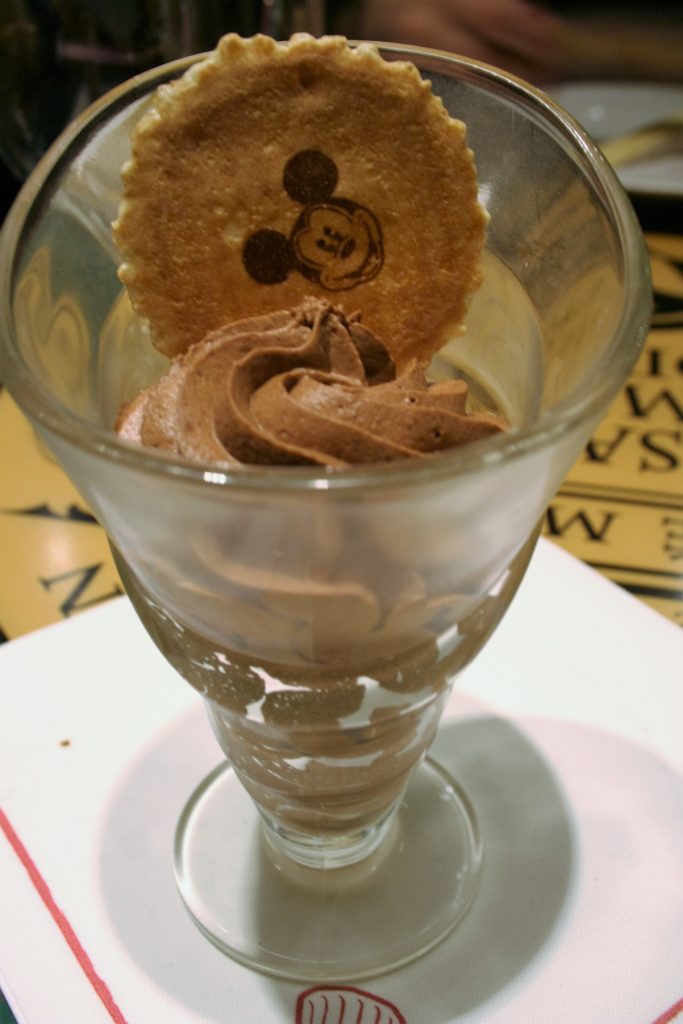 The desserts, unfortunately, were the biggest disappointment of the night.  I got the chocolate mousse which was just very one note and boring.  Even serving it with a side of raspberry sauce would have been good.  Jason got the cheese instead of a dessert.  The menu said it was a brie but it was a super stinky brie and he didn’t care for it.  There weren’t really any interesting choices on the menu.  I almost went for the chocolate cake, but the whole table next to us ordered that and it looked very dry – none of them ate more than half of it.  Even the more expensive menu didn’t have different dessert options.  At a place like Chez Remy I would expect some better French desserts, like a crème brulee or something! 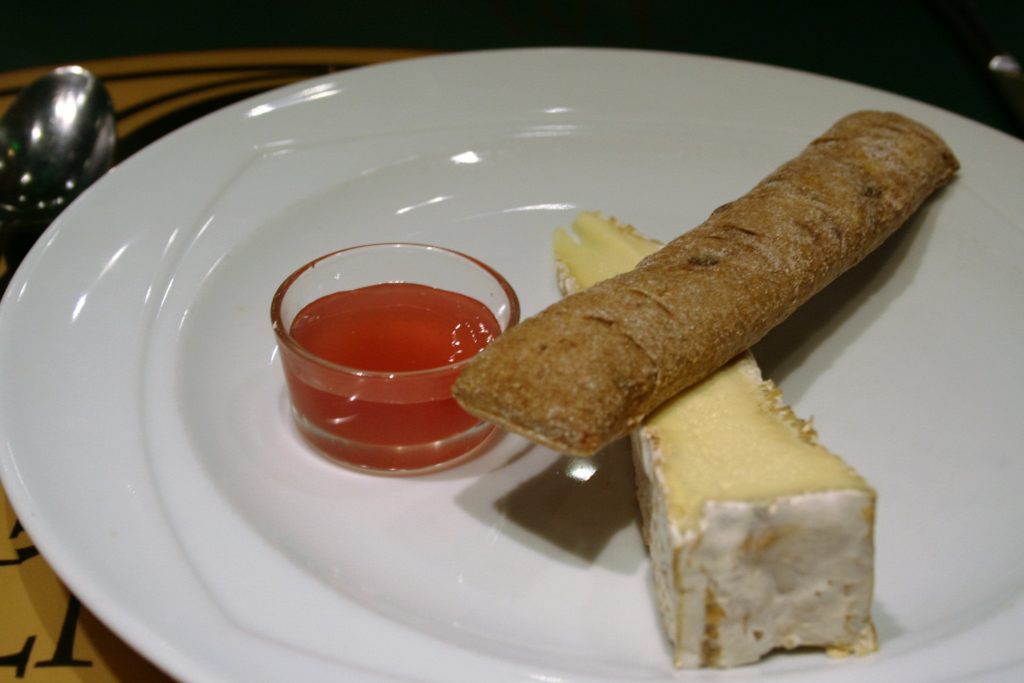 I will say our server was very good and the service here was a lot faster than any of the other restaurants we tried.  They were very busy so I’m sure they wanted to turn the tables over quickly.  Plus with the set menu they only have a couple of items to prepare.  It was pretty clear nothing was made to order, and rather was just being mass produced on an assembly line.

Basically with everything here you ate it and said, “hmm, this is good” and not “mmm, this tastes delicious!”.  While nothing was bad, nothing was really outstanding either.  Maybe we would have had more luck with the more expensive menu but again, that’s an awful lot to pay for a theme park dinner. 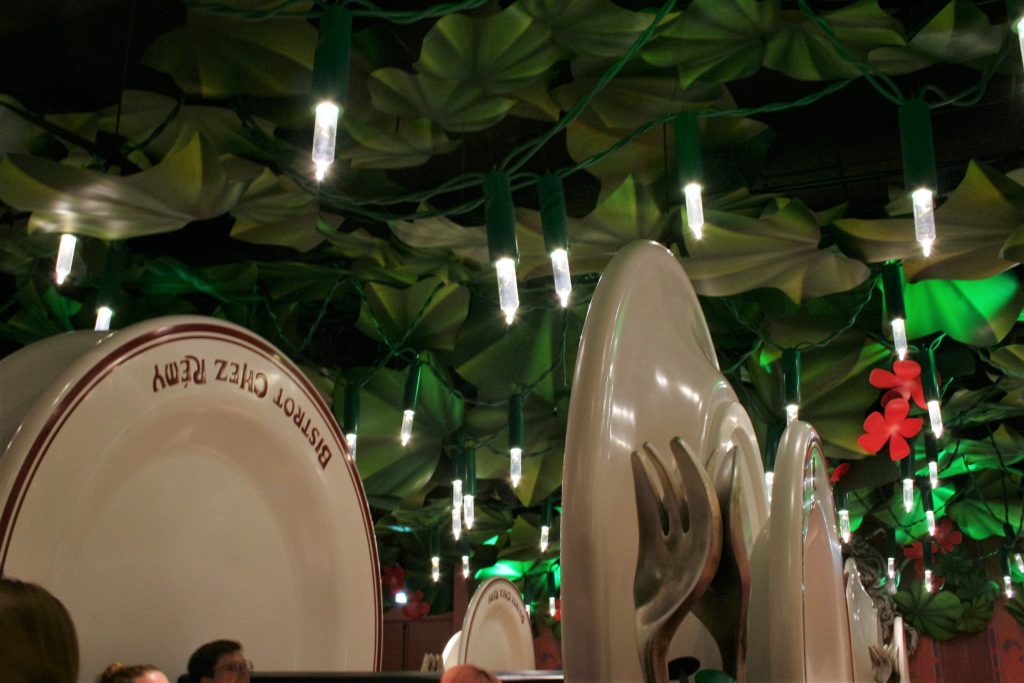 In the end I would still recommend going to eat at Chez Remy because the atmosphere is just so fun, and the food is good if not great.  You just don’t feel like you’re getting your money’s worth, at least not with the 40 euro menu (which is like $50 per person).  I’d be interested if the other menu was worth the splurge there.  I just feel like when I walk away from a restaurant in Paris, themed around French dining, I should walk away with more than “the salad was really good.”

Give it a try if you go for the experience, but just keep in mind you’re looking at more of a “steak with French fries” type of place rather than a gourmet food experience!

Would you want to visit Chez Remy’s?  What do you think of it?