When I took my trip to Disneyland and the D23 Expo this past summer, we booked almost no dining reservations.  For a Walt Disney World veteran who makes reservations 180 days in advance, this felt crazy!  We booked one lunch at Ariel’s Grotto but nothing else.  About a week before we left I panicked I decided on a whim to book a dinner reservation at Carnation Cafe.  I’m glad I ended up doing this, because the parks were very crowded that day and it was nice to have a sit down meal. 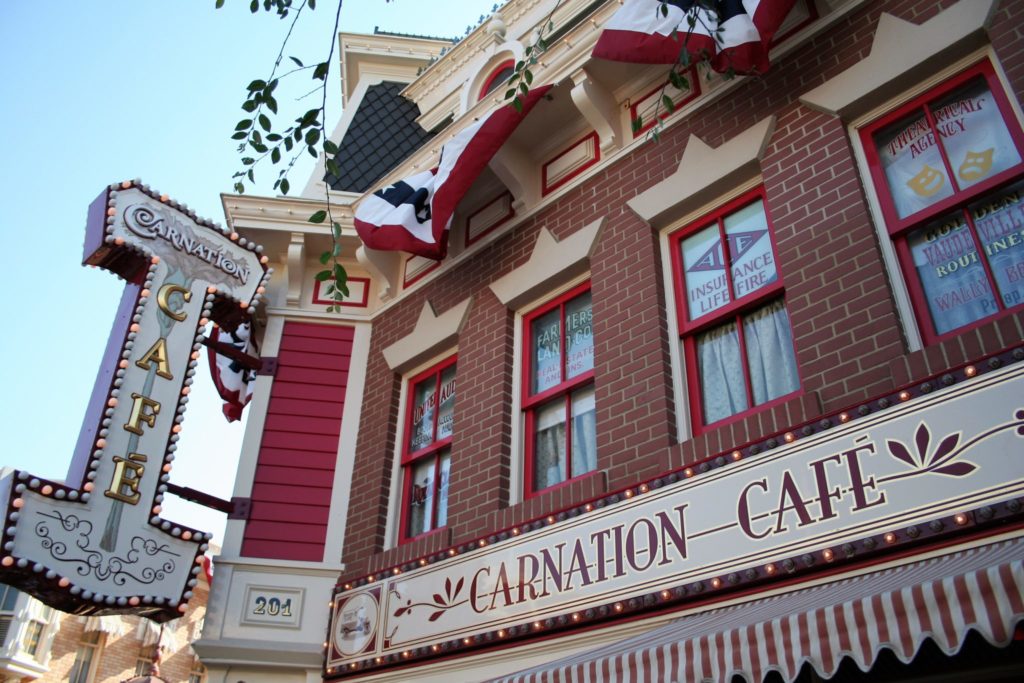 Carnation Cafe focuses on American favorites and homestyle foods, with an emphasis on Walt’s favorite meals.  This seemed like an appropriate choice since we were there on July 17th, the 61st anniversary of Disneyland!  We had also done the Walking in Walt’s Footsteps Tour that morning, so it was just a day full of Walt.

In honor of Walt, I started with Walt’s Chili (Hearty Chili topped with Cheese, Sour Cream, and fresh Tomatoes).  I also apologize because my photos here are not great.  I’ve since learned how to use my camera better in lower lighting, but some of these came out a little more blurry than I was expecting: 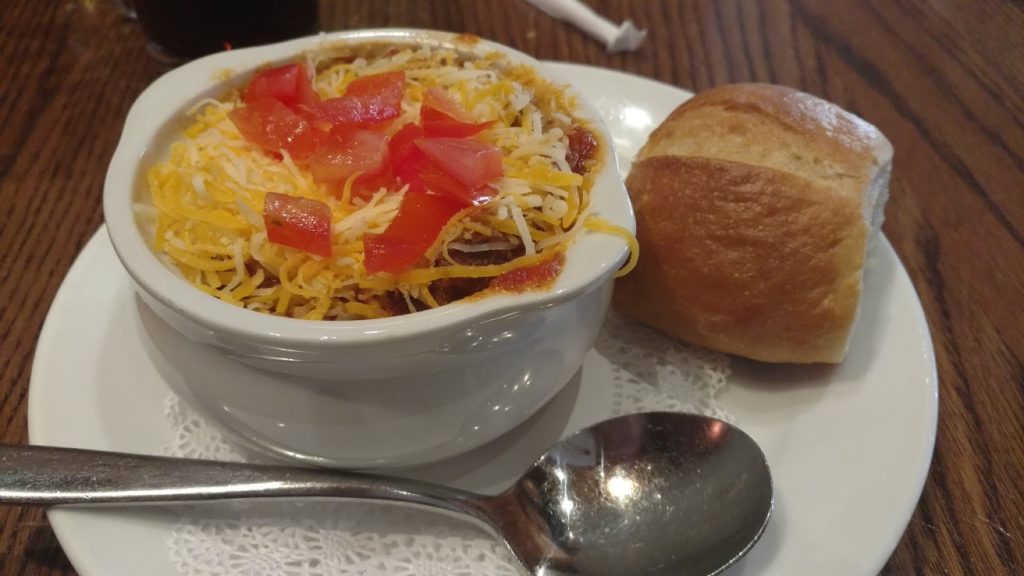 I asked for it without the sour cream, since I don’t like sour cream.  It was a nice, typical bowl of chili.  I remember reading in some Walt biographies about how chili was one of his favorite meals, but he needed the perfect balance of meat and tomatoes.  Hopefully they got it right here for him.  It was definitely tasty.

My traveling companion had the Baked Potato Soup for her appetizer (with Bacon, Cheddar, Monterey Jack, Sour Cream, and Chives): 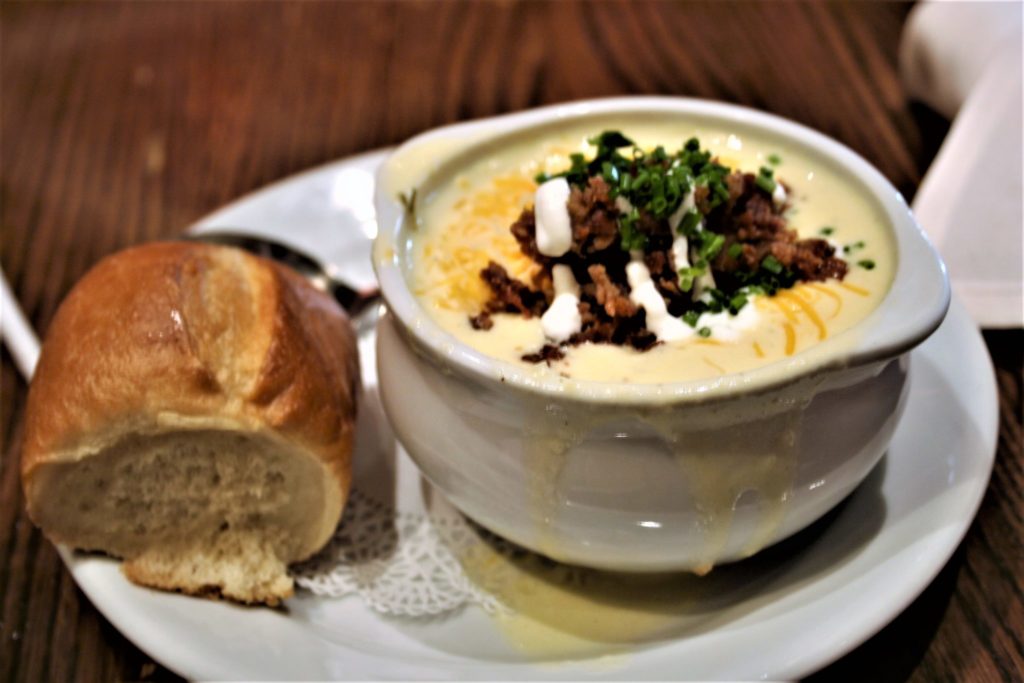 This looked like a delicious baked potato soup, and according to her it was.  Lots of delicious, gooey cheese, bacon bits, and warm potato.  Another great comfort food item. 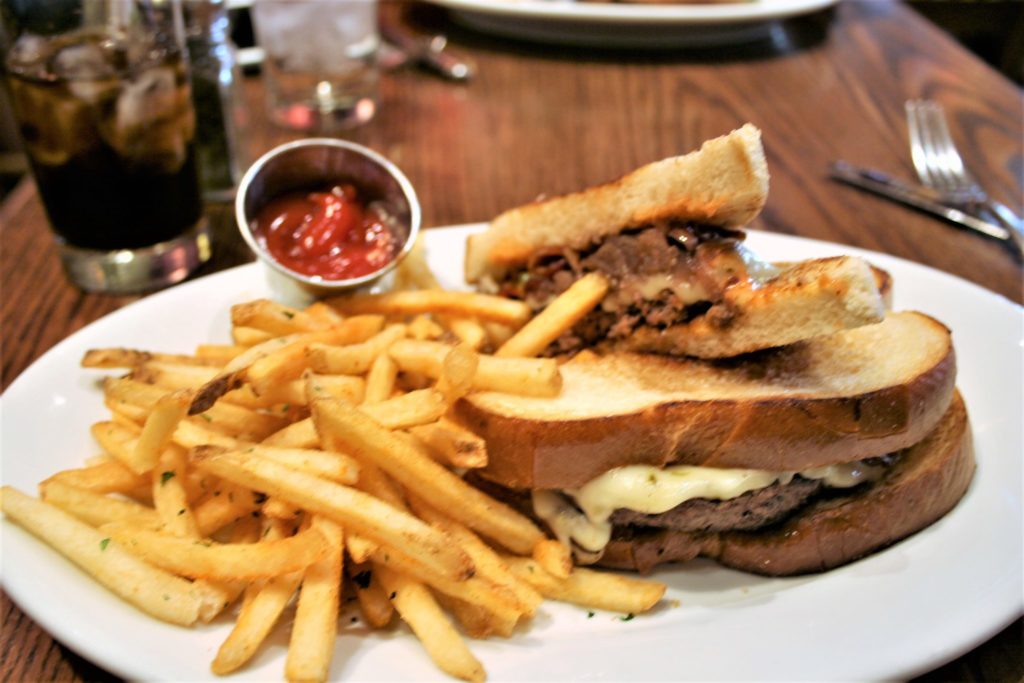 And of course since we’re doing comfort food I went with the fries.  I did end up pulling off the grilled onions from this sandwich because I’m not a huge onion lover and there were WAY too many of them.  Once that was done all of the flavors went really well together.  It was rich with some spiciness from the pepperjack cheese and the sauce.  I think they could serve it on a more interesting type of bread, but for a basic sandwich I enjoyed it. 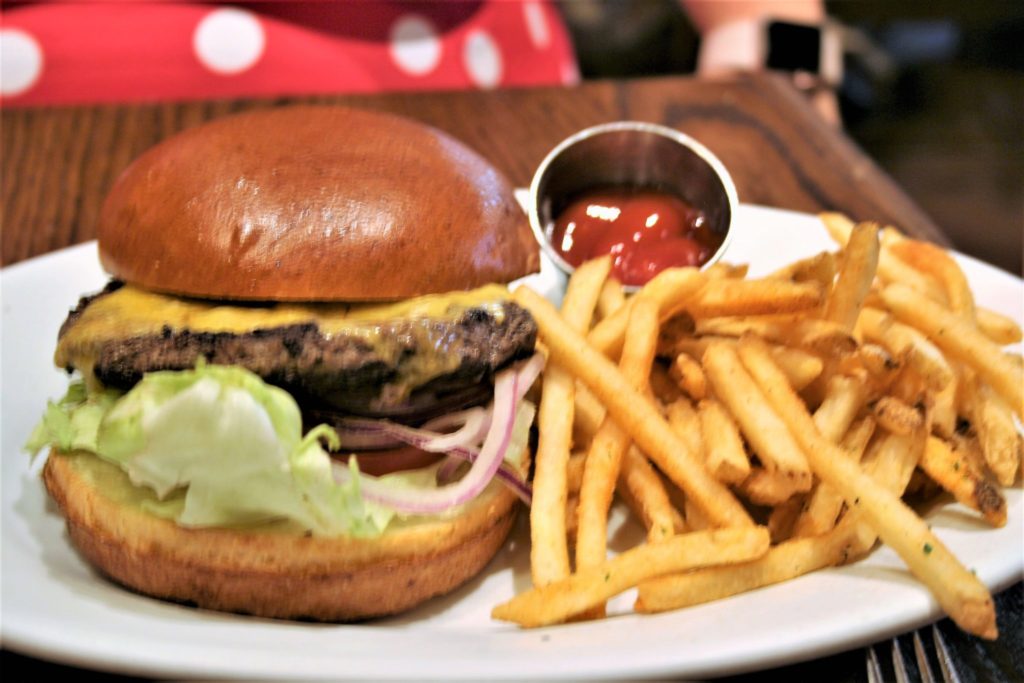 A very straightforward but delicious cheeseburger.  On some days this might be just the thing you want after walking around for hours in the parks.  It was also a pretty hefty burger too – just like I couldn’t finish all of my sandwich, my friend was not able to conquer the whole burger, either.

But that was okay, because by not eating all of our entrees we saved room for dessert!  I went with one of the classic malts (available in chocolate, vanilla, or cherry): 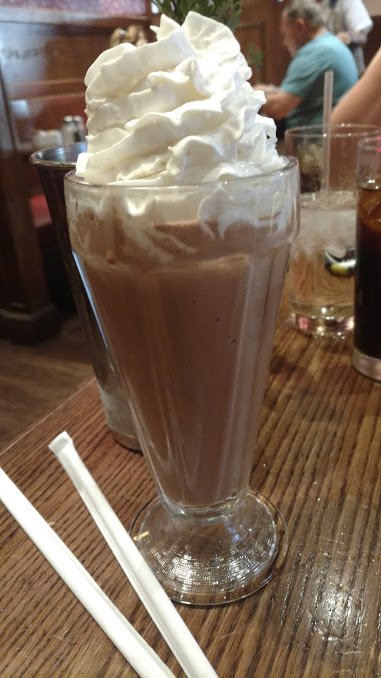 I went with chocolate, because of course.  I’d never had a “malt” before, but I did some research and it’s very similar to a milkshake but with malted milk powder.  The powder is supposed to give it a stronger, richer flavor.  It was very chocolatey and I liked it a lot.  They also gave you a ton of it.  I had this whole thing and they brought out the tin cup with the “extra” in it, which filled it right back up to the top.  I definitely did not eat all of that.
And my friend went with another classic, the Banana Hot Fudge Sundae (Chocolate or Vanilla Ice Cream, Bananas, Hot Fudge, Whipped Cream, Sprinkles, and a Cherry): 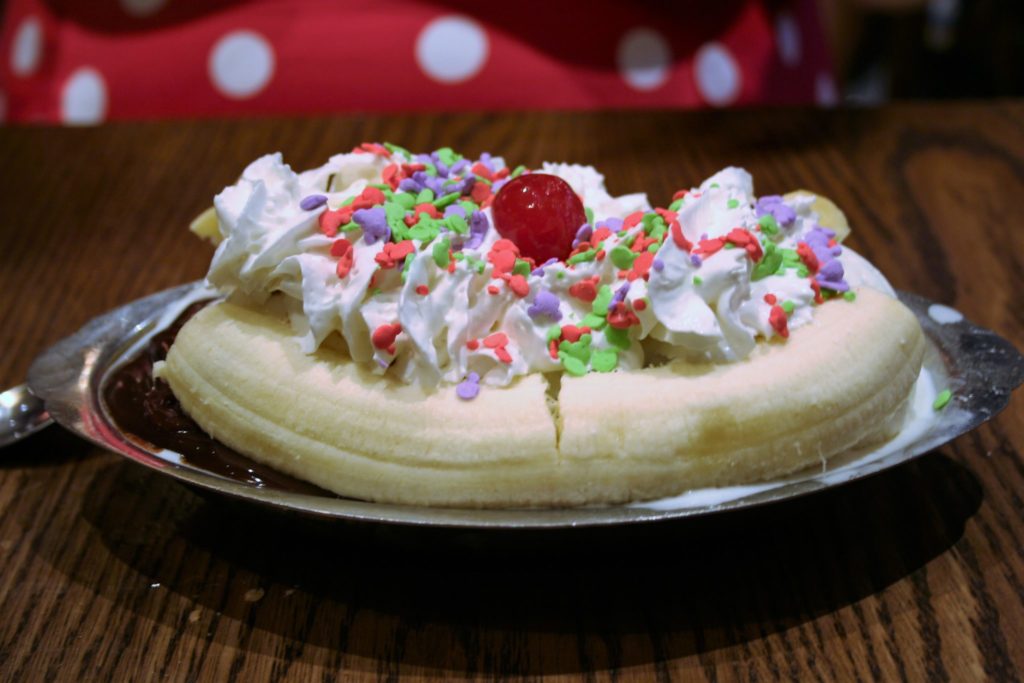 Looking at that, I’m sure you know that you can’t go wrong with a banana split.  Another huge, tasty, classic dessert. 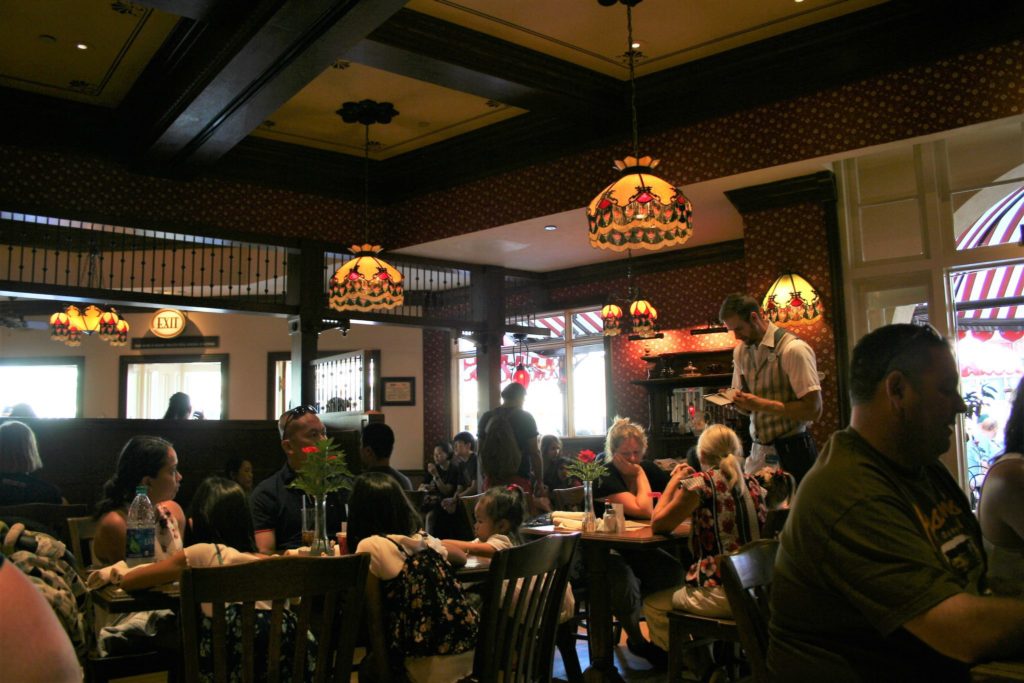 All in all we had a really nice meal at Carnation Cafe.  The inside seating is pretty small but there’s a lot of outdoor seating as well.  It’s cute and there’s a red carnation on each of the tables.  Well, except ours.  Our table was sad and flowerless, but luckily my friend grabbed a vase off of the waiter’s station when they weren’t looking so we could feel special too.  The prices were pretty reasonable for Disney, and given how hot and crowded it was that week I was happy with the decision to eat here!
Have you visited Carnation Cafe in Disneyland? What do you like about it there?