There might not be any alcohol in Disneyland park itself, but over across the way at California Adventure there are quite a few bars and and lounges which offer some great drinks and food items.  During my adventure of a trip in July, my friend and I found ourselves with an afternoon in California Adventure and some seriously long wait times for the rides, so we went with another option – bar hop around the theme park!

We spent the afternoon visiting a few different places to get drinks in California Adventure, and here are the highlights. 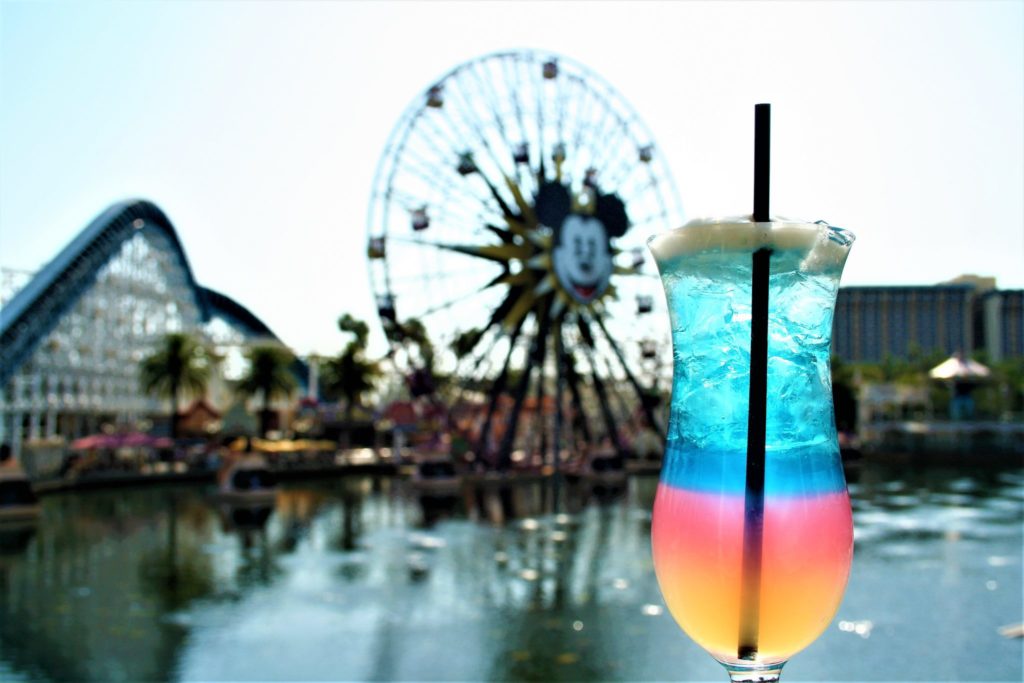 This was definitely one of the highlights of the trip, as the Cove Bar has great drinks and great food.  Sadly, it’s set to be totally redone soon, presumably with a new Pixar theme for the Pixar Pier that is replacing that area.  I’m hoping they keep the theme of fun drinks going.  The Cove Bar was known for having a “secret menu” of drinks, of which we tried more than we probably should have!  I enjoyed the Mickey Fun Wheel (pineapple juice, then X-Rated Passion Fruit Vodka and topped with blue curaçao mixed with vodka, rum and gin.).  My friend had the Zombie (Light rum, dark rum, coconut rum, spiced rum, 151 rum, orange juice, pineapple juice, blue curaçao, Midori, and grenadine) and the Neverland Tea (Vodka, gin, rum, peach schnapps, pineapple juice, Sprite, and Midori).

In addition to the drinks there were the incredible lobster nachos.  They’d better bring these back no matter how they retheme the place, because they were one of the tastiest items I’ve had.  And I’m a huge fan of both lobster and nachos.  Since my friend is not a seafood lover, I got to enjoy them all for myself 😉 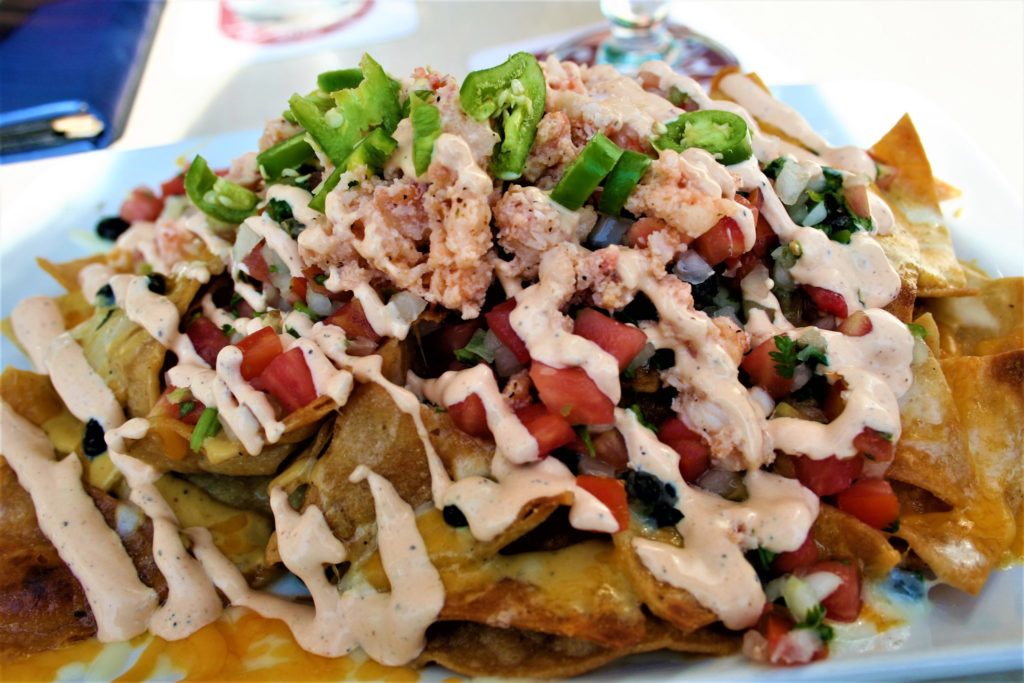 This is a bit of a pricier option for a theme park, as they have a lot of higher end wines, but we decided in the spirit of vacation to “treat ourselves.” It’s a fun location – an outside terrace located up a flight of stairs, so you have a nice view of the park but can enjoy your wine in a quiet, more secluded spot.

We both ordered wines from the Disney Family of Wines collection – because when in Disney you’d better have some Disney wines!  I went with a glass of the Lasseter Family Winery Enjoué Rosé, which was a very pleasant blush wine.

My friend decided to do a sampler and ordered the Red, White, and Rose (Kurt Russell’s GoGi Goldie Chardonnay; Lasseter Family Winery Enjoué Rosé; Frank Family Vineyards Cabernet Sauvignon).  She was generous enough to offer me a sip of the two I didn’t have myself.  I was actually very impressed with the Chardonnay.  It tasted delicious and Chardonnay is typically one of my least favorite kinds of wine.  It tasted rich and full-bodied, and not overly dry.

Just one page of the many pages of drinks at Carthay Circle.

I absolutely love the atmosphere of the Carthay Circle Lounge, and the drink options that they have to offer there are super fun and go along well with the theme.  There is an extensive menu, many items which are only available at this location.

Carthay Circle features lots of classic cocktails to go with the 1920’s/1930’s themeing.  Since it was such a hot day the Pimm’s Punch (Pimm’s No.1 Liqueur, Plymouth Gin, Strawberry, and Lemonade served over Crushed Ice) sounded very refreshing, and it was.

We headed over to Sonoma Terrace to try the beers that California Adventure had to offer.  Disney describes it by saying “discover a diverse selection of beer from California craft breweries!”  So I was a bit disappointed to find that they only had a handful of beers on tap and the rest were bottled.  Maybe I’m spoiled by our craft breweries here in Pennsylvania, but I’m pretty much always going to go with a draft beer.

Unfortunately I did not get a draft beer – I don’t quite remember why, but I think they were all IPAs or other beers that I don’t particularly care for.  Since we were in Anaheim I went with the Anaheim Hefeweizen in a bottle.  It was pretty good, basically a typical hefe.  I probably would have rated it higher on draft.  Yes, I’m a beer snob.

As part of the Summer of Heroes in California Adventure over the summer, the bar area back by the Monsters Inc. ride was transformed into a Marvel themed bar called Cosmic Canteen.  We got some super hero themed drinks.  As well as Groot sippers, though those had soda in them instead of alcohol – but they were much too cute to resist!  Not to mention GROOT BREAD to go along with your drinks. I think they should just make this a permanent thing.  And maybe they will, with a new Avengers themed area going into that park.

I actually had a beer.  I think it had been renamed with some catchy Marvel name, but it was the Orange Creamsic Ale from Railway City Brewing.  This was pretty excellent.  It was a bit different but tasty and refreshing. 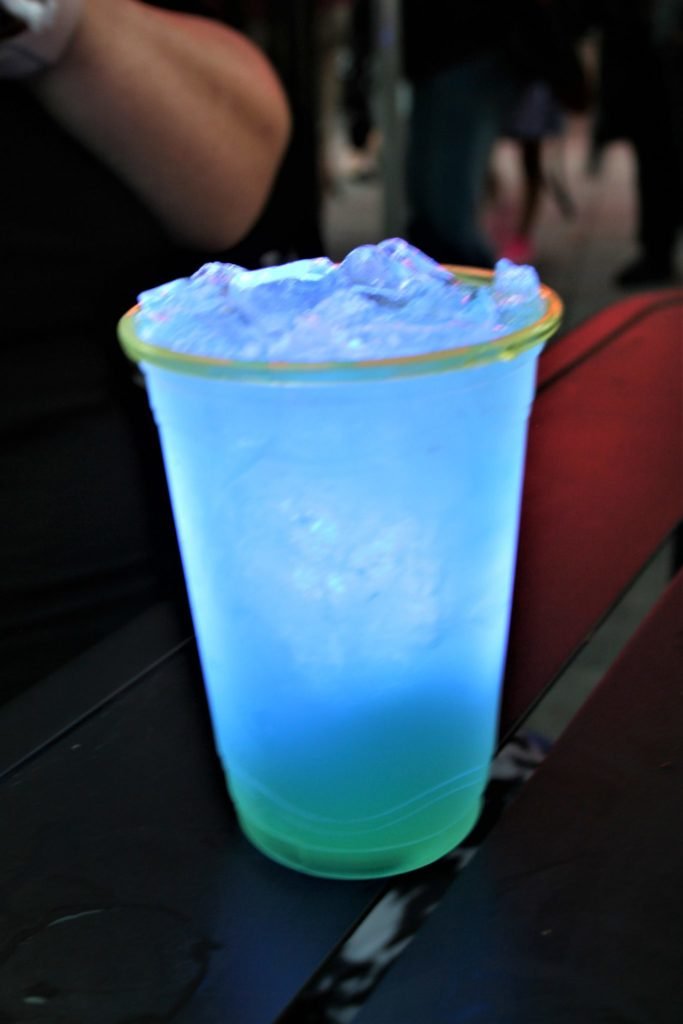 My friend had a cocktail – the Be Brave, Be Blue (UV Blue Raspberry Bombsicle and lemonade).  It was really good too.  One of those drinks that goes down way too easily and is nice and sweet but can still pack a punch.

There are two more bar/lounge locations where you can get drinks in California Adventure (as opposed to just random stands around), but we skipped them.  Bayside Brews has 6 different beers on tap.  Mendocino Terrace is another wine-based location, and since we had done the Alfresco we skipped it.

Next time I go back to California Adventure I will definitely go back to many of these places.  Cove Bar (or whatever it becomes) definitely tops the list, especially if the lobster nachos make a return.  Carthay Circle Lounge was wonderful too.  I’ll be looking forward to seeing what else they do with some of the new stuff they’re adding!