You are here: Home / Food and Drink / Busch Gardens Food and Wine Festival 2017 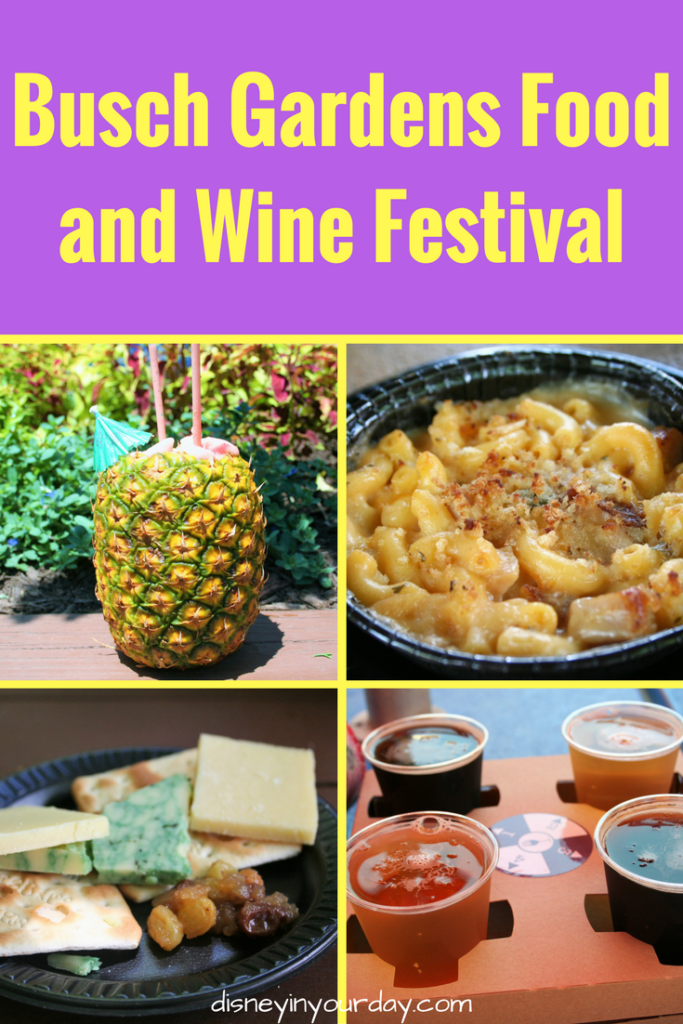 Food, drinks, theme parks, and roller coasters.  There’s no denying that I love all of these things, which is why the Busch Gardens Food and Wine Festival in Williamsburg was a pretty awesome experience.  It’s similar to the Food and Wine Festival in Epcot, so if you enjoy that and are near the Virginia area you’re probably going to want to check this one out!  We visited over Memorial Day weekend and were able to try a lot of the different offerings, which I’ll detail below.

We spent two days at Busch Gardens and Jason and I shared things, so we got to try a number of dishes.  We were there the first day of the festival, so they still seemed to be working out a few kinks.  For example, some things rang up as a different price than what was on the menu (being $3.50 instead of $3.25), and they seemed to be having trouble with the prepaid cards that they were selling as well.  Hopefully some of those things got worked out! 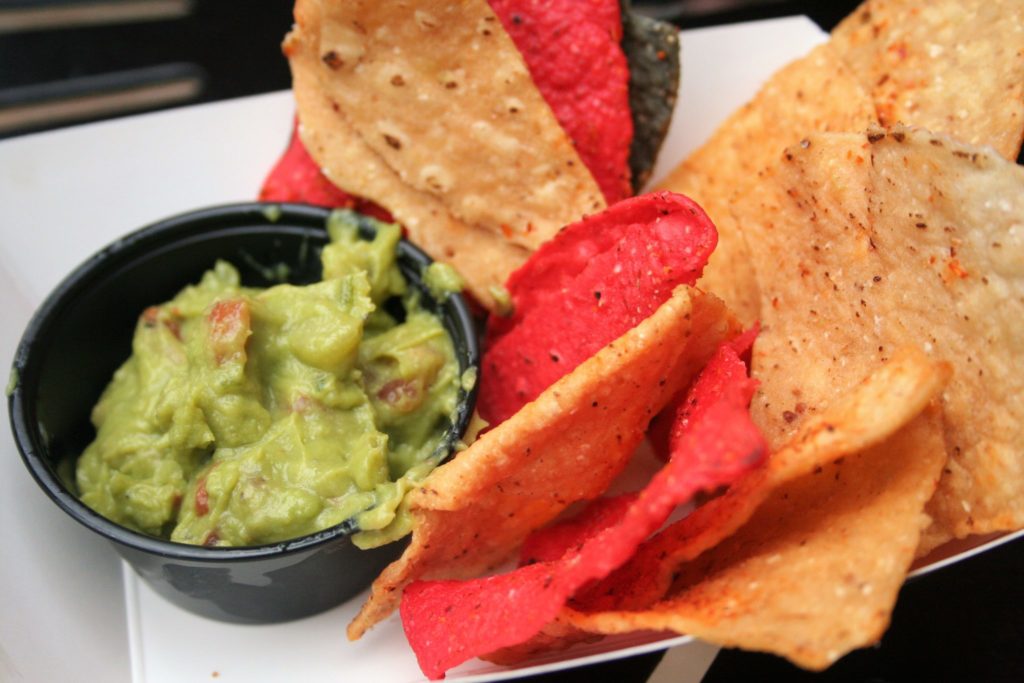 Ghost pepper guacamole (Spicy hot guacamole with Tajin ® seasoned tri-color tortilla chips) – they made this sound like it was going to be super spicy (it had ghost pepper in the name, after all), but it really wasn’t bad.  We were hoping for more spice.  I got one bite that had a real kick, but the rest was pretty mild.  I did like the tajin chips though, they were very tasty. 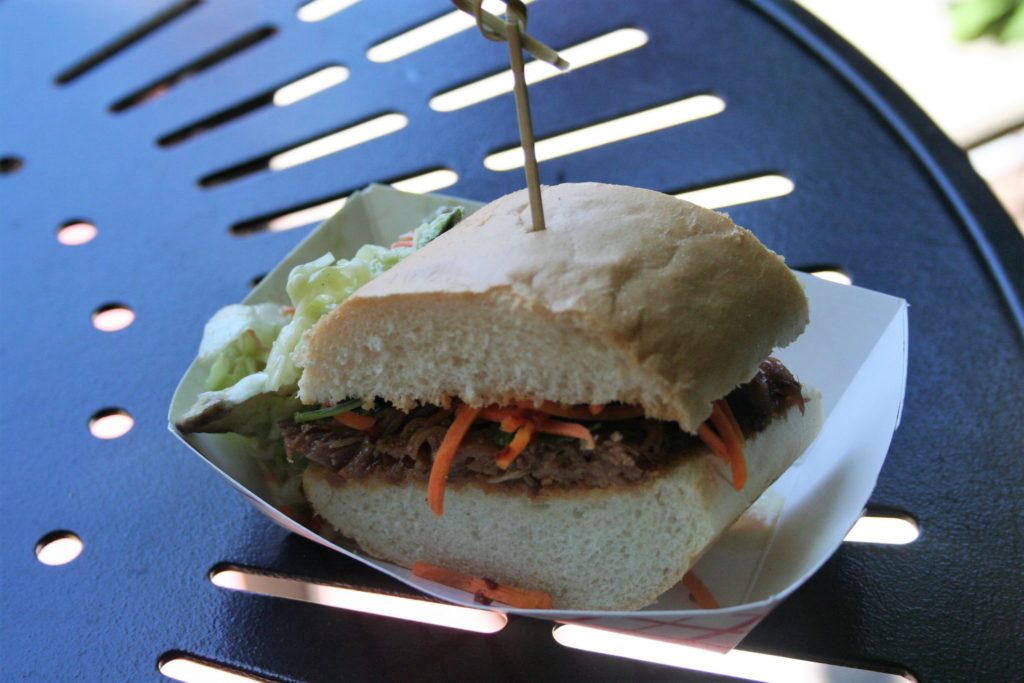 Banh Mi (Vietnamese-style sandwich of marinated pork & pickled vegetables on crispy bread with lime and nuoc mam slaw) – these sandwich was really tasty!  There were a lot of great flavors going on here.  The slaw, on the other hand, was really lacking in flavor and we left most of it on the plate. 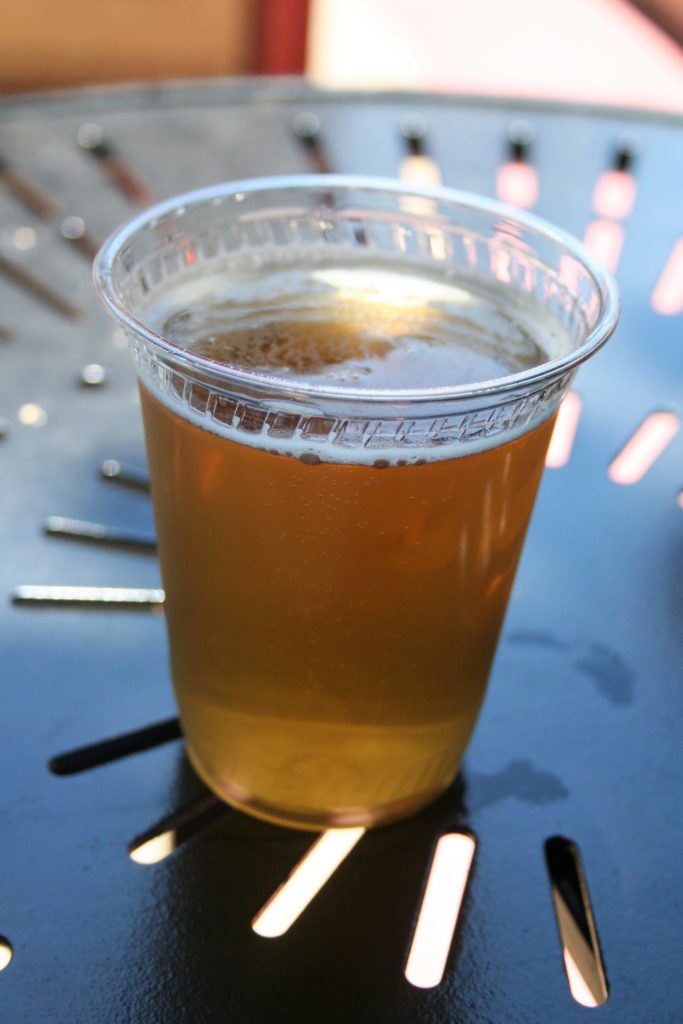 Tiger beer – I don’t have a lot to comment on about this beer.  It seemed pretty average to me – not a bad choice if you’re looking for a standard lager, but if you’re into beer there are going to be much better choices at the festival. 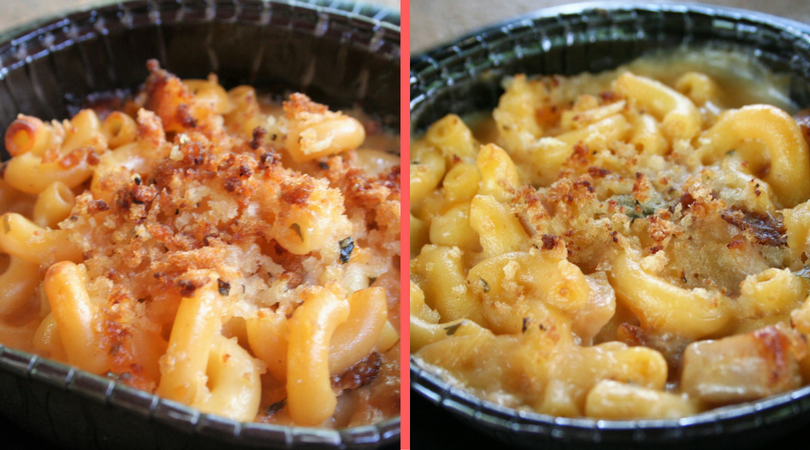 Mac and cheese (Creamy mac & cheese with cornmeal-crusted Canadian bacon) – if you know me well, chances are you know I love me some mac and cheese.  So I was excited to try this one.  The first time I ordered it though, it was pretty bad.  It had clearly been sitting out for quite awhile and the cheese had hardened/congealed a bit.  It was quite disappointing.  However, the next day I saw someone else order it and it looked a lot better, so I gave it another try.  It was definitely much improved from the day before and I enjoyed it, but it was certainly not the best mac and cheese I’ve ever had. 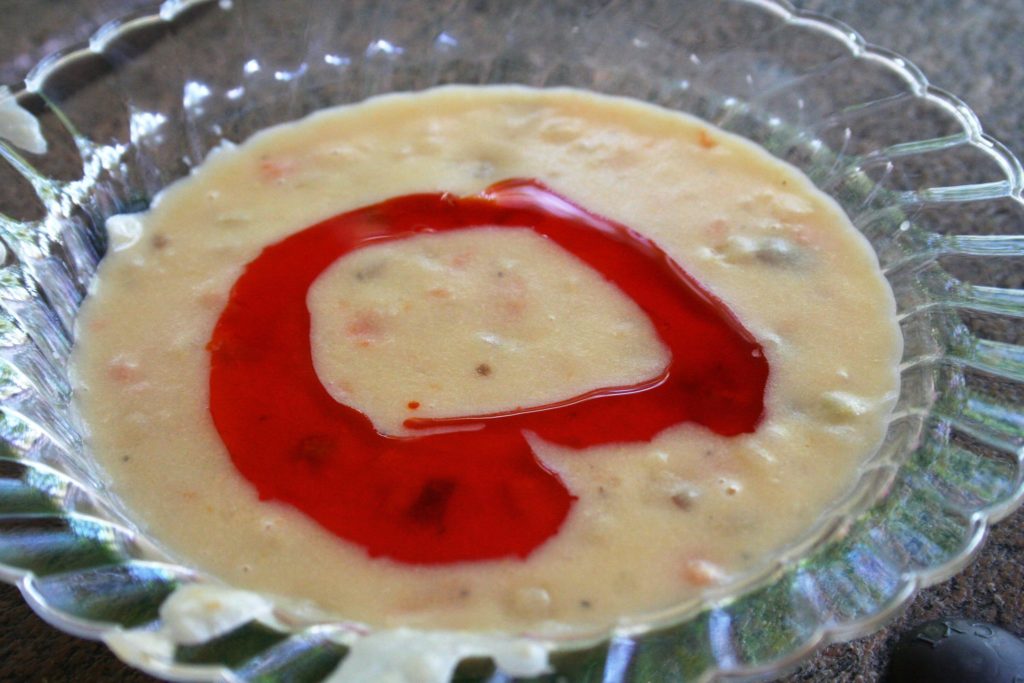 Cheddar and lager chowder (Sharp cheddar & Canadian lager chowder with smoked paprika oil) – I very much enjoyed this, even more than I thought I would.  It’s not surprising that the combination of beer and cheese is delicious, but the addition of that paprika oil just stepped things up a notch.  A great bunch of flavors together. 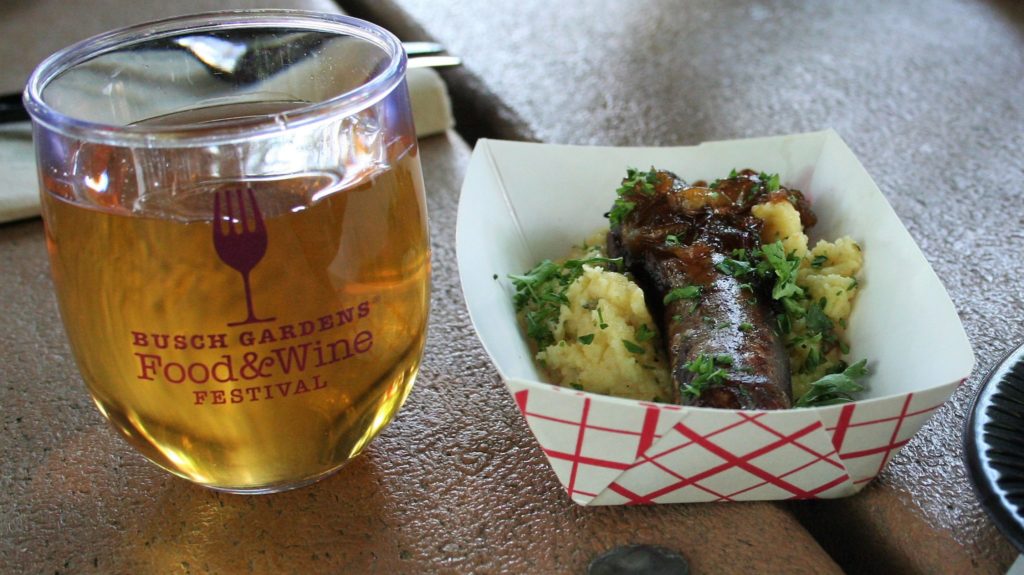 Venison sausage and corn porridge (Wood-fired venison sausage & creamy polenta with apple cider & caramelized onions) – I didn’t try this one, but Jason ordered it.  He said it was good and “pretty much exactly what you’d expect.”

Jackson-Triggs Ice Wine – this ice wine was good, but they certainly gave us a lot of it!  Not that I’m complaining.  It’s just that ice wine is a dessert wine so it’s usually a much smaller portion, and this was a full sized wine glass.  Excellent!

Larry’s Lemonade – this was a hard lemonade available.  Jason got this one and I took a sip but found it to be too sweet for me.  He enjoyed it though! 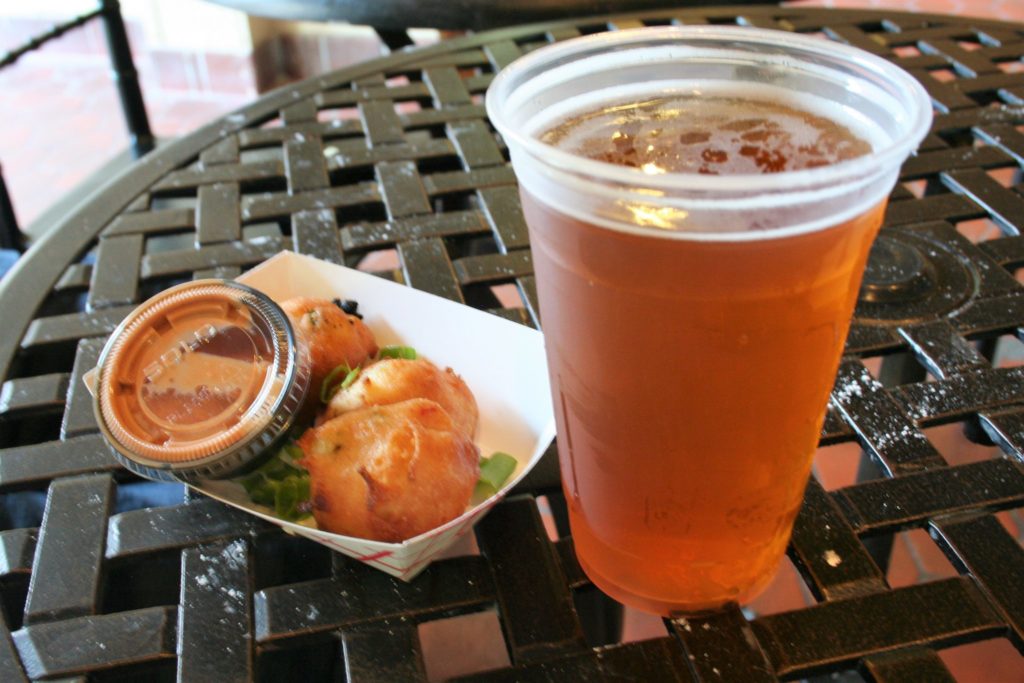 Gamba Fritters (Caribbean fried shrimp dumpling with Pickapeppa dip) – These were fried perfectly and were quite good.  The dip went really well with them and added a lot.

Harpoon Summer Ale – This was a decently light summer beer.  I enjoyed it, but wouldn’t say it was one of my favorites. 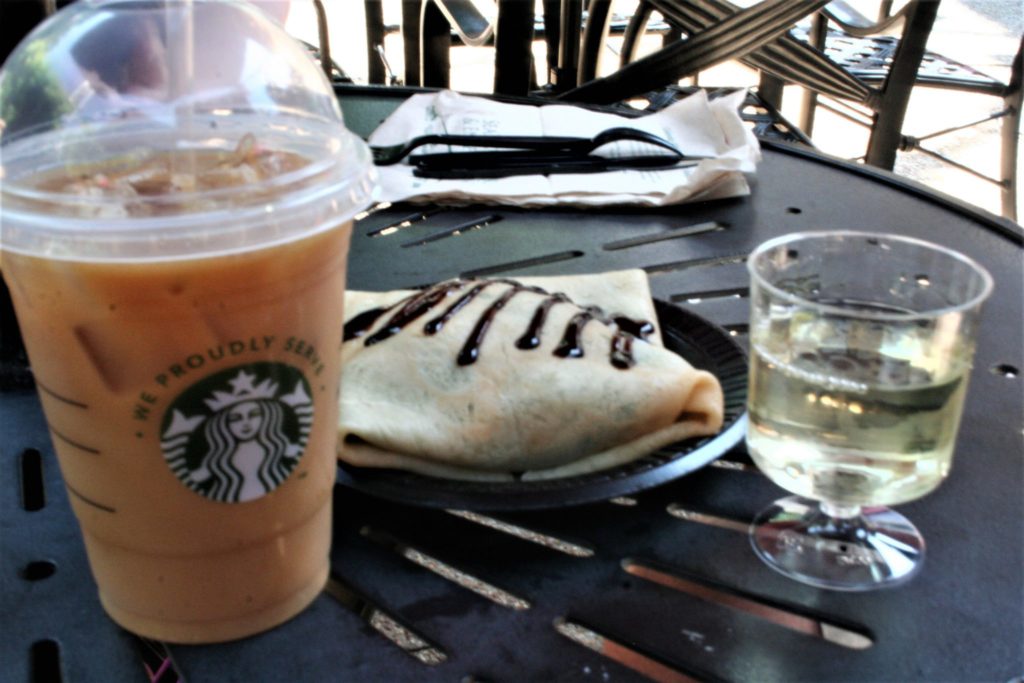 Casteggio Moscato – It may have been 11:00 and “breakfast” when we got our crepe and coffee, but why not have a little moscato with your breakfast?  This is one of the sweetest wines out there and the one they have here is very good. 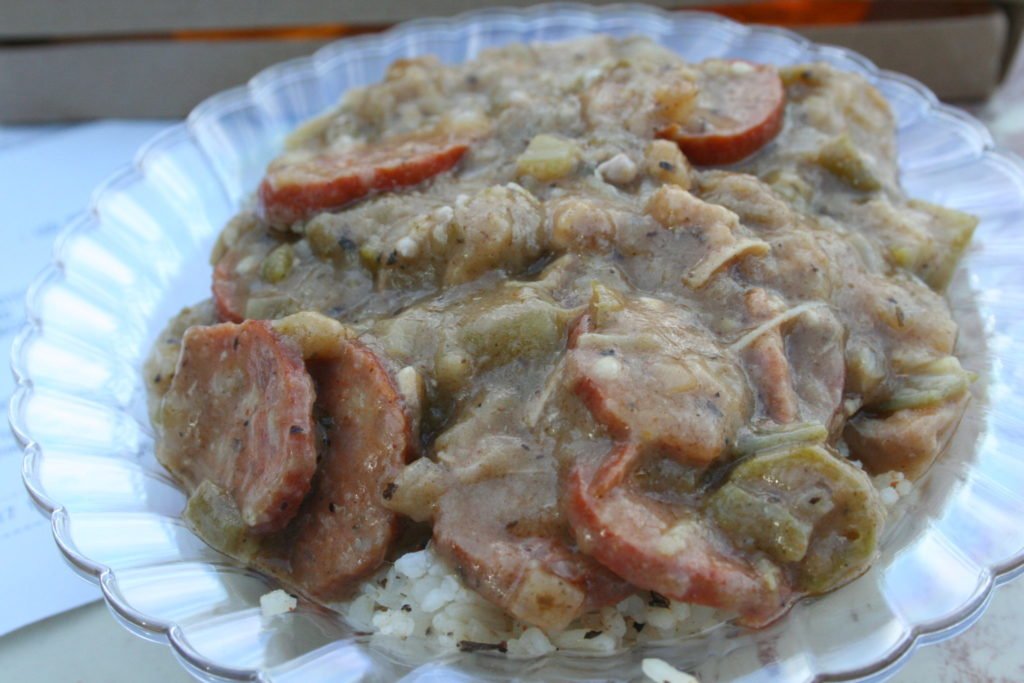 Chicken and andouille gumbo (Creole-spiced stew with shredded chicken & spicy sausage over rice) – when we visited the Busch Gardens Food and Wine festival for the first time back in 2015, the French Quarter was our favorite booth.  And once again this year it did not disappoint.  The gumbo is delicious and huge portion for the price, which means it’s great for sharing. 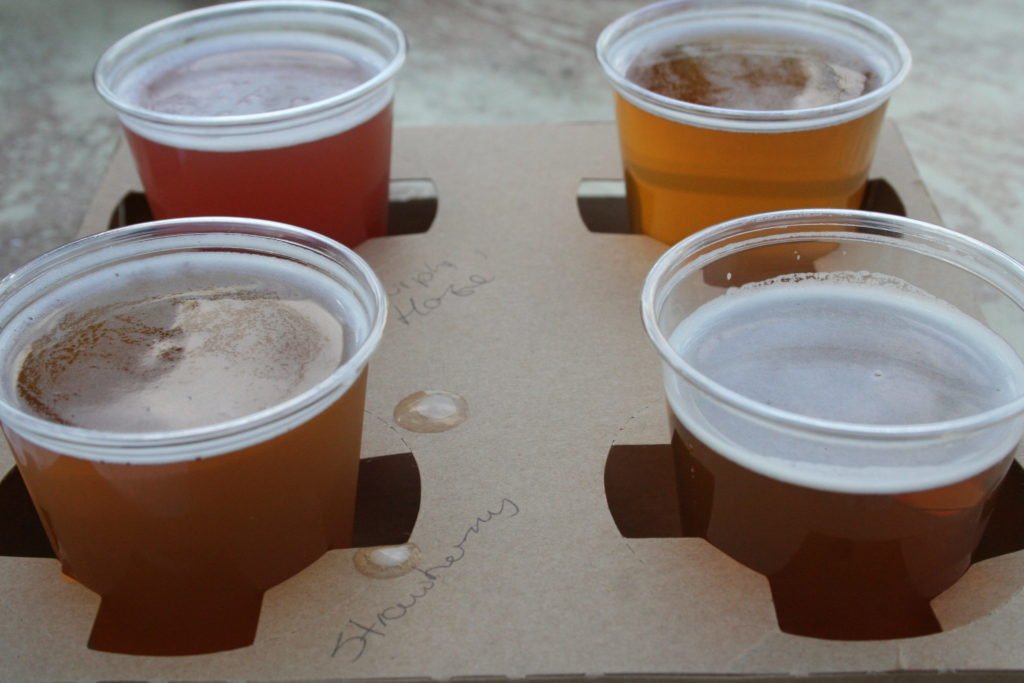 Beer sampler – if you like sweet, fruity beers like I do, you’ll want to get the sampler here because they’re all delicious.  There was the Abita Strawberry Harvest Lager, Abita Purple Haze which is a raspberry flavored beer, Sweetwater Blue, and New Belgium Juicy Watermelon Lime ale.  The watermelon lime was just a little too much lime for me, but I loved all of the others.  The Sweetwater Blue was my favorite, because I love a tasty blueberry beer. 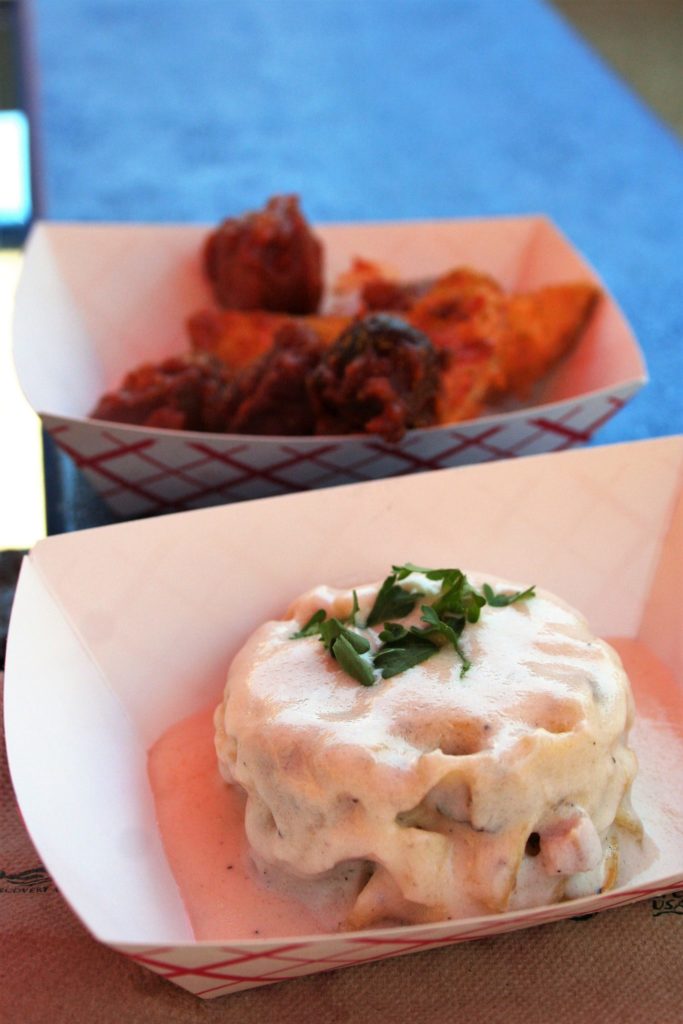 Schinkennudel (German-style noodle, baked with cured ham & cheese) – this was warm, creamy, and delicious – while it doesn’t feel like a typical mac and cheese, the quality here was much better than the one over in Canada.

Currywurst (Knockwurst with curry-spiced tomato ketchup & roasted potatoes) – this was an enjoyable dish.  I had currywurst when I was in Munich so of course it didn’t quite live up to that, but it was good!

Beer sampler – Germany is known for beer, so we decided to try a little of each!  They included the Hofbrau Munchen, Bitburger, Köstritzer, and Spaten Optimator. 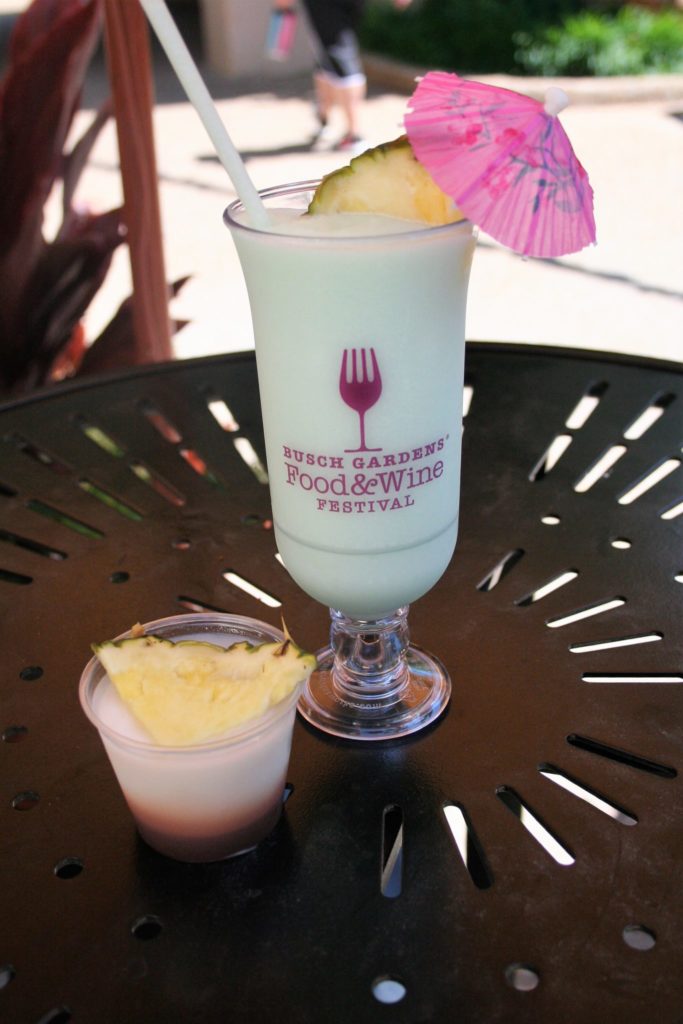 Haupia (Sweet coconut mousse with Kona coffee ganache) – this was a little disappointing because it looked nothing like the picture they had by the food stand.  In the photo it looked like a tart, served in a pastry shell.  This was just a mousse in cup.  And while it was good, it felt a little one note to me and I think the pastry would have provided some interesting texture differences.

Blue Hawaiian – there’s nothing like a sweet tropical drink on a hot day, and the blue hawaiian was perfect for that.  It’s one of those sweet drinks that goes down a little too easily, and I’m sure we could have had a couple more of them if we didn’t have so many other things to try. 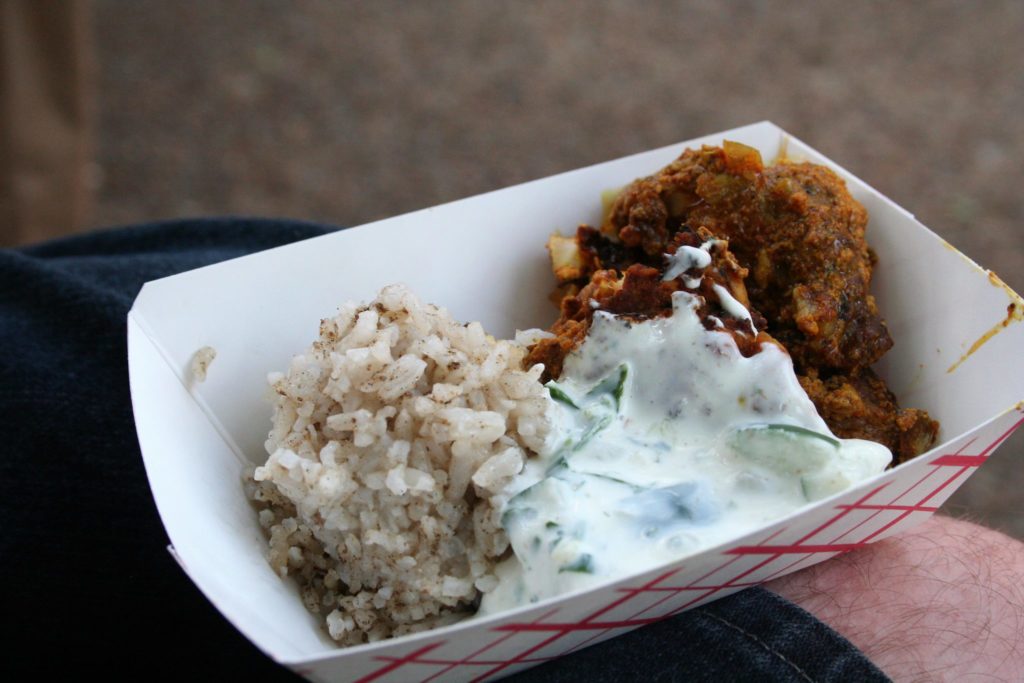 Tandoori chicken (Spiced yogurt marinated chicken with cardamom ginger rice & cucumber raita) – I’ll be honest this was the last booth we visited and I was so full by this point that I couldn’t even eat a bite so Jason got this all to himself.  He said it was very good and more filling than he expected.  They were pretty generous with the portion size here.

Spicy Potato Curry (Garbanzo beans, sweet peas & potatoes stewed in coconut milk with curry spice) – we actually tried a sample of this from the a demonstration booth and I was super impressed.  It had lots of great curry flavors and seemed like a fantastic vegetarian option.  If I wasn’t so full when we got to the India booth I probably would have ordered a whole portion of this to have some more of it. 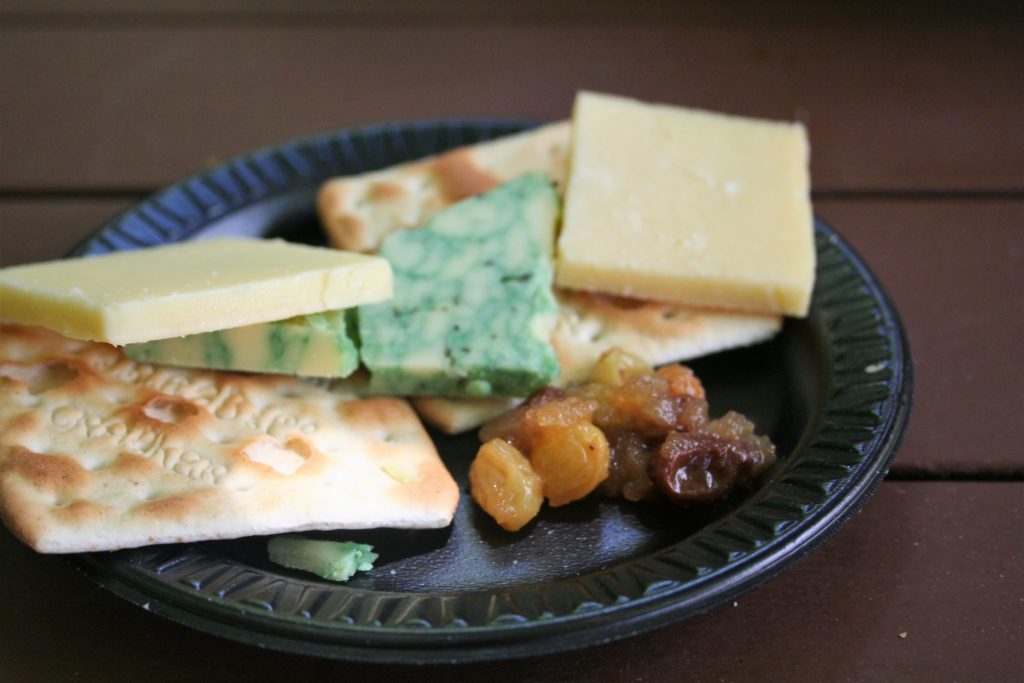 Irish cheese sampling (Sage Derby, Blarney Castle cheese & Dubliner cheese served with apple-raisin chutney & cream crackers) – this was another big hit for us.  The sage was definitely my favorite, the combination of herbs and cheese was delicious.  All three of the cheese were excellent though.

Guinness Mousse (Dark chocolate & Guinness mousse with whiskey-infused whipped cream) – this was amazing!  I’m not sure how I don’t have a picture of it.  Not only did it taste good, but it was adorable.  It really looked like a little Guinness beer, but made out of chocolate and whipped cream instead. 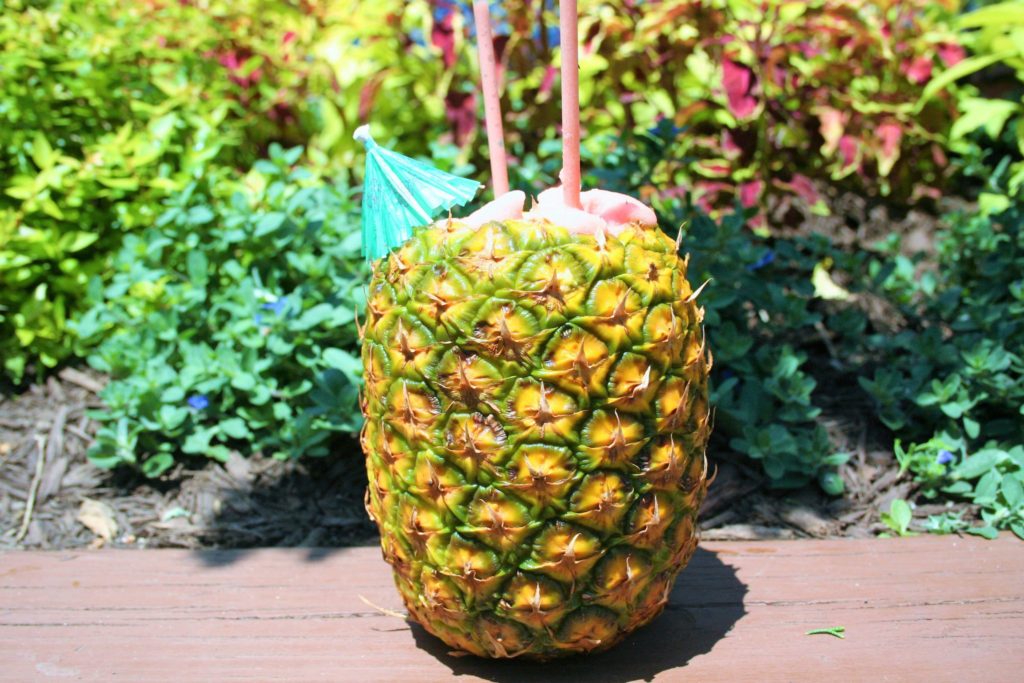 Rum Runner – This booth has a ton of different frozen drinks, and you can get them in a regular cup, a pineapple, or a coconut.  The rum runner was excellent and I’m pretty sure it tasted even better because it was in a pineapple. 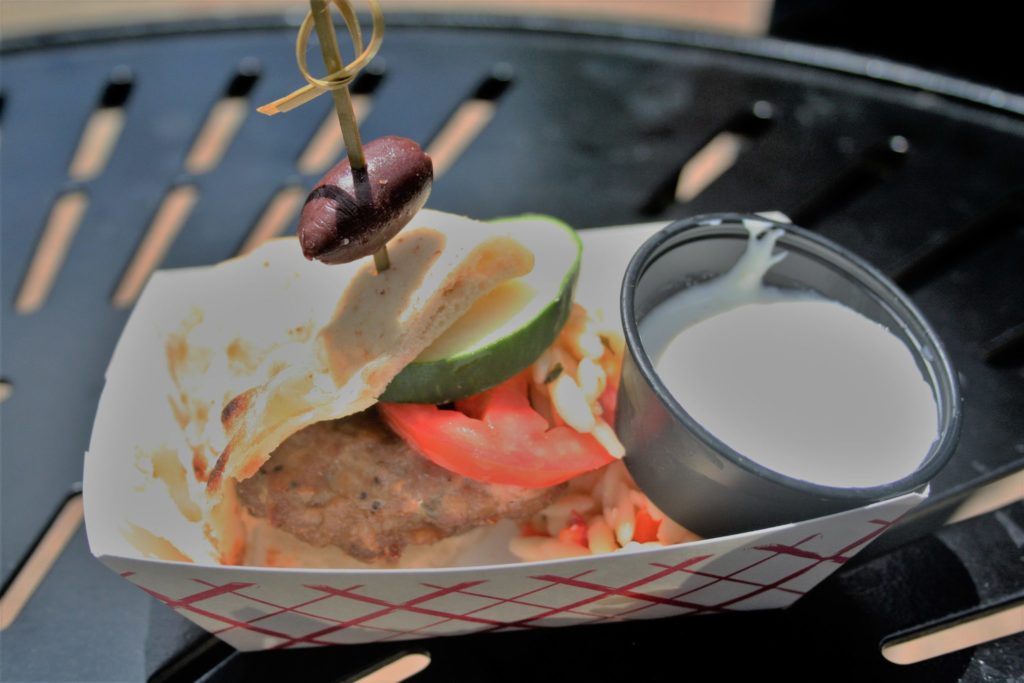 Lamb Slider (Seasoned ground lamb on pita bread with feta cheese spread, cucumber, tomato & olive) – this was definitely towards the top of my list for favorite things I had at the festival.  The lamb slider was absolutely delicious, packed with spices. 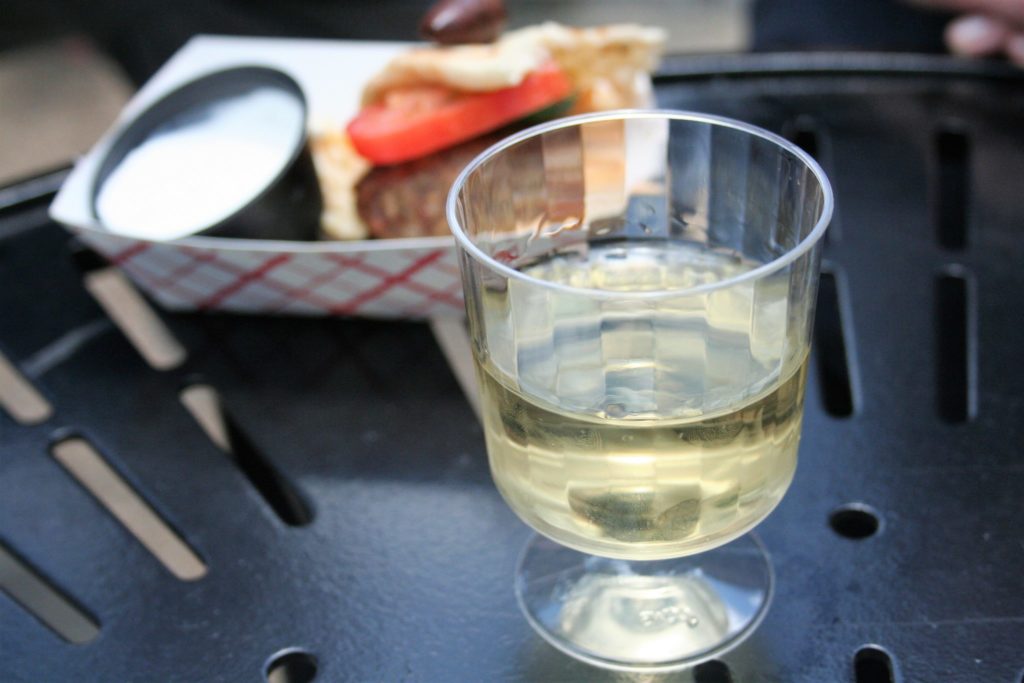 Elios Mediterranean White Wine – another item that just felt average.  Nothing really stood out about it for me, but probably a reliable choice if you like white wine. 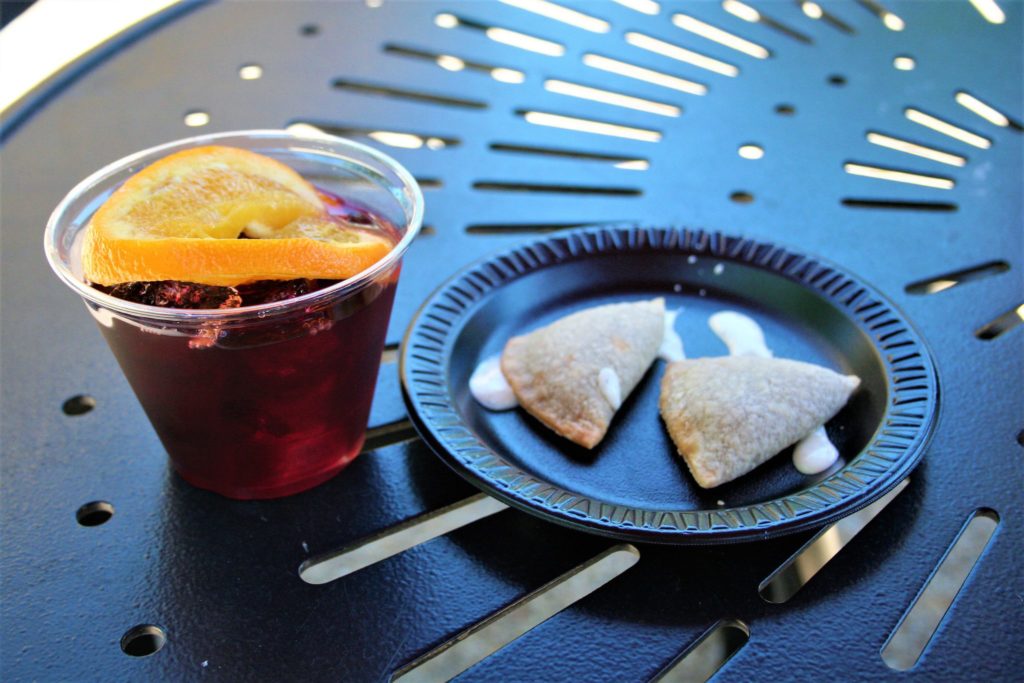 Chorizo Empanada (Spicy pork sausage pastry pocket with cilantro lime cream) – these were definitely tasty little empanadas, but I feel like they were a bit too small for the price ($4.25).  Not bad, but not something I would get again.

Red Sangria – I love a good red sangria, and on a warm day at the theme park this hit the spot.  My only complaint was that it had way too much ice in it and hardly any drink! 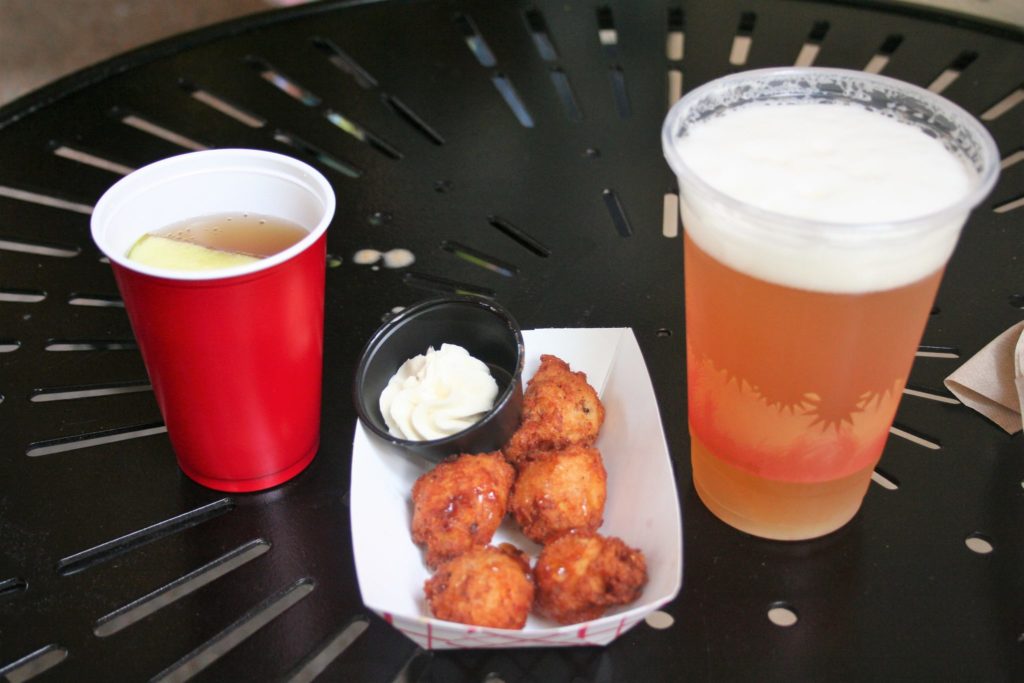 Bacon and Cheddar Hushpuppies (Cornmeal fritters served with honey butter) – these were another thing that goes towards the very top of my list, and I would absolutely recommend.  The ones we got were warm, crisp, and had the perfect touch of sweetness with the honey butter. 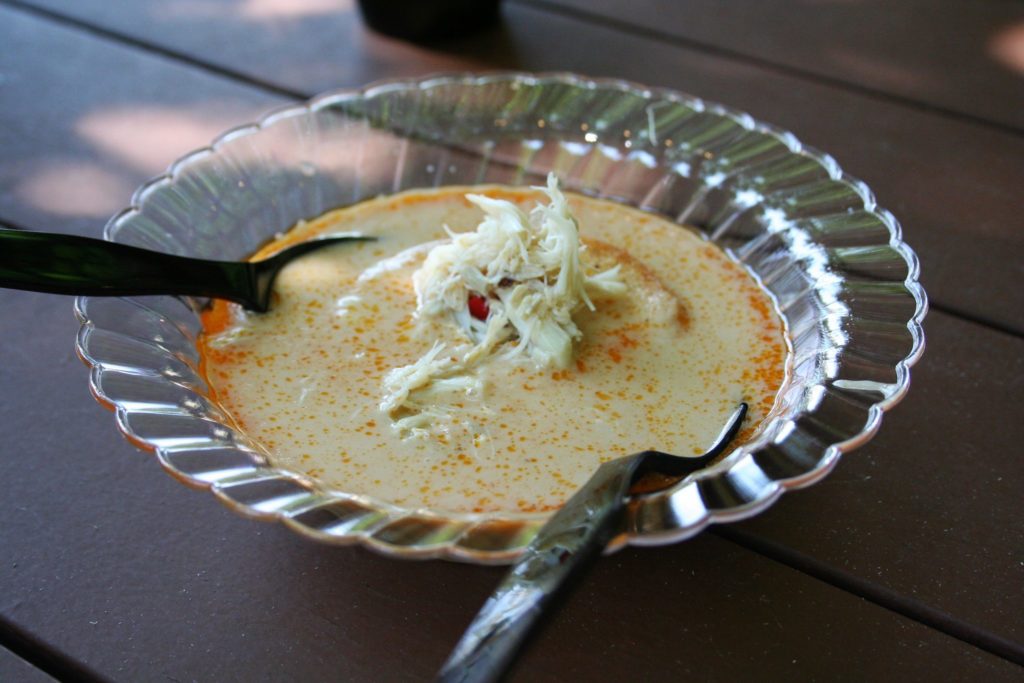 She-crab soup (Crab bisque finished with sherry, Old Bay ® crostini & Chesapeake blue crab salad) – It felt a little warm to be having soup, but this one was quite tasty.  The broth itself was quite delicious, and there was plenty of actual crab on top.

Virginia Beer Company Saving Daylight Citrus Wheat Ale – I enjoyed this one.  The citrus flavor was more subtle, and it had more hops than I was expecting for a wheat ale.

Apple pie moonshine – Don’t be fooled by the word moonshine – this drink was definitely more apple pie.  It wasn’t overly strong, but legitimately had the spices to make it taste like you were drinking an apple pie.

The Busch Gardens Williamsburg Food and Wine Festival still goes on Fridays, Saturdays, and Sundays until July 2nd, so go check it out if you can!