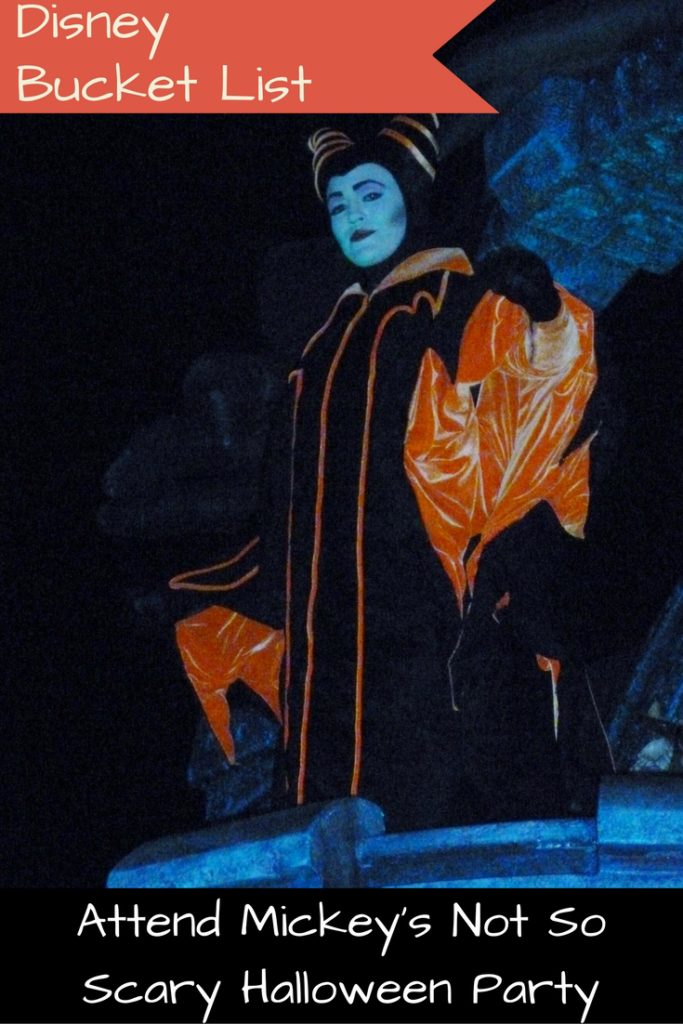 This year was exciting because it was my very first time attending Mickey’s Not So Scary Halloween Party!  If you haven’t been, there are a number of things to look forward to!

For me, one of the most exciting things about attending the Halloween Party is being able to wear a costume into Magic Kingdom park!  While kids can always dress up like princesses or pirates or whatever they like, adults are not normally allowed to wear costumes.  For this party though, that’s all different.  I got to dress up like a princess (Belle) and prance around Magic Kingdom.  It doesn’t get much better than that!

The party starts at 7, at which time any guests without a party ticket must leave.  It goes until midnight, which means that the lines for most attractions are shorter than they would be during the day.  Many of the most popular attractions are open, including Piartes of the Caribbean, Splash Mountain, Big Thunder Mountain, Peter Pan’s Flight, Enchanted Tales with Belle, Seven Dwarfs Mine Train, Space Mountain, Haunted Mansion, and more.  While I was there I only did one ride – Under the Sea – because there were so many other things we wanted to do!

One of the highlights for me, especially while dressed up in costume, was getting to meet characters – especially some that aren’t out very often.  We met the hag from Snow White, Minnie in her Halloween costume, and Gaston.  There was also a number of others, including Jack Skellington and Sally, Captain Jack Sparrow, the 7 Dwarfs, and others.

At the Halloween party you can go “Trick or Treating”.  There are a number of stations around the park that are handing out candy which you can collect.  You’ll get a map when you arrive which will tell you where you’ll find the candy.  In addition to the candy, you can find special Halloween treats at some locations.  You’ll find candy corn soft serve ice cream, candy corn cotton candy, a spiced pumpkin waffle sundae, and a ghost cupcake.  I tried the ghost cupcake and while it was cute, I wasn’t super impressed with the taste.

This is another highlight of the party.  Mickey’s Boo to You Parade performs twice a night, and we caught the second viewing.  It was different and fun.  But my favorite was Hallowishes.  It’s a fun, Halloween themed fireworks show, featuring a lot of music from the Haunted Mansion and the Nightmare Before Christmas.  It was very impressive!  Some other entertainment going on that we didn’t get the chance to attend included Club Villain, Villains Mix and Mingle, and Monstrous Scream-o-ween Ball.

Finally, there’s special merchandise you can get that’s exclusive to the Halloween Party.  This year they included a t-shirt, pin, and special magic band.  While I didn’t purchase any of these items, we did get another fun opportunity – the Haunted Mansion shop, Memento Mori, was in soft opening so we got to go explore in there, which was fun!

Overall the Halloween Party was a great time, but I wish I could’ve experienced even more of it.  I can’t wait to go back someday!

Check out the other items on my Disney Bucket List here:

Have you been to Mickey’s Not So Scary Halloween Party?  What’s your favorite thing there?