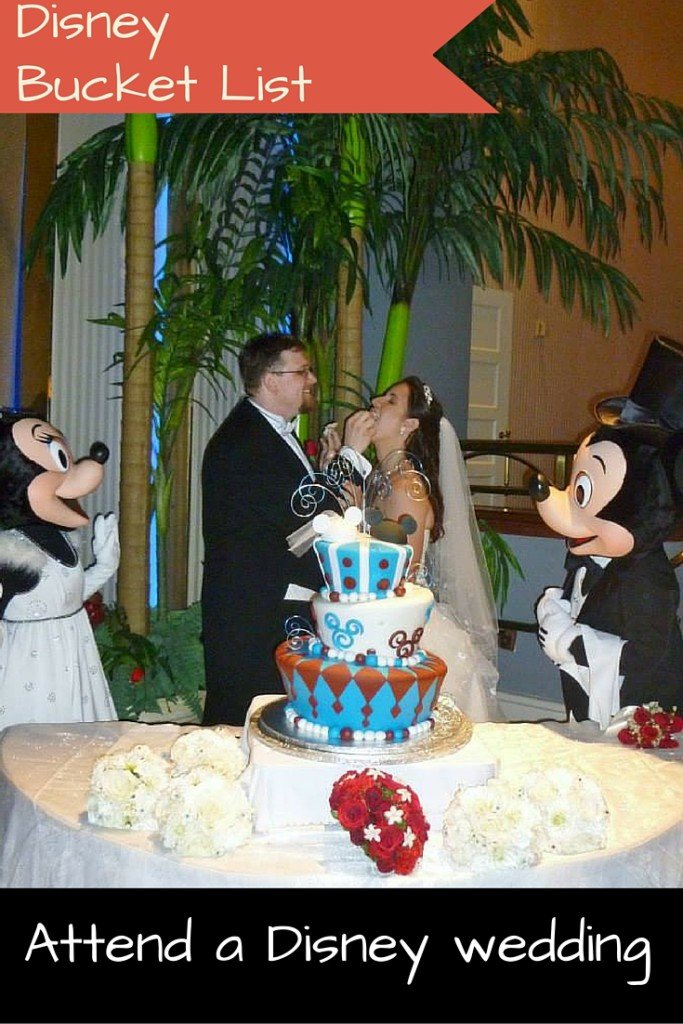 The Disney wedding community is one that I am particularly close to, even though I didn’t actually have a wedding at Disney.  However, when I was planning my fairy tale themed wedding I stumbled across the DIS boards while searching for inspiration.  There I found an amazing group of women (and a few men!) who were planning incredible weddings and offered a great support system.

Even though my wedding was now two years ago, I stay actively involved in this DisBrides community.  I have made close friends, people that I would now consider to be some of my closest friends, and I was lucky enough to be invited to attend not just one, but two Disney weddings: of my friends Megan and Chris, and Danielle and Bart.

Both of them had the ceremony at the completely stunning wedding pavilion.  This place was obviously built just for weddings, and it’s perfect.  Everything is beautiful – the glass with the carriage, the light colors, and even a view of the castle out of the window right above the altar.  The staged exit is also fun to do there – they have the perfect stretch of sidewalk.  In both cases, my friends used ribbon wands for their exit and I think it made for some great pictures!

Stained glass inside the wedding pavilion

They also both had their receptions at the Atlantic Dance Hall on the Boardwalk.  This was a really fun space to have a reception in!  There’s also a balcony were you can go outside and have a great view of the boardwalk.  There were plenty of room for both tables and a dance floor.  The DJ was able to play lots of dance music.  All of the food I had at both weddings was absolutely incredible.  Definitely some of the best meals I’ve had at Disney!  They were both buffets which meant I could have as much of something as I wanted 😉

Inside the Atlantic Dance Hall

View of the Boardwalk from Atlantic Dance Hall

Another thing that impressed me was how well Disney did with the cakes.  Two pretty different style cakes – one more traditional and elegant, the other vibrant and whimsical.  And both were absolutely perfect for their respective weddings.  They were beautiful but also had great Disney touches.  My one friend also had a Haunted Mansion themed groom’s cake.

Of course, the best thing about a Disney wedding is the little things that make it uniquely Disney!  Danielle had favors/escort cards that were chocolate mouse ears.  Megan created table signs themed after the different areas of the Magic Kingdom.  And both had “special guests.”  Where else could you have Mickey or Donald attend your wedding?  And not just attend, but party it up with the guests, right out on the dance floor!

Me hanging out with Minnie and Danielle and Bart’s wedding

Something else really fun that both couples did was have a private dessert party in the evening.  For Megan and Chris’s wedding we went to a Fantasmic dessert party.  We ate dessert first (inside, because rain was possible that evening).  They had Mickey pretzels, fresh fruit, and ice cream bars/sandwiches… but the highlight was the incredible sorcerer hat cake pops!  They looked amazing, and tasted great too.  After the food portion we were lead to a special Fantasmic viewing area, up behind the regular seats.

Danielle and Bart had an Illuminations dessert party.  We also started inside (again, chance of rain).  They had chocolate covered rice crispies and brownies, but the two big things were flambéed donuts with ice cream and white chocolate “popcorn” made with liquid nitrogen and berries.  Everything was fantastic but I really loved the white chocolate made with liquid nitrogen!  It was literally melt in your mouth.  After desserts we were lead to our private viewing area, where we had a fantastic view of Illuminations – and we were given special 3D glasses that made everything with light look like a Mickey head!  Definitely made the fireworks look cool!

All in all those two weddings are easily the two best weddings I’ve ever been to, and some of the most fun I’ve had period.  Disney definitely knows how to throw an amazing event, and my friends all did a wonderful job planning it!  I am so grateful to have been able to attend both of the weddings of some of my closest friends.

Have you ever been to a Disney wedding?  What was your experience like?