You are here: Home / Disney World / Breakfast and Dinner at Olivia’s Cafe 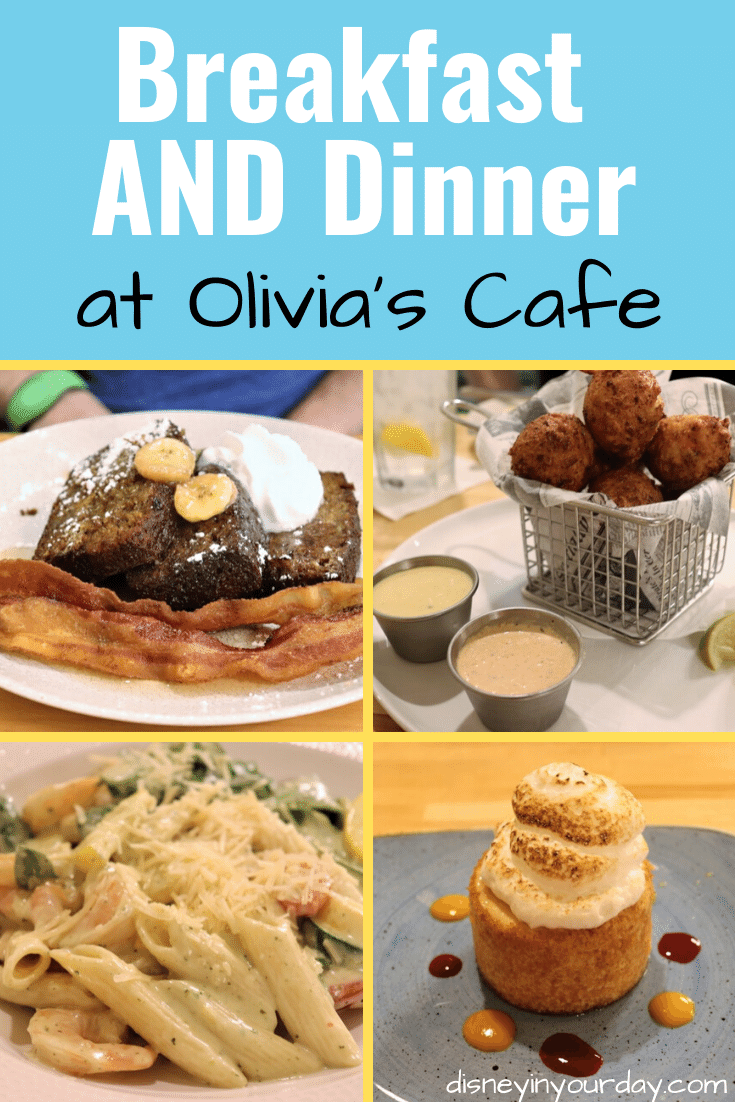 During our last trip to Disney we stayed at Old Key West, so we had the chance to dine at Olivia’s Cafe twice – once for dinner, and once for breakfast. I’d heard the food was good but it wasn’t usually too busy since it’s a little bit off the beaten path. We had a reservation for dinner but not for breakfast, but were seated right away both times. 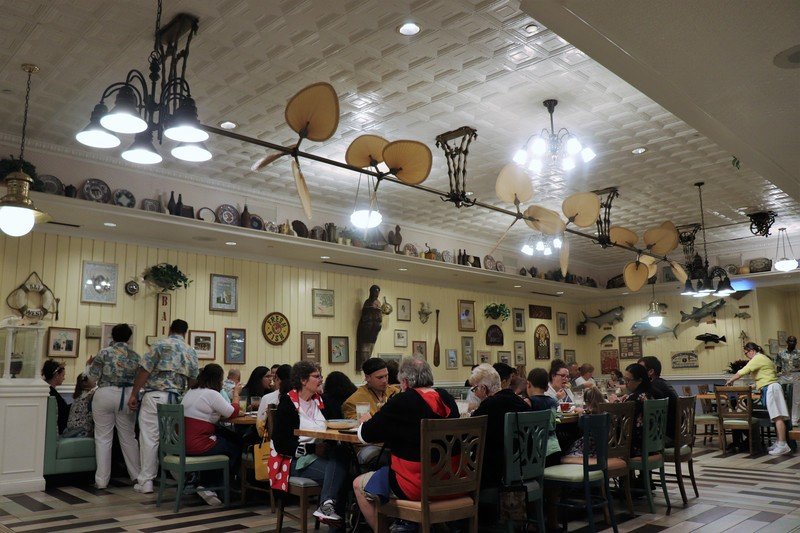 The restaurant has a funky vibe, with pictures and decorations on the wall which make it feel more like a “local joint” than a “Disney restaurant.” Which works perfectly here. They have island style food with lots of tropical flavors (think banana bread, coconut, pineapple). There’s also a small outdoor seating area.

As an eggs benedict lover, I knew what I was going to order for breakfast right away. I went with the Crab Cake Eggs Benedict (Two-Poached Eggs and Two-Pan Fried Crab Cakes on an English Muffin with Key Lime Hollandaise and Olivia’s Breakfast Potatoes): 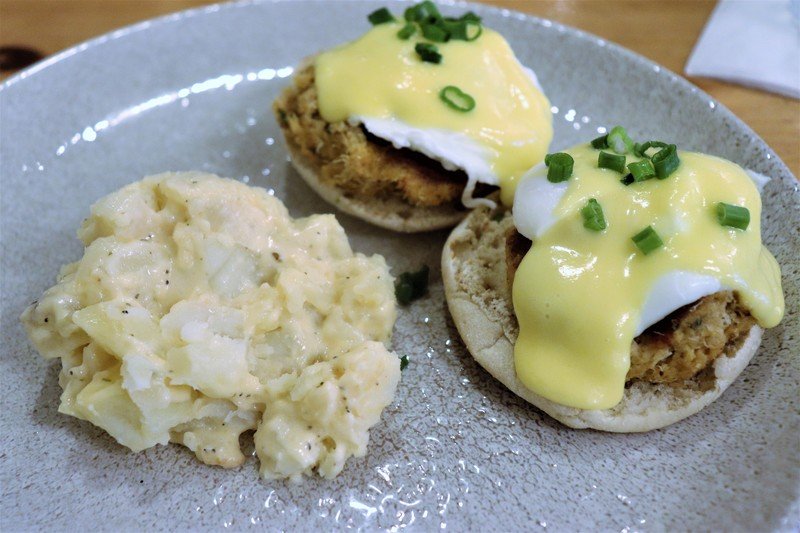 This was extremely tasty. The eggs were cooked perfectly and the crab cake was well seasoned. The English muffin was just your typical muffin, but the key lime hollandaise was quite good – the key lime flavor was subtle but it was definitely there. I didn’t eat much of the potatoes since I was filling up on the rest of it, but they didn’t stand out too much to me.

Jason wasn’t too hungry, so he told me to pick out what he should order so I could have some of it as well. I went with the Banana Bread French Toast (Topped with Bahamian Banana-Rum Syrup, Coconut Whipped Cream, and served with choice of Bacon or Sausage): 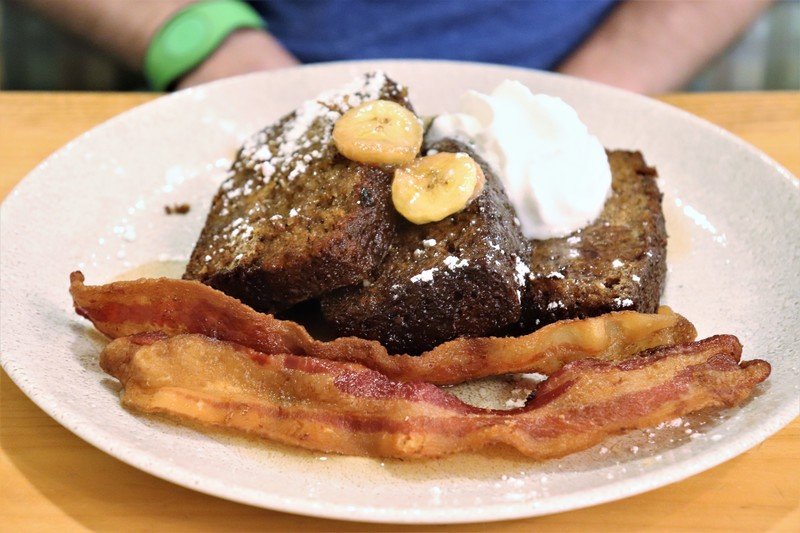 This is definitely one of those situations where it almost tastes like you’re having dessert for breakfast! The banana bread was excellent but made even tastier with the banana rum syrup. I also really loved the coconut whipped cream, as it had just a subtle hint of coconut flavor. It was so good and I’m glad we tried it – if you’re a banana bread or french toast fan you don’t want to miss this!

As tasty as breakfast was, dinner was the real highlight for us and why we would return to dine at Olivia’s again. From the beginning we had really great service. Our assigned server had also been given a table of 12, so she was very preoccupied – we weren’t in a rush but the manager came right over after we were seated to let us know that, and to take our drink order. He also brought us a basket of bread, which was their special pineapple coconut rolls. We devoured the basket and our regular server brought us another, that’s how good these rolls were! 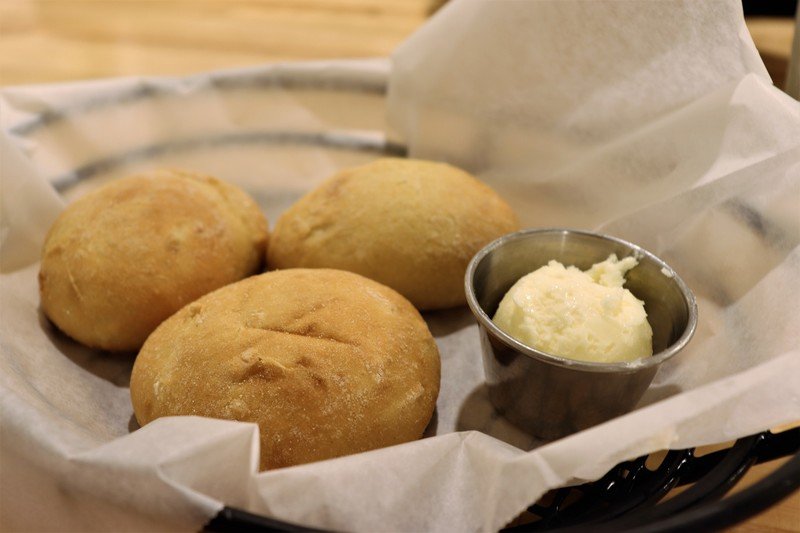 We decided to order an appetizer to share, and went with the conch fritters (Served with Key Lime-Mustard and Roasted Red Pepper Rémoulade): 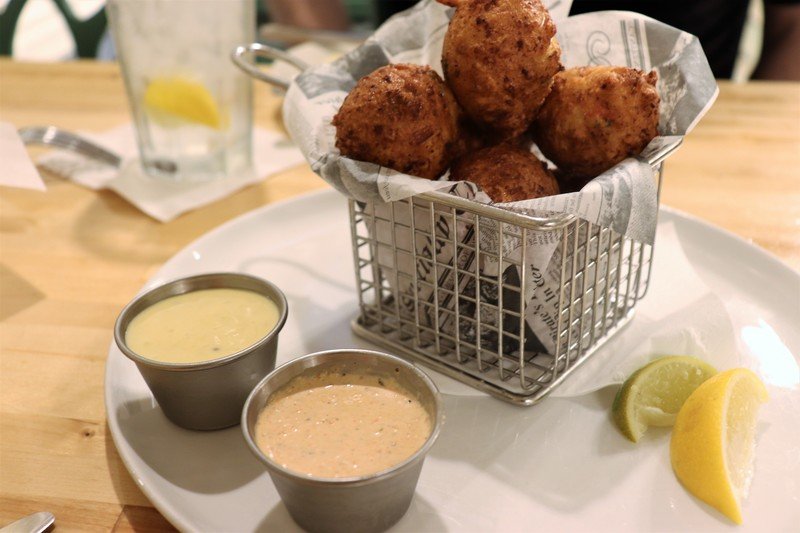 These little beauties were fried to perfection and were mouth-wateringly good. The dipping sauces just added a little more flavor and deliciousness. I loved the tangy-ness of the key lime mustard, while Jason favored the flavorful roasted red pepper remoulade – I thought that was good but had a strong red pepper taste and could have used more of a remoulade kick of spiciness. I’d definitely start the meal with these again if we came back for dinner.

For his entree Jason went with the Seven Mile Sea Scallops (Pan-seared Scallops over soft Polenta topped with an Edamame-Pancetta Succotash and Tomato Vinaigrette): 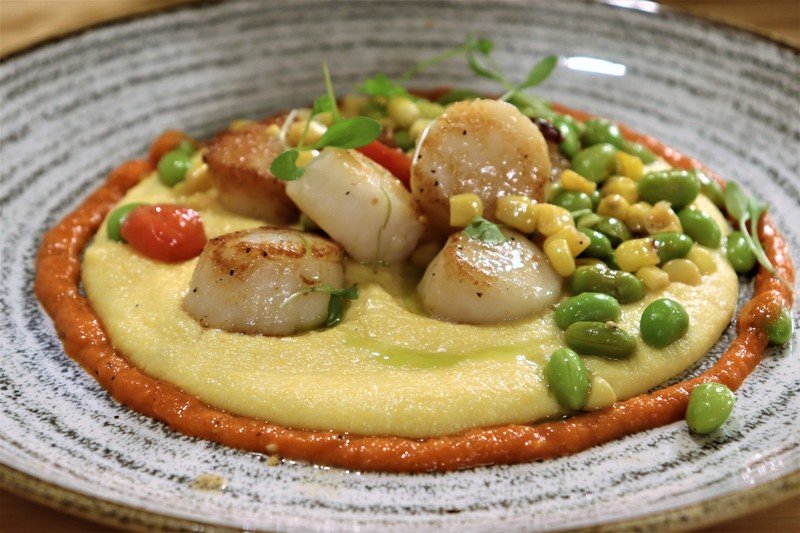 He went back and forth on what to order, but ultimately I knew he would go with the scallops because he loves them! And it was the right choice. He was a big fan, saying they were very well cooked and tasty. All of the accompaniments went well with it. To be honest, I think he actually enjoyed this meal more than than the steak he had at  Yachtsman later in the trip!

Since I was running the half marathon the next morning, I went with the Cayo Hueso Shrimp Pasta (Sautéed Shrimp, Zucchini, Yellow Squash, Grape Tomato, and Spinach tossed with Penne Pasta and Pesto Cream Sauce): 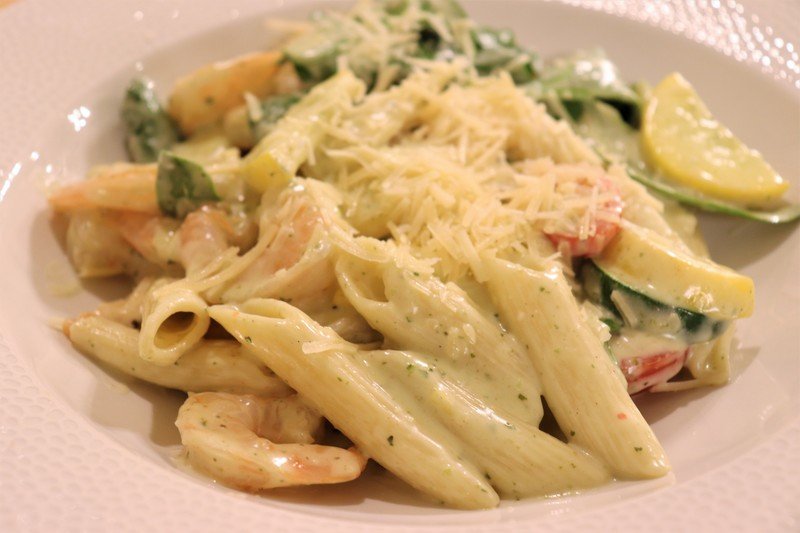 This was extremely delicious and full of things I love. It was so much better than the pasta dish I’d had the previous night at Mama Melrose. The pesto cream sauce was full of flavor and the veggies definitely complemented it. The shrimp were large and cooked well. I would get this again for a good carb load!

We did decide to share a dessert – and it being Old Key West it made sense to go with the Key Lime Tart (with Mango and Raspberry Sauce): 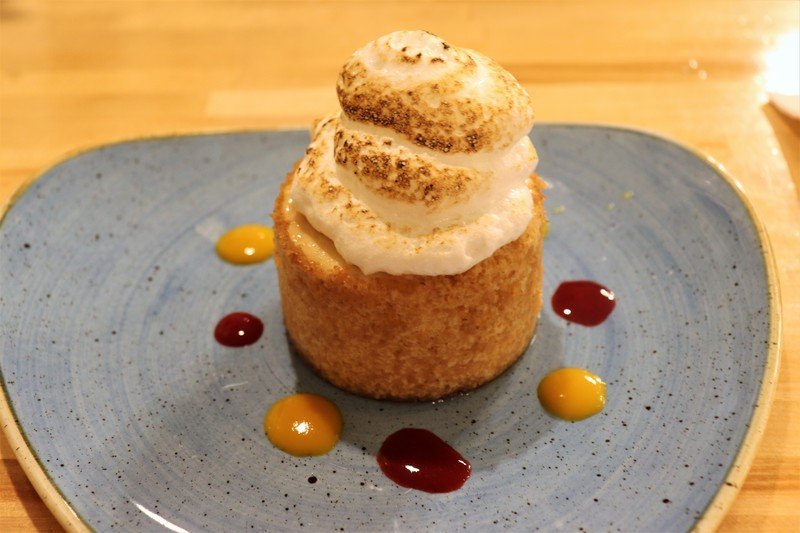 While this was good, I’ll be honest that it wasn’t one of my favorite desserts I’ve had. The consistency of the tart was a bit thick for me and there was a lot of the crumbly part of the tart. I’d prefer a key lime pie I think. We had one when we were actually in Key West that was amazing, so it’s hard not to compare it to that. However, the whipped cream on this was so good. It was toasted and Jason basically let me eat all of the whipped cream and then he had the rest of the dessert.

All in all Olivia’s was a really enjoyable meal for both breakfast and dinner, and we loved the vibe at Old Key West. I’d definitely stay there again, and would make a point to grab a meal at Olivia’s. If I had a car while staying or an easy way to get around I would probably go here for dinner one night even if I was staying somewhere else.

Have you been to Olivia’s Cafe? What do you think of it?