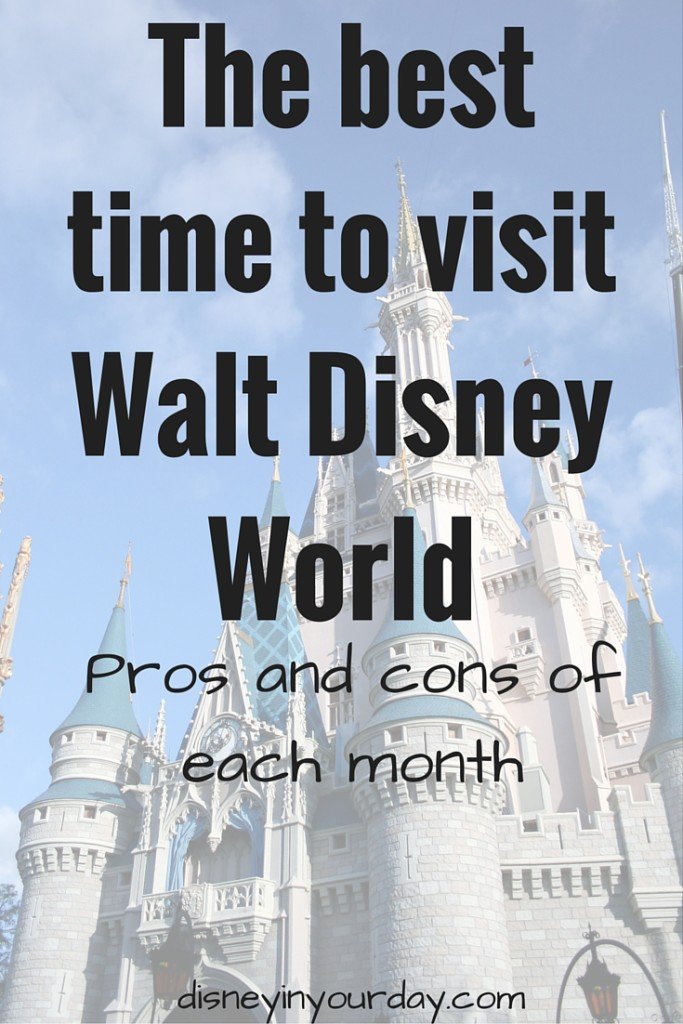 I can now say that I have been to Disney every month of the year (just not in the same year!).   And even when a month has been promising in years past doesn’t always mean that it will that year.  But I see this question asked a lot, so I figured I’d list some of the pros and cons of visiting each month, based on both research and personal experience.  In my opinion, there are three major things to consider when deciding when to visit – crowds, weather, and price.  This list is not comprehensive of every single thing, but it’s some good things to consider for people new to visiting Disney.

January – After New Year’s, the parks are fairly empty. Marathon race weekend is usually the first weekend in January, and things can get a little crowded then. After marathon weekend, though it’s not bad.  This is a good time to go if you really want to avoid crowds.  On the downside, a lot of rides close around this time for refurbishment, so if there’s something you absolutely must ride be aware of this – Splash Mountain is almost always closed in January, for instance.  The weather tends to be mild, though it can get a bit cold or hot.  It was in the 40’s during most of my January trip.  The only crowded times to look out for are marathon weekend (usually the resorts are much more crowded than the parks), and MLK weekend.  Prices are cheap for January due to the low crowds.  They’ve also recently started doing the Festival of the Arts in some of January and February.

Long sleeves were necessary when we visited in February!

February – February used to be a slow time, though it’s picked up a lot recently.  One weekend to absolutely avoid is President’s Day weekend.  I went last year during that time and it was crazy busy, not to mention that the prices for hotels and buffet meals go up.  The weekend of the Princess Half marathon can get busy as well.  The first half of February is usually better with crowds.  Weather wise, February can be all over the place.  I’ve been when it’s 40 degrees and when it’s 85! They’ve also recently started doing the Festival of the Arts in some of January and February.

March – The beginning of March is better than the rest of the month, because you start getting into spring break season and that’s when it starts getting crowded.  I went once during the first week of March and it wasn’t too bad yet.  The weather usually tends to be a little warmer than February but pleasant – usually in the 70’s or so.  Flower and Garden Festival starts this month.

April – April can get very busy because it’s the end of spring break season as well as Easter.  However, be aware of when Easter is.  If it’s early in the year then the end of April can be quite nice.  We went this past year during the last week of April because Easter was in March.  The crowds were low and the weather was very good – warm, with only one or two days that really felt hot.  In addition, you can visit Epcot’s Flower and Garden festival if you visit during April. Star Wars race weekend usually falls sometime in April too, so keep an eye on that.

May – May is also a mid-crowd level month, getting worse toward the end of the month as some schools start finishing or during Memorial Day weekend.  The weather is getting warmer too, but usually not unbearably hot.  Epcot’s Flower and Garden festival is going on, which I really enjoy.

June – Now you’re starting to really get into the summer, which is when the crowds go up and so does the temperature.  Early June is slightly better than the end of the month, but it will still be pretty crowded.

The 4th of July fireworks

July – The busiest it will be this month is around the 4th of July.  However, the positive side to this is that the Magic Kingdom does some truly amazing fireworks for the 4th of July.  Just make sure you prepare adequately for the heat and the crowds. Crowds are actually lower than many other months now because of people trying to avoid the heat – less people seem concerned with pulling their kids out of school, or they would rather take advantage of school breaks.

August – Very similar to July in terms of both weather and crowds. Lately August hasn’t been a bad time to visit at all if you’re concerned about crowds. It’s still very hot and you start to enter hurricane season towards the end of the month.

September – This is our favorite time of year to go because the parks are so empty.  We hardly had to wait for anything the entire week we were there for our honeymoon.  The only downside is that September is still incredibly hot, so you do have to deal with the temperatures (and it’s hurricane season).  Mickey’s Not So Scary Halloween Party runs through September, and Food and Wine Festival begins so Epcot can get crowded, especially on the weekends. Finally, because the parks are so empty Disney likes to offer discounts during time.

October – There’s plenty going on in October, and it gets very crowded.  There’s Mickey’s Not So Scary Halloween party, as well as Epcot’s Food and Wine Festival.  Food and Wine is a do not miss, but if you can try to visit it during the week instead of the weekends, which is when a lot of locals come out and it gets really crowded. October has probably been the busiest overall month in the past few years due to the better weather, all the events going on, and people believing it will be less crowded because it’s not summer (not true!)

November – Crowds tend to be lower for November, and the weather pleasant.  Thanksgiving week is peak crowd time though, so it will get busy.  In the beginning of the month you can catch Mickey’s No So Scary Halloween Party, and then for the rest of it you can do Mickey’s Very Merry Christmas Party (or, if you time your trip just right, you might be able to do both!).  The Food and Wine Festival is also finishing up at that point, and Wine and Dine race weekend occurs in the beginning.

The parks are beautiful during the holidays!

December – The beginning of December the parks aren’t too crowded, but it will get more and more busy as the month goes on.  One thing to note is that Pop Warner week usually happens the first week in December, which is when high school football players and cheerleaders from all over the country come to attend competitions.  While you may see them throughout the parks, the biggest impact is at the resorts, especially the values – it can get very crowded and noisy with teenagers.  Then you’ve got busiest week of the year – the week between Christmas and New Year’s.  The weather is similar to January and February, where it can be chilly some days and warm others.  Mickey’s Very Merry Christmas Party is going on, as well a Candlelight Processional and other holiday events.  And if you do chose to brave the crowds for New Year’s Eve, Magic Kingdom, Epcot, and Hollywood Studios all have big parties and fireworks displays.

What’s your favorite month to go to Disney?