You are here: Home / Disney World / Be Our Guest review 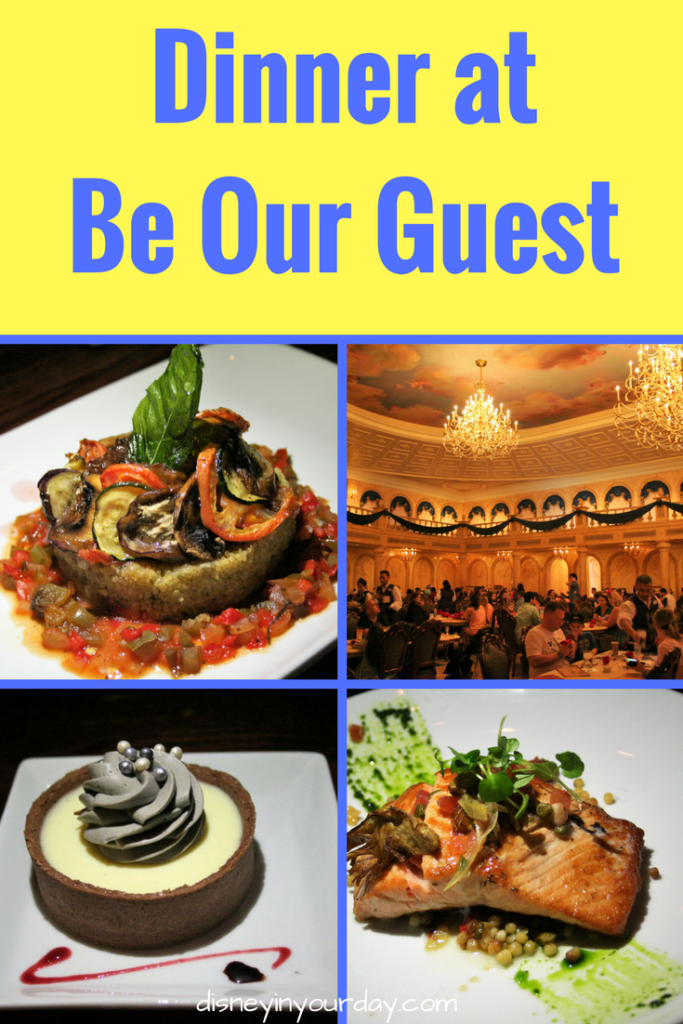 One of the most difficult dining reservations to get in all of Disney World is dinner at Be Our Guest.  If you’re aiming for this, you’ll want to be ready right at your 180 day mark and be flexible with the date or time you’re willing to eat there.  Hopefully if you do this things can work out in your favor and you’ll be lucky like us – a reservation for 7 people at 7pm!

Some people argue whether or not it’s “worth” the hype, but I think it is – or at least, it’s a restaurant I definitely enjoy and will come back to for multiple reasons. The first is the atmosphere.  They did an amazing job with it. If you’re a Beauty and the Beast fan, you kind of have to eat here just to experience it. The ballroom is running, the West Wing is suitably spooky but somehow still beautiful with the rose glowing in the corner. And I actually think the food is really good. I know some people don’t think it’s all that wonderful, but everything I’ve had at dinner has been excellent.  And finally, the dining options in Magic Kingdom are still not all that stellar in terms of table service, so this one is by default more popular since you don’t have a ton of other options (like at Epcot). 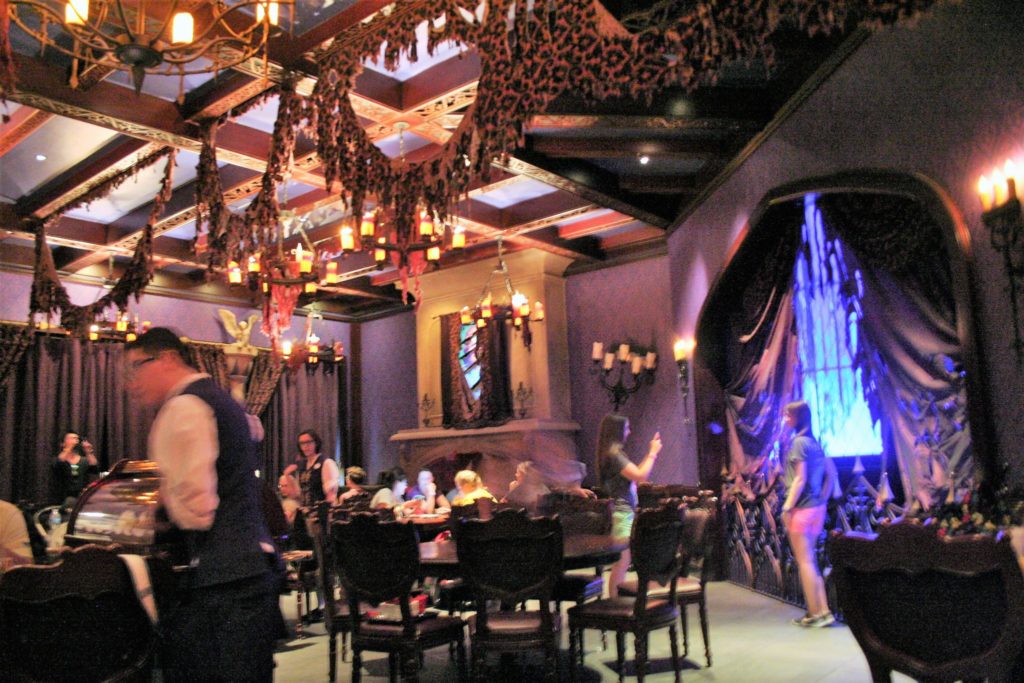 I have dined at Be Our Guest many times.  I’ve had breakfast there twice, lunch 3 or 4 times, and dinner 3 or 4 times.  The last time I did dinner there was probably about two years ago, and the menu had changed a bit so I was glad to come back and try some new things.

I’m curious to see how things will change with Be Our Guest in the future. Disney recently announced that Be Our Guest would become a signature restaurant.  That means more expensive, but also hopefully even better quality food. It also looks like it will be a prix fixe menu for one set price (sounds similar to how Cinderella’s Royal Table is currently done). 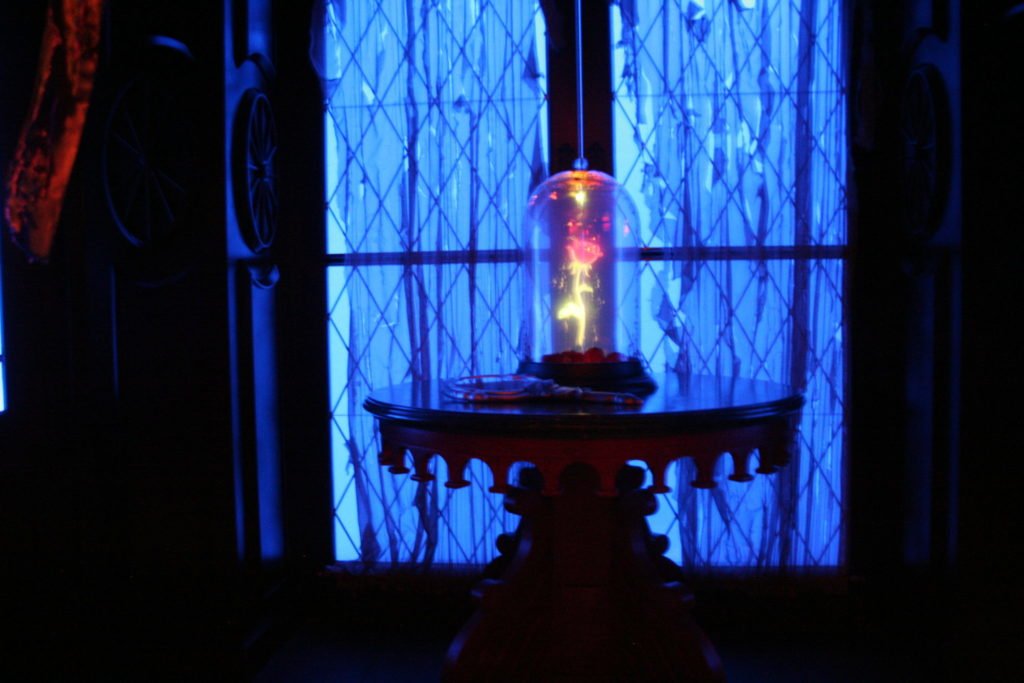 We had done Beaches and Cream with the Kitchen Sink around noon that day, so I was thinking a 7pm reservation for dinner would be enough time to get hungry again. And while some of us regained our appetites, not everyone was fully ready for a big dinner. But food at Disney is good, so we plowed on anyway!

As much as I wanted to try an appetizer, I knew dessert was more of a priority so I skipped it. We did have several appetizers ordered at the table though. The first was the cheese plate: 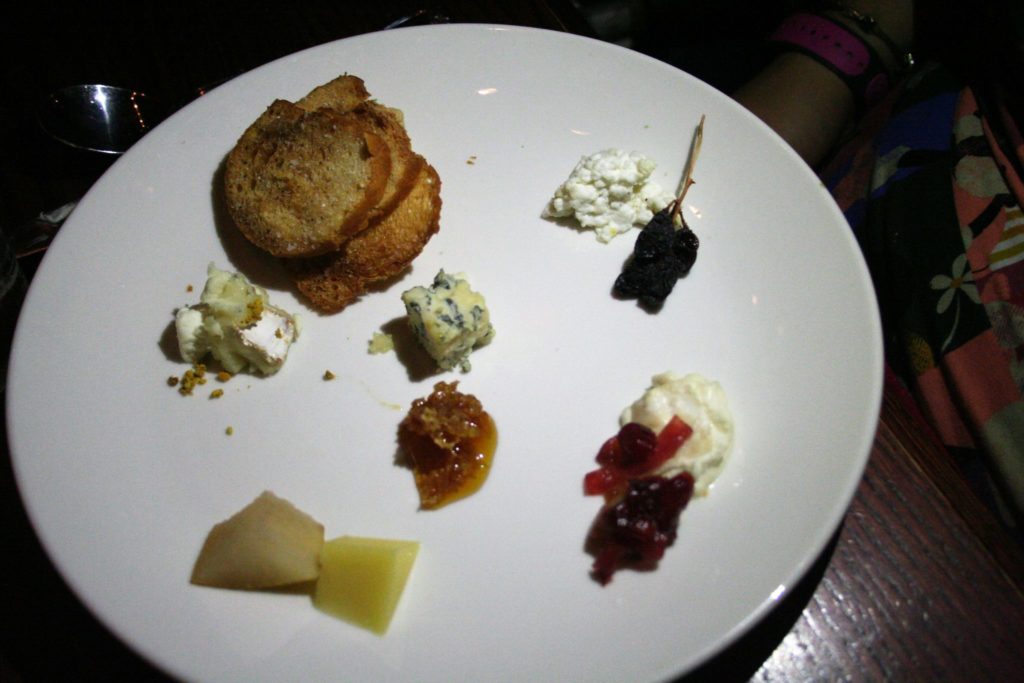 My friend really enjoyed the cheese plate, I believe her response when I asked her about it was “f**** delicious” (this is still a family friendly blog, y’all).  I’m not sure exactly what the cheeses were – oddly enough they didn’t explain when they brought it and we didn’t ask.  The only one she didn’t care for was a goat cheese, and goat cheese is definitely just for certain tastes.

The second appetizer was the Marseilles-style Mussels (Steamed in a Smoked Tomato and Saffron Broth served with a Garlic Crostini): 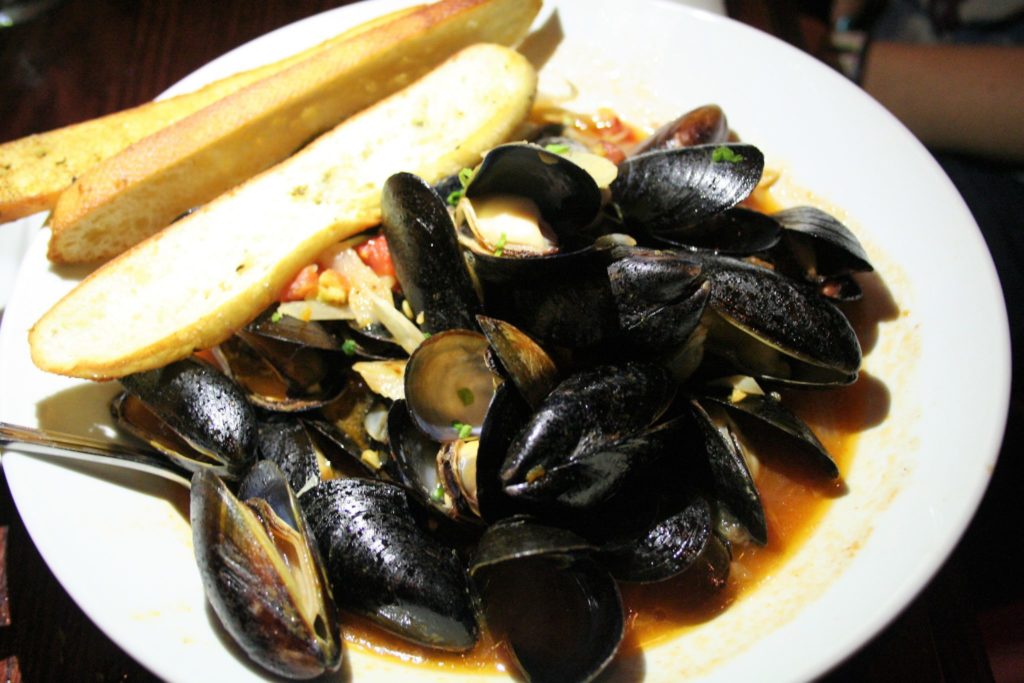 “The mussels were a bit mild for my taste but still good, and definitely big enough to be an entree.”  Indeed, there were a ton of mussels here. They definitely got passed around the table because people were not going to have room for their entrees.

And then there was the garden salad (Roasted Butternut Squash, Goat Cheese, Dried Cranberries, and Pumpkin Seeds with Lemon Vinaigrette): 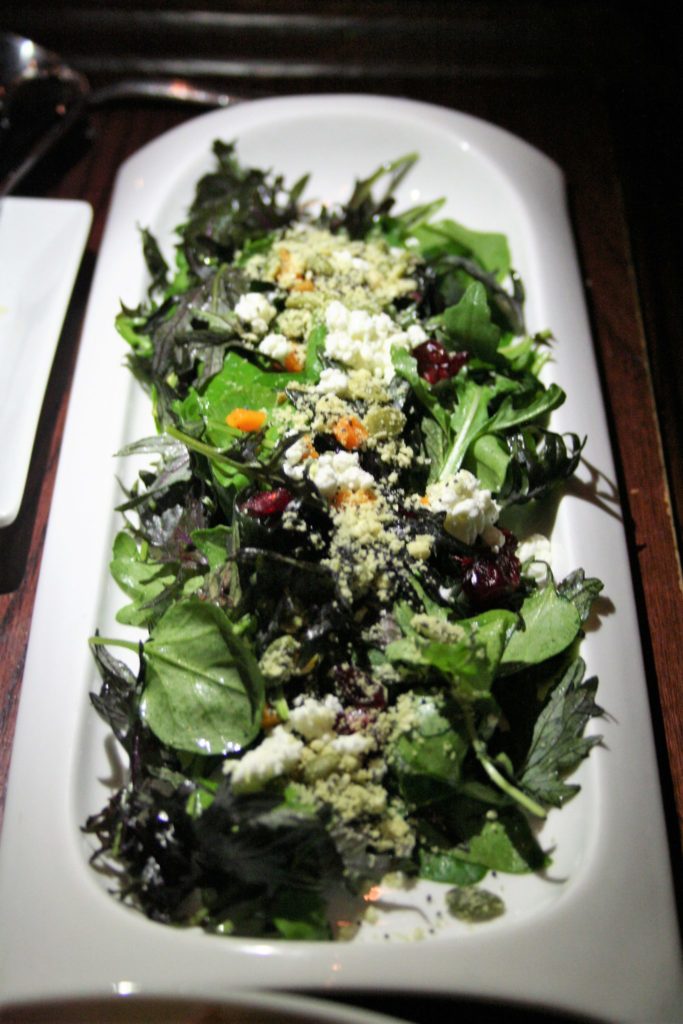 “The salad was a pretty standard salad but was really good. Really light.”

There was also the Seasonal Salad Trio: 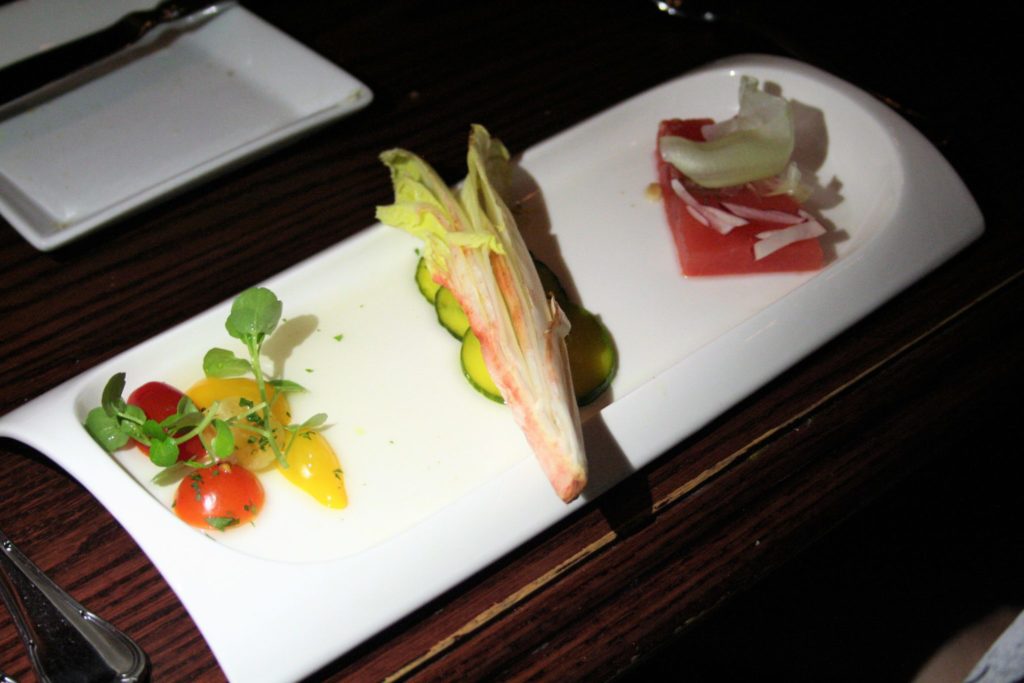 These salads were unusual, so they may not be the best choice for picky eaters.  One was a watermelon salad, one was a tomato salad, and I apologize because I forget what the middle one was and I can’t really tell from the picture (especially since I didn’t eat it).  This was one of those dishes that seemed to go for presentation over substance.  Look at that “tomato salad.”  I hope this isn’t the way that things are going to go for when it becomes a signature restaurant.

On to the entrees! I was pleased with my group as everyone actually ordered something different this time. Better bloggability – I approve 😉 Side note – I feel like I actually have a pretty good sense of humor that doesn’t always get shown in my writing because I take it rather seriously. But I promise I can be pretty funny. I do in fact walk around Disney World doing odd things, often involving photographs, and just yell out “#fortheblog!”

So luckily #fortheblog we have a wide variety of entrees to share with you! The first is the Grilled Strip Steak (with Garlic-Herb Butter and Pommes Frites): 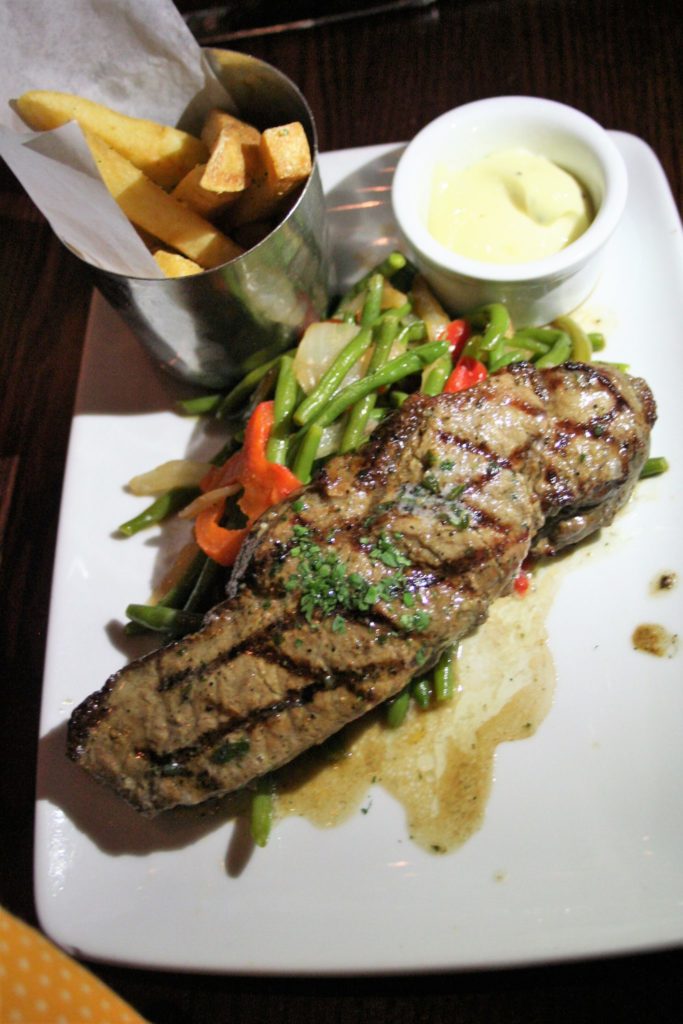 My friend said it was very good, though the steak was a little fattier than she expected.  The pommes frites are just typical french fries. I feel like when they first opened Be Our Guest the french fries were more spiced, with herbs and maybe garlic, but that doesn’t really seem to be the case anymore.

One friend tried the Seasonal Sustainable Catch Du Jour, which for that day was salmon: 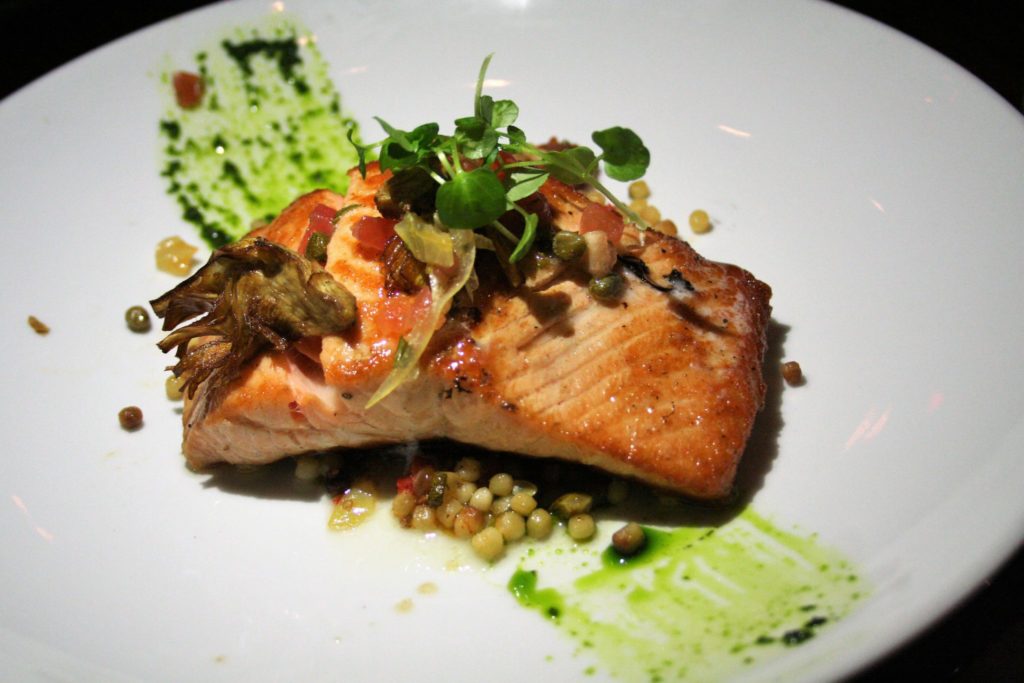 “The salmon was…fine. good, but nothing special.”  I didn’t get a chance to try it but it at least looked pretty. #fortheblog 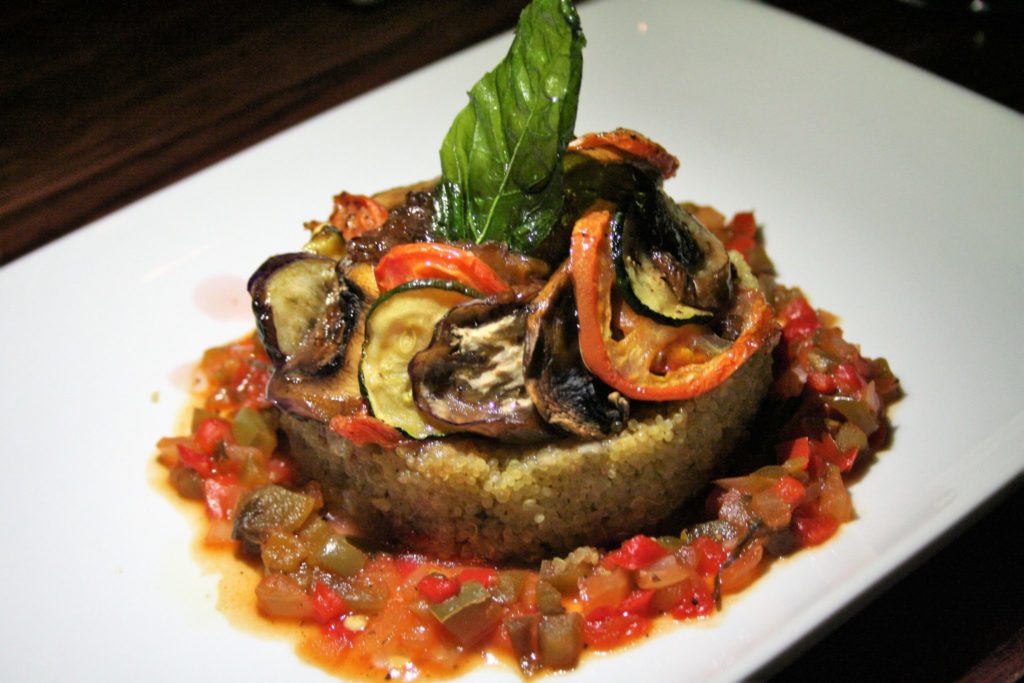 This dish was a hit. She said she loved it, and that the veggies were nice and crisp, not mushy, and the sauce was very tasty.  A good vegetarian option.

My husband ordered the Roasted Pork Tenderloin (Served with Cauliflower Silk, Sautéed Greens and Turnips, and finished with a Cherry-Mustard Sauce): 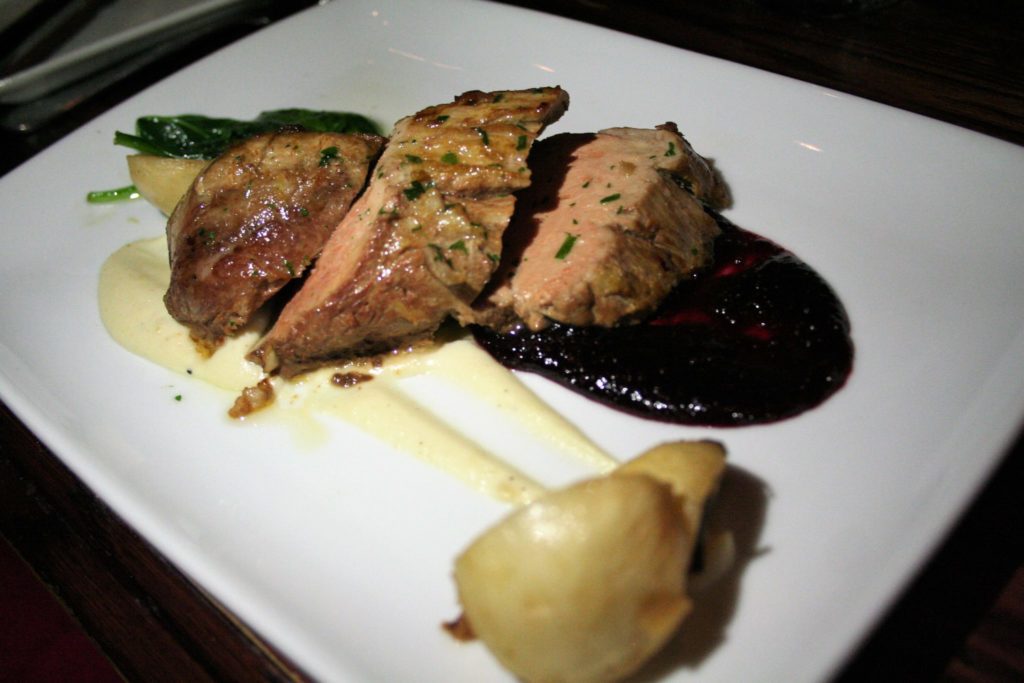 He loved this dish. He ordered the pork when Be Our Guest first opened, and though the sides have changed the quality of the pork has not.  “A properly-cooked pork chop deserves the same kind of praise as a good steak, but you don’t see people talking about “pork chop houses” like you do “steak houses” f you like steak but not pork, you shouldn’t rule out the thought that maybe you simply haven’t had a properly done pork dish. Be Our Guest was one of the places where I’ve had a really delicious pork dish, so it’s the place to try it.”  Oh, and the cherry mustard sauce it came with was delicious too.

And for my entree, I went with the Sauteed Shrimp and Scallops (with Lobster, Mushrooms, and Seasonal Vegetables in a creamy Lobster Sauce): 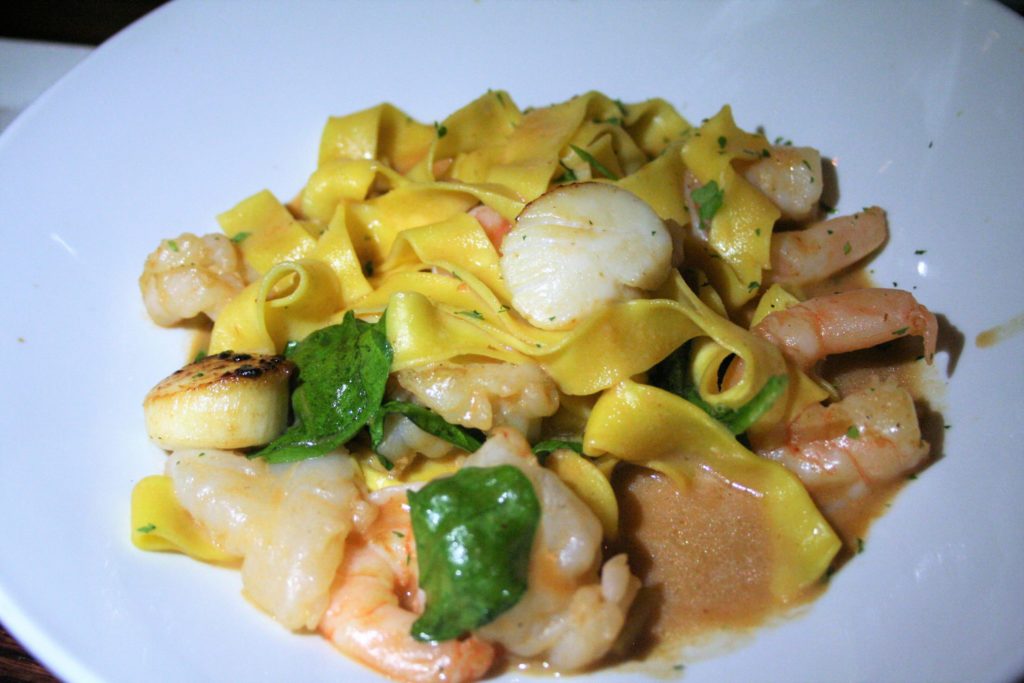 It doesn’t say it directly, but this is a pasta dish.  I think you could make that assumption, but I’m always a little surprised that the menu doesn’t specifically mention any sort of pasta to make that totally clear. I ordered mine without the mushrooms since I’m not a fan of fungus.  I love this dish. I had it several times when it was the shrimp and scallops in sauce served in a puff pastry, and it’s still delicious over pasta. The sauce is really excellent, it has a lot of flavor. The scallops were well cooked, which can be hard to do, and there were a number of large chunks of lobster.

Only two of us were able to order dessert due to being so stuffed.  One friend could not pass up the chance to try the grey stuff: 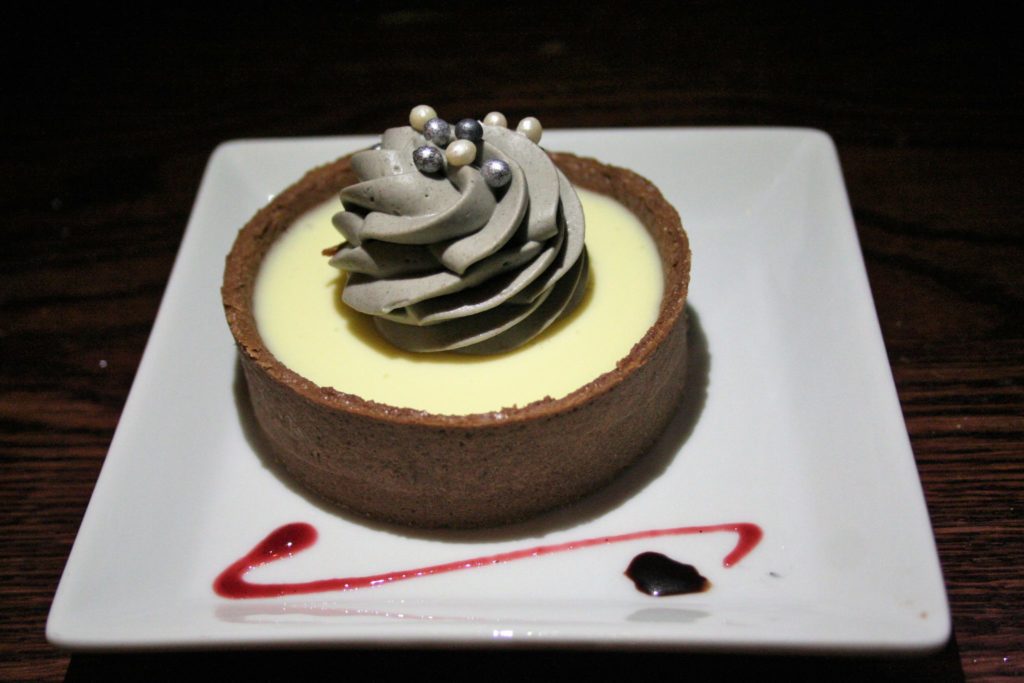 The grey stuff was in a different form than we’ve had it before. Over the years it originally came just as a bit of mousse on a plate for special occasions, then it was a brownie type thing with grey stuff on top, then a chocolate cupcake with grey stuff icing.  This was a white chocolate mousse with some grey stuff on top. Everyone agreed it was better when it was paired with regular chocolate, like in the cupcake.  All of the grey stuff was eaten off the top, but I don’t think the white chocolate was finished.  I’m thinking they were trying to make it a more fancy dessert for dinner, but I’m not sure this worked.

I might have been full, but what’s a blog dining review without a few desserts? So Jason and I decided to share the Lemon Meringue cupcake: 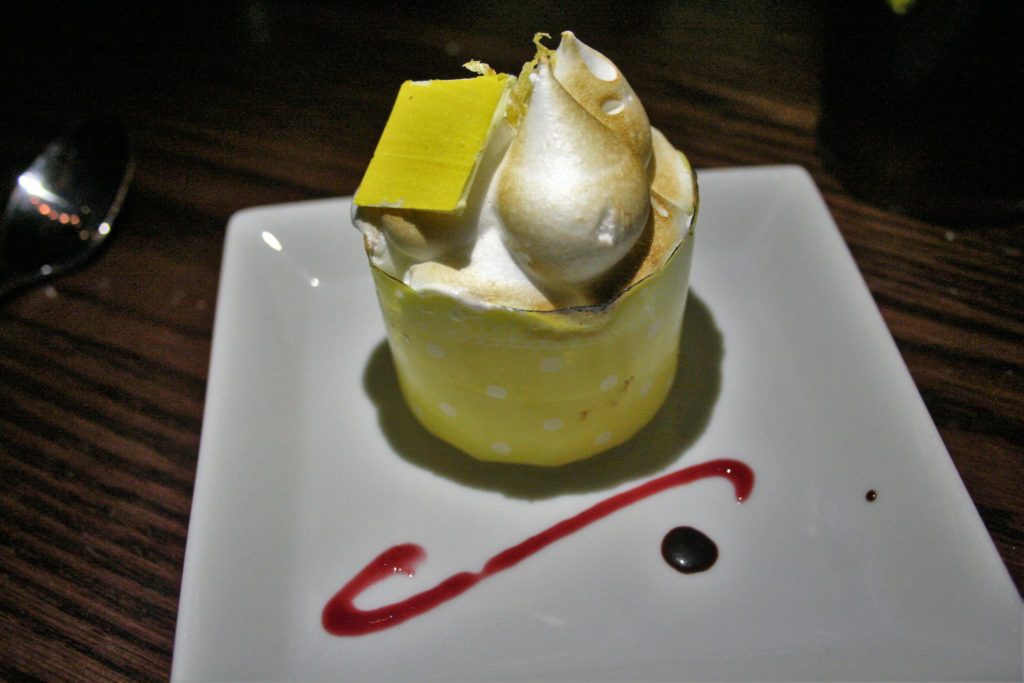 This was tasty, and an enjoyable cupcake. Nothing insanely good, but an excellent sweet craving, especially for those who might not care for chocolate. The meringue icing was very good, and despite being a cupcake it still feels like a “lighter” dessert.

And as part of dinner (not breakfast or lunch) you also get to meet the Beast afterward in his study and grab a photo! 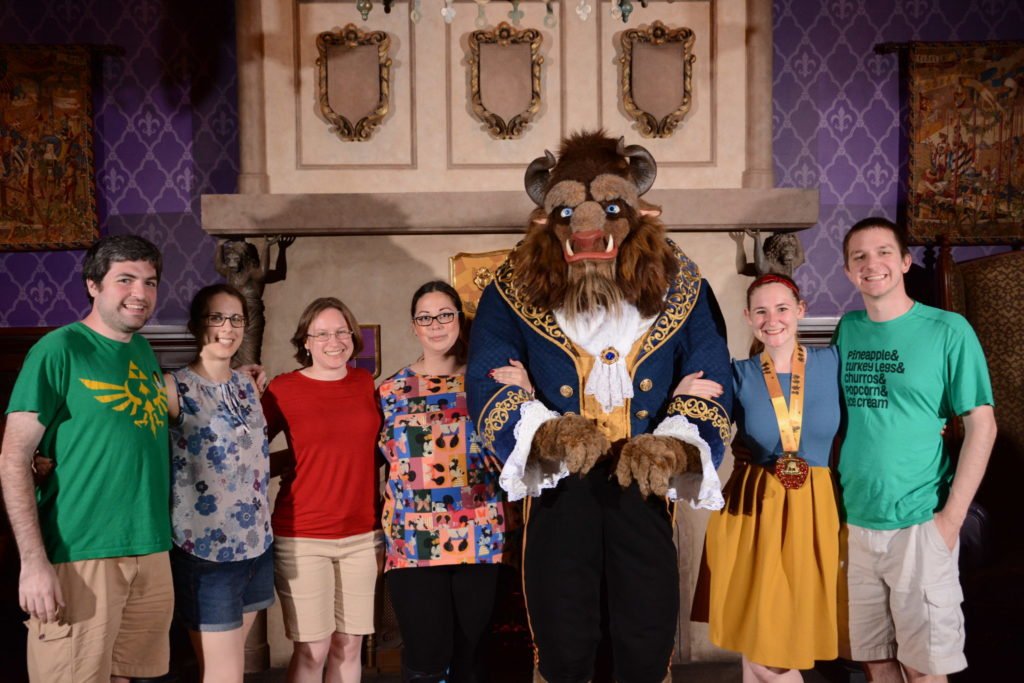 We very much enjoyed most of the food we’ve had during dinner at Be Our Guest, so I’m a little nervous to see how things change this summer. Hopefully it only gets better!

If you enjoyed this article, you may also like my recipe for the Grey Stuff or my review of Skipper Canteen!

Have you tried Be our Guest for dinner? Would you want to eat here?