You are here: Home / Disney World / Be our Guest – new signature menu 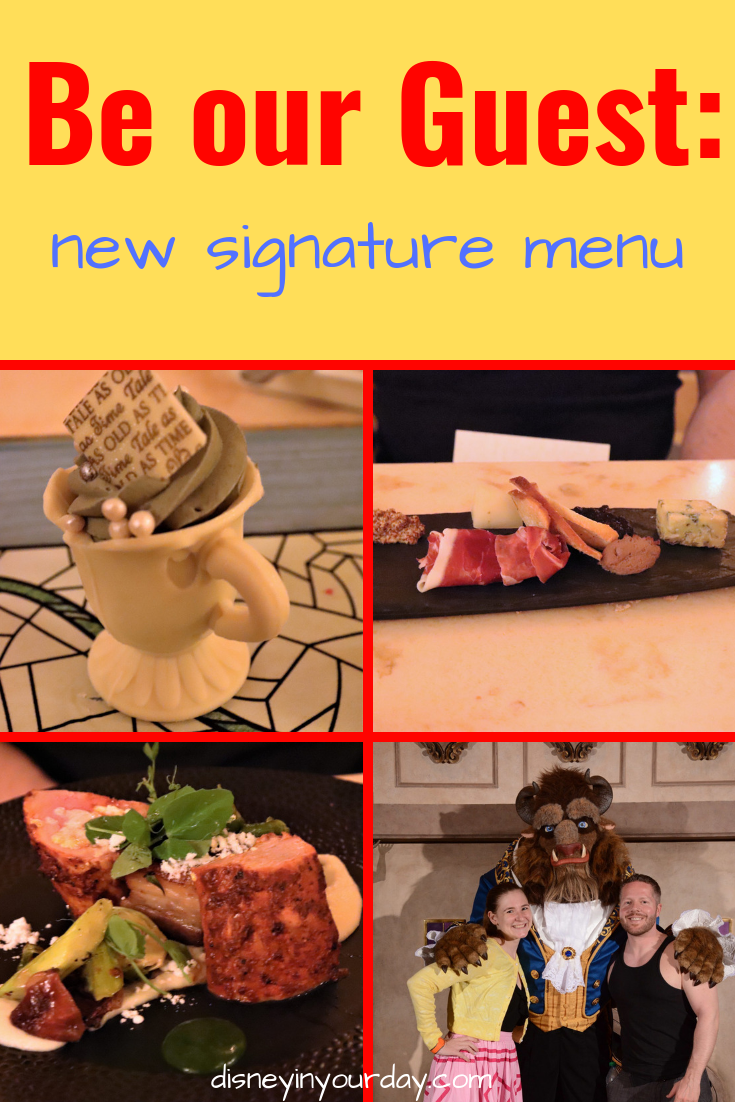 Be our Guest has been one of the most popular restaurants in Disney World since it opened. If you want a dinner reservation at Be our Guest, you pretty much have to be flexible and ready to go 180 days ahead of time. Due to its success they began offering lunch and breakfast quick service options, but dinner was still the most wanted meal – in part due to it being a relative bargain on the dining plan and partly because you get to meet the Beast.

Disney took advantage of this success a few months ago by turning dinner into a more expensive, signature dining experience. It’s now two credits on the dining plan and is a prix fixe menu. That means you get an appetizer, entree, dessert, and non-alcoholic beverage included for the price of $60 (for adults, $36 for children). 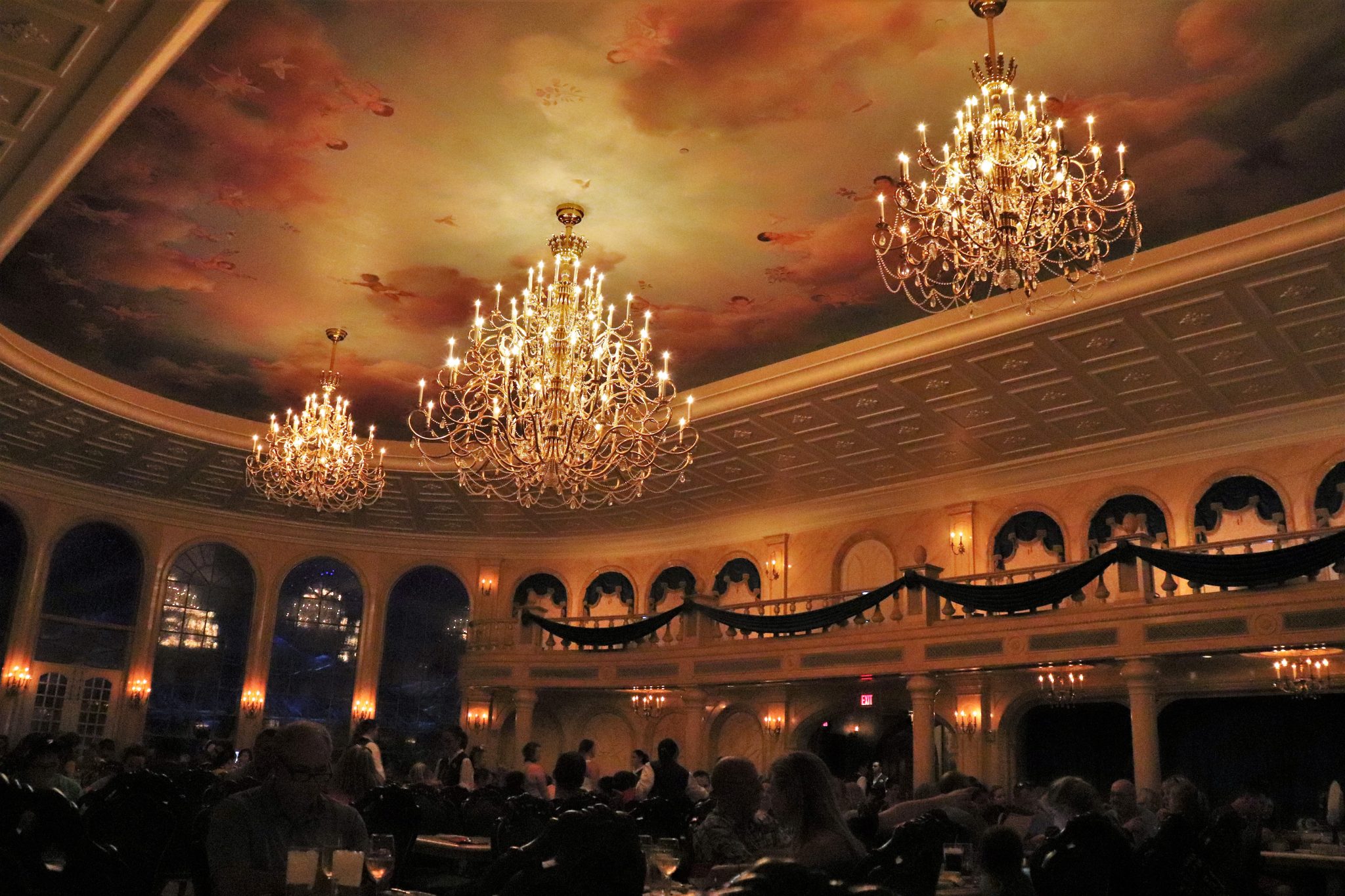 There is no denying that the atmosphere is one of the most amazing things about Be our Guest. For big fans of Beauty and the Beast (like myself) it’s breathtaking. You will be seated in one of three rooms: the main ballroom, the Rose Gallery (decorated with paintings of Belle’s adventures), or the West Wing (complete with enchanted rose). This meal we were seated in the ballroom.

You start out with a basket of rolls and salted butter, which is always enjoyable. My dining companion and I both decided to pay extra to get an alcoholic beverage, in addition to the non-alcoholic one included. I went with the Enchantée Rosé (Enchanted) Gérard Bertrand Syrah  (This wine is succulently fruity on the palate with rich notes of ripe cherry, muddled strawberry, and a crisp finish): 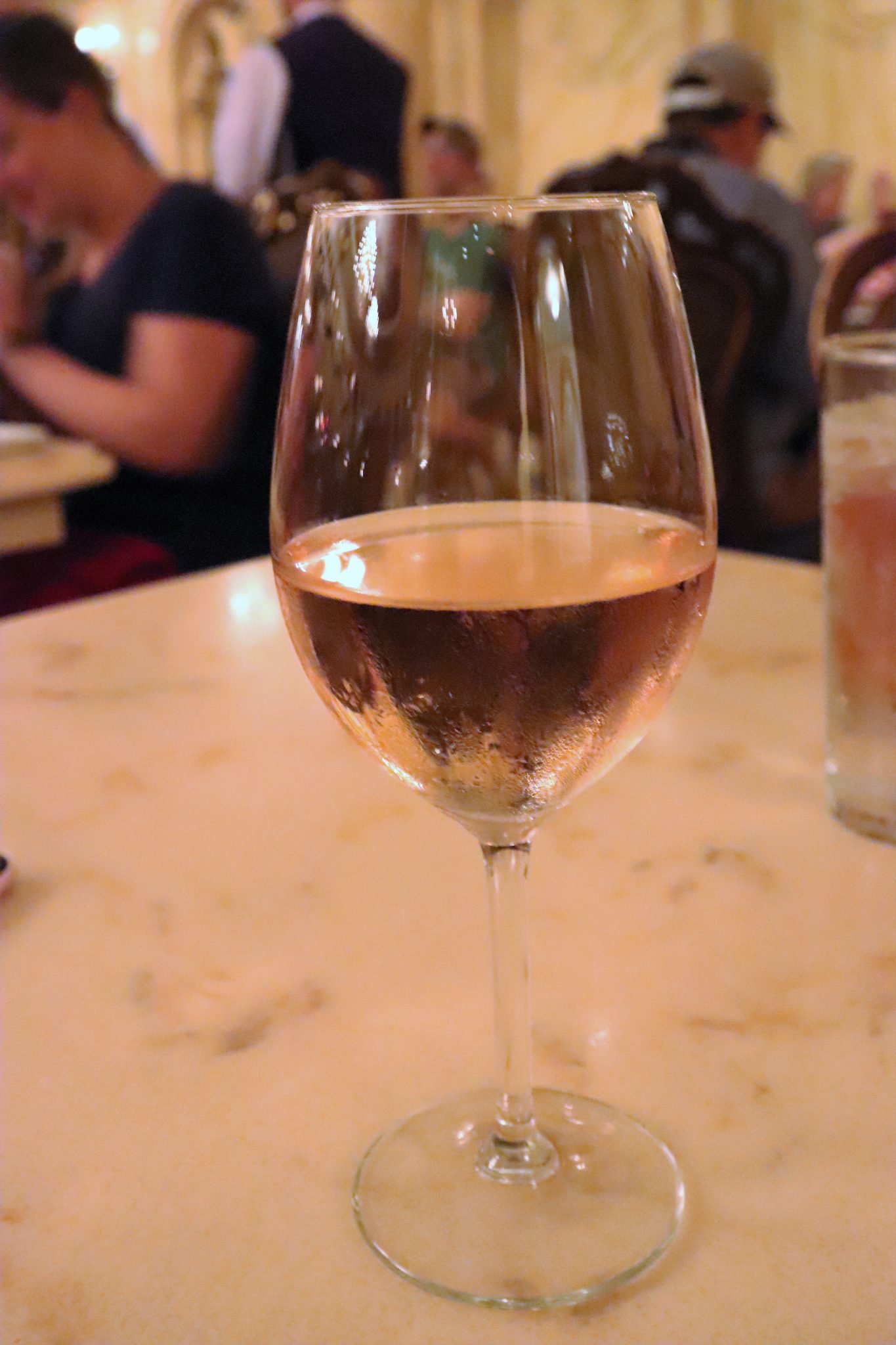 I enjoyed it. This was a pleasant rose wine that wasn’t too strong, which was nice. Since I was running the 10k the next morning I still wanted to enjoy one glass of wine but didn’t want it to affect my running.

My friend went with a beer. Normally a Miller Lite drinker, I was proud of him for choosing an IPA this time! He had the Cigar City Jai Alai IPA, Tampa, Florida (Bold orange peel and hop flavors with a hint of caramel and a rich malt character on the finish). I’ve had this before and I know it’s a pretty good IPA. He liked it enough to order a second!

We each got an appetizer included with the meal. The first one was the Assorted Meats and Artisanal Cheese Selection: 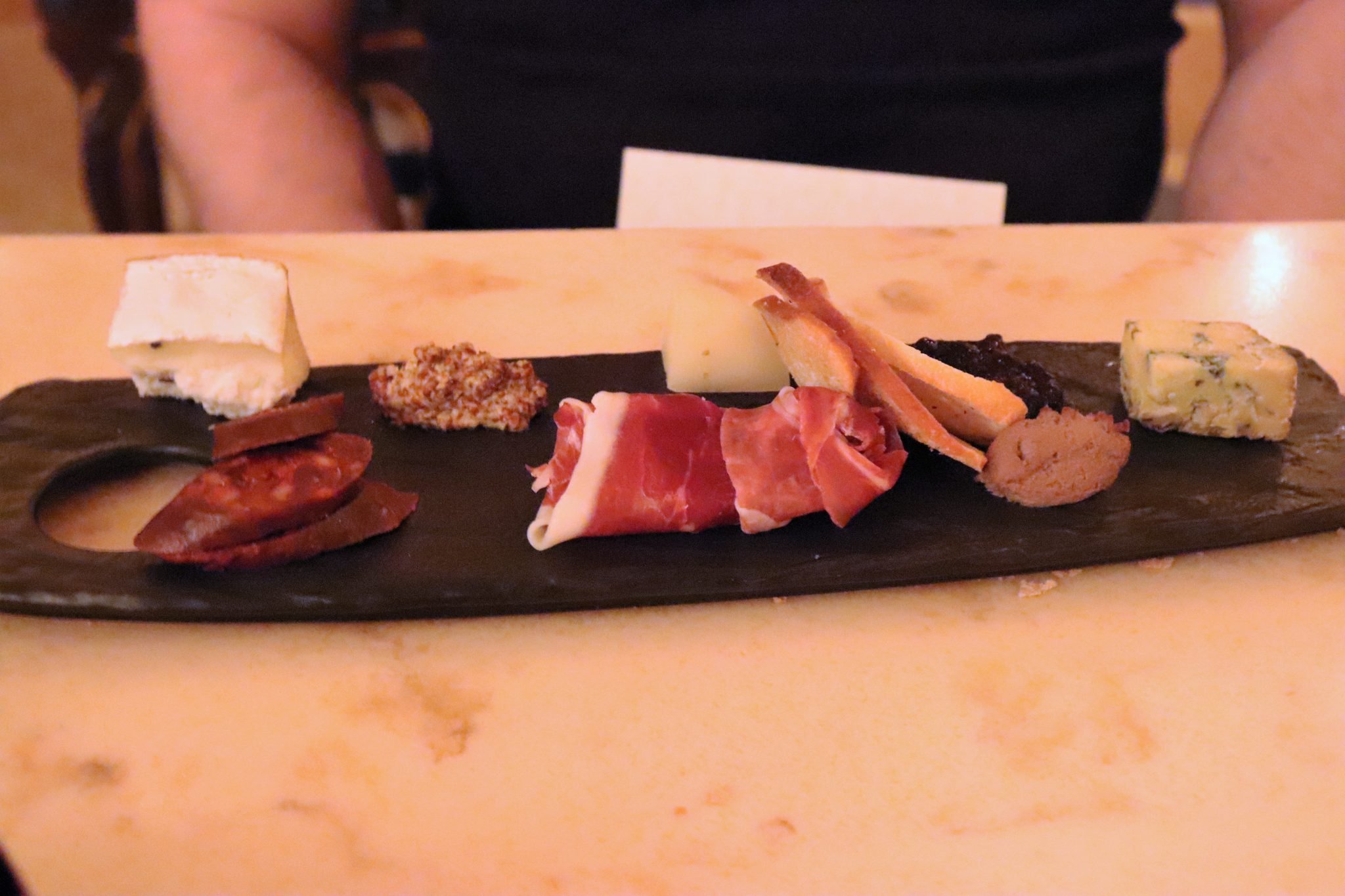 There was a goat cheese, cheddar, and blue cheese – the blue cheese was definitely my favorite. My friend really enjoyed the chorizo on this plate as well. You also had a serrano ham and chicken liver pate.

My appetizer was the Maine Lobster Bisque (Crème Fraîche and Poached Lobster): 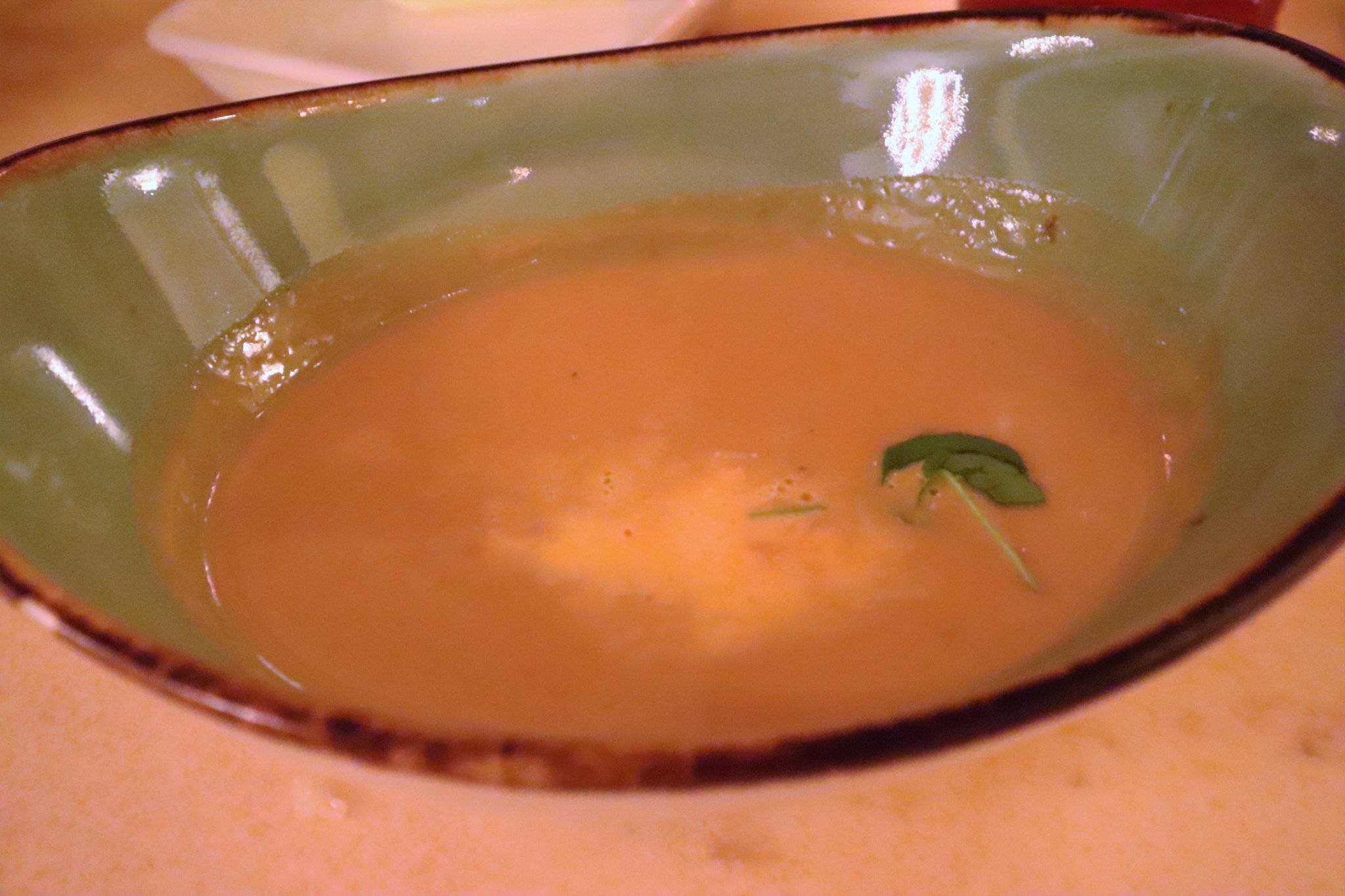 This was quite good! It was not as thick as I’m used to seeing from a lobster bisque, which I actually appreciated because that made it feel lighter. With an entree and dessert coming it was a nice way to start the meal. There were a few small pieces of lobster and the soup was very flavorful.

My friend got the recommendation from our server, and I can tell you right now he definitely picked the superior entree out of the two of us. He went with the Roasted Pork Tenderloin (Crispy Berkshire Pork Belly, Caramelized Cipollini, Roasted Asparagus, Brussels Sprouts, Cauliflower Purée, and sprinkled with Bacon Dust): 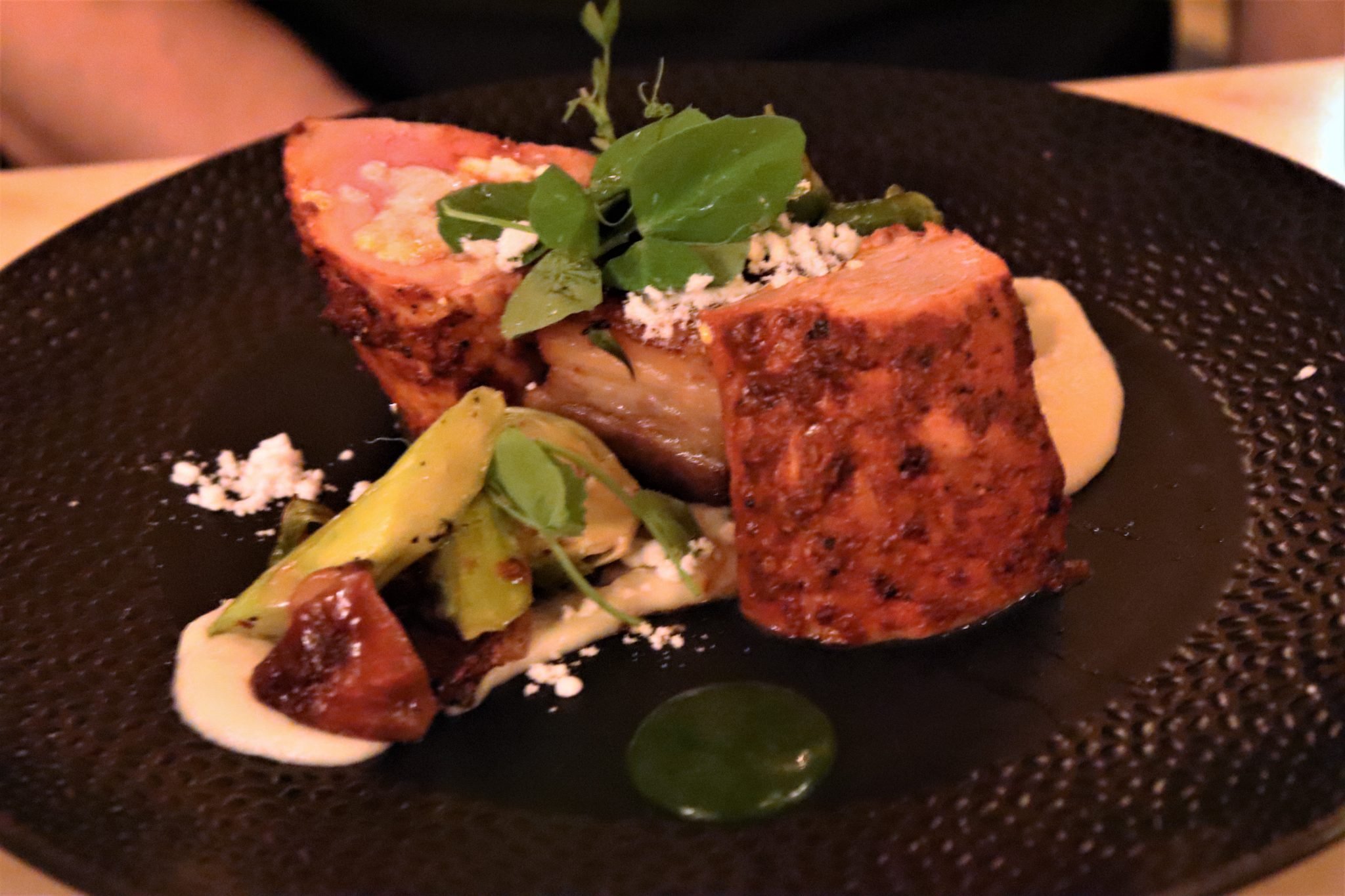 It was well cooked pork and all of the flavors worked together really well.

I, on the other hand, had the Poulet Rouge Chicken (Faro Wheat Risotto, Seasonal Vegetables, Crisp Pancetta, and Garlic Butter Sauce): 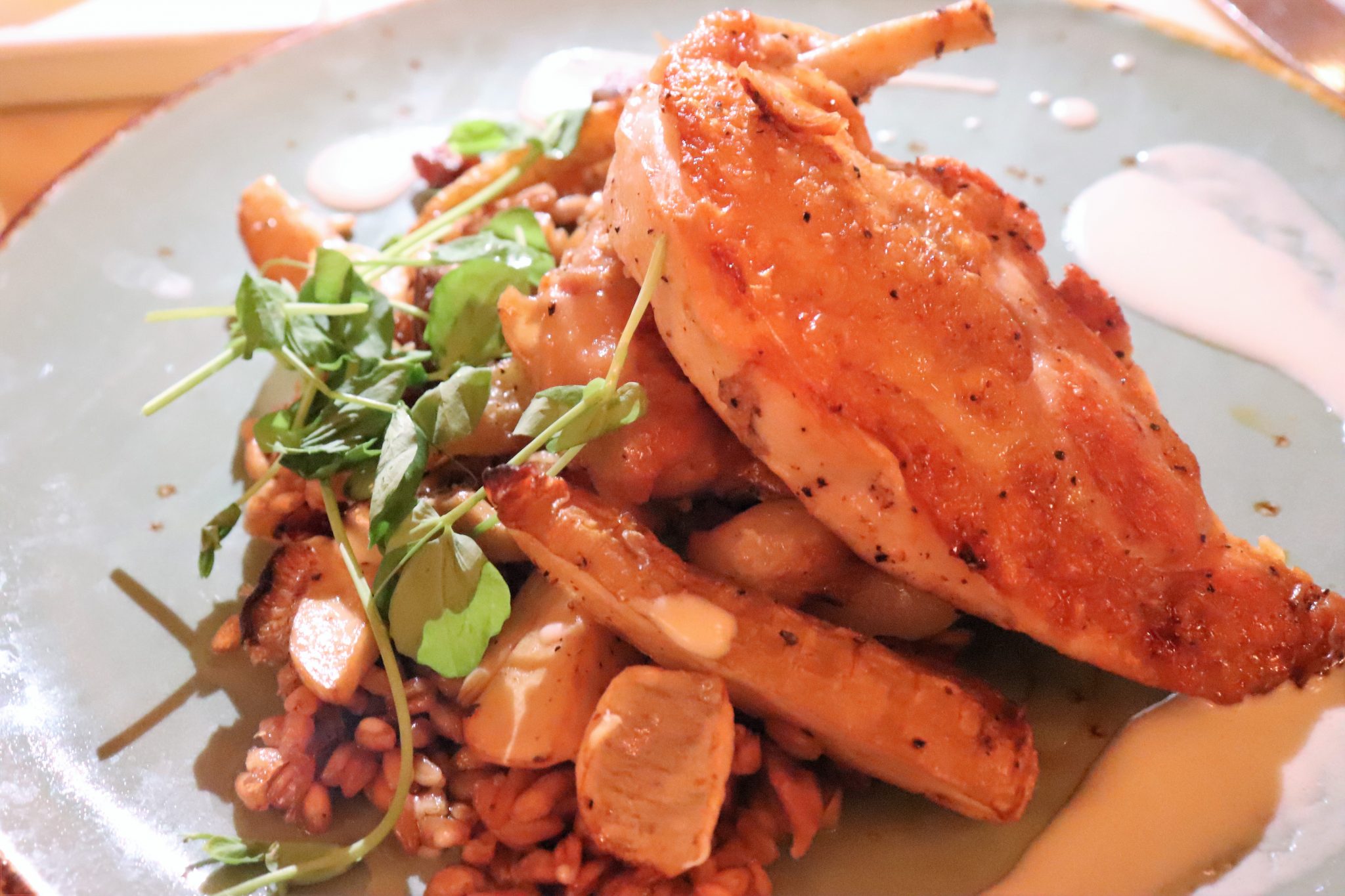 It was fine. It was a decent meal, but nothing special. Honestly, I ordered it because I wanted something a little more carb heavy and this had “risotto” listed in the description. I did get the carbs, but look at that (the grains under the chicken) and tell me that’s risotto?  As far as I’m aware risotto is supposed to be creamy… this had no creaminess whatsoever. It was just eating cooked farro. So that was disappointing. The chicken was fairly flavorful but there wasn’t much of the garlic butter sauce that would have helped it along. Basically, I made the wrong choice. Should have gone for the filet mignon!

For dessert you each get your own dessert plates that is a trio of desserts. These include Almond Macaron (with Lemon Jam and Raspberries), White Chocolate “Chip” Cup (with Grey Stuff and Crisp Pearls) and a Dark Chocolate Truffle (filled with Dark Chocolate Grand Marnier Ganache): 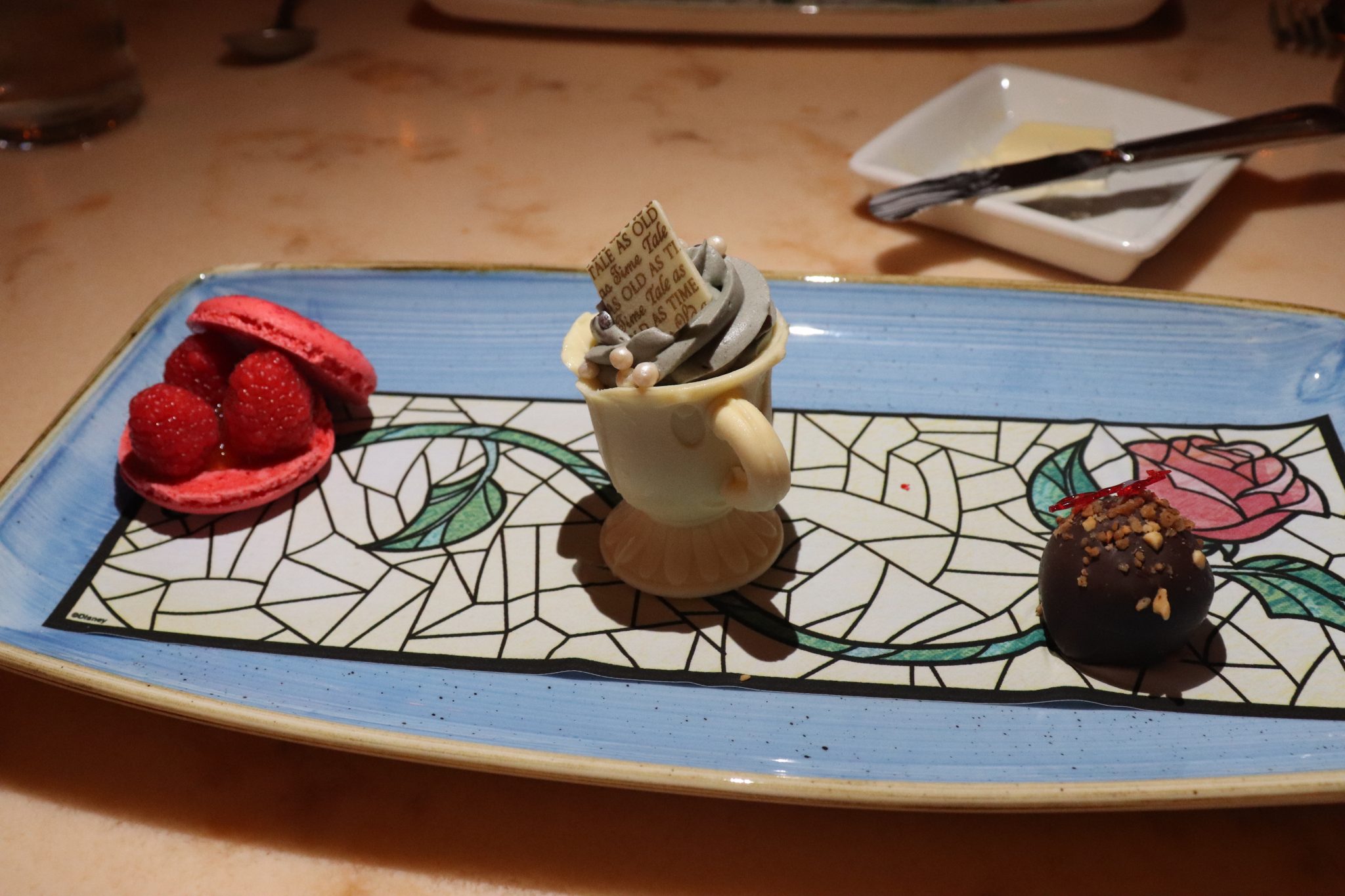 So, I loved the dessert plate! All three of the items were excellent. I love macarons and you can’t go wrong with the combo of lemon and raspberry. I hadn’t read the description of what was in the chocolate truffle before I ate it, but I was blown away with deliciousness. Reading now what it was that makes a lot of sense becauese I’m a huge Grand Marnier fan! And the grey stuff is always good, though I just ate it out of the cup and didn’t eat Chip himself because I don’t like white chocolate. Our sever even pointed out that the paper stained glass on the bottom was edible as well. It’s a gorgeous plate and the desserts are really great. I think the chocolate truffle was my favorite.

After dinner it’s time to meet your host – the Beast! Once your meal is done you go into a separate area and have the chance to meet the Beast and have your photo with him. 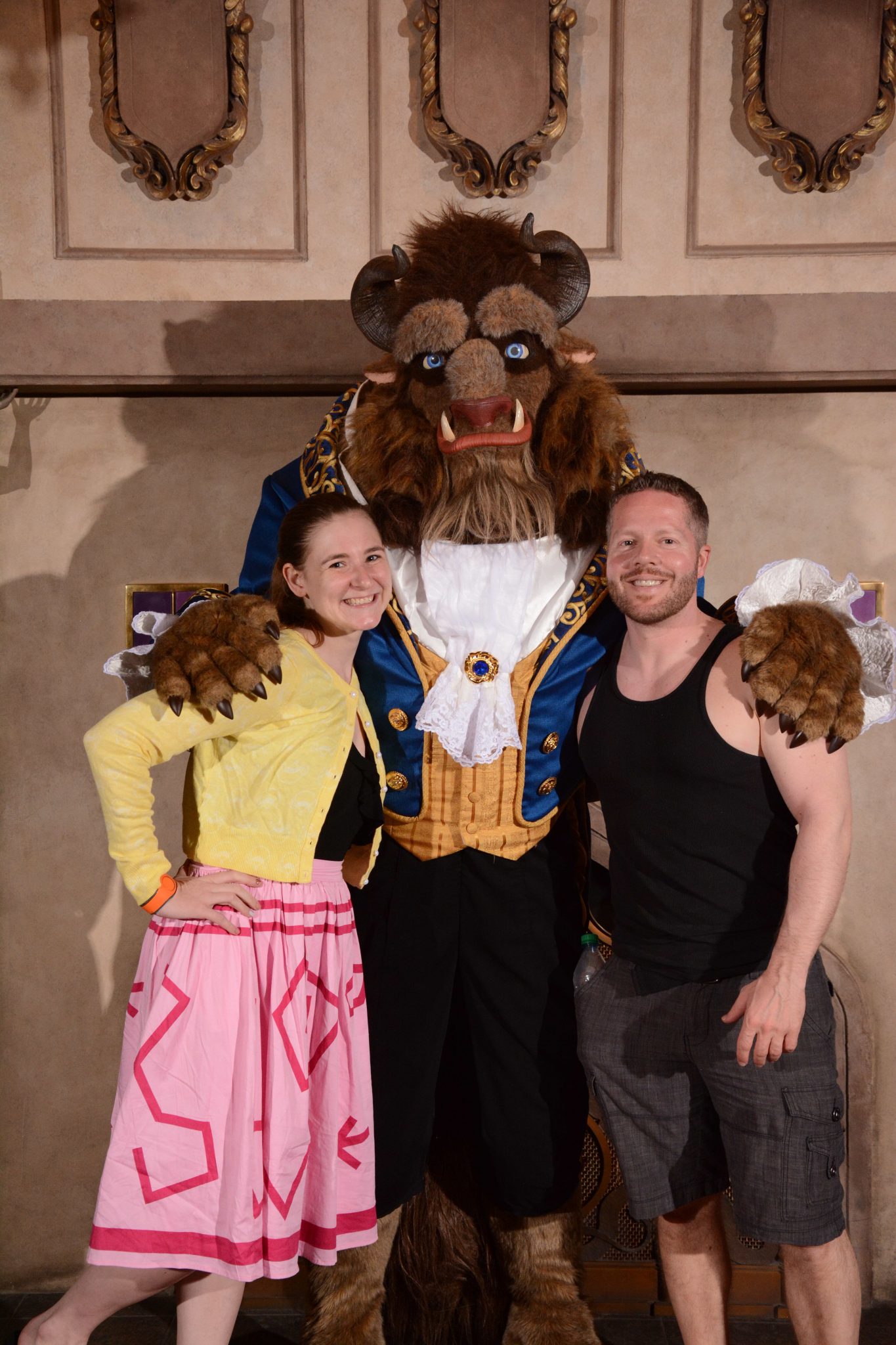 So, is Be our Guest still worth it with the higher prices? I have mixed feelings on this one. As a Beauty and the Beast fan I just love being in there. But I could get that same feeling at breakfast or lunch. The appetizers were really good and the desserts were amazing. But the main part of the meal is the entree, and mine fell flat. I would be willing to try the menu again here but would definitely order something else. And really, at the price they’re charging all the entrees should be great.

Have you tried the new menu at Be our Guest? What are your thoughts on it?