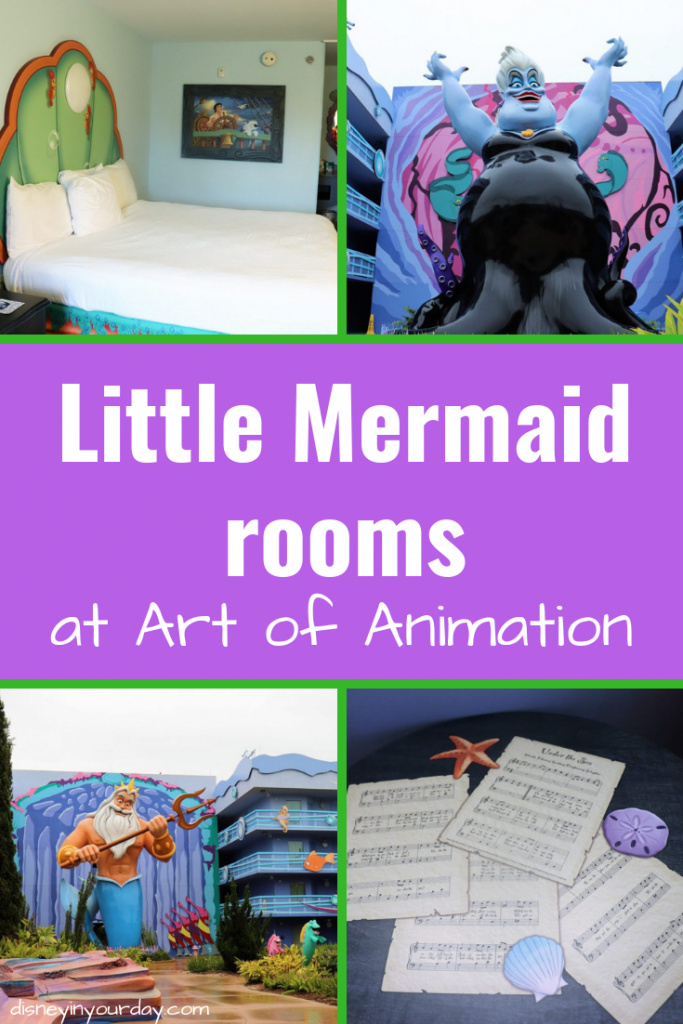 I’ve stayed at Art of Animation in the family suites twice before: once in the Lion King section, and once in the Cars section. It’s a great resort and the suites are really nice – great for groups or big families.  When Jason and I drove up to Orlando after our cruise from Miami we only had one night in Disney World, and we decided to book a Little Mermaid room at Art of Animation. 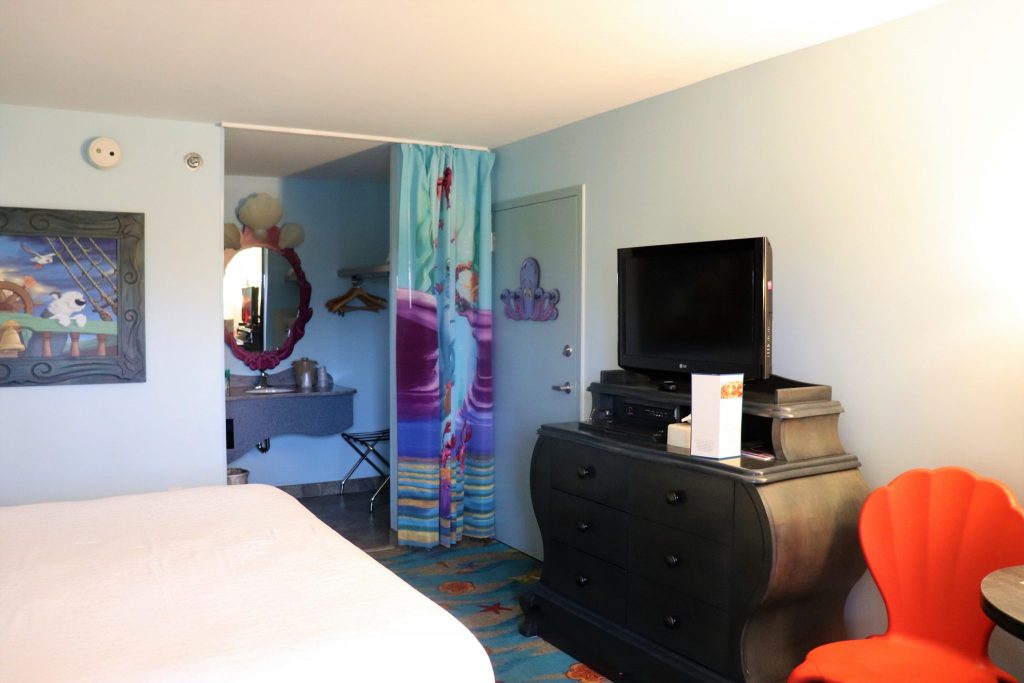 Unlike all of the other sections at Art of Animation, which are suites that sleep up to 6, The Little Mermaid rooms are standard rooms that sleep up to 4.  Like the other values, they are relatively small rooms at about 260 square feet. They contain 2 full beds, a table and 2 chairs, and a dresser/television. You also have your standard bathroom with the sink located outside. It has a mini fridge and a safe but no microwave in the room.

For a couple or a family with young kids you’ll probably be fine in a room like this (and this goes for pretty much all of the value standard rooms). However, if you have 4 adults or teenage children I suspect you’ll find it a bit cramped. Especially in terms of sleeping with the 2 full beds rather than queen size beds, like at the moderate resorts. 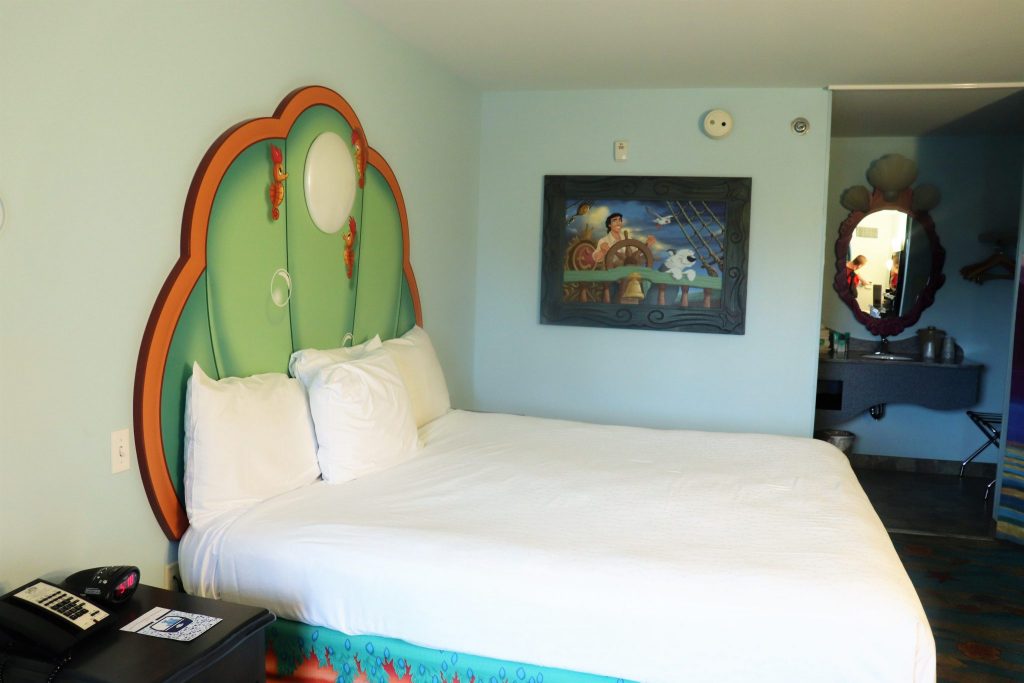 Little Mermaid fans will adore all of the details and themeing in these rooms, and let’s be honest – if you’ve got a Little Mermaid fan in the family, that’s probably why you’re staying here.  The carpet is really fun, with a wave pattern and details like seashells and fish.  The two chairs look a bit like clam shells, but my favorite part is the table. It has the sheet music for Under the Sea printed on it!

The beds have a headboard that also looks like a clamshell, and they have one large, round light in the center of it to look like a pearl! You’ll find lots of other fun Little Mermaid touches around the room, including some artwork on the walls, around the mirror, etc.

The bathroom was another really well themed area, despite being so small. The inside of the shower is amazing! The tiles are painted to look like Ariel’s collection of objects under the sea – all of her whozit’s and whatzits are on display. And then the shower curtain is Ariel herself. 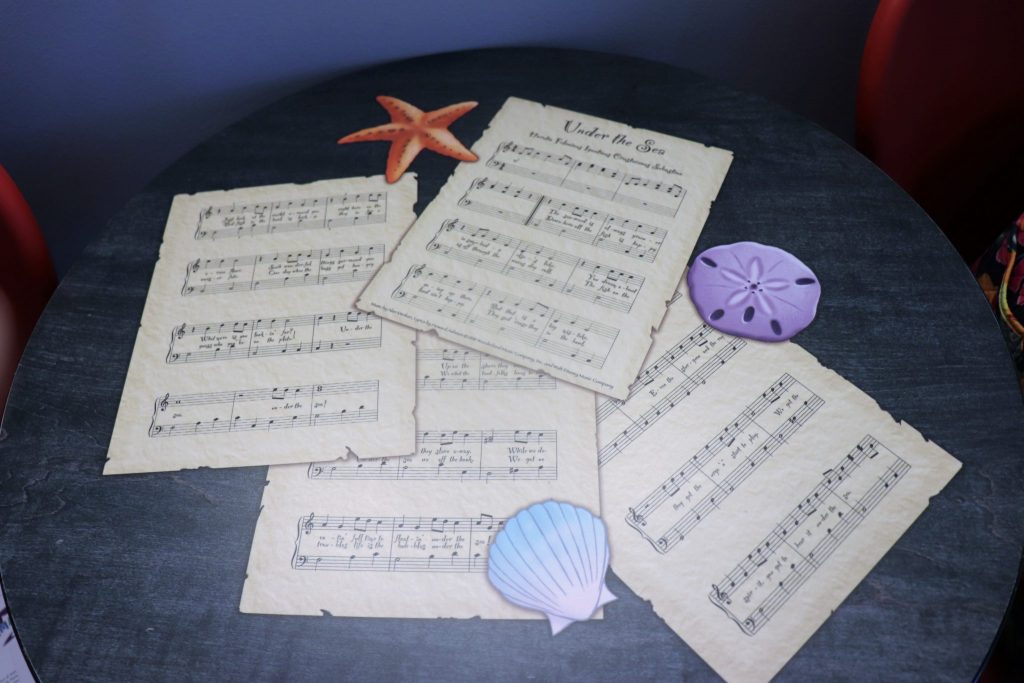 The location of the Little Mermaid rooms is probably the biggest downfall of the resort.  It is the furthest building from the main building, and it’s not just a short distance – it’s a pretty long hike. I was amazed by how long it took to walk from the Little Mermaid to the hotel lobby. I actually toured the resort a few years ago as part of a travel agent group and a number of agents commented on how far you had to walk to get to both the buses and the food. On this trip Jason and I had a rental car so it wasn’t much of an issue. We could park right near our building and drive to the parks, so if you have a car that’s an option, though keep in mind you have to pay for parking. 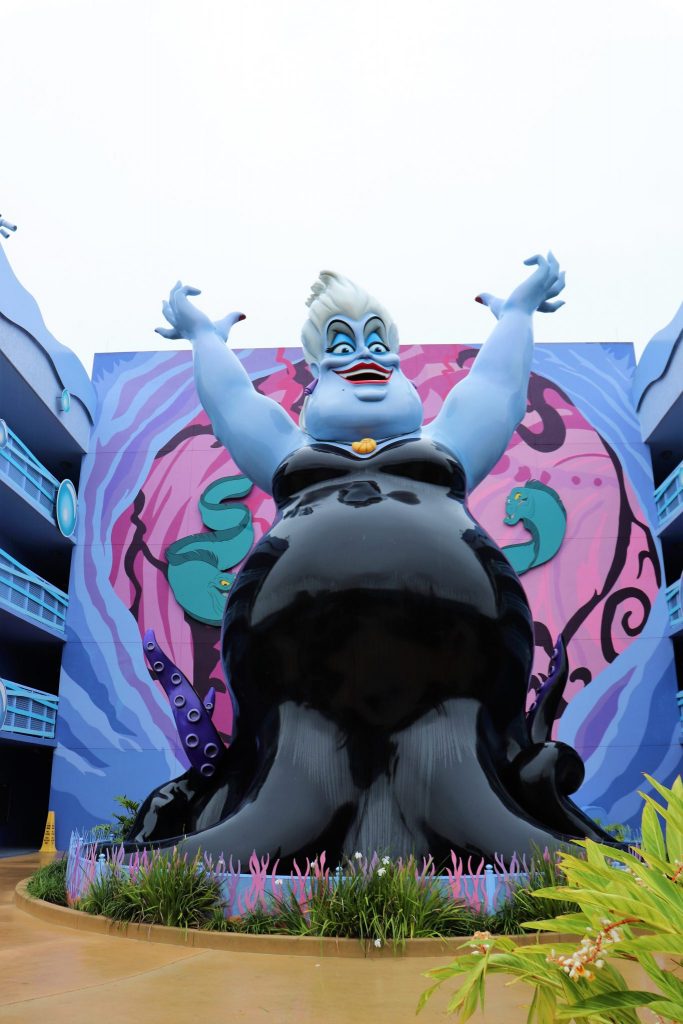 Though it’s considered a value resort, it’s on the higher price end for values. The Little Mermaid rooms have proven to be super popular, and as a result they not only cost more than a standard room at Pop Century or the All-Stars, they are also never discounted. Any deal or discount that Disney offers always has the Little Mermaid rooms excluded. On a Saturday night in May we paid $200 for the night. You can generally expect these rooms to be about $30-50 more per night than the other value standard rooms, so keep that in mind if you’re looking for the best bargain. If you’re looking for themeing and the best overall amenities, you might find these rooms are worth the price. 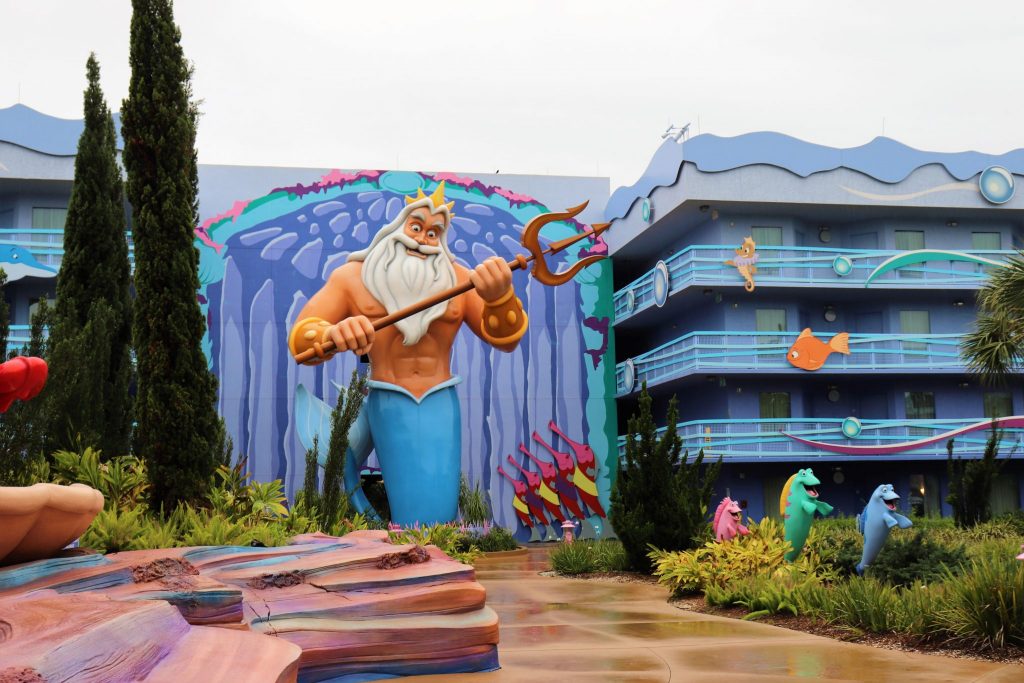 Art of Animation is a fun resort with a lot of nice amenities, but you are going to pay more for it than other value resorts.  The Little Mermaid rooms have awesome themeing, but you’ll never find them discounted. Since that’s not my priority I probably won’t stay here again anytime soon, but I think some people will find a lot of value in the fun ambiance of the room and the resort, as well as the great food court and pool that you have at Art of Animation.