You are here: Home / Disney Cruise Line / Animator’s Palate on the Disney Magic 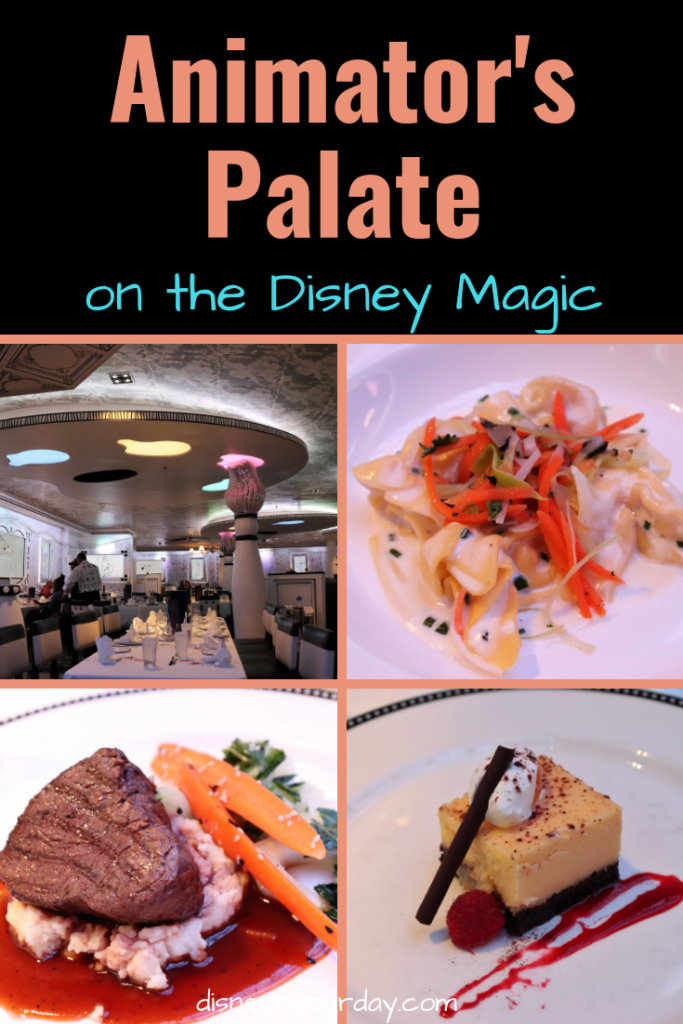 Our first night on the Disney Magic we were assigned to dine at Animator’s Palate. I was excited for this restaurant – they have a version of Animator’s Palate on every Disney Cruise ship, but they are all different in some way.  I hadn’t searched what the gimmick at this one was, so I knew I would be surprised (skip the next paragraph if you don’t want to know!). 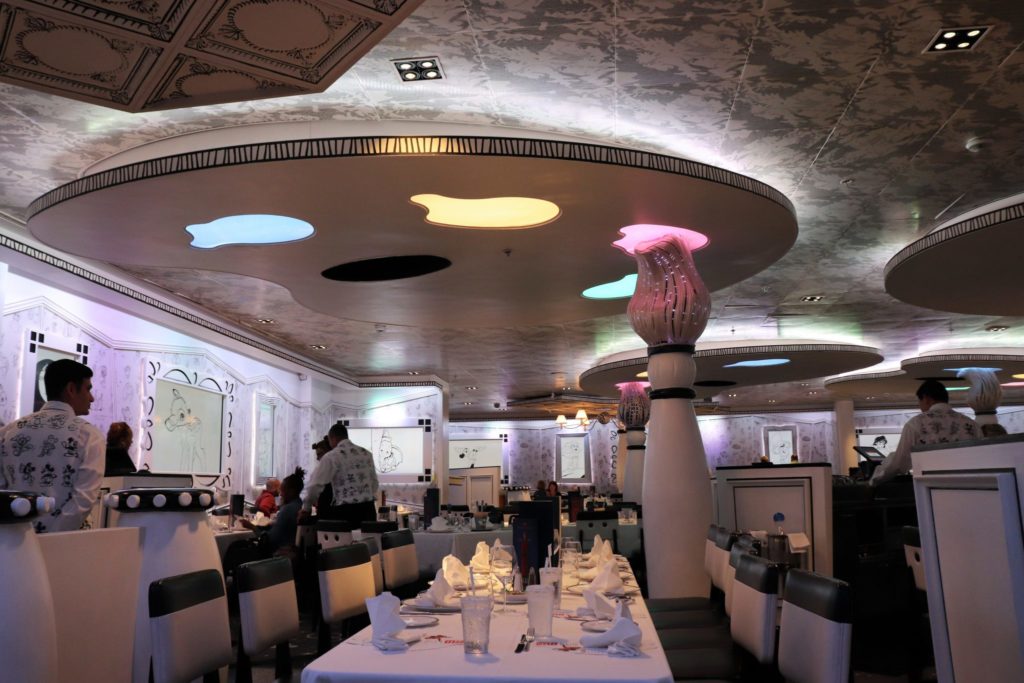 When we had been on the Dream, Animator’s Palate had a number of screens and Crush from Finding Nemo appeared on them and talked/interacted with people at their tables.  On the Magic there were screens, but they did something different. They slowly began to draw sketches of Disney characters, and it was a lot of fun to look around the room and try to guess what characters were appearing. Throughout the night they started adding color to the drawings until finally there was a short little show before dinner where the sketches were animated and brought to life.  Even the servers changed outfits from black and white to color. 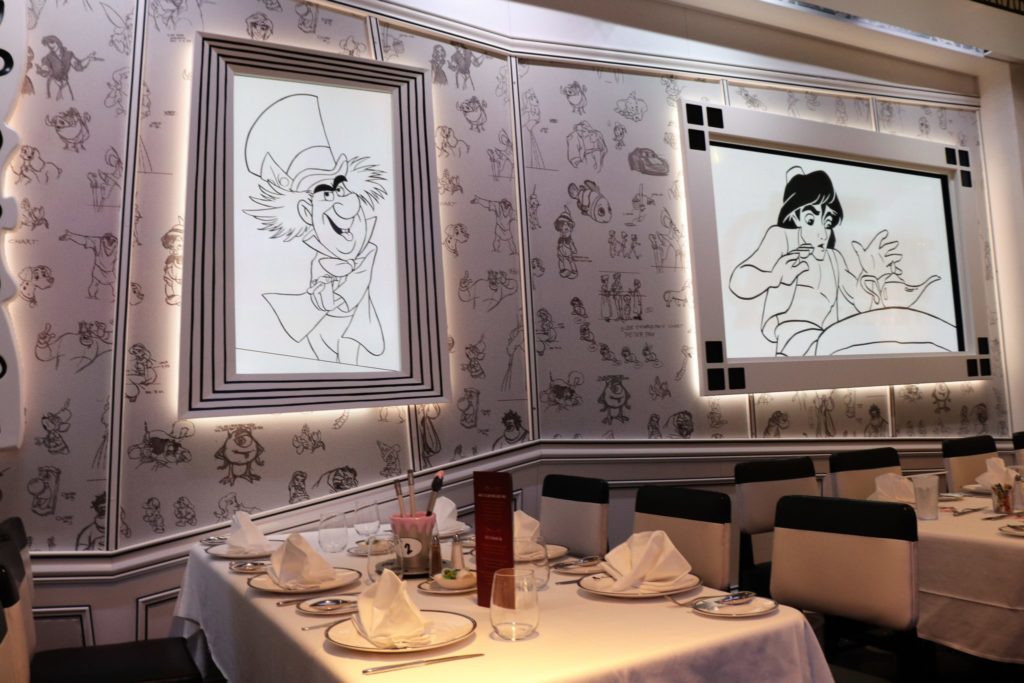 Though the restaurant itself was different than the Dream, the menu was basically the same. I got the same drink I had ordered on the Dream since I had liked it so much: that was Blueberrilicious (tequila, fresh blueberries, passion fruit juice, orange flavor liquor, and freshly squeezed lime juice): 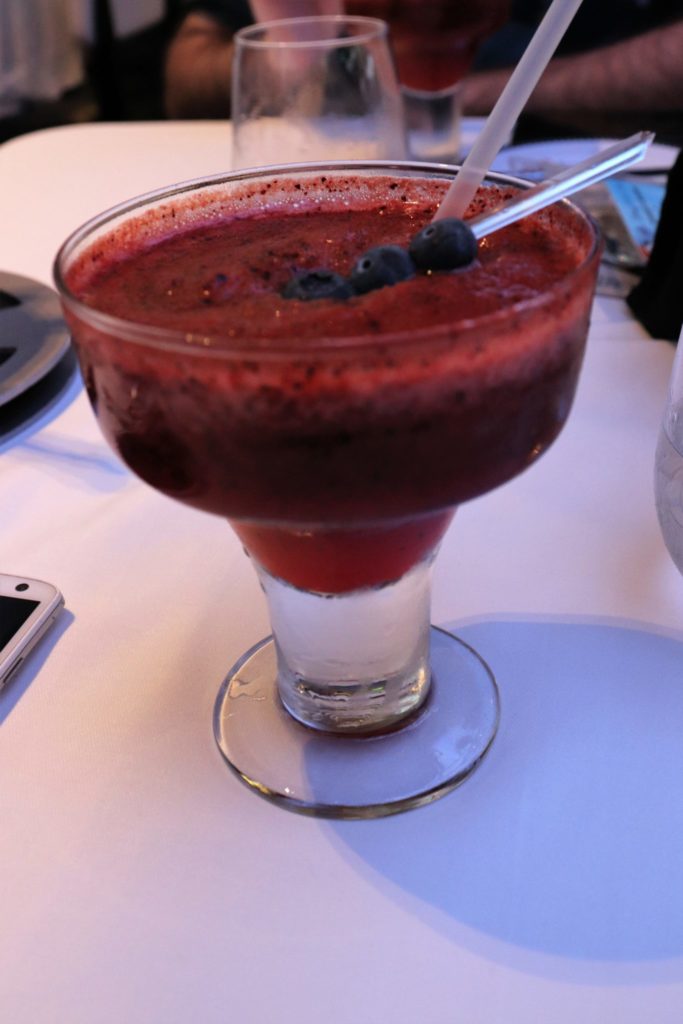 This was good, though perhaps not quite as good as I remembered on the Dream.  The tequila was pretty strong and I could have used more blueberry flavor, but I still really enjoyed it!

Jason went with a different drink: 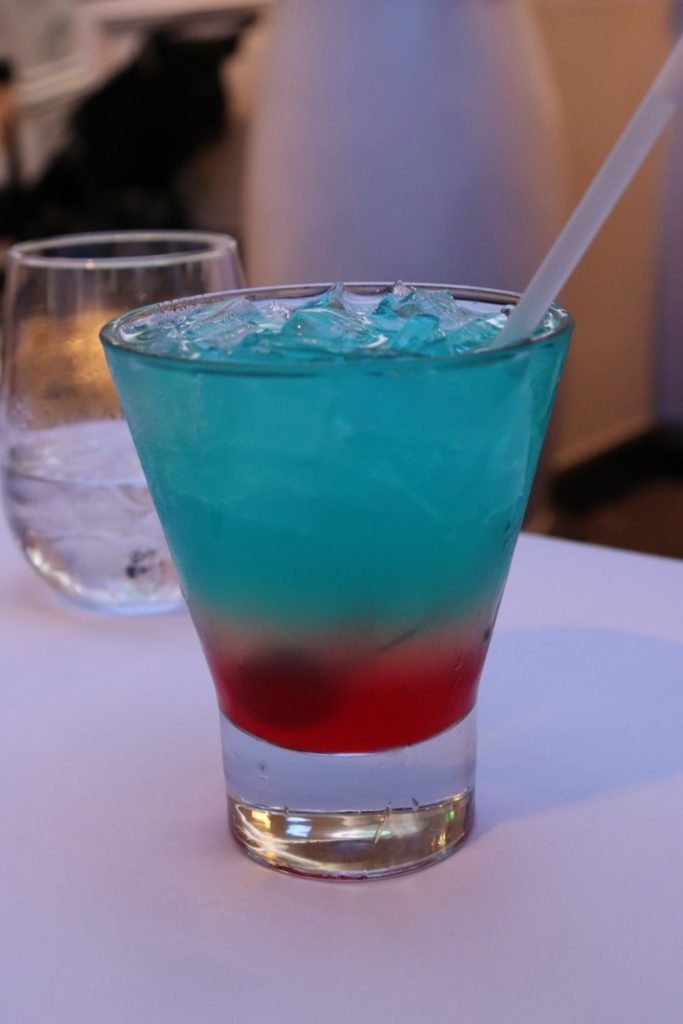 I’m going to label this as a “blogging fail” because I don’t remember the name of this cocktail.  I could not seem to find it even with the help of Google! So if you recognize it or know what it is, please share! Otherwise I recall it was sweet and fruity and Jason really enjoyed it because he loves those sorts of drinks.

Appetizers were up first, of course! Our friend had the Tomato Tarte (with glazed goat cheese and shaved radish): 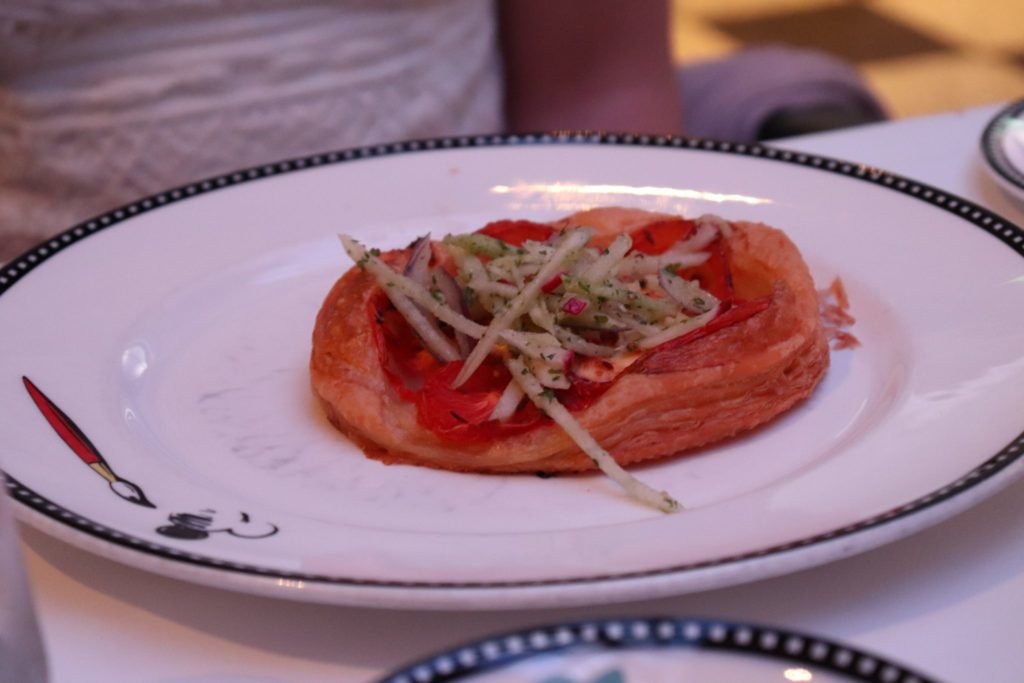 I tried a bite of this and thought it was pretty good. Nice and fresh, and even better than I expected it would be. 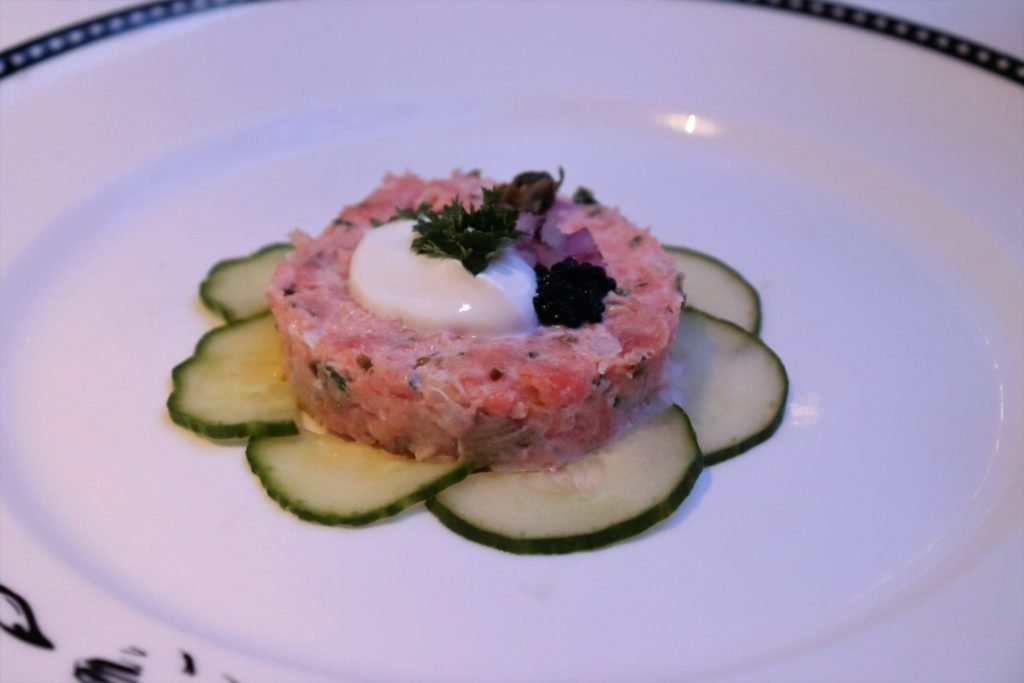 I was not surprised that Jason went for this one, because he’s a big fan of smoked salmon. I also snagged a bite of this too and thought it was pretty flavorful, even though I’m not huge on smoked salmon.

My appetizer was the Black Truffle Pasta Purseittes (pasta purses filled with truffle-scented cheese and coated with a delicate champagne sauce): 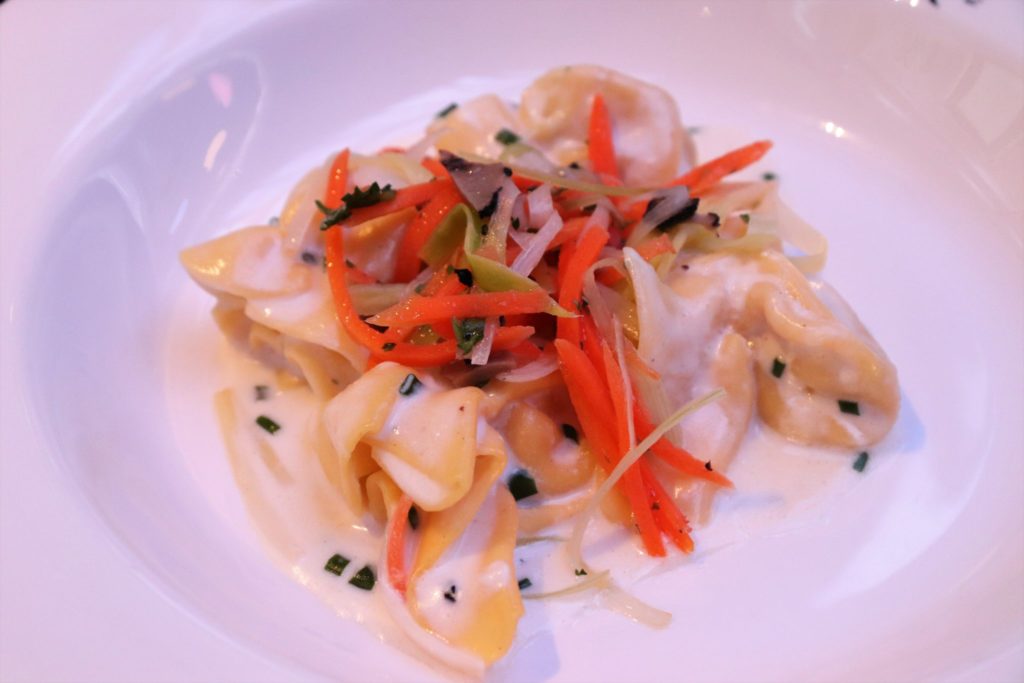 This was excellent. The sauce was really good and balanced the stronger flavor of truffle (which I love). I could totally have gone for a big bowl of this as an entree, especially because none of the entrees here had me super excited.

I am not used to ordering 4 courses at every meal. Usually an appetizer, entree, and dessert would be a huge splurge – no need to add in a salad or soup too! But on the cruise, when everything is included anyway, they really want you to go big and go for all 4 courses. And we’re on vacation, so why not? Jason and I both got the Baked Potato and Cheddar Cheese Soup (with bacon bits and chives): 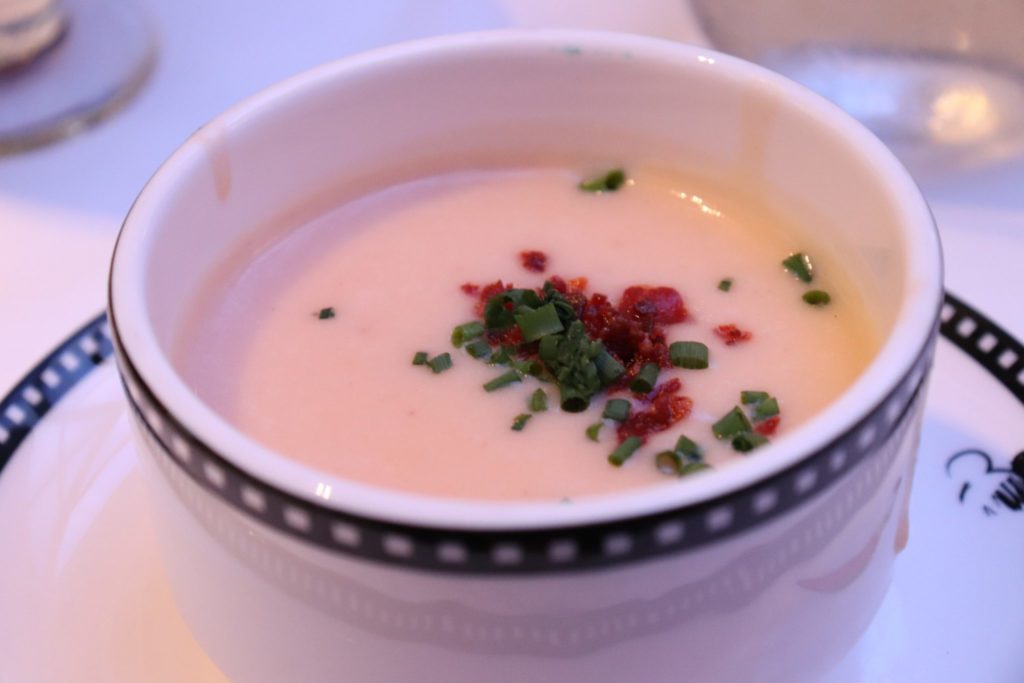 This was a decent potato soup that did the trick, though honestly I think the one you can get at Panera is better. I like the chunks of potato you find there, while this was very well pureed so the consistency was the same throughout.  Good, but nothing special.

Our friend got the Chicken and walnut salad (craisins, red onions, and a cranberry dressing): 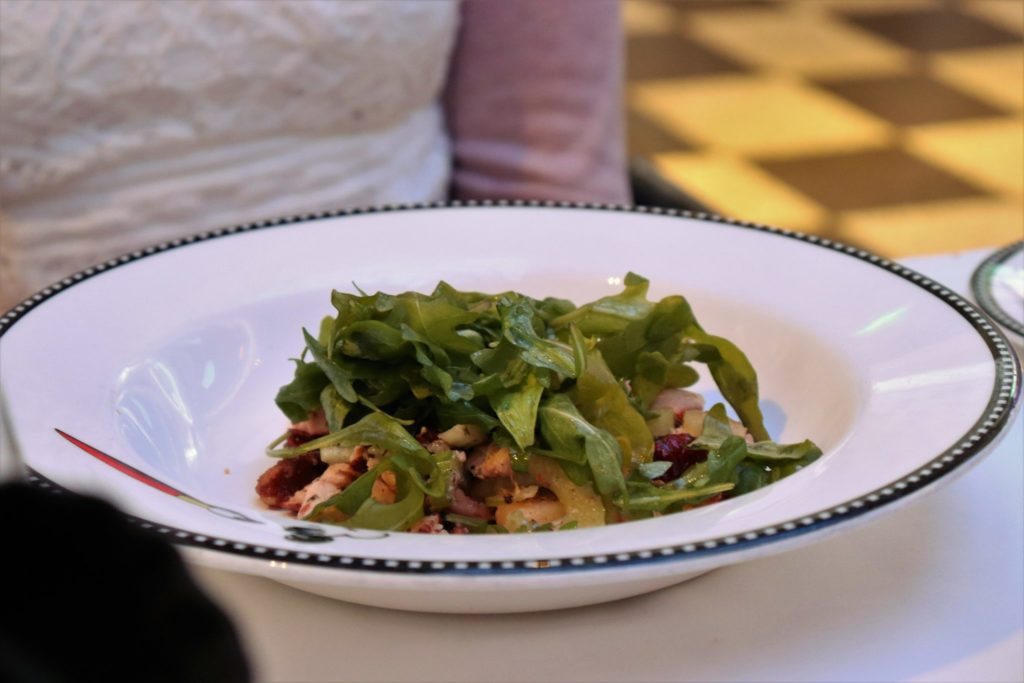 This was a light, good salad, and probably a better choice than a heavier soup if you’re not used to eating 4 courses for dinner! 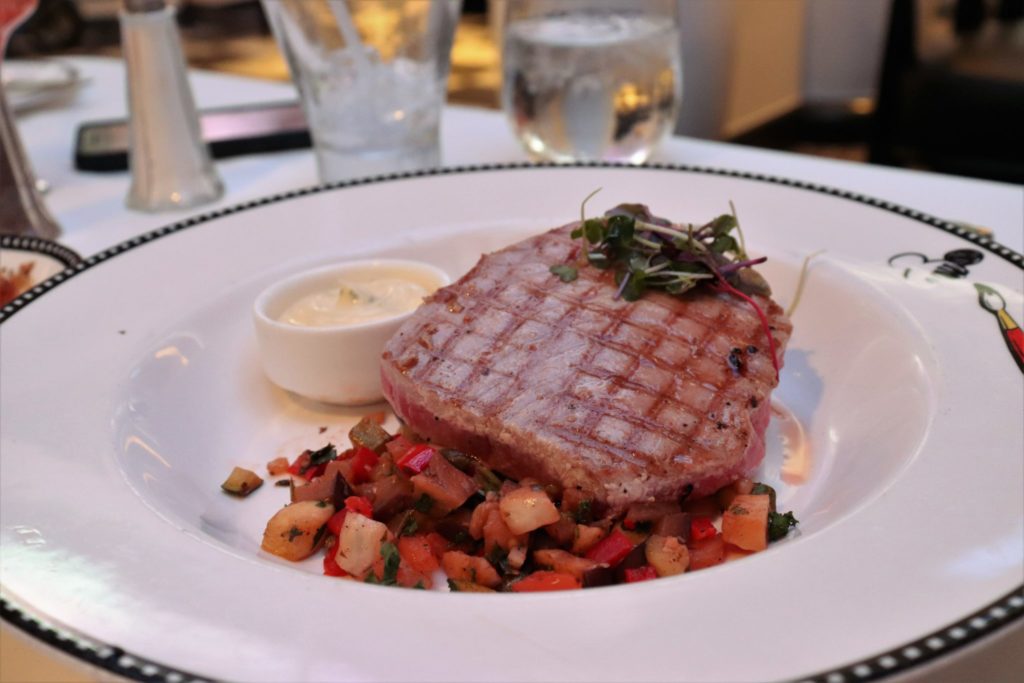 I know he was really excited about this meal and thought it was a really good. The tuna steak was huge, and it was cooked rare just the way he likes it. They asked how he wanted it done, of course, but a lot of places overcook tuna and then it’s just nowhere near as good. So he was definitely pleased with this one.

Our friend had the Herb-Crusted Pork Chop (pork chop brushed with dijon mustard and crusted with herbed breadcrumbs served with a sun-dried toamato risotto and a borolo wine sauce): 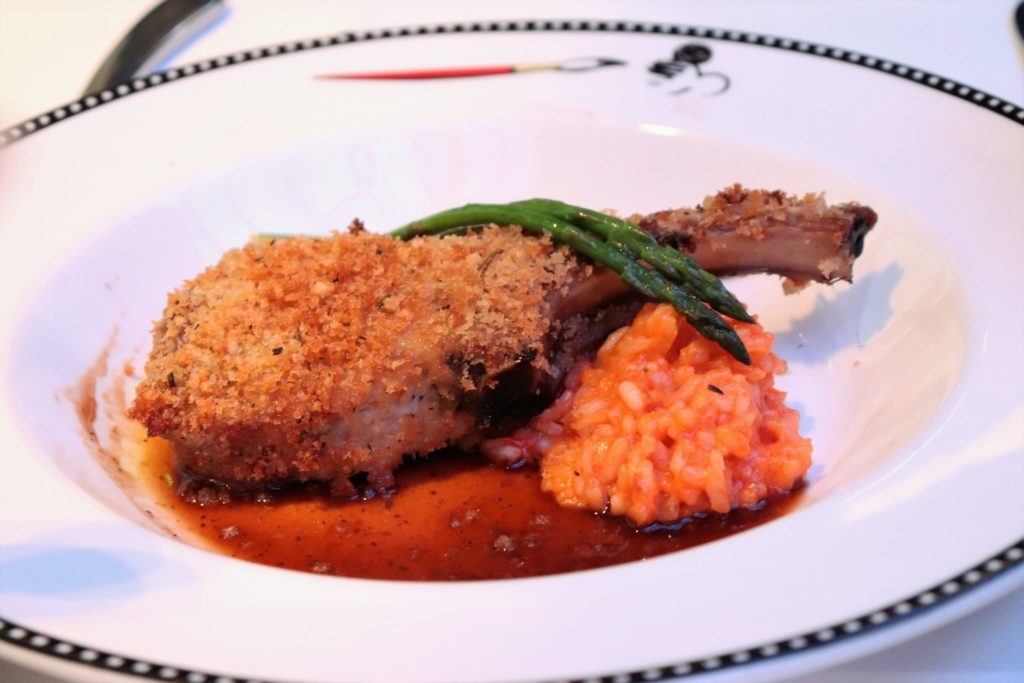 I didn’t get the chance to sample this one (as I was already getting full from my own meal and trying to save room for dessert too!) but it certainly looked good. The risotto looked like a tasty accompaniment.

For dinner I had the Ginger-Teriyaki dusted Angus Beef Tenderloin (served on wasabi mashed potatoes with bok choy and a tamarind barbecue reduction): 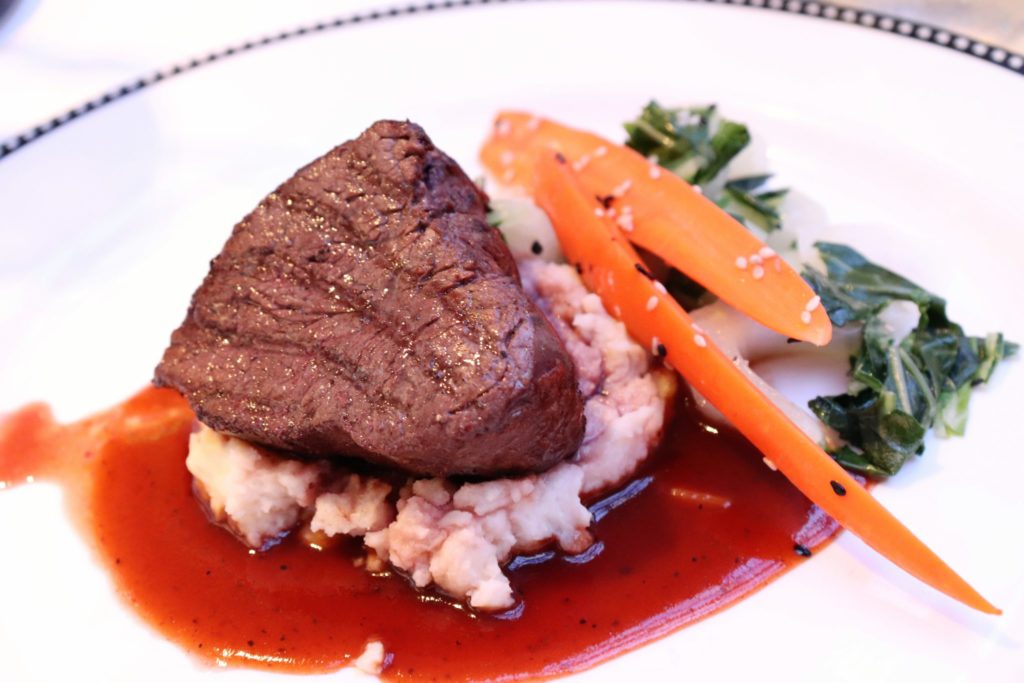 I had mentioned that nothing on the entree menu was calling to me in particular, but I went with this one. I’m more of a fish or chicken person than beef, though I do enjoy a good beef dish once in awhile. I have to say this was better than I expected and I thoroughly enjoyed it. There were lots of great flavors, and can I just say – wasabi mashed potatoes. So, so good.

It’s a good thing we saved room for dessert, because they were quite tasty too!  Jason surprised me by going for the Lemon Icebox Pie (served with lemon curd and berry creme): 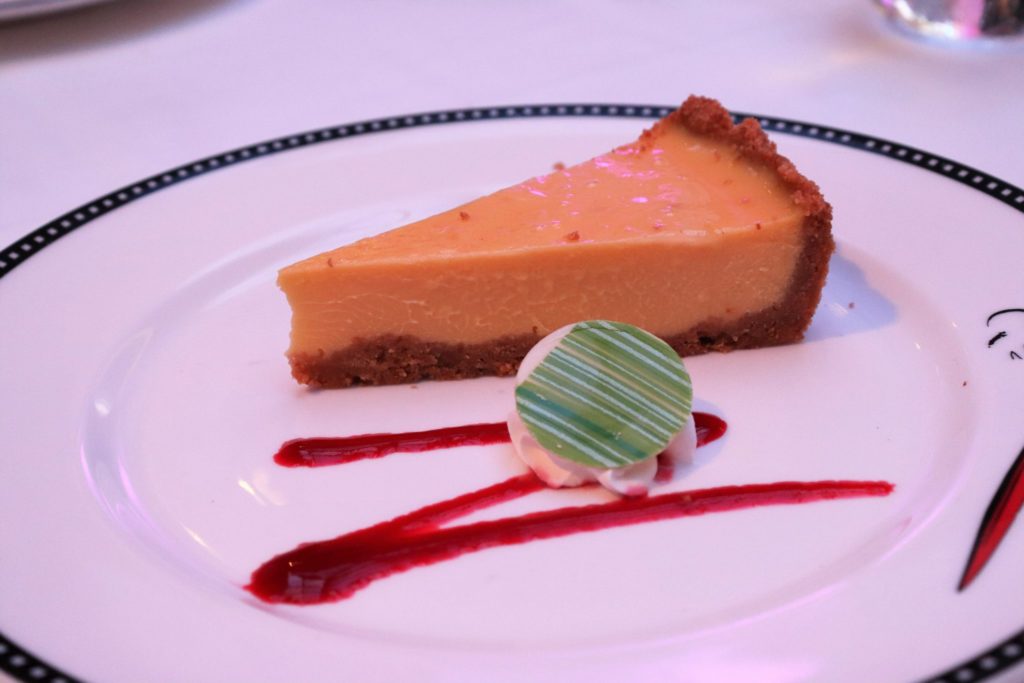 He likes fruity desserts and isn’t big on chocolate so I think he liked this even though he wasn’t able to finish it – we just had so much food!  It was similiar in texture and flavor to Key Lime pie, though obviously it was lemon instead. 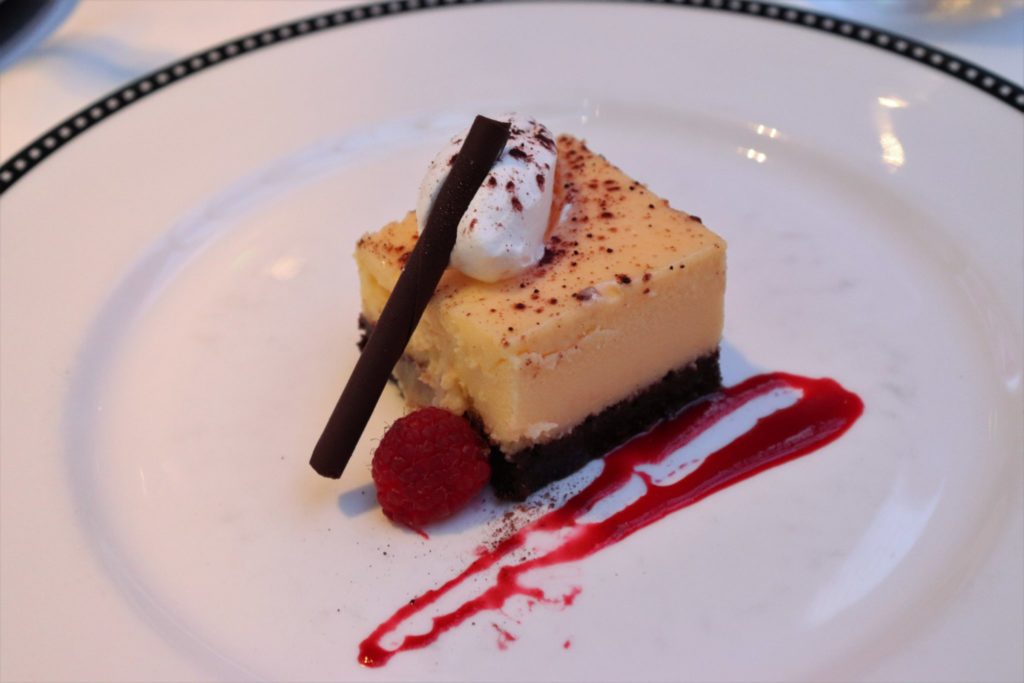 I’m not actually huge on cheesecake, but this one was very good. The chocolate base added was excellent, and I was glad the plate had a bit of raspberry sauce for added flavor.

Our friend is the big chocolate lover, and she got the Crunchy Walnut Cake (dark chocolate mousse and raspberry coulis): 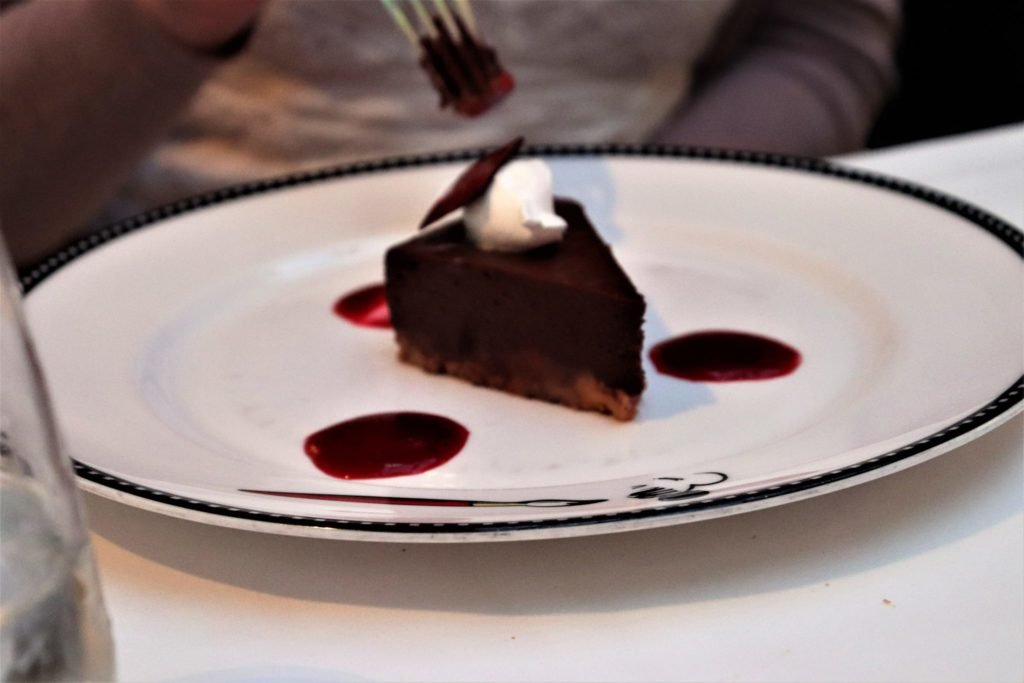 You may or may not have noticed the fork already lifting a bite out of it before I took the photo – I think it looked so good she couldn’t wait!  Very chocolatey and filling.

Because we were celebrating Jason’s birthday on this cruise, they also brought him a birthday dessert! 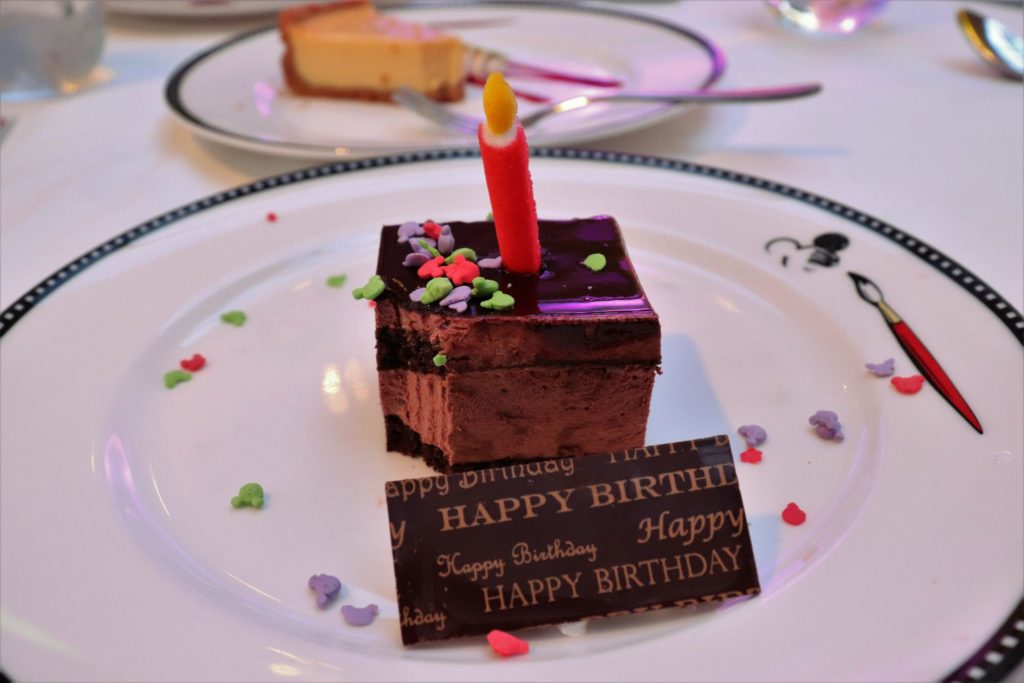 This was a chocolate cake, and we were both pretty full to eat too much of it. I think I ate more than he did because as I said above, he’s not a big chocolate person.  I can always use a little chocolate to end the meal, though!

We had a really good time at Animator’s Palate. I enjoyed the food a lot, and it’s such a fun restaurant. We spent a lot of our time at dinner playing along with the interactive elements happening in the room.  It’s something that is very uniquely Disney, and a great addition to the cruise ship! 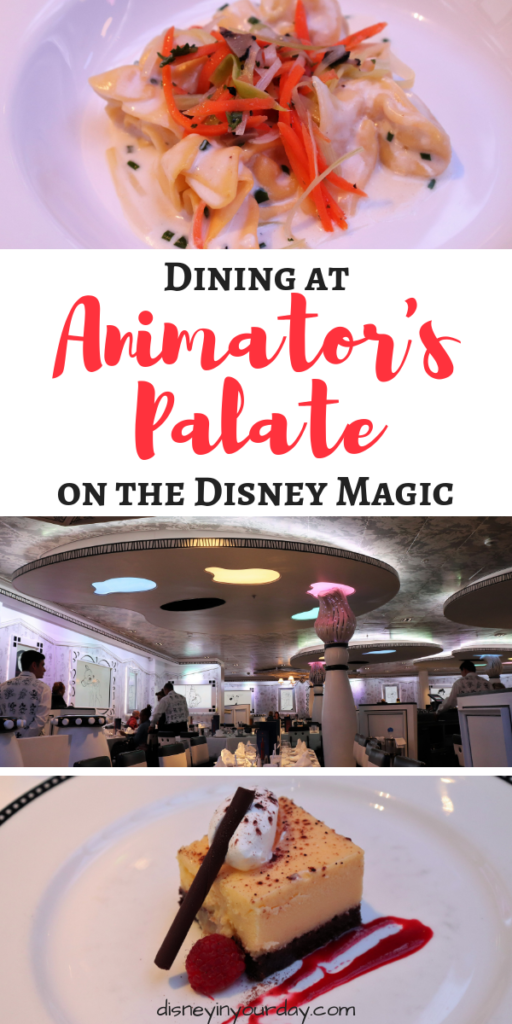 Have you been to any Animator’s Palate? What looks best to you?