You are here: Home / At Home / An Inside Out birthday party 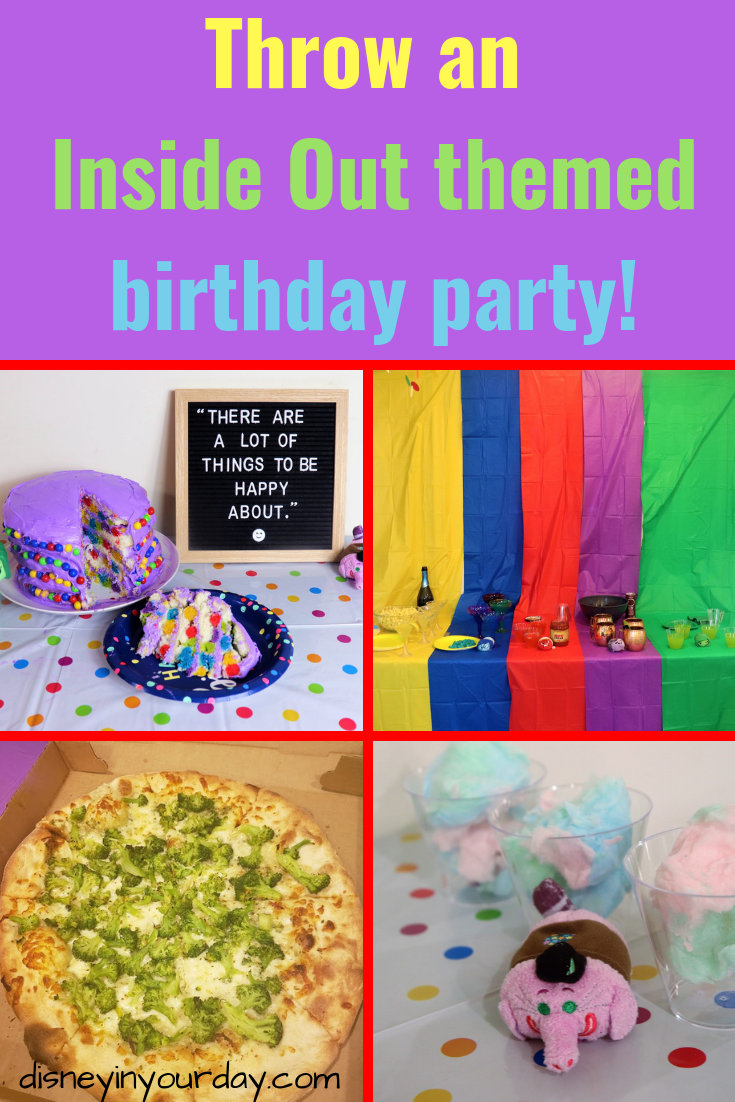 It’s April, which means it’s my birthday month – and what better way to celebrate than with an Inside Out birthday party! I’ve had the tradition for awhile of throwing a Disney themed party for myself, choosing a different movie each year. In the past we’ve done Tangled, Princess and the Frog, Beauty and the Beast, and Wreck-It Ralph.  It usually involves decorations, themed food, especially themed drinks, and a showing of the movie.  This year I had to go with my favorite Pixar movie, Inside Out! 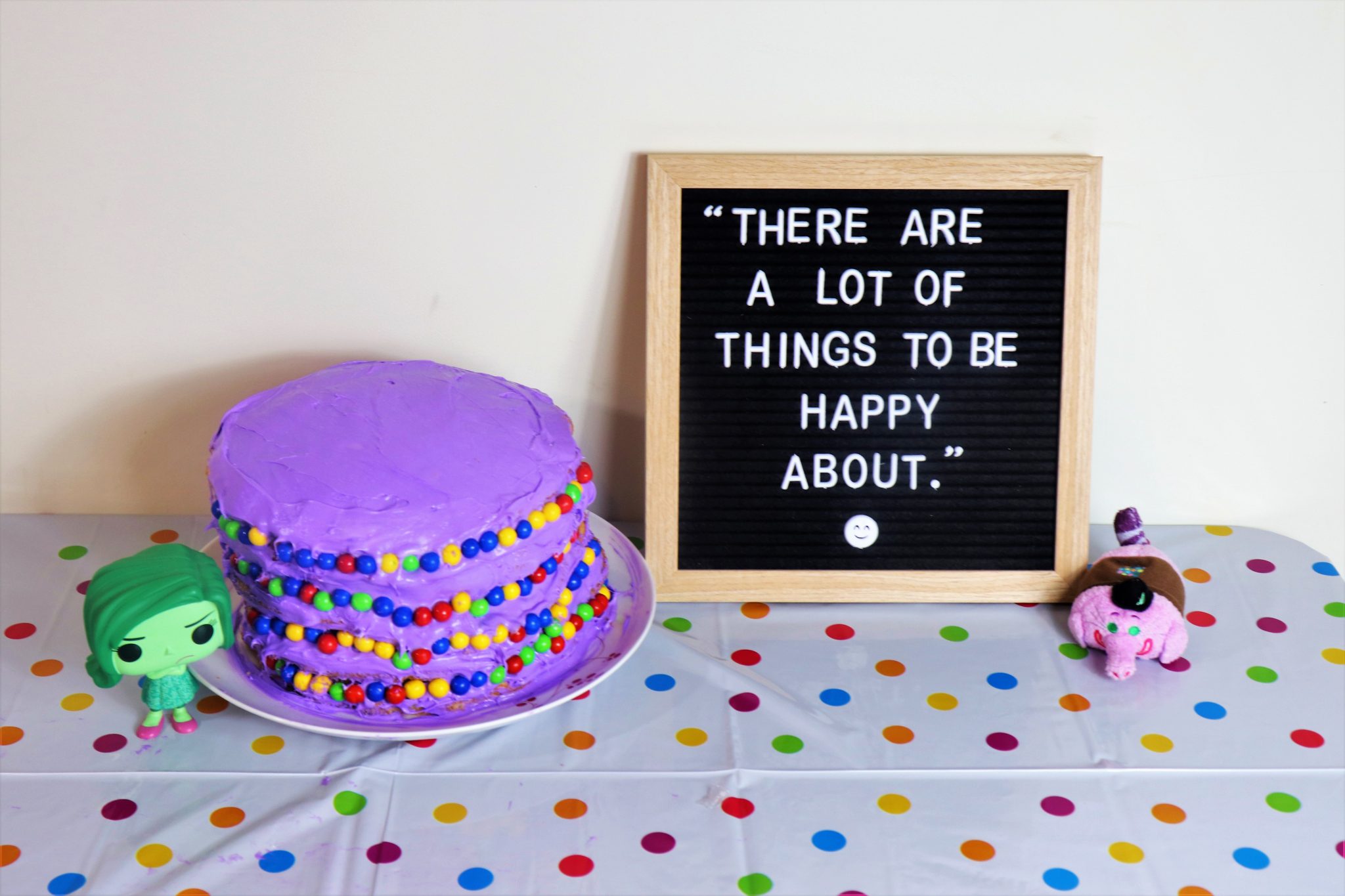 Inside Out was a fun and easy theme to do, because you can get away with doing a lot just with rainbow colors.  Because the memory orbs are small circles anything with polka dots works really well. I got this polka dot rainbow table cloth for the dessert table.  I had also recently been gifted a felt letter board, so I chose an Inside Out quote to put on it and use to decorate.  Finally, I had all of the Inside Out tsum tsums and a Pop Vinyl of Disgust, so I used those on a few different tables throughout the basement. 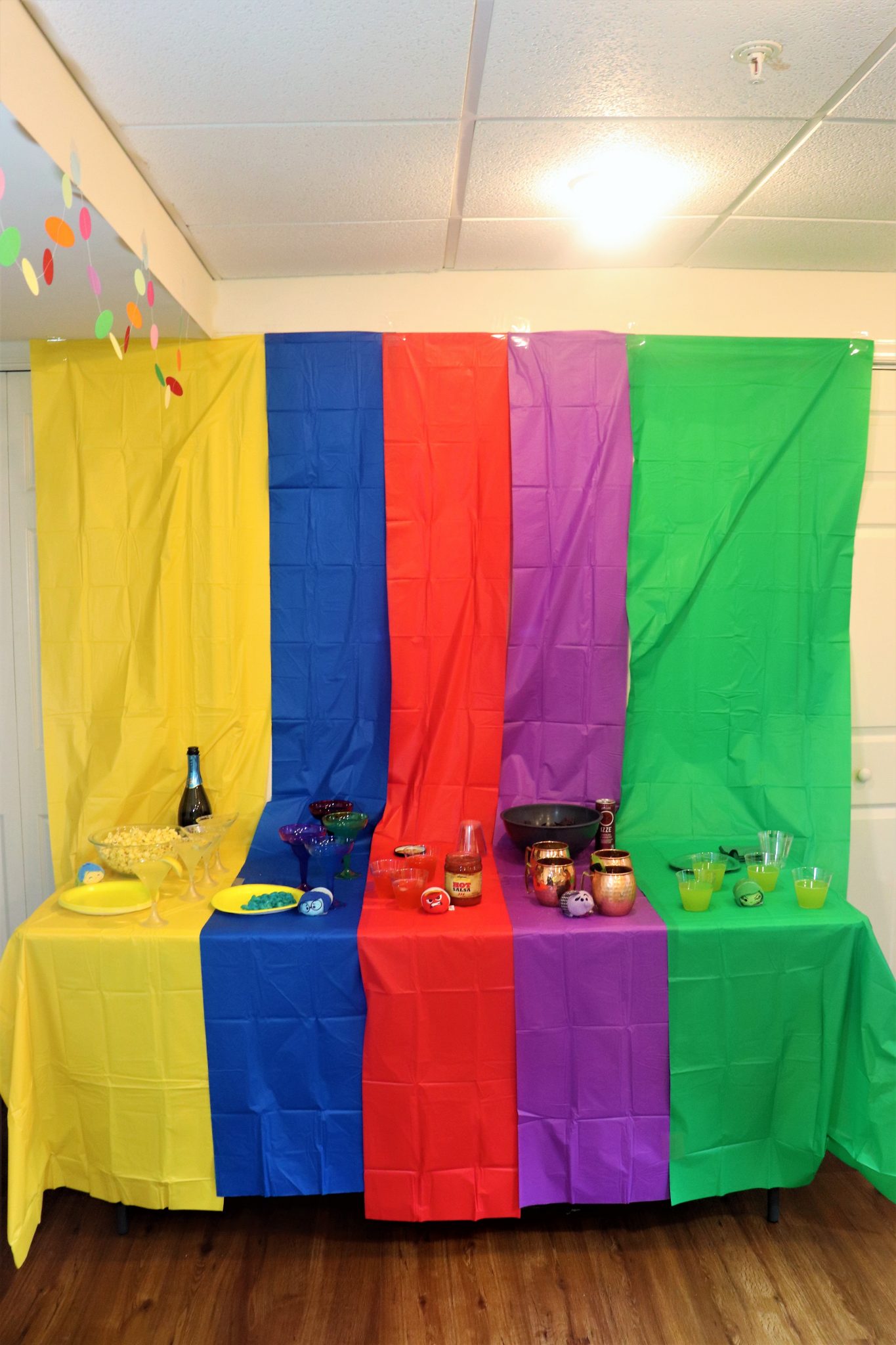 For our main food table I wanted to divide it in sections by color, because I had colored food and drink items to go with each of the emotions. I got a table cloth in each color and hung them so they draped down the wall and onto the table. 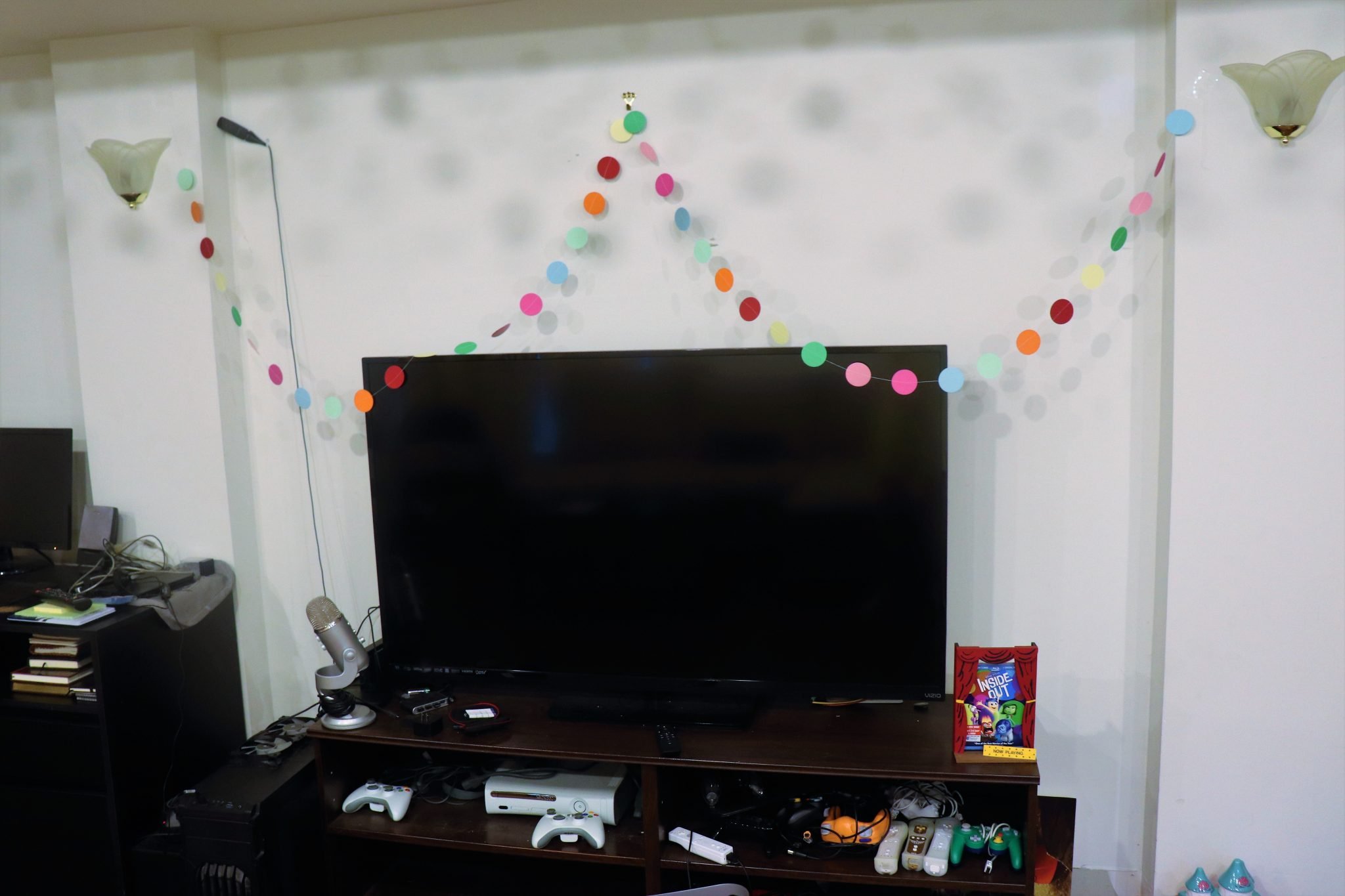 The last major decor item that I found was these fun rainbow polka dot garlands. I hung them all around the basement, but there’s a lot that you could do with them. For $10 I think you got 7 strands and they were pretty long – I didn’t even use them all.  But I think they added a lot. 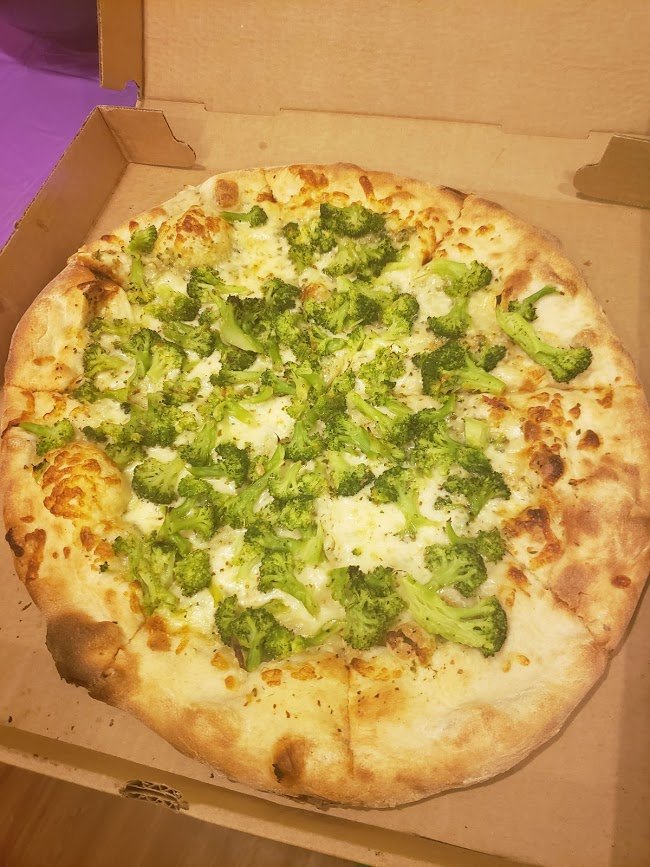 I kept it fairly simple with food but I did want to go with the theme and provide a food item for each of the 5 colors. The most obvious food? Broccoli pizza, of course! I used this for Disgust, and while she might not be a fan I actually loved it (we got a few plain and pepperoni pizzas for the non-broccoli fans too!). 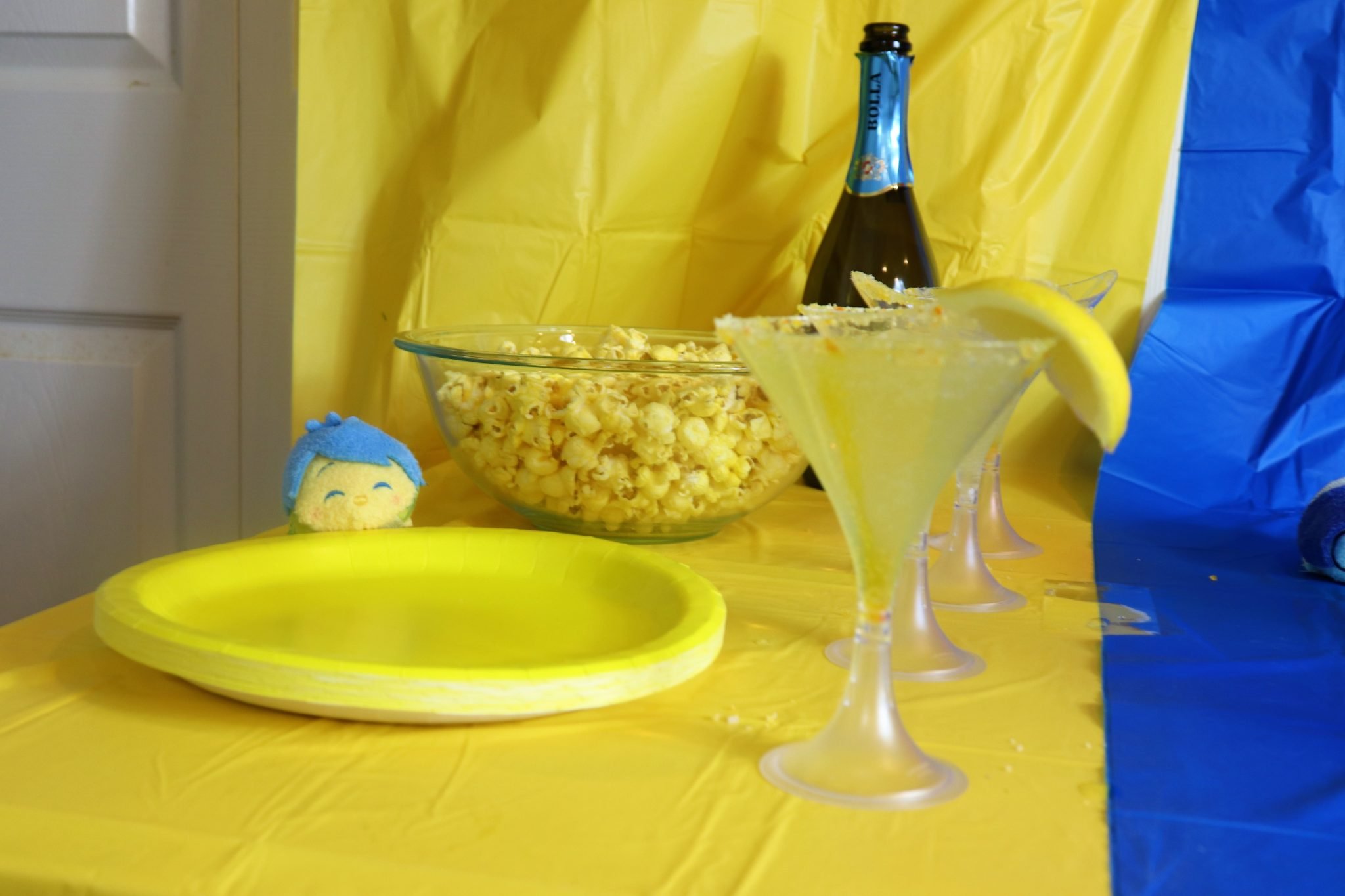 We were going to be showing the movie, and what better way to do that than with popcorn? Joy’s food choice was easy – yellow buttered popcorn worked well and was a big hit. 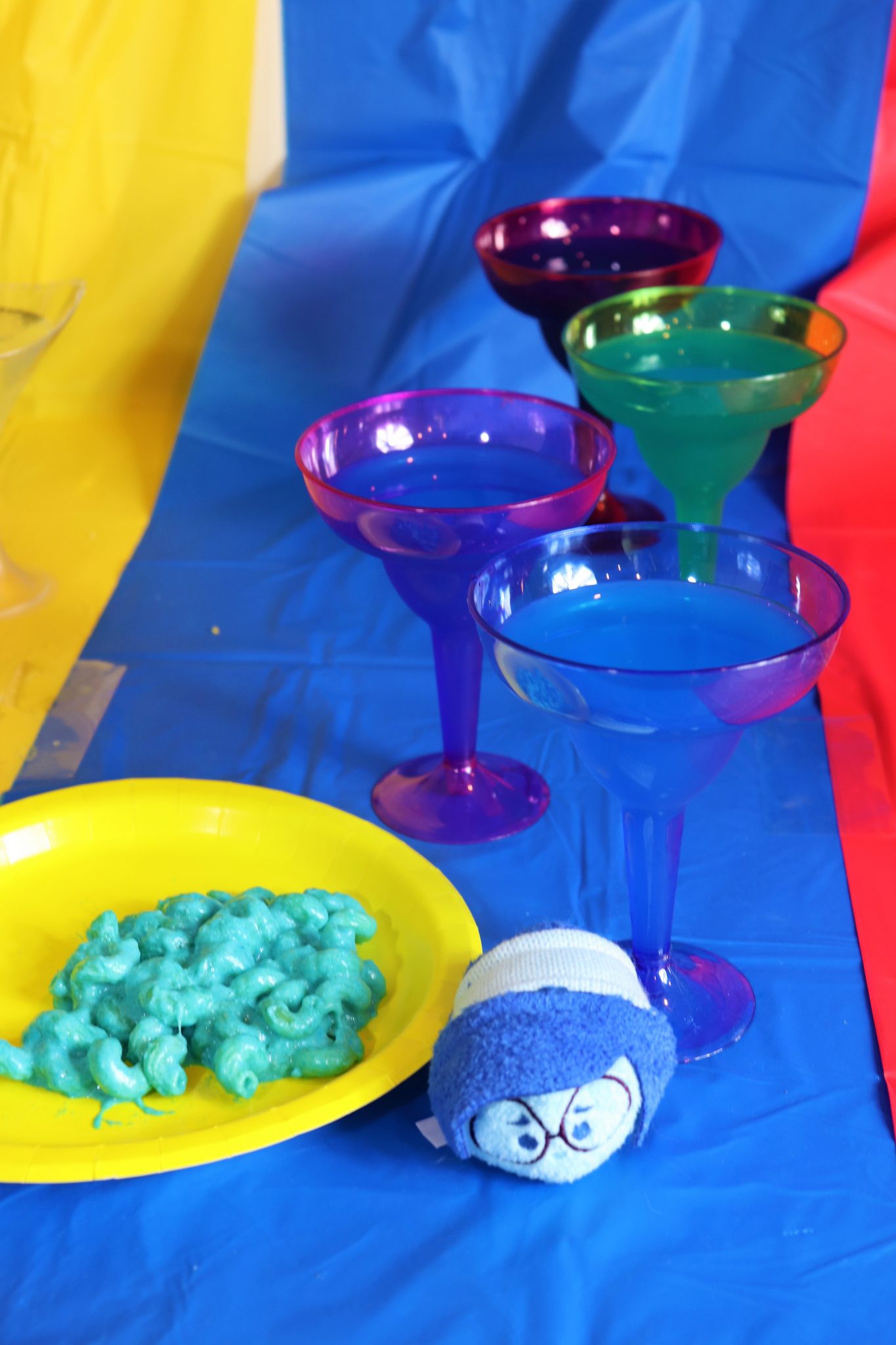 Blue was a little tougher. I wanted to have something that was a little more substantial and not just a snack besides pizza, so I decided to do crockpot mac and cheese. Turns out that if you use white cheddar and just add food coloring you can make it any color you want! And since she is Sadness, it seemed fitting to do a comfort food.  When you’re down, a little blue mac and cheese might just be what you need. 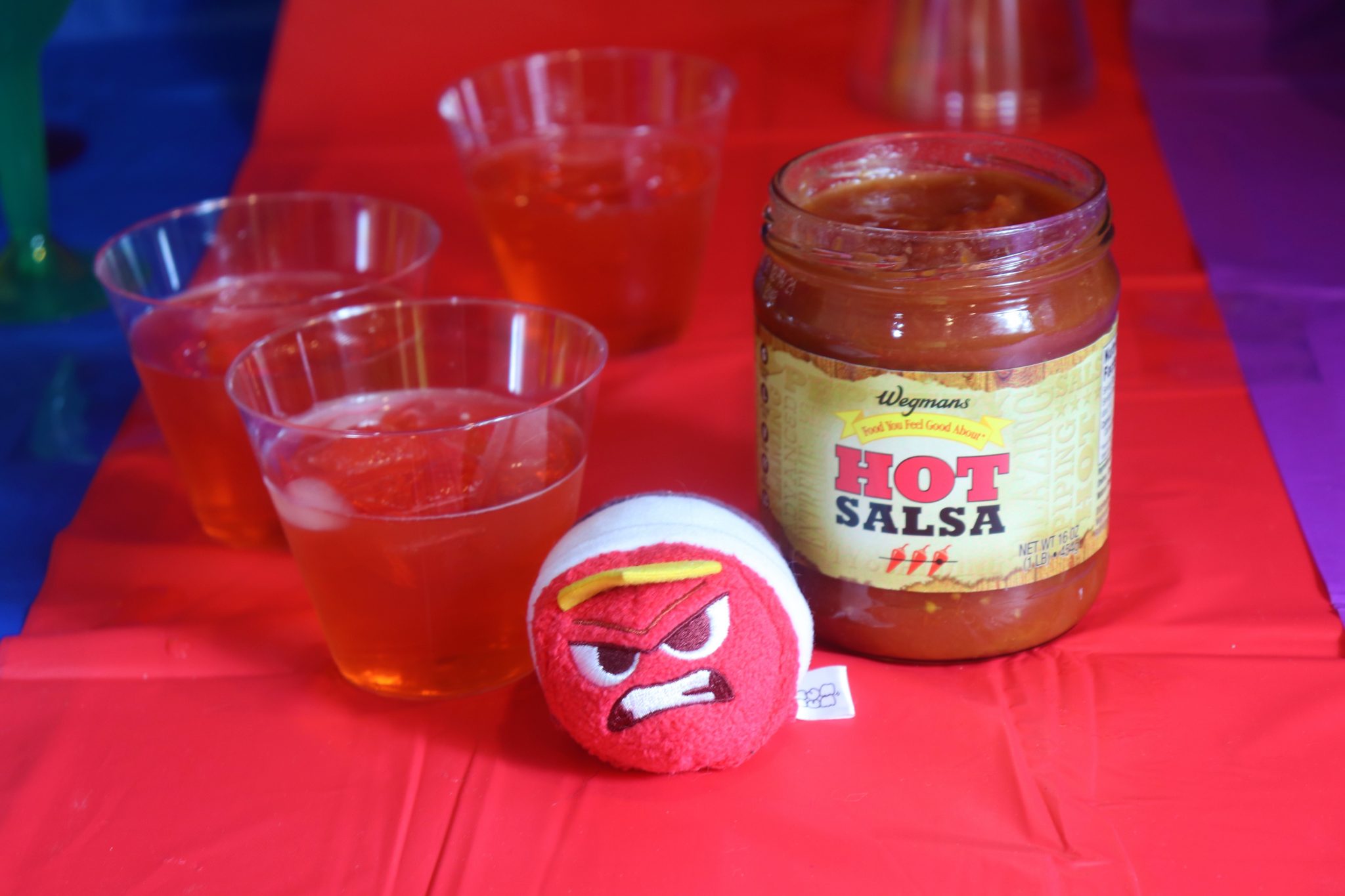 Anger needed something red and spicy! Hot salsa seemed like the obvious choice. 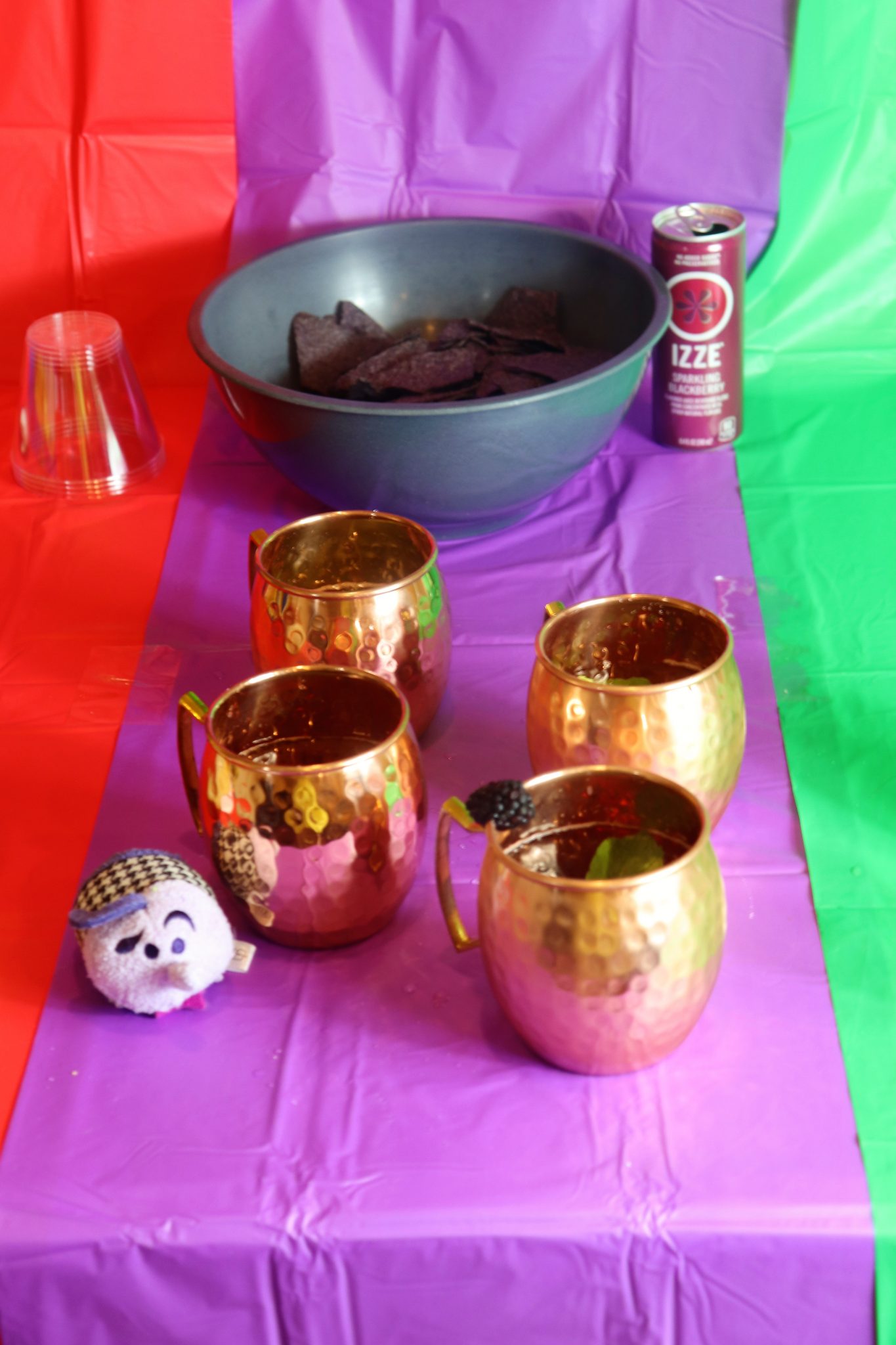 To go with the salsa of course we needed chips, and to check Fear off the list I went with purple tortilla chips. 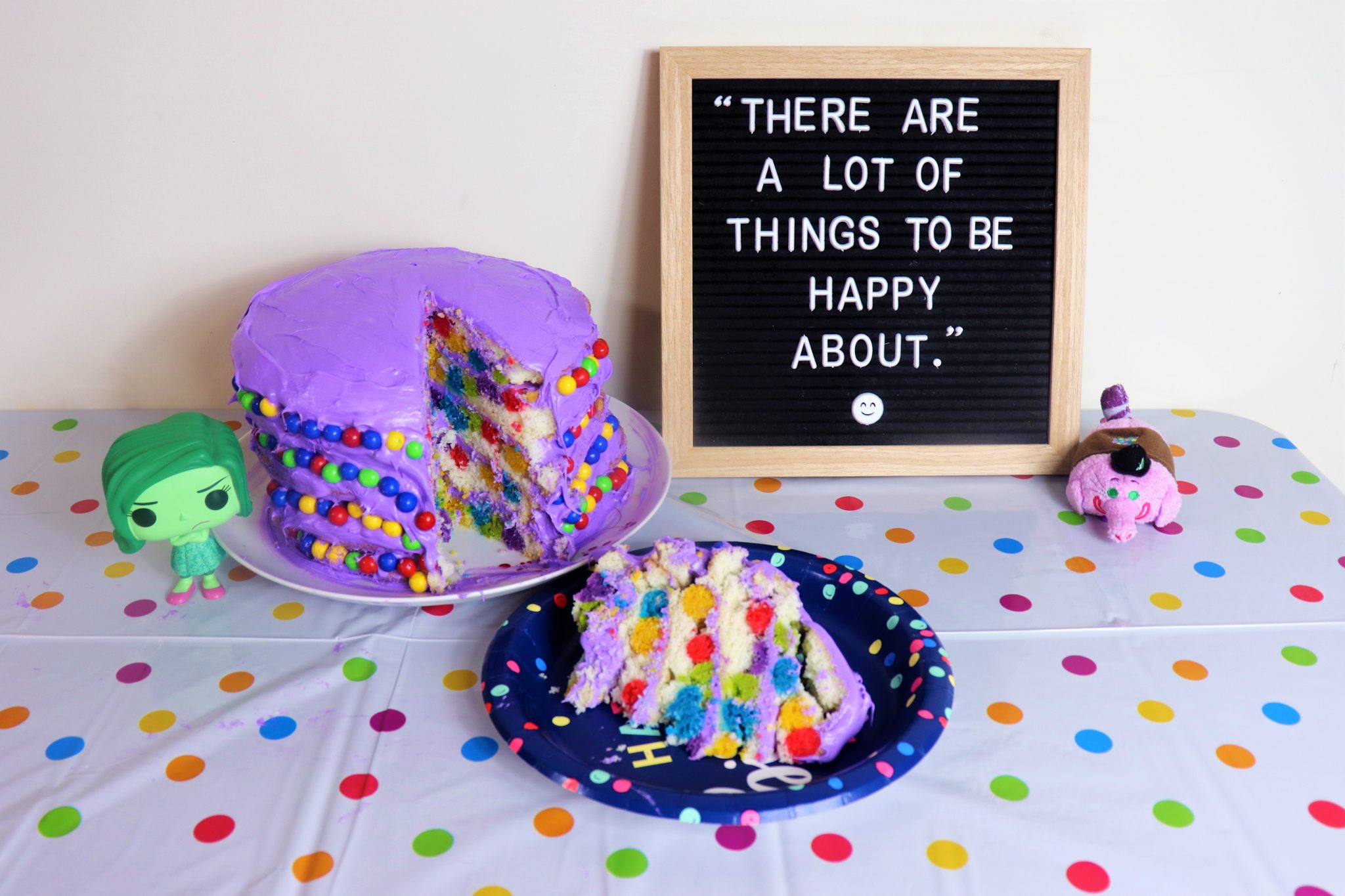 But the real big showpiece was the cake. It took a lot of time and I was worried it wouldn’t come out, but I was actually successful in making it look like rows of memory orbs were on the inside!  I decorated the outside with sixlets as well, but I was so excited when I cut into it and it actually looked somewhat like I wanted it to. I think I may do a post just on how to make the cake, because although I worked off of a tutorial I found online I made a number of adaptations that were a bit easier for a non-professional like me, and I think if someone else might want to recreate this it could be helpful. 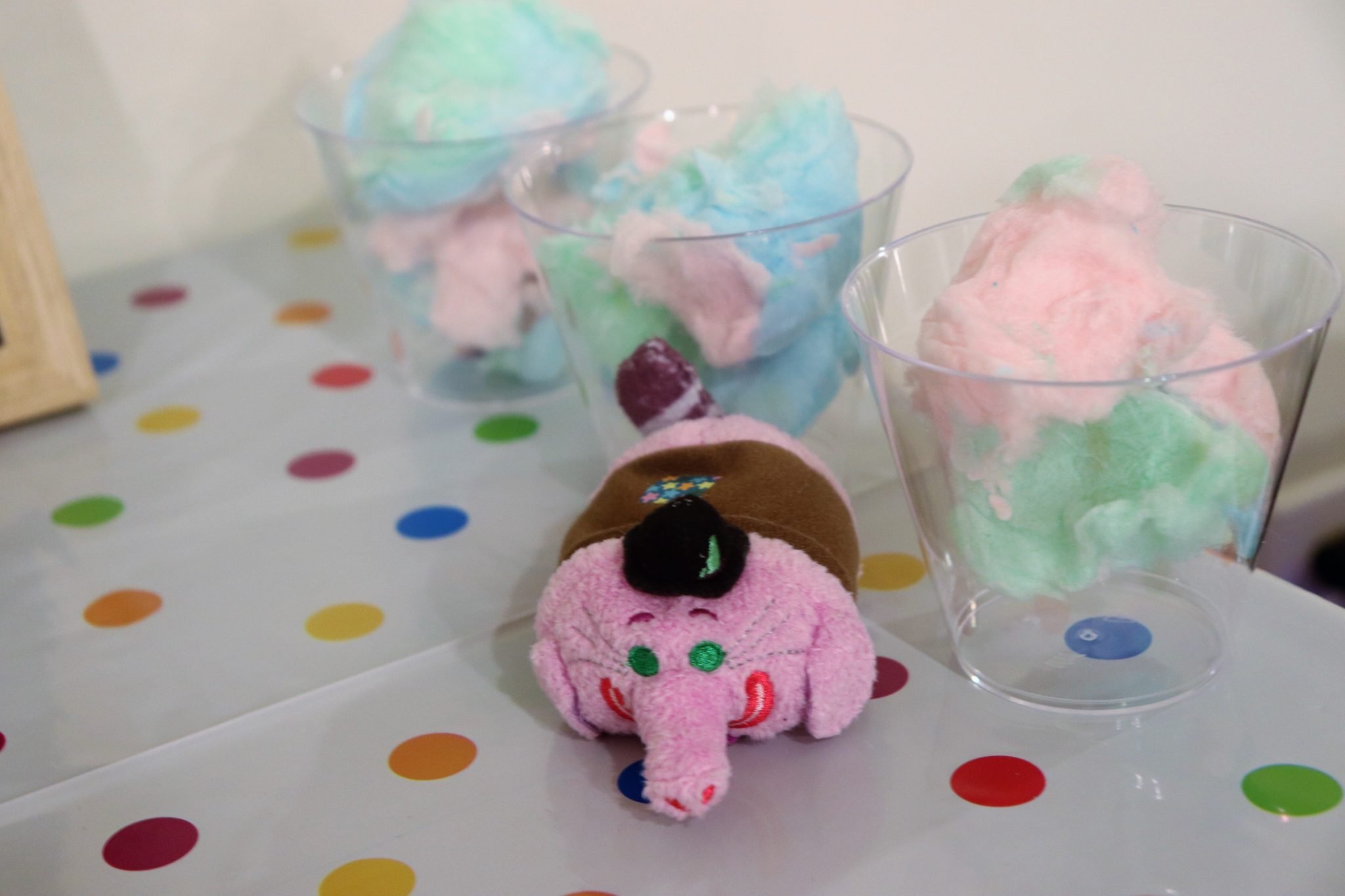 Finally – Bing Bong had some cotton candy to share with everyone! 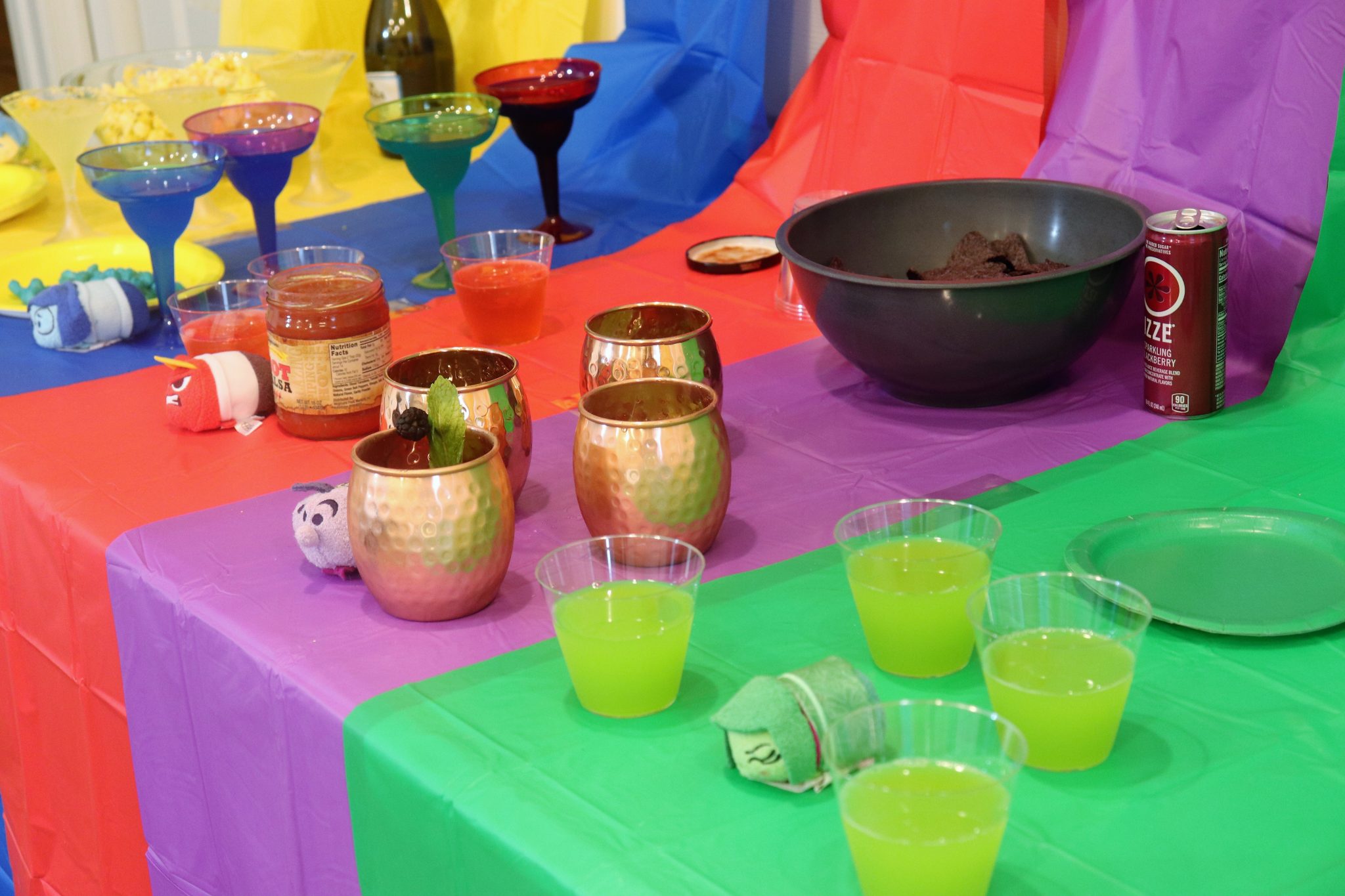 One of the things I was most excited about was creating a different colored cocktail for each of the characters. Yellow, blue, red, purple, and green!  If anyone is interested I might do a post just with the recipes I used for each of these drinks. Disgust got a green cocktail made primarily with Midori and pineapple juice, so that was the sweetest of them all. For fear I did a blackberry Moscow mule. Anger got a spicy drink based with fireball whiskey. Sadness’s drink was the biggest (and most dangerous!) hit of the night, being a blue margarita. Finally, Joy had a delightful cocktail of Prosecco and Limoncello. 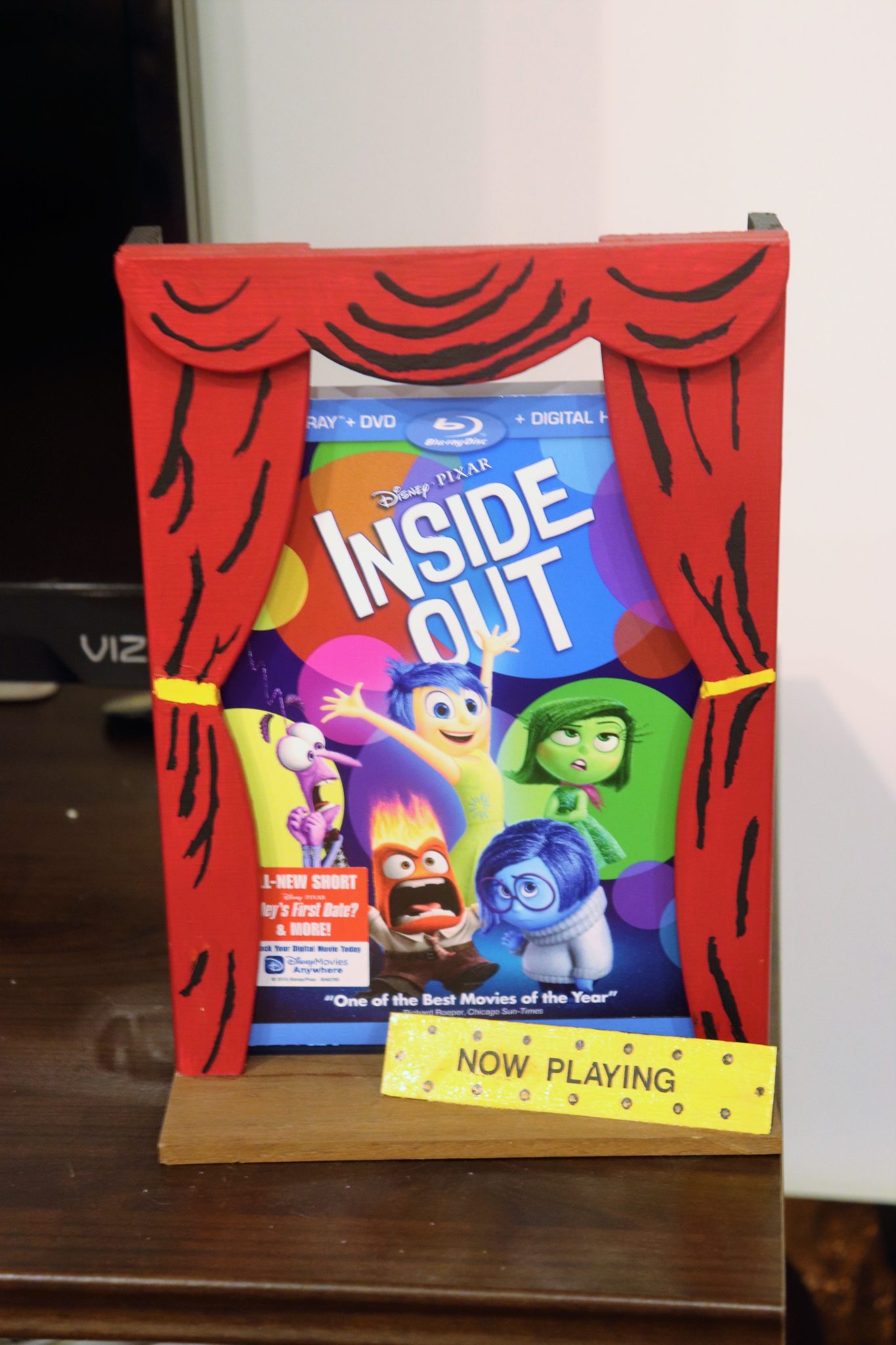 The main event was a viewing of the movie, Inside Out. Some of the party guests had seen it many times, while others were seeing it for the first time. I love this movie so much and was really glad to be able to share it with my friends and have a good time.

After the movie was over we split into a few groups to play some board games. The big Disney fans kept the Disney fun going with a game of Disney Scene It! Others played other various board games. When we got tired we decided to put on another movie and went with Beauty and the Beast. Some of us may have stayed up until 3 in the morning, but I think it was a very good night!

What would you want to eat or drink at an Inside Out birthday party?