I’m not going to lie, one of the things that I get most excited for when it comes to a Disney race is putting together a costume. I love costumes!  For the Enchanted 10k I did a simple Belle costume.  This time around, a group of friends that was going decided we should do a group costume.  We settled on Alice in Wonderland, and we had Alice, the Cheshire Cat, Mad Hatter, and Tweedle Dee/Tweedle Dum.  My costume was Alice! 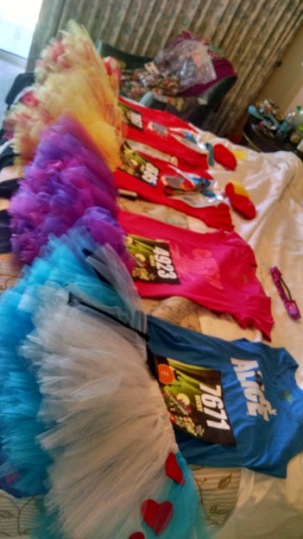 Raw Threads, which makes awesome running clothes, especially with Disney themes, was the place where most of us decided to get our shirts. They had a big Alice and Wonderland collection.  My shirt said “Alice” on the front, and I got the tank top instead of the t-shirt.  I actually got really lucky – I ordered one of Raw Threads’ mystery packs, where they sent me 3 random tank tops for a low price.  And one of the tanks I got was Alice!  These are super comfy and I highly recommend them.  You can also buy Raw Threads gear at the Run Disney expos.

In order to keep a somewhat uniform look, we all decided to go with tutus for the bottom of the costume. Many of my friends made their tutus, but because I worked with Race Junkie for a giveaway, I was super lucky to get an Alice tutu from her.  And I know that I definitely could not have done a better job!  I love the ways that the tutu has such great detail and is just so obviously Alice.  It’s blue with the white “apron,” plus some hearts attached in reference to the playing cards.  So cute, and very comfortable and easy to run in.  And of course you need something to wear underneath.  I could have worn pretty much any pair of shorts, but I decided to go with a blue running skirt I had gotten at my Sports Authority.

Then it was just time for accessories! I always wear compression socks when I run, so I went with a pair of plain white ones to match Alice’s white stockings that she wears.  For my headband, I went with a black one to match Alice’s black headband.  And everything else I tried to do blue!  I wore my blue flipbelt and even ordered a blue magic band! 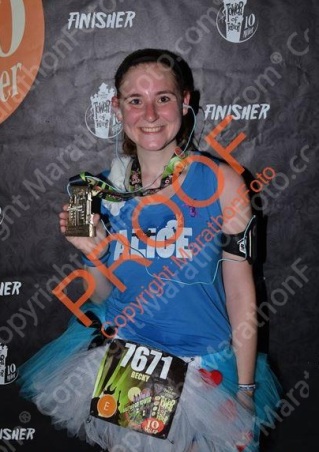 For a final touch, I pinned a ribbon to my costume in memory of my husband’s great Aunt Dot. She passed away a week before the race and her funeral ended up being scheduled for the same day as the Tower of Terror 10 miler.  I couldn’t be there with the family, but I did want to do a tribute to her in some way.

All in all it was a pretty simple Alice in Wonderland running costume to put together, but I was really happy with how it turned out! I’m already busy thinking about what I’ll be doing for the Glass Slipper challenge – I’ll need two costumes for that one!